In I.T., Mike Regan (Pierce Brosnan) is a successful, self-made man who has it all: a gorgeous wife, a beautiful teenage daughter and a sleek, state-of-the-art "smart home." But he soon finds himself in a deadly, high-stakes game of cat-and-mouse when his I.T. consultant, Ed (James Frecheville), starts using his skills to stalk Mike's daughter and endanger his family, his business, and his life. In a world where there is no privacy, and personal secrets can go viral by the click of a mouse, Mike needs to rely on his old connections to defeat a new kind of nemesis.

There's something to be said about sticking to genre formula. All a good movie or even one that is decently entertaining needs to do is hit a certain set of plot benchmarks, maybe put a unique spin on things and then it's home sailing. The final product may not be the most original flick to come down the pipeline, but it would provide a diverting 90 - 120 minutes of fun. That said, when a film - in the case a stalker thriller like 'I.T.' - fails to even hit the basic benchmarks and falls back on cliche, the final result is a long trite slog. With a star like Piece Brosnan and a writer like William Wisher attached, one would expect a spark of originality and a decent film, unfortunately, expectations aren't met by the time the final credits roll.

Billionaire entrepreneur Mike Regan (Pierce Brosnan) has life made in the shade. He's got a beautiful wife, a teenage daughter, and he's about to launch an app that will revolutionize air travel - or at last how the super-rich know it. However, things aren't completely under Mike's control. During the investor presentation of his new app, some glitches pop up requiring the expertise of I.T. wunderkind Ed Porter (James Frecheville). When Ed is able to get the presentation up and running in no time, he earns the friendly eye of Mike. When Mike needs Ed's help debugging his smart home's internal systems and wi-fi, he figures Ed is a good sort of chap for the job. What Mike doesn't know is that he's invited a cyber stalker into his home and introduced this creep to his young daughter. When Ed starts obsessively injecting himself into Mike's life, the man who once was an ally quickly becomes a nightmare.

At its surface. 'I.T.' has the makings of a traditional family stalker thriller the likes of 'Cape Fear,' 'Fear' or 'Unlawful Entry' with a dash of technological voyeurism on the level of 'Sliver.' In theory, this idea that our connected lives via internet and our obsession with social media and app-enabled smartphones would normally provide fertile grounds for a solid thriller. The problems facing 'I.T.' and why it fails on virtually every level of storytelling for this particular genre are numerous, but for starters, Director John Moore (A Good Day To Die Hard) just doesn't know how to manage the basic elements of plot and character development to make this thriller even begin to work. Much like that previously disastrous 'Die Hard' sequel, Moore pushes characters around like they're cardboard cutouts. They're never really people. The actors in question say their lines because that's what they're supposed to do, they never feel like they embody the persona they're playing. 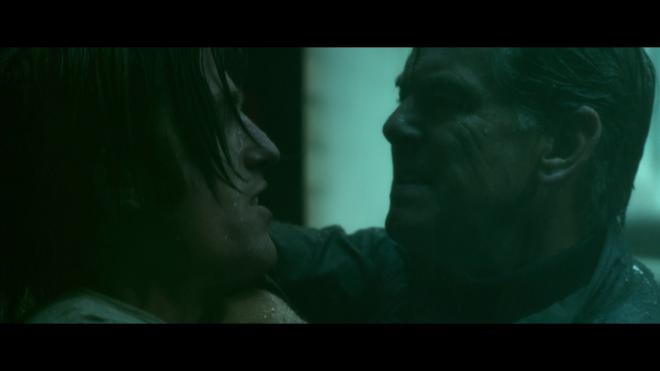 It doesn't take too long to see that Mike Regan - no matter how suave and likable Pierce Brosnan may be - is a pretty stupid billionaire. His trust of outsiders who haven't worked long in his company with his own private material and home safety is pretty laughable. Home security system? Easily hackable. Twitchy wi-fi? Doesn't call the service provider but instead brings in a total stranger with a shady past to "debug" the system. Secondary to that is James Frecheville as Ed Porter. While James does what he can with the material, his character is pretty boring by-the-numbers creepy obsessive; the sort of stereotype you picture living in their parent's basement who wastes their life trolling female celebrities on Twitter. Because Mike and Ed are such poor characters, they're easily upstaged when Michael Nyqvist's Henrik character enters the show to hunt down Ed. Had the movie been about the Henrik character from the get go, we might actually have had something worth watching.

After the character development failures, there are the film's numerous tech cliches. I wouldn't exactly call myself the most savvy individual in that regard, but I know BS when I hear it and there is plenty of bull going on inside 'I.T.' When it comes down to it, the film's understanding of internet tracking, apps, and so on sounds like someone bought a stack of Wired magazines for the headlines, but didn't bother to read the articles to get the details right. Now between the two credited screenwriters Dan Kay and William Wisher, I'm not sure where to lay the blame because it's a failing on both their parts. It's natural when writing a script that you make up a workaround when reality stops your story dead, but this screenplay's treatment of technology doesn't even attempt to create a believable sense of reality. As a result of the character failures and the technological mumbo-jumbo is a thriller that is never very thrilling or exciting.

'I.T.' arrives on Blu-ray courtesy of Image Entertainment pressed onto a Region A BD25 disc. The disc is housed in a standard sturdy Blu-ray case with identical slipcover artwork. The disc loads to trailers for other upcoming Image/RJL Entertainment releases before arriving at a static-image main menu with traditional navigation options.

'I.T.' arrives on Blu-ray with a rock solid 2.35:1 1080p transfer. This is never really a presentation that "sparkles" - largely due to the drab and cloudy Ireland filming locations. This digitally sourced presentation still manages to provide plenty of rich detail levels allowing the viewer to bathe in the smart production design work, Ed's cyber-stalker home base, in particular, looks pretty damn amazing. Black levels are also pretty decent without any crush issues to report, but at the same time, the image lacks a lot of depth in a number of scenes. Colors are on the muted scale of things though much of the film. There are a few flourishes of natural-looking colors here and there, but everything tends to dip into that steely-grey/green spectrum. As a result flesh tones tend to skew towards the sickly pale side of things, but that is an issue of intent versus this transfer.

'I.T.' enjoys a robust English DTS-HD MA 5.1 audio mix. This is a relatively quiet film for the first half of things allowing for plenty of spacious silence to fill the mix and allow some typing of keyboards or any number of electronic beeps and bops take over the scene. As the film progresses the mix becomes more action-heavy and front loaded but several sequences provide a strong and present sense of immersion and imaging as object move about the screen. Dialogue is never an issue and is clean and clear throughout. All around for a pretty tame and tepid thriller this mix gets the job done nicely.

Behind the Scenes of 'I.T.': (HD 8:06) This is your tried and true EPK interview material, really nothing substantive beyond the cursory "this is what attracted me to the film" or the "my characters is yada-yada-yada" material.

Given the talent involved with 'I.T.,' I was a bit excited to see what this techno-thriller could do. Unfortunately, it's a one trick pony and that single trick has been done better by countless other films of the same genre. Even a solid performance from Pierce Brosnan can't elevate this film out of the depths of sad cliche. RJL/Image Entertainment brings 'I.T.' to Blu-ray with a solid A/V presentation but the bonus features are sadly lacking. There just isn't much worth recommending here so unless you're pretty hard up for entertainment, I've got to suggest you skip it. The movie on its own just isn't worth the time.

Sale Price 11.99
List Price 12.99
Buy Now
3rd Party 2.48
In Stock.
See what people are saying about this story or others
See Comments in Forum
Previous Next
Pre-Orders
Tomorrow's latest releases