Love Me or Leave Me

With the release of the Judy Garland version of 'A Star Is Born' in 1954, musicals took a dark turn and began weaving highly dramatic, even tragic material into their tuneful framework. Films like 'I'll Cry Tomorrow,' 'Interrupted Melody,' and 'The Joker Is Wild' frankly address such tough topics as alcoholism, crippling disease, and mob violence. 'Love Me or Leave Me,' which chronicles the rise of singer Ruth Etting and her stormy backstage life, may not tackle a probing social issue, but still fits snugly into the niche by examining the heartache, strife, and disillusionment that often go hand-in-hand with show business success. Distinguished by top-flight performances from Doris Day and James Cagney and a bucketful of recognizable melodies, this glossy MGM musical nicely balances drama and song, and paints vivid, dimensional portraits of two driven, tortured people.

Though hardly a household name today, Etting was a big deal during the 1920s and '30s, appearing on stage - most notably in the Ziegfeld Follies - and on screen in a series of musical shorts that showcase her vocal talent. (A couple of those vintage two-reelers are included in the special features section of this disc [see below], and her recordings are readily available on iTunes.) Known as "America's Sweetheart of Song," Etting produced more than 60 hits during her 15-year career, and her versions of such standards as 'You Made Me Love You,' 'Shakin' the Blues Away,' 'Ten Cents a Dance,' and the film's torchy title tune stand the test of time.

Life, however, wasn't as rosy for Etting outside the spotlight, and her abusive, codependent relationship with her pugnacious manager, Martin "The Gimp" Snyder, forms the central focus of director Charles Vidor's film. A Chicago gangster with a lame leg who falls hook, line, and sinker for Etting (but never receives the affection he craves in return), Marty demands loyalty, devotion, and respect, as well as a sexual payback for launching and helming Etting's career. At first, the indignant singer rebuffs his advances, but soon gives in, and silently condones the corrupt practices and obnoxious bullying that help her climb several rungs on the professional ladder.

Yet after achieving a modicum of renown and reveling in the luxurious trappings that accompany it, Ruth begins to wonder whether the price she paid for success was worth it. Disgust over her distasteful liaison with Marty and his lack of professional decorum begin to gnaw at her, but she still feels both indebted and beholden to the diminutive dynamo she pities and fears. His controlling, possessive attitude and rampant pigheadedness drive her crazy...and eventually into the arms of her earnest, supportive accompanist, Johnny Alderman (Cameron Mitchell), who sees Ruth as a person instead of a commodity. Marty's abrasive qualities also alienate those who employ Ruth, including Ziegfeld, and spawn a destructive jealous streak that ultimately leads to violence.

Like many biopics of the era, 'Love Me or Leave Me' is highly fictionalized - Etting was reportedly appalled by some of the liberties taken with her story - and a bit sanitized, but it gets the basic conflict right. Both Day and Cagney pull no punches in their respective portrayals, and their palpable chemistry ignites the screen. Day walks a difficult tightrope, appearing starry-eyed and radiant one minute and sullen and bitter the next, but deftly merges the two moods and contributes what is widely regarded to be her finest work. (Many were surprised she didn't receive an Oscar nomination.) Sadly, few other dramatic roles followed, a disappointing fact that Cagney rues in his autobiography. "After 'Love Me or Leave Me,'" he writes, "Doris went into the 'Pillow Talk' things, and I for one have always considered that one hell of a waste."

She also would make only two more musicals - 'The Pajama Game' and 'Billy Rose's Jumbo' - and that's a shame, too. Day had a beautiful voice, richer and fuller than Etting's, and her renditions of all the songs in the movie are sincere, spirited, and magnetic. ('Ten Cents a Dance' is especially striking, and featured prominently in 'That's Entertainment, Part 2.') Unfortunately, the staging of the numbers is rather static. Only one - 'Shakin' the Blues Away' - merits a full-blown production. The others are devoid of visual panache (most of the time, Day just stands in one place and sings), thus interrupting the film's flow and stalling its narrative progression. Thankfully, Day holds our attention and manages to bridge the gap, but more creativity would lend the movie more flair.

Cagney nabbed a Best Actor Oscar nod for his colorful portrayal, which recalls the larger-than-life gangsters he played during his glory years at Warner Bros in the 1930s. Though the role is largely unsympathetic, Cagney manages to shade it with some pathos and a smattering of trademark charm, which help us understand his insecurities and why Ruth chooses to stay with him for so long despite his atrocious behavior. As Cagney aged, an attractive vulnerability often crept into his work, making him more relatable and his performances more affecting. Marty "The Gimp" Snyder would be one of his last great parts, and he plays it to the hilt.

'Love Me or Leave Me' garnered five other Academy Award nominations, including one for Best Screenplay, and won the Oscar for Best Original Story - a bit laughable because it's based on someone's actual life. Other MGM musicals certainly eclipse it, but 60 years after its initial release, Vidor's film remains a high-class, impeccably mounted production that keeps us involved from beginning to end. Though the true-life elements may no longer be relevant (sorry, Ruth Etting), Day and Cagney always will be, and for both of them, this movie is a career highlight. 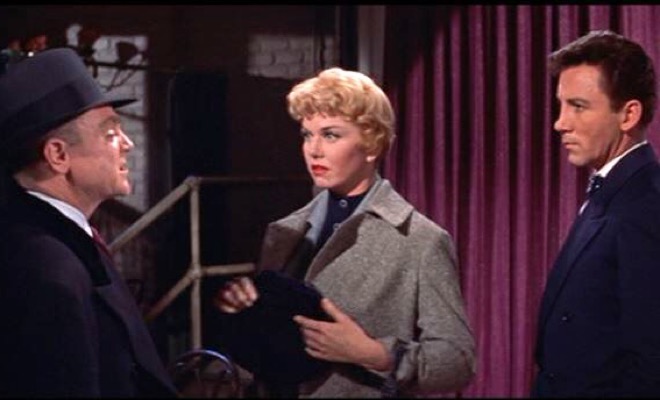 'Love Me or Leave Me' arrives on Blu-ray packaged in a standard case. Video codec is 1080p/AVC MPEG-4 and audio is DTS-HD Master Audio 5.0. Once the disc is inserted into the player, the static menu with music immediately pops up; no previews or promos precede it.

Warner released 'Love Me or Leave Me' on DVD back in 2005 and provided a lovely transfer, but this 1080p/AVC MPEG-4 rendering definitely improves upon it. The image flaunts a richer look, more vibrant color, and enhanced clarity and contrast that really make the picture come alive. The previous transfer sported only a few errant nicks, but those have been meticulously erased, however the pleasing grain structure remains, and the result is a lush, film-like presentation that's distinguished by fine details, wonderful texture, and palpable depth. Inky blacks and crisp whites lend the image weight and balance, and flesh tones remain stable and true throughout. Shadow delineation is quite good, crush and noise never crop up, and any digital doctoring has been seamlessly incorporated into the frame. Though the previous DVD transfer still holds up, this excellent high-def remastering should spur fans of this classic musical to upgrade.

The previous DVD included a Dolby Digital mono track, but this Blu-ray edition ups the ante with a newly remastered DTS-HD Master Audio 5.0 track that supplies clear, beautifully modulated sound that really comes alive during the musical numbers. Superior fidelity and tonal depth complement both Day's mellifluous vocals and the lush orchestrations that frame them. Though surround activity is faint at best, noticeable stereo separation across the front channels expands the soundscape, lending both dramatic and musical scenes greater scope and impact, while a wide dynamic scale handles all the musical highs and lows without a hint of distortion. Nuances come through nicely, all the dialogue is easy to comprehend, and no age-related imperfections like hiss, pops, or crackles muck up the mix. Musicals especially demand high-quality audio tracks, and this one earns solid marks across the board.

Sadly, Ruth Etting may be forgotten, but Doris Day's searing portrayal of her lives on in 'Love Me or Leave Me.' Day files arguably her finest performance in this dark yet tuneful musical biopic that also features a mesmerizing turn by James Cagney. Though the musical numbers may be a bit subdued, the blistering intensity of the dramatic scenes and magnetism of the stars keep the movie afloat. Warner Archive's Blu-ray presentation features top-notch, newly remastered video and audio transfers, as well as a few interesting supplements, a couple of which showcase Etting herself. 'Love Me or Leave Me' may not rank among MGM's greatest musicals, but it's a classy, engrossing production that's worthy of both a recommendation and an upgrade for those who own the previous DVD edition.

Sale Price 17.99
Buy Now
3rd Party 17.92
In Stock.
See what people are saying about this story or others
See Comments in Forum
Previous Next
Pre-Orders
Tomorrow's latest releases