In the 1950s, Tab Hunter is number one at the box office and number one on the music charts. He is Hollywood's most sought-after star and America's boy next door. Natalie Wood, Debbie Reynolds and Sophia Loren are just a few of the actresses he is romantically linked to. Nothing, it seems, can damage Tab Hunter's career. Nothing, that is, except for the fact that Tab Hunter is secretly gay.

Movie stars rise and fall with the sun. One day a particular actor or actress is the hottest thing on the scene, the next they're yesterday's news, barely managing to scrape together a living. This happens so often that fans rarely take the time to find out what happened to their favorite stars because there's always someone new to pay attention to. Sometimes it comes from simply being burned out from working the business side of Hollywood. Sometimes it's due to a health issue or an addiction that consumes them. Other times it's because the person in question simply isn't able to live their life freely without risking his career and livelihood. Such is the case for the iconic dreamboat Tab Hunter. A man who was tops on the movie house marquees tops on the billboard charts and had young women swooning over him night and day, But he had a secret so damaging it would have destroyed his career. Tab Hunter was gay.

'Tab Hunter Confidential' is comprised of interviews with the men and women who know Tab, worked with him in films, dated him, and most importantly - knew who he really was. Before Tab was "Tab" he was born Art Gelien. He was raised by his strict catholic single mother alongside his older brother Walter after they left his abusive father. Tab grew up to become a dreamy tall blonde adonis with the kind of face that movie promoters love to toss up onto billboards to sell their films to young women.

Tab was like a blank check waiting for Hollywood to cash him in. The problem was Tab wasn't like other young men. He knew he wasn't like other boys growing up. He knew he was a little different. No matter how much he tried to be "normal" he couldn't turn away his feelings. He had his faith as a catholic to hold onto, but one day after a terribly received confession, he turned away from religion. Tab was a gay man in the 1950s. "Gay" or "homosexual" weren't even the polite words used to describe men like Tab and being one of "those people" was considered a criminal act. After he was arrested at a homosexual party, Tab had to protect himself and his image if he was ever going to have a career in Hollywood. He was going to have to live as a completely different person. 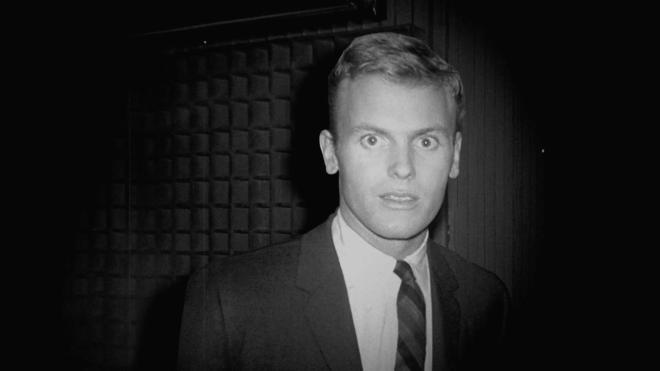 Hearing these stories second hand from the likes of Robert Wagner, George Takai, John Waters, or Debbie Reynolds would have been painful and heart-wrenching on their own, but to hear Tab tell them himself is almost tragic. He tells these stories very matter of factly, honestly and without much in the way of remorse or regrets. At 85 years old, it's very clear that Tab has made peace with his past and the rise and fall and late resurgence of his career. It's his candid nature that makes this documentary so appealing. It's an honest and straightforward look at a man's career as Hollywood's golden boy and how his hidden lifestyle had an impact on who he was deep down.

The stories Tab has to tell are fascinating. Not in a way that one might skim through the tabloids for salacious scandalous details, but more in a way similar to opening a time capsule. As a child of the 1980s, I knew Tab better for his later efforts starring in John Waters' 'Polyester' and his television work. I knew he did a beach movie in the late fifties, starred in a few westerns and did the occasional thriller, but I never really knew anything about the man. So on that level, hearing his life story was an interesting eye opener to an era I didn't experience personally. I had no idea that in addition to making him the teen idol to millions of young women, Jack Warner also started Warner Records to help promote his budding singing career. And it was also Jack Warner who kept the press cooling their heels with fictitious stories about Tab's personal life. Once Tab made the decision to end his contract with Warner - all of that protection disappeared, along with his career.

As 'Tab Hunter Confidential' unfolds chronologically, we fallow the young Tab's rise to the upper echelon of Hollywood stars, his brief hidden relationships, his longterm affair with Anthony Perkins, as well as his need to appear as a virile heterosexual man by dating Natalie Wood and other young starlets. I'm reluctant to go into too much detail about how things progress, a quick look through on Wikipedia will tell you as much, but I feel that it's important to let Tab tell his story. It's a good one. I rarely go in for this sort of bio-documentary with a single subject, they can just feel like vanity projects more often than not. 'Tab Hunter Confidential' feels different. It feels more honest and informative rather than someone looking to recapture the limelight. This is probably because Tab appears as if he'd rather be anywhere else in the world than in front of a camera talking about his private life. He's honest about who he is and his work, but he's not someone obsessed with fame if anything he sounds rather annoyed by it now. Since he was a former megastar, his desire for privacy could be why he's such a compelling subject. Even if you're not much of a fan of Tab's films, 'Tab Hunter Confidential' is certainly worth watching. At the very least you should come away feeling like you learned something new about that shady age of Hollywood when the contract system was alive and well and talent was bought and sold like cattle.

'Tab Hunter Confidential' arrives on Blu-ray courtesy of FilmRise. Pressed onto a BD-R25 disc, the disc is housed in a standard Blu-ray case. The disc opens directly to an animated main menu with traditional navigation options.

'Tab Hunter Confidential' arrives on with a strong 1.78:1 1080p presentation. This film is your typical sitting interview subject sort of documentary. These scenes look fantastic and offer bold and natural colors with great detail levels. Depth really isn't much to speak of because the background is usually out of focus. Interspersed between these segments are clips of films Tab Hunter was in, some personal pictures, and some magazine covers and photo spreads. The still images look great, but the film clips are a notable dip in quality. Some look to have been sourced from standard definition masters and a couple look like they were pulled from VHS tapes or studio broadcast tape masters. These shots don't tend to linger long because they're only intended to show Tab in action so this quality shift really isn't much of a deal breaker. All around this is a very good presentation.

'Tab Hunter Confidential' arrives with a serviceable if unremarkable Dolby Digital 5.1 audio track. Since 99% of the audio features a talking subject, dialogue is the focus and keeps to the front/center channels. Music and some sparse sound effects keep to the sides without much surround activity. Honestly, without knowing otherwise I would have just assumed that the film was a stereo presentation. Imaging isn't all too dynamic as there really isn't much need for it. For what it is, this audio mix works, it's just nothing special or dynamic.

Worth noting, there is a frustrating area around the 40-minute mark of the film where French actress and co-star Etchika Choureau is interviewed. She only speaks French and no subtitles were embedded for this scene. When you turn subtitles on all it says is "Speaking French." You can more or less infer what the context of the scene is, but it's a bit irritating subtitles weren't provided for that segment.

Bonus Interviews: (HD 36:27) This material is comprised of interview material from Tab Hunter, John Waters, Debbie Reynolds and others. It's understandable why this material didn't make the final cut, it doesn't really contribute to the main story, but it's still pretty great material and I'm glad they included it.

It's always interesting to learn about an era of Hollywood that has long past. It's especially interesting when it involves a figure like Tab Hunter - a man who was sold to the world one way but was always someone different on the inside. 'Tab Hunter Confidential' is a fascinating film, to say the least. Even if you're unfamiliar with Hunter's work, this is absolutely worth watching. FilmRise brings the film to Blu-ray with a fine transfer and a serviceable audio mix. The extra interview footage makes for a nice little bonus feature. Considering it was such a fascinating film, I'm left to call this release as worth a look. Even if you're not interested in owning the film, it's absolutely worth seeing.