Have you ever plugged in a movie where you're instantly struck with the notion that the filmmakers had no idea what movie they were making, and yet, you're perfectly okay with that? Granted a film is never finished at the screenwriting phase, it takes shape over time, and even during shooting a writer could be cranking out new pages filled with new plot twists and turns. It happens to the best of movies - and the worst. Now, I have no idea what behind the scenes hijinks happened on the set of 'Metalstorm: The Destruction of Jared-Syn' - but this movie suffers from some tough dialogue, wooden acting, cheap sets, and a nearly incomprehensible plot. That's okay, the movie is a riot from start to finish and is made all the better in 3D!

Dogen (Jeffrey Byron) is a Ranger - Finder Class on a mission to end the reign of death and terror caused by the diabolical Jared-Syn (Micahel Preston). Jared-Syn is hell-bent on taking control of a distant planet using ancient crystals to harvest the life force of the innocent people. With his Son Baal (R. David Smith), Jared-Syn is dangerously close to forming an alliance with the cyclopean Hurok (Richard Moll) and his people to fight the peaceful nomads that would allow him to ultimately take control of the planet. In order to find Jared-Syn, Dogen must get help from the beautiful Dhyana (Kelly Preston) whose father was killed by Baal as well as the burnt out former Ranger Rhodes (Tim Thomerson). Armed with an all-powerful crystal, Jared-Syn may be too powerful for Dogen to stop.

When I was a kid, 'Metalstorm: The Destruction of Jared-Syn' was on television all the time. It felt like every other weekend my favorite local station was showing it after their horror movie double feature on Saturday afternoons. The movie's plot didn't make sense to me when I was a kid, and honestly, it doesn't make much sense to me as an adult. But that's okay - it's still a ton of fun. It's hard not to enjoy this film's low-budget charms. Most of the film is shot in and around a single area that looks like an abandoned rock quarry. When they need a new set it looked like they just turned the camera around and all of a sudden our characters are in a completely different area. But then again, what else would you expect from legendary cult director and producer Charles Band? The man is a magician when it comes to creating a big looking movie on a tiny budget. 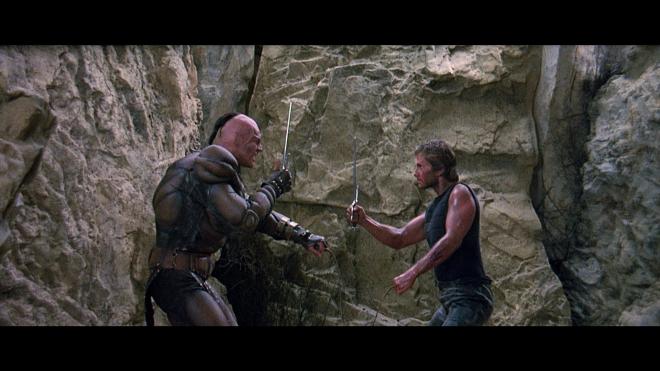 What I loved about this movie as a kid and still do to this day is the crazy makeup work and costuming. I always loved the cycloptic Hurok. Even though it's kind of funny realizing now that Richard Moll of 'Night Court' fame was this big bad cyclops with a melted face, but I ate it up as a kid. Especially the fight he gets into with Dogen. I still don't understand the honor rules of two guys with daggers tied to each other with a string in a pit, but what the heck, why over think it? On top of the cyclops, the costumes of this movie are a real kick. They look like 'Road Warrior' cast offs meet the monsters from 'The Power Rangers.'

The cast lead by Jeffrey Byron does what they can with the slim material. You've gotta hand it to them for doing what they can with some pretty tough dialogue. None of the conversations feel organic or well thought out. When you have exchanges like "Will you help me find Jared-Syn?" "My father is dead." you have to chuckle just a little bit at the nonsequiturs. Kelly Preston does her best as Dhyana, but she has little to do and is absent for nearly half the film while Jeffrey Byron's Dogen and Tim Thomerson's Rhodes pal around for forty minutes as they try to find an ancient mask. To that end, Thomerson is great as the comedy relief. I'm not exactly sure why his character is even necessary to the film, but he chews the scenery with the best of them. Speaking of scenery chewing, you can't talk about performances without mentioning Michael Preston's Jared-Syn. Preston is doing his best to exude villainy but with that skunked hair style and gigantic foam rubber costume, it's hard to take him seriously for long - especially when he starts killing people with red glowing crystals.

Seeing this movie in 3D is a real joy. With all of the crazy shots and visual effects work, there is a fun sense of dimension and depth. Especially every time R. David Smith's Baal sticks his metal arm out at the camera and sprays his weird green acid goop onto some poor hapless soul. Then you have the climatic chase sequence. If you haven't seen this prolonged seemingly inconsequential scene the less said the better. You gotta watch it for yourself. If you haven't put your feet up to enjoy the movie by this point, you will and you'll be happy you watched it this far. As the film was clearly intended to launch a franchise, I can't tell where the filmmakers thought it could go, but I've got to give Band and his writer Alan J. Adler credit for giving it their best shot. 'Metalstorm: The Destruction of Jared-Syn' is a great example of low-budget 80s cheese at its finest.

'Metalstorm: The Destruction of Jared-Syn' arrives on Blu-ray courtesy of Scream Factory. As a two-disc Blu-ray set, the 2-D and 3-D presentations are given their own Region A locked BD50 discs to occupy. Both discs open directly to static image main menus with music from the film playing in the background and feature standard navigation options. The discs are housed in a standard 2-disc Blu-ray case. All bonus features are located on the 2D disc.

Given that 'Metalstorm: The Destruction of Jared-Syn' is a low-budget 1980s 3D gem, the respective 2D and 3D 2.35:1 1080p transfers are both cases of about as good as can be expected. That isn't to say they're overly problematic or are riddled with any age-related anomalies, it's just that this film can show it's age. In 2D, the image retains a strong amount of film grain providing the image with some great detail levels. Film grain can get a bit noisy where optical effects were used and there is a fair bit of flicker when some slow motion photography was used. During these sequences, black levels can shift a bit causing some crush and loss of depth. Colors are bright and bold with plenty of primary pop. Flesh tones can tend to look a little browned and tanned but still pretty natural looking. The print sourced for this 2D transfer appears to be in pretty good shape without any notable scratches or speckling to mar the presentation. 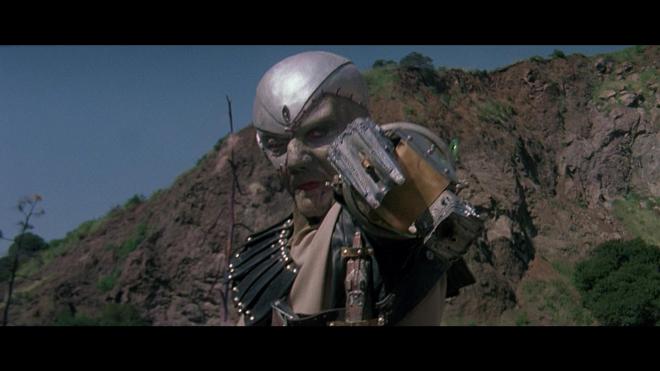 In 3D, this 2.35:1 presentation is flawed, but again, about as great as it can look considering the circumstances. Before the film begins, a title card comes up explaining that every effort was made to clean up the print and provide the very best possible restoration of the film in 3D. To that end, I would believe it. When the 3D works, it's beautiful, when it doesn't it's a clear sign that the 3D elements may have been in pretty rough shape. This is when some odd ghosting and crosstalk pop up and can really scramble the eyes. Thankfully these moments are relatively short, but it can make it hard to create a comfortable viewing experience when the focal plane keeps shifting. Again, this isn't a terrible problem, but it's enough that some viewers may be put off. When this 3D presentation is at its best is during moments like when Dogen is zipping around on his dune buggy or when Baal points his metal arm at the screen. These moments offer some great pop-out-of-the-screen 3D as well as some deep Z-axis depth. Considering the state of some other 80s vintage 3D films like 'Amityville 3-D' or even the somewhat problematic presentation for 'Jaws 3-D,' there really is very little to complain about for 'Metalstorm: The Destruction of Jared-Syn.'

Both the 2D and 3D presentations of 'Metalstorm: The Destruction of Jared-Syn' comes packed with an English DTS-HD MA 5.1 and a DTS-HD MA 2.0 audio tracks. When you get right down to the nitty-gritty of it, the DTS-HD MA 2.0 track is the better of the two options. While the 5.1 mix does a good job of providing a sense of space and atmosphere and some solid direction during action sequences, a lot of the dialogue can be tough to hear. This is in part because so many lines in the film are mumbled or whispered - especially a large amount of what Michael Preston's Jared-Syn has to say. He's chewing so much scenery in places that he forgot to enunciate and project his voice. So for those reasons alone I'm favoring the 2.0 over the 5.1 mix. Even with a better balance between the dialogue and sound effects, it still can be pretty tough to hear what is being said, but that is a baked in issue and not a fault of the mix. To that end, whichever audio mix you choose to listen to, you're going to have to keep a thumb on the volume. Thankfully both audio tracks are free of any age-related issues and don't suffer from any hiss or dropouts. The big action sequences and the final chase offer some really immersive auditory whizbang for this cheesy gem of a movie.

High Noon At The Edge Of The Universe: (HD 42:13) This is a pretty great making of feature talking about how 'Coming At Ya!' lead Charles Band making 'Parasite' and then managed to get funding for this film. Cast and crew offer a lot of insight into the film and it's fun to see how this movie came together.

Theatrical Trailer: (HD 1:23) A nice cheeky trailer, also makes you appreciate the restoration effort that went into the final film.

'Metalstorm: The Destruction of Jared-Syn' is hardly the best film ever made, but it is awesome cornball fun. I was always entertained as a kid by this one and it and I had a blast rediscovering it as an adult - and now I can fully appreciate it in 3D! Scream Factory does a standup job with this release delivering the best possible 2D and 3D presentation. The 3D may not be perfect, but it is still pretty good and offers a lot of kitsch value to the movie. With a solid A/V presentation as well as a very good making-of bonus feature, I've got to call 'Metalstorm: The Destruction of Jared-Syn' recommended. Again, it's not a "good" movie in the traditional sense, it's just endlessly entertaining for 84 minutes which is all you can ever ask for from any film.

Sale Price 17.99
List Price 34.93
Buy Now
3rd Party 13.99
In Stock.
See what people are saying about this story or others
See Comments in Forum
Previous Next
Pre-Orders
Tomorrow's latest releases