It looms up out of the woods like a dormant beast. Grand, imposing... abandoned and deteriorating, the Danvers State Mental Hospital, closed down for 15 years is about to receive 5 new visitors. Donning protective gear, the men of the Hazmat Elimination Co. venture into the eerily vast and vacant asylum that is filled with an evil and mysterious past. Rampant patient abuse, medieval medical procedure and rumors of demonic possession are some of the many dark secrets the hospital holds - but then so do each of the men.

Atmosphere, mood, location, can often trump all other essential elements when it comes to crafting an effective and unnerving thriller. These elements can even outweigh the importance of clean, well-drawn characters played by talented actors. While having these characters is absolutely essential, that sustained sense of ambiance and dread can make or break the final product. Such is the case with Writer and Director Brad Anderson's breakout independent horror/thriller 'Session 9.' While the film features a talented cast of actors such as David Caruso, Josh Lucas, Peter Mullan, and Stephen Gevedon, it's the film's location of an actual dilapidated former asylum that carries the film, drives the story forward, and builds the constant sense of dread and paranoia.

It was supposed to be a simple job. Get in there, strip out the asbestos, make a quick bonus check, and then go home happy and a few thousand dollars richer. For Gordon (Peter Mullan), his partner Phil (David Caruso), and his asbestos abatement crew Mike (Stephen Gevedon), Jeff (Brendan Sexton III) and Hank (Josh Lucas), that's what cleaning out the old Danvers state asylum should have been. But the stakes are high. As Gordon is a new father, he's also facing the collapse of his business as he has a harder and harder time outbidding the competition. In order to secure the gig from the property manager Griggs (Paul Guilfoyle), Gordon has to cut a lot of corners. A job that should be done in at least three weeks, no less than two, must now be done in one week. However, if everyone comes together, busts their backsides and gets the work done, they get to split a $10,000 bonus. That should be the motivation to ensure the job gets done right.

As the crew gets down to work, problems start to arise. Internal personal difficulties start to dominate the work as does the creepy and unsettling location. The asylum's sordid history comes to light when the crew discovers old audio recordings of a patient named Mary Hobbes. When the recordings reveal an assortment of personalities contained within one woman, the crew start to experience strange things. With the pressure on, with Gordon's stress at its peak, tools, personal effects, and members of the crew start to go missing, it's clear to the men that the asylum holds deeper and darker secrets than the ones reported in the media or recorded on those eerie tapes. 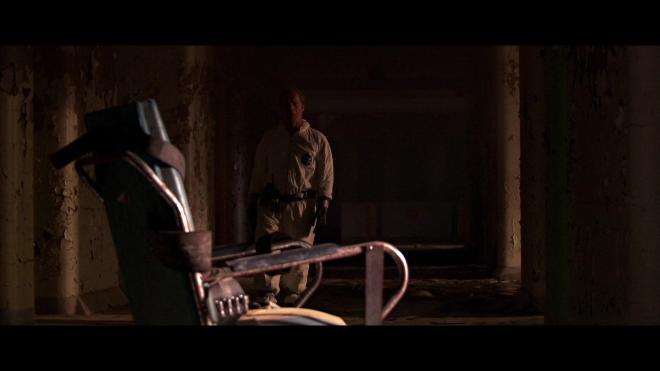 'Session 9' is a study in dark, disturbing, and methodical independent horror cinema. Rather than cow-tailing to modern conventions of quick splatter gore and parody, the film takes its time to build dread. Characters are slowly introduced one by one. We get the time necessary to learn who each man is, what their personal needs are, and how the stakes of their work conditions affect them. We get it that Gordon has a new kid and a family to feed on top of running a business. We know Phil needs job security but doesn't want to risk job safety. We learn pretty quickly that Hank hates his work and has an exit plan. It's obvious Jeff is there for a quick buck and nothing else. We know that Mike is smarter and better than the work he's doing and probably shouldn't even be there. While any number of modern horror thrillers would trade this time of slow and proper character development for in your face gore, 'Session 9' does things right and gives the audience time to care about the people they're going to watch for the next 100 minutes. On top of showcasing the characters, 'Session 9' is also introducing the audience to the asylum allowing the creepy dilapidated building to become a unique character unto itself.

'Session 9' popped on my radar as an underground video hit way back when it was released in 2001. While it enjoyed a small theatrical run, it didn't make its mark until it hit DVD. It's odd to look back at only 15 years ago as a long time, but it really is. At that time, DVD was a booming home video format. If a film didn't make the bucks in theaters, it could still be counted on turning some sort of a profit on disc through rentals or sales. A random rental was how I stumbled my way towards discovering this unnerving flick. I didn't know what I was going to get, I just read the description on the back and thought it could be cool. I didn't expect to see a movie that depicted a genuinely disturbing descent into madness. It didn't help that I watched this alone in my dorm room late at night with the lights off. That was a big mistake then, and it remains a big mistake to this day. Even going into this review knowing the twists and turns and what to expect when and where I was glad to see the film maintains this ominous sense of dread and suspense all these years later. I expected this recent viewing to betray some sort of script issue or plot device that destroys the film, but it doesn't exist. Brad Anderson's smart direction and his script cowritten by Stephen Gevedon holds up under scrutiny. I wouldn't call it a perfect film by any means, but I do consider it a smart and creative flick that used its meager means and established locations incredibly effectively. If you've never seen 'Session 9,' you owe it to yourself to give the flick a look - especially with the lights out!

'Session 9' arrives on Blu-ray courtesy of Scream Factory. Pressed onto a Region A BD50 disc, the disc comes housed in a standard Blu-ray case. The film opens to the traditional Scream Factory logo into before arriving at a static image main menu with some incredibly creepy music from the film playing in the background. The menu features traditional navigation options.

As one of the first theatrically released films shot using Sony's then state-of-the-art 24p HD digital cameras, 'Session 9' features a 2.35:1 1080p transfer that should be considered "about as good as it can get." This digitally sourced image is a showcase of technological limitations of HD cinematography before it was as readily used as it is today. While the image showcases some great clarity, fantastic depth, sharp details, radiant colors, and some solid black levels, it also comes prepackaged with all of the unfortunate "video" side effects. Motion blur, some aliasing, slight banding, and fluctuating brightness levels creep up from time to time. One can't really call this a fault in the Blu-ray transfer because this film has always looked this way. While some may not enjoy the "video" look of the film, it adds a documentary sort of vibe to the film. The HD video camera also allowed the filmmakers to shoot using natural light making the mood of the film that much creepier when you can tell that during certain scenes only a flashlight was used to light a dark and creepy corridor with something - or someone - lurking in the distance. To that effect, this transfer is likely the best this movie will ever look on home video and by doing some quick comparisons is leaps and bounds better than its DVD counterpart.

With an English DTS-HD MA 2.0 audio track, 'Session 9' maintains a disturbing and unsettling auditory presence. I was actually surprised that this film wasn't given a full 5.1 upgrade as so often happens, but was glad to see that this film really doesn't need a 5.1 track to work. The film keeps dialogue at the forefront and is clearly heard while allowing echoes and airy atmospherics to control the scene. Scoring by Climax Golden Twins also keeps the track lively and effective without dominating the scene. Imaging is effective with the stereo channels providing the right amount of subtle movement to keep that sense of dread working. Levels are also set just right so you shouldn't need to ever adjust the volume once you've got it set at a comfortable level. That said, I recommend you keep the volume up for this one - just so you soak in all of the disturbing and ominous tones.

Return to Danvers: The secrets of 'Session 9': (HD 48:57) This is an exhaustive and fascinating series of interviews with cast and crew. While all of the basics of story genesis, scripting, shooting on location are covered, it's really interesting to hear them talk about shooting under such creepy conditions and they managed to create a big looking film on a very small budget.

Horror's Hallowed Grounds: (HD 20:13) Fans of the series will be more than happy to see the old Danvers insane asylum explored by Sean Clark. It's also rather unsettling to learn the old asylum is now "luxury" apartments. Who in their right mind would want to live in that place willingly and pay to be there?

Deleted Scenes/Alternate Ending: (SD 9:40) This covers an interesting but understandably deleted subplot. The material is great stuff and it would have been cool to see it reinserted back in the film in some way as an alternate cut.

Story to Screen: (HD 10:01) This is a quick and cool look at behind the scenes shooting and how the final film looked coupled with storyboards.

The Haunted Palace: (SD 12:54) This is a vintage behind the scenes bonus feature that looks closer at the history of the Danvers State Hospital location.

I hadn't seen 'Session 9' in over a decade. It was a movie I saw late at night in college and it freaked me out in ways few movies can. I'm happy to see that the film still holds up all of these years later. It was a movie that had stuck with me and seeing it again after so long only reaffirmed my belief that Brad Anderson and his talented cast and crew managed to create one of the most unsettling and disturbing movies of the early 2000's - if not that entire decade. When horror was content being a goofy gory parody, 'Session 9' had real guts and teeth to it. Scream Factory has brought the film to Blu-ray with an A/V presentation that is pretty fantastic considering the original digital source. In addition to the original extra features from the DVD being ported over, some new interviews and behind the scenes material round out an excellent bonus features package. If you're a fan of 'Session 9' or even if you're new to the flick, consider this Blu-ray release highly recommended.

Sale Price 15.99
List Price 17.99
Buy Now
3rd Party 10.41
In Stock.
See what people are saying about this story or others
See Comments in Forum
Previous Next
Pre-Orders
Tomorrow's latest releases