As an initiation rite into Alpha Sigma Rho fraternity, four pledges must spend a night in Garth Manor, twelve years to the day after the previous resident murdered his entire family. Two of the pledges, Marti and Jeff ignore the rumors that the now-deserted mansion is haunted by a crazed killer, until one by one, members of their group mysteriously disappear. Could this be a part of a fraternity prank ... or is a demented former tenant seeking revenge?

Hell Night happily resides within those already cram-packed memory banks of my horror-craving youth, those formative years when I was most ravenous and eager to watch anything without discrimination. And it was largely thanks to still-new-at-the-time VHS tapes feeding that insatiable hunger, allowing me to devour every new release with little to no concern of its quality because the cover art was more than enough to convince me to take a chance. Today's young moviegoer will never have the excitement and joy of walking through the aisle of their local video store and deciding what horror flick to watch that night solely based on the box's artwork. And this mostly forgotten B-slasher, produced at a time when the subgenre was just about to explode in popularity, remains one of those cherished memories. The picture of a young woman grabbing an iron-wrought gate for dear life while scary-looking hands pulled at her dared me to bring the nightmare home, and I still remember enjoying the terror I felt while watching a fraternity-hazing ritual gone wrong.

Aside from nostalgic-attachment, however, the movie remains surprisingly entertaining and well-made for a small-budget slasher with a generic plot from an unknown writer, Randy Feldman, who went on to pen Tango & Cash and Nowhere to Run. Added to that, the director, Tom DeSimone, came from the adult film industry and had only made a small handful of mainstream features without much success before helming this colorful fiasco. By all reasonable expectations, Hell Night should not have been as much fun as it actually is, an amusing spooky romp about college kids pranking new fraternity pledges spending the night inside a supposedly haunted mansion. DeSimone doesn't waste any time introducing the four students doomed to the humiliation of their peers, or better yet, he takes full advantage of having the legendary star of The Exorcist, Linda Blair, on set. At the time, she was more obtainable after some publicized controversies a couple years prior turned her into a box-office risk, but her name nonetheless gave this production more credibility. 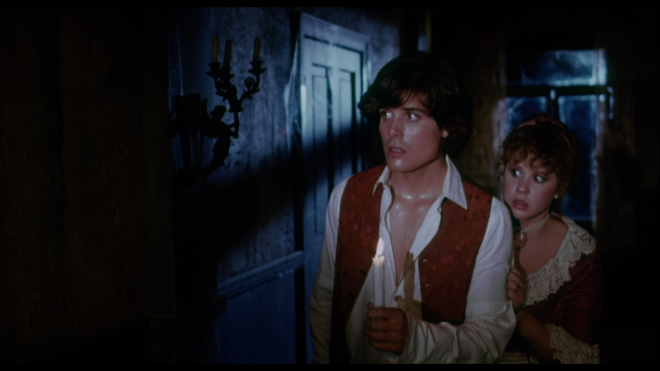 In Hell Night, she is quickly singled out as the doe-eyed, optimistic "Final Girl" when Peter Barton sets his eyes on her across a crowded room and the camera fittingly shoots her in a subtle soft-focus glow. It's just as amusingly silly to watch as it can be somewhat admired for its cleverness, but for anyone familiar with the subgenre, we can appreciate DeSimone's approach as something worth analyzing because he's ingeniously assuring his audience they're watching another formulaic and predictable horror flick. This becomes all the truer when Kevin Brophy exposits the legend of Garth Manor possibly still being haunted by the murderous owners, and later, Vincent Van Patten and Suki Goodwin are up to the usual mischievousness that essentially seals their fates. And for the most part, DeSimone doesn't stray from conventions while at the same time, he does not strictly adhere to them, either. For one, Van Patten's surfer dude displays unexpected heroism and the maniac killer's uncanny ability to appear randomly is logically explained.

Revisiting DeSimone's cult gem after over a decade, I find myself possibly loving the movie more today than I ever did as a kid, better appreciating the tight script that nicely sets things up for future events and even subverts the typical, eye-rolling tropes. Most notably is a seemingly pointless and nonchalant conversation between Blair and Barton revealing she's a skilled mechanic, a skill that towards the end becomes quite the fortuitous talent to possess at a time of crisis. But perhaps most inspiring is DeSimone and cinematographer Mac Ahlberg photographing the kids' fatal sleepover as an artfully subtle homage to classic gothic horror in the vein of Hammer Films and American International Pictures' output during the 1960s. Most of Hell Night is about generating an eerie atmosphere with dark hallways covered in cobwebs, a spooky mansion where everyone walks around carrying candelabras and the gore is kept to a minimum but still pretty corny. After all these decades since watching it, I'm still enjoying Tom DeSimone's Hell Night.

Shout! Factory brings Hell Night to Blu-ray as a two-disc Collector's Edition package under the distributor's Scream Factory line. The Region A locked, BD50 disc is housed inside a blue, eco-elite case with brand new reversible cover art and a cardboard slipcover. At startup, viewers are taken to a static menu screen with a picture of the newly commissioned artwork, options along the bottom and music playing in the background.

At the start of this classic B-movie slasher, a white text screen explains producers used the best available 35mm film print they could find. The HD presentation is the result of extensive restoration efforts to those surviving elements, mixed with some standard definition material to replace missing footage, and it was later remastered in 4K.

So, with that in mind, this 1080p/AVC MPEG-4 encode is possibly the best the movie will ever look, and it is undoubtedly a major improvement over other home video editions even if the end result doesn't compare to other releases from the same period. Overall definition and resolution reveals lots of small details in the costumes, the aged furniture and other small objects decorating the dilapidated mansion. On the other hand, a majority of the picture is also incredibly soft with several blurry moments, which is clearly related to the quality of the source, and there are instances of vertical scratches appearing and reappearing. Then again, these traits add to the movie's enjoyment, making it feel more theatrical along with the fine layer of grain.

The rest of the 1.85:1 image, however, displays average to strong contrast, making much of the presentation appear flat and dull, although whites are very clean and crisp. Black levels are better balanced with rich, dark shadows throughout, but delineation within the darkest areas can be lackluster in a couple areas. Although colors don't really pop and lack some punch in general, the overall palette is nonetheless nice and attractive with spirited primaries and lots of noticeably warm earth tones, immersing the mansion in a cozy yellow glow.

The presentation is not likely to impress anyone, but this remaster is a massive upgrade from the 2003 DVD.

Tom DeSimone's cult slasher film also spends one hell of a night alone with a DTS-HD Master Audio mono soundtrack, proving itself an outstanding companion to save the video. Dialogue is clear and precise in the center, delivering each line and hysterical scream with excellent intonation. Although limited to the middle of the screen, the lossless mix comes with a surprisingly terrific sense of presence and great clarity in the background activity. The mid-range may not be particularly impressive, but the soundstage delivers marvelous separation and fidelity without a hint of distortion during the loudest segments. Low bass is appropriate and hearty for a feature of this vintage. There are a few instances of popping, cracking and hissing, but like the video, it only adds to the movie's low budget, B-quality charm.

Audio Commentary: Star Linda Blair is joined by director Tom DeSimone and producers Irwin Yablans and Bruce Cohn Curtis for a friendly and admirably chatty conversation about the production. The group mostly spends their time reminiscing and sharing a good amount of background information and anecdotes.

Linda Blair: The Beauty of Horror (HD, 35 min): The actress talks extensively about her aspirations, her career after the success of The Exorcist and her eventual involvement with this production.

Peter Barton: Facing Fear (HD, 21 min): The soap-opera actor shares his memories of being on set, working with the rest of the cast, initial reservations of the production and various anecdotes.

Trailers (1080i/60): The original theatrical preview is joined by a pair of TV spots.

While Tom DeSimone's Hell Night is a mostly forgotten B-slasher, produced at a time when the subgenre was just about to explode in popularity, the movie has become one of my most cherished memories partly because of the VHS box artwork daring me to welcome the nightmare as a kid. Aside from nostalgic-attachment, however, the small-budget slasher remains surprisingly entertaining and well-made because the filmmakers transcend the generic plot with a classic gothic atmosphere and a couple character surprises. The Blu-ray from Scream Factory gives the movie a new lease on life with a brand new 4K remaster, making it the best the film has ever looked despite the somewhat average HD video quality. The DTS-HD soundtrack provides a stronger presentation, but ultimately, the treasure trove of new bonus material is what makes the overall package recommended for the curious and a wonderful addition to the cult library.

Sale Price 26.88
List Price 34.93
Buy Now
3rd Party 25.57
In Stock.
See what people are saying about this story or others
See Comments in Forum
Previous Next
Pre-Orders
Tomorrow's latest releases