Overview - A spirited accounting of one of the most obscure periods of the world's history. This reprisal is magical in its execution and gives its audience something to watch.
OVERALL
Recommended 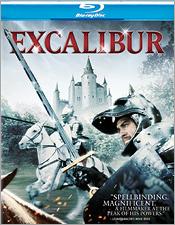 While historians and scholars may debate King Arthur's existence, there's no debating the fact that the stories about him and his court have proven to be a rich source of inspiration for artists in all mediums and have captivated people for much of the last millennium. And there's no reason to think that will stop considering the numerous books, movies, and television shows already created over the past decade that have been clearly influenced by the Arthurian legends.

After trying for 20 years, director John Boorman finally brought his version to the screen with 'Excalibur' in 1981, which debuts on Blu-ray in time for the film's 30th anniversary. Based on Thomas Malory's "Le Morte D'Arthur," which was published in 1485 and is considered the most notable English-language Arthurian literature, Boorman co-wrote the screenplay with Rospo Pallenberg. The film is epic in scope, as it covers Arthur's entire life, and it shows how giving in to desire is not only frequently the root of conflict, but also the downfall of many of the characters.

The opening titles state it is the Dark Ages and the land is divided because there's no king. Uther Pendragon (Gabriel Byrne in his film debut) and his men battle with Duke Gorlois (Corin Redgrave) for the title, but after the wizard Merlin (Nicol Williamson) gives Uther Excalibur, the Duke defers to Uther. However, their truce doesn't last long, as Uther offends the Duke by lusting after his wife Igrayne (Katrine Boorman) and commands Merlin to assist him in bedding her, which Merlin does in exchange for the result of their union.

The story then jumps ahead to Arthur (Nigel Terry) as a young man, learning how to be a squire to the man he thinks is his older brother but he ends up becoming the King of England in the Sword in the Stone sequence, popularized by T. H. White's 1938 novel and Disney's 1963 adaptation. As King we see Arthur fall in love and marry Guenevere (Cherie Lunghi); assemble the Knights of the Round Table; enlist the service of Lancelot (Nicholas Clay), who begins a romance with Guenevere; the rise in power of Arthur's half-sister and sorceress Morgana (Helen Mirren), whose son Mordred (Charley Boorman/Robert Addie) she thinks is destined to become King; and the quest for the Holy Grail.

Boorman and the actors treat the subject matter as serious as a Shakespearean play and that's the main reason it works so well. Nicol Williamson's performance is the highlight. He has a commanding presence as expected given that Merlin's sorcery makes him so powerful, but he delivers a deft comic touch at times. The rest of the cast is just as committed. Nigel Terry's Arthur, in part because of the range of emotions the character goes through, comes across like a real person rather than a legendary figure. Aside from Byrne, it's fun to see Patrick Stewart and Liam Neeson early in their film careers.

The fight scenes are staged well. It's wonderful to see people actually fighting and falling from great heights off ladders and over castle walls. The stunt choreography and cinematography add an authenticity that's lost with modern-day CGI, although the scene where Uther is ambushed has a good bit of arm chopping and blood spraying that inevitably brings to mind the Black Knight from 'Monty Python and the Holy Grail'.

The only problem I had with the script is that I didn't buy Lancelot and Guenevere falling in love at first sight with each other as he provides escort to her wedding to Arthur. Not to say that their love story doesn’t work later in the film as Arthur acts as King first and husband second but that initial moment didn't sell me on it.

While revisiting genre pictures can provide a rude wake-up call to how poor the tastes of our younger selves were, John Boorman shows that a quality picture assembled by a talented team, like 'Excalibur', will endure.

'Excalibur' is a 25GB Region A/B Blu-ray disc housed in a blue ecocase. The disc boots up directly to the menu screen without any promotional advertisements.

Presented with a 1080p/AVC MPEG-4 transfer displayed at 1.78:1, the look of the Blu-ray is interesting because it appears most of the deficiencies are due to the source. Quite a number of scenes are filled with fog and smoke, and the focus is soft throughout, possibly due to a filter. I presume this will be problematic with some viewers, but the lack of sharpness, which diminished the depth, creates an aesthetic that works with this film, adding a mystique as if looking back through the mists of time or into a dream world.

There are a number of scenes shot at night and in dark castles with minimal light added in deference to the time, so while blacks are deep, they frequently crush and contribute to poor shadow delineation.

The high definition format causes the mattes to show their age, and in combination with the clarity of the shiny silver armor occasionally worn, reflections of crew and equipment can be seen if you know what you are looking for.

But there are positives. Colors are solid, particularly the greens seen outdoors in the grass and trees as well as the lights used to color Excalibur. The orange from the fire is vibrant as well. Flesh tones appear consistent. Details can be seen in the fabrics and chain mail. Grain can be seen throughout. No digital augmentation or artifacts were seen.

The audio comes in a DTS-HD Master 5.1 track. Right from the beginning, the score swells through the entire system with the brass instruments standing out. During the opening battle sequence, the music is noticeably louder in the mix than the sounds of fighting, such as the clanging of metal on metal, and the shouts of the injured, both of which are also heard in the surrounds. When there's no fighting, the audio elements are better balanced.

Carl Orff's "Carmina Burana" is thunderous as it accompanies Arthur into battle later in the film. The subwoofer also provides quite a wallop to the crashes from battering rams and projectiles hurled from catapults as well as the crashing of thunderclouds that accompany lightning strikes. Good imaging can be heard as horses move through the channels and so can the swinging of a mace as it slides through the air, missing its intended target.

There are instances of ADR that sound flat. Morgana's voice as a child sounds particularly odd and the joust before Arthur becomes King sounds fake. 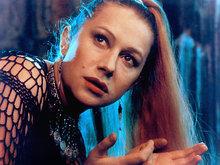 John Boorman did a very fine job bringing the Arthurian legends to life, but for its 30th anniversary, the film deserved slightly better treatment. While the visuals are likely as good as they get without major tinkering, the audio could have been easily improved with a little time and money invested in remastering the soundtrack. And surely some extras could have been created, from new interviews to, at the very least, some type of feature about the source material. Still, the film is very enjoyable and the Blu-ray presents an adequate experience, so I recommend it.

Sale Price 9.99
Buy Now
3rd Party 9.75
In Stock.
See what people are saying about this story or others
See Comments in Forum
Previous Next
Pre-Orders
Tomorrow's latest releases