Sinister events bring together a writer (David Soul) fascinated with an old hilltop house; a suave antiques dealer (James Mason) whose expertise goes beyond bric-a-brac; and the dealer’s mysterious, pale-skinned “partner” (Reggie Nalder) in “Salem’s Lot” -- a blood-curdling shocker based on King’s novel and directed by Tobe Hooper (Poltergeist).

For many of us, certain films have shaped our childhood, and in some cases, even haunted our nightmares. I'm not pointing to those that gave rise to a love of cinema. 'Raiders of the Lost Ark' and 'Back to the Future' take top honors in that regard. I'm referring to movies which left a lasting impression and often only remembered in fragments. Or perhaps the memory of watching it invokes that deliciously blissful sense of nostalgia. For me, Tobe Hooper's 'Salem's Lot' is that movie — along with John Carpenter's 'Halloween' right beside it. I wasn't allowed to read Stephen King's book until a few years later when my parents believed I was old enough to handle such a scary story. But the by time the made-for-television adaptation was about to air, I was prepared to visit the quaint, peaceful New England town of Salem's Lot, Maine. As with so many other movie-watching memories cluttering the recesses of my mind, I still remember sitting in front of our ugly, brown-paneled Zenith console TV anxious for the terror to begin.

Needless to say, I was exceedingly thrilled to see the ancient, terrifying vampire with the deceptively amicable name of Kurt Barlow. Without a doubt, Reggie Nalder's performance and Jack H. Young's freakishly hair-raising makeup is just one of the most unforgettable aspects, metamorphosing into an iconic presence of the genre almost immediately. Taking obvious inspiration from Max Shreck's ghastly Count Orlock in F.W. Murnau's 'Nosferatu,' the character not only surpassed my expectations, looking far more ghastly than my young imagination could have conjured. But he also managed to loiter about my nightmares for some time after. Random thoughts would replay that hideous visage of a pale blue and hairless man with long, spidery fingers and violently green eyes jumping out the shadows as he did with the town's realtor and adulterer Larry Crockett (Fred Willard). Or the scene of him entering Ned's (Barney McFadden) jail cell and creeping towards the unsuspecting town bully from behind a thick cloud of fog. 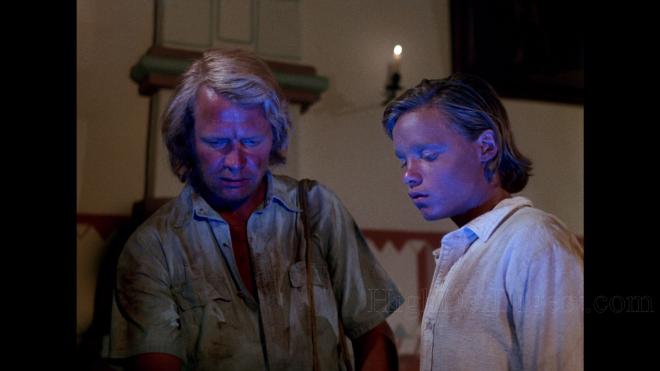 Speaking of nightmare-inducing scenes, the images which have stuck with me the most throughout my life were those involving the kids of Salem's Lot, for fairly obvious reasons. As the town slowly fell prey to Barlow's hypnotizing gaze, it was the children looking like mini versions of Count Orlock which really made the movie utterly terrifying. And frankly, they continue to be a major reason behind the movie's lasting legacy and for making it a favorite cult classic. The first kid turned was little Ralphie Glick (Ronnie Scribner) after losing his way at night in the forest and later visits his older brother, Danny (Brad Savage). Once at home and soon after at the hospital, in both instances, director Hooper and cinematographer Jules Brenner produce a terrifying image of a child floating from the darkness and fog that's been the cause of many a nightmare. Later, they turn up the scares when Danny visits his best friend and horror fanatic Mark (Lance Kerwin) by hearing Danny scratch at the window with spine-chilling effectiveness while innocently asking to be let in, which of course, Mark refuses.

For as long as I can remember, these are the visuals which have stood out most in 'Salem's Lot' and preoccupied much of my imagination into adulthood. Revisiting the charmingly picturesque town again, I'm reminded of the wonderful performances by the cast, particularly Hollywood legend James Mason ('Lolita,' 'Bigger Than Life,' 'A Star Is Born'). Although Barlow is the story's ultimate villain, it's Mason as the creepily mysterious but gentlemanly antique dealer Richard Straker who keeps viewers in suspense. By all appearances, he carries himself with a charitable gentle air, but the dark rings around his sternly watchful eyes suggest a cryptic man with malevolent thoughts. The only person to suspect the newcomer is Ben Mears (David Soul), a moderately successful fiction writer returning to his childhood home because the house now occupied by Straker continues to haunt him. With the help of his new girlfriend Susan Norton (Bonnie Bedelia of later 'Die Hard' fame), her father (Ed Flanders) and Mark, he tries to stop the vampire from destroying this peaceful corner of Americana.

And after four decades since its original television broadcast, the 183-minute miniseries remains one of the best and most memorable vampire flicks. It not only takes inspiration from other horror classics, such as Murnau's 'Nosferatu' and Alfred Hitchcock's 'Psycho,' but it has also been a massive influence on many genre favorites, like 'Fright Night,' 'The Lost Boys' and 'Buffy the Vampire Slayer.' For me, it's a dearly beloved classic of my childhood that continues to entertain and arouse my imagination.

Warner Home Video brings 'Salem's Lot' to Blu-ray on a Region Free, BD50 disc housed inside a blue, eco-cutout case. At startup, viewers are taken to a static menu screen with options along the bottom.

The new strangers in town make themselves at home with a good-looking 1080p/AVC MPEG-4 encode, showing a vast improvement over previous home video editions.

Although the video is generally on the softer side of things compared to other releases from the same period, overall definition and clarity are excellent and revealing. The furniture in Straker's store and the wooden trimmings inside the Marsten House are distinct and clear while also showing tiny nicks, scrapes and scratches, and all Mark's monster figurines decorating his room are plainly visible. Fans can make out the stitching and threading of the 70s clothing, and healthy flesh tones reveal every pore, wrinkle and negligible blemish.

Presented in its original 1.37:1 aspect ratio, contrast falls on the lower end of the grayscale, but the video remains comfortably bright with clean, crisp whites throughout. Black levels are strong and true, providing an appreciable sense of depth, but shadows occasionally engulf some of the finer details in the darkest portions of the frame. While primaries are rich and bold, giving the image an attractive, rejuvenated feel, secondary hues are a bit on the average side yet accurately rendered.

There are a few poorly resolved sequences where grain is more pronounced and the source occasionally shows evidence of minor deterioration where the grain structure lightly pulses. But aside from that, this is a great high-def presentation of a cult television favorite.

The vampire sinks its teeth into Blu-ray with a strong DTS-HD MA mono soundtrack. Granted, the track doesn't leave much of an impression or compare to others from the same period, particularly because a majority of its runtime is muddled and showered in hissing and minor noise in the background. Thankfully, it's not enough to completely ruin or distract from the movie's enjoyment.

In fact, the lossless mix appears pretty faithful to its source, delivering precise, well-prioritized vocals. Although imaging feels pretty narrow and limited to the center of the screen, the mid-range is decently dynamic with clean separation and distinction between various noises and background activity. Fans can clearly hear each footstep making wooden floors creak, the spooky raspy voice of vampires and the scratching on windows with nerve-wracking effectiveness. Harry Sukman's score enjoys a nice sense of presence and warmth, but again, much of this also feels stuck right down the middle of the screen. On the other hand, low bass is adequate and responsive for a movie of this vintage, making this high-rez track a nice upgrade.

After four decades, Tobe Hooper's 'Salem's Lot' still haunts my imagination with several scenes which remain effectively creepy and nightmarish. Although a bit long in the tooth (all pun intended), the 183-minute television adaptation of the Stephen King novel continues to be as entertaining as ever, thanks largely to Hooper's direction, the performances and the iconic visage of the vampire Mr. Barlow. The Blu-ray arrives with a great-looking video and a strong audio presentation, but supplemental material remains a bit wanting. However, the overall package is worth the asking price and should sit proudly in any cult collector's library.

Sale Price 8.99
List Price 14.97
Buy Now
3rd Party 4.87
In Stock.
See what people are saying about this story or others
See Comments in Forum
Previous Next
Pre-Orders
Tomorrow's latest releases