Overview - After a cruel joke goes awry, severely burning him and subjecting him to five years of intensive, unsuccessful skin graft treatments, Cropsy (Lou David) is back at camp... and ready to wreak havoc on those who scarred him! With his hedge clippers in hand, he terrorizes the camp and systematically mutilates each victim. Can a few courageous campers save themselves and destroy this demented madman before he kills them all?
OVERALL
Recommended 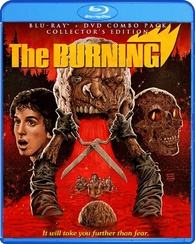 A summer of fun, friendship, raging hormones, and practical jokes make up the majority of the festivities and amusement in the summer camp slasher classic 'The Burning.' Girls bond by smoking cigarettes and discussing the muscular physiques of boys, while the boys sit around playing cards, gawking at nudie magazines, making fun of each other's muscular physiques, and boasting about their sexual prowess. Per usual, the most boastful of the boys is also the biggest jerk at Camp Stonewater, a pushy loudmouth with a macho gait and thick "Noo Yawk" accent named Glazer (Larry Joshua). And of course, no summer camp is complete without a few mischievous antics, whether it's teasing the girls, pushing another into the lake, or firing an air gun at someone's butt.

Five years earlier, however, one such prank meant to scare the caretaker of nearby Camp Blackfoot, "Cropsy" (Lou David), went horribly awry, burning most of his body and leaving him terrifyingly disfigured. The somewhat unusually long prologue to this independent horror flick directed and co-written by Tony Maylam shows the poor man recovering in intensive care where he scarily pranks an orderly with his cooked hands. After a brief but gruesome encounter with a prostitute, initiating his murderous rampage, Cropsy returns to his old stomping grounds and satisfies his voyeuristic pleasures, watching the kids, waiting for the moment when he can have them all to himself. Lucky for him, a small group is taking three-day canoe trip the following morning.

It's a fairly standard, nearly formulaic "slasher" plot and setup about revenge and kids who indulge in their base wickedness, except it's one of the first to quickly capitalize on the particular style set forth by 'Friday the 13th.' This then makes it somewhat of a forerunner and arguably one of the best and most memorable of the subgenre set in the woods with a camping theme. With Maylam's well-paced direction, the story doesn't hesitate to set a comical moral tone about the consequences and pain caused by the cruelty of a kid's practical joke. The mystery driving the narrative is part of its charm, delivering an amusing, unforeseen twist at the end, while the gory practical effects of legendary makeup wizard Tom Savini, considered by many gorehounds to be some of his very best work, keeps audiences in shocking dismay.


Best of all, the order in which the kids are soon dispatched is enjoyably unpredictable, keeping viewers on their toes as to who will be next to greet Cropsy and his razor-sharp hedge shears. Thirty-some years later and I'm still surprised oafish meathead Glazer isn't the first to go. Instead, his reluctant girlfriend Sally (Carrick Glenn) and he depart from this Earth at the most funnily inconvenient moment. With the discovery of their bodies and the return of the group's makeshift raft, camp counselors Todd (Brian Matthews) and Michelle (Leah Ayres) try to maintain order and quickly devise an escape plan. Meanwhile, curious voyeur Alfred (Brian Backer), who also happens to be the wimpiest virgin of the camp, runs lost into the forest, forcing Todd into heroic rescue mode.

Although promptly made on the heels of the success of Sean S. Cunningham's horror camp feature, 'The Burning' can be seen as early precursor of things to come, cementing the basic outline of the subgenre. Sadly, the movie was soon lost in a deluge of imitators hitting screens on practically a weekly basis — the short-lived golden age of the slasher. And still, it's one of the best of the bunch, inspired by a real-life urban legend, while also remembered as the beginning of the Weinstein dynasty and the first production of their Miramax Films. The production also features the screen debuts of Fisher Stevens, Holly Hunter, and Jason Alexander, who essentially feels like a teenage version of George Costanza. Most importantly, after three decades, the gem remains just as entertaining as ever. This is a much-loved summer camp horror classic.

Shout! Factory brings 'The Burning' to Blu-ray as a Two-Disc Collector's Edition under the distributor's Scream Factory line. The Region A locked, BD50 disc and DVD-9 copy on the opposing panel are housed inside a blue, eco-elite case with brand new reversible cover art and cardboard slipcover. At startup, viewers are taken to a basic menu screen with memorable music and full-motion clips. Also, if you buy direct from the Shout! Factory website, fans can get an exclusive, limited edition poster of the newly commissioned artwork with their purchase!

'The Burning' sets the screen ablaze with a fantastic-looking 1080p/AVC MPEG-4 encode that shows the print used was in excellent shape. Granted, a few segments are poorly-resolved with more pronounced grain compared to the rest of the video while also showing the occasional scratch, dirt and white speck, but that's the result of age, the condition of the source and photography, not the fault of the encode. Nevertheless, a large chunk of the high-def presentation is terrifically detailed with excellent definition in the surrounding foliage, rock formations and all around the campgrounds. Facial complexions appear healthy with natural, revealing textures during close-ups.

Presented in its original 1.85:1 aspect ratio, the image comes with brilliant, crisp contrast levels, giving daylight sequences an upbeat feel with appreciable clarity into the far distance. Blacks could be stronger, with a few murky, less-satisfying spots here and there, but overall, they're deep and accurate for a 30-plus year old movie. Colors benefit the most since primaries have never looked as vibrant and energetic in previous home releases, making greens and reds practically leap off the screen. With a thinly-layered and mostly consistent film grain throughout, the camp horror classic finds its way to Blu-ray with a great high-def transfer.

Accompanying the great video into the dark neck of the woods is an equally fantastic DTS-HD Master Audio soundtrack that will surprise even longtime fans. Preserving its original mono design, the soundstage feels broad with a strong sense of presence and clarity. Background activity, like birds singing atop trees or leaves rustling in the distance, is on full display with strong, discrete directionality, generating an amusingly convincing image. The mid-range is very dynamic, maintaining excellent detail during the loudest action sequences. The original score by Rick Wakeman of Yes fame enjoys superb fidelity and clean differentiation in each note of his synthesizer music. Low bass is appropriate to a movie of this vintage but also quite palpable and hearty, adding some appreciable weight to the music. All the while, dialogue reproduction is pitch-perfect and well-prioritized in the center, making this a highly-enjoyable listen.

A couple of the supplements are ported over from the 2007 DVD release.

Although promptly made on the heels of Sean S. Cunningham's 'Friday the 13th,' Miramax Films' debut production, 'The Burning,' can be seen as early precursor of things to come, cementing the basic outline of the subgenre. Out of a deluge of imitators hitting screens practically on a weekly basis, Tony Maylam's summer camp horror classic is one of the more memorable movies from the short-lived golden age of the slasher. The Blu-ray from Scream Factory arrives with an excellent audio/video presentation. The two-disc combo pack comes with a healthy assortment of bonus features sure to please devoted fans, making the overall package a great addition to any horror collection.

Sale Price 23.06
Buy Now
3rd Party 23.06
In Stock.
See what people are saying about this story or others
See Comments in Forum
Previous Next
Pre-Orders
Tomorrow's latest releases