A malevolent force in a small New England town takes the shape of a clown, but he's not clowning around. Instead, he terrifies youngsters and brings some to their untimely doom - until some wily kids fight back. The evil resurfaces 30 years later: meaner, angrier, deadlier. And friends who vividly remember youthful terrors reunite to battle It. Based on the 1986 novel.

Since the miniseries and the original book on which it is based deal with themes of childhood memories haunting one's adult life, it seems fair to compare my memory of the made-for-television adaptation as a teenager to my most recent viewing as an adult. Or to be more precise, how those memories and a healthy imagination have clouded my judgment of the movie. Which is sort of like being haunted by them, I suppose. So, let's start this review of 'Stephen King's IT' with a confession.

I do not think clowns are remotely scary. Not in the very least. And I most definitely do not understand people's phobia of a person colorfully dressed in a parachute-like nylon outfit with a puffy red wig and a squeaky nose. I just don't get it. However, that never stopped me from enjoying a good horror flick featuring a crazed, murderous clown, especially the bloodthirsty killer type from outer space. And it most certainly didn't stop me from immediately reading and enjoying Stephen King's novel the moment it hit bookstore shelves in 1986. In the capable hands of Mr. King, the clown was pretty terrifying, scaring me to my wits on several occasions, as did it everyone else that year. It didn't induce nightmares or anything, but it made me nervous to turn off the lights while worrying if someone hiding in the bushes outside my bedroom window.

When the inevitable adaptation came to television four years later, I was, needless to say, excited at the prospect of seeing the child-snatching Pennywise the Dancing Clown be brought to life. It was the television event of the year at the time, and for those two nights in November 1990, I was glued to my 13" Sony Trinitron, savoring the clown's twisted wisecracks and sadistic gags that terrorized the kids of Derry, Maine. I don't really recall being scared by the movie quite as much as King's book, but I enjoyed it nonetheless.

I felt bad for the overweight but generously friendly Ben because his crush Beverly never knew he wrote her a romantic poem until they saw each other again as John Ritter and Annette O'Toole. Poor panicky, asthmatic Eddie (Dennis Christopher) remains the same anxious kid living with an overprotective mother. I identified the most with history-nut Mike (Tim Reid) because his interests were my own while professional comedian Richie (Harry Anderson) just fell flat, and almost wished he stayed Seth Green forever. But the scenes that stood out most — and basically had me convinced it was a decently creepy movie for television — were obviously the ones with Pennywise in it, such as when he pulls Georgie down the storm drain, the boy's shower sequence and when adult Bill (Richard Thomas) encounters It at the graveyard. I also remember there were many alterations made to King's original story, most notably the omission of an incredibly bizarre and controversial sex scene. 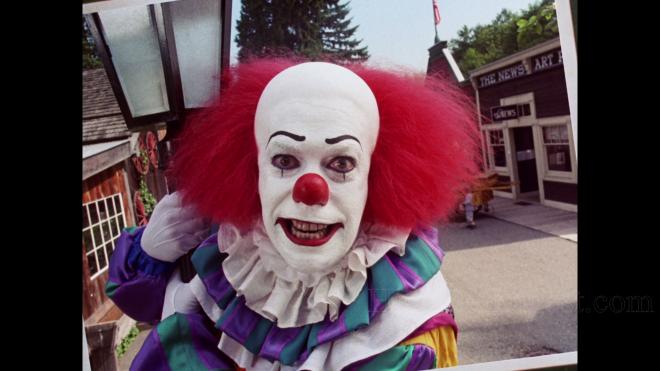 Since I already confessed not fearing clowns, I should also come clean about not seeing the adaptation since it originally aired — 26 freaking years ago! And not because I intentionally avoided it. Instead, there are too many movies to keep up on every year, and frankly, the movie never left enough of an impression to be watched again. That is, until now. Even through the thick glasses of nostalgia, particularly the type which could make me forgive it for all its massive shortcomings, 'Stephen King's It' is absolutely terrible! All my childhood memories — thinking and waiting for something even remotely creepy — can't polish this turd. There's nothing scary about a clown with balloons on the balcony rails of a small town library or blood bursting from the bathroom sink or seeing Seth Green sporting a crew cut being chased by a teenage werewolf. It seems as though director Tommy Lee Wallace ('Halloween III,' 'Fright Night Part 2') and cinematographer Richard Leiterman didn't even bother creating a spooky atmosphere or building the tension towards the final showdown against It.

However, because I am glutton for bad movies, I must also admit to still enjoying the heck out of 'It.' Although the filmmakers never intended this as a comedy, I found myself constantly laughing at those moments meant for inducing chills and cringing in my seat during what they thought would produce laughter. The funniest scenes were the awful stop-motion sequences and the special effects which have not aged well. The only thing that remains the production's strongest aspect is Tim Curry as Pennywise, a memorable and now iconic performance horror hounds continue to celebrate to this day. Mr. Curry not only brought the character to life as imagined in the book, but he somehow managed to turn It all the more sinister with a simple curl of the lip and a twinkle in his eye that implied malevolent intentions. In fact, looking back, he is the only reason why this adaptation is worth remembering at all.

Take Mr. Curry out, 'Stephen King's It' could have been worse than it already is. But sadly, like the people of Derry, I almost wish I could forget my memories, but keep Curry's Pennywise.

Warner Home Video brings 'Stephen King's It' to Blu-ray on a Region Free, BD50 disc housed inside a blue, eco-cutout case. At startup, viewers are taken to a static menu screen with options along the bottom.

Pennywise crawls out of the sewage with a strong 1080p/AVC MPEG-4 encode, delivering a significant improvement that scares all previous home video editions away. There hasn't been word that this transfer comes from the original 35mm negatives, but whatever the source, it appears to be in excellent condition. Immediately apparent is a brighter, more vibrant palette, turning the clown costume into a vivid array of blues, yellows and reds. Skin tones appear healthy. Blacks are deep and true, providing the 1.33:1 image with rich, dark shadows without obscuring background information.

However, the presentation tends to show its age on various occasions. Contrast levels are, for the most part, well balanced with fairly clean, crisp whites throughout. But there are many moments when those levels suddenly dip, some of which can be chalked up to dissolve transitions but not all of them. And there also instances of minor blooming and little to no variation in the whites. In either case, this makes several scenes look pretty dull and flat. Definition and resolution also fluctuates between excellent to average. The picture is awash with natural grain, but it, too, wavers from scene to scene, sometimes thin while other times, prominent and almost noisy. At its best, the video is appreciably detailed, exposing the smallest object in the distance with good clarity, but on the whole, the movie really falls on the softer side of things.

Still, this is the best the movie has ever looked and probably will without a proper remaster.

Just as with the video, the demon clown of Derry arrives decked out with a terrific DTS-HD Master Audio stereo soundtrack that makes previous versions float away. They all float away down here.

Spreading across all three channels, the miniseries enjoys a wide and expansive soundstage that seems continuously occupied with a variety of background activity. When the kids are building their dam, the sound of wind blowing through the trees and birds chirping can be plainly heard in the distance. As successful adults living in the city, the noise of traffic and nightlife subtly fills the screen. Vocals remain precise and well-prioritized in the center so that fans will never miss one of Pennywise's corny wisecracks. The music of Richard Bellis makes best use of the lossless mix, spreading evenly across the screen and nicely widening the soundfield.

Only notable issues are a fairly average and somewhat limited mid-range. Although more than likely related to the condition of the source and the original recording for television, the sound design simply isn't very dynamic and largely feels uniform and flat. Added to that, there isn't really any low bass to speak of, so the action and music tends to lack any sense of weight or presence. Thankfully, it doesn't ruin or negatively affect the movie's enjoyment, but it's worth noting nonetheless and sounds much better here than in previous home video editions.

I remember enjoying 'Stephen King's It' when it originally aired on television in 1990, but 26 years later, the adaptation does not hold up in the least, more likely to induce fits of laughter than nightmares. The only thing making the movie worth remembering and watching today is Tim Curry's now-iconic performance of Pennywise the Dancing Clown. Unfortunately, his screen time is a tiny portion of the production's 187-minute runtime. The Blu-ray arrives with improved picture quality, but the source, too, has not aged particularly well. On the other hand, the audio presentation will please fans of this made-for-television cult favorite. Sadly, supplements are terribly lacking, so only the most loyal of fans will be willing to pay for this package.

Sale Price 6.99
List Price 12.97
Buy Now
3rd Party 2.95
Available to ship in 1-2 days.
See what people are saying about this story or others
See Comments in Forum
Previous Next
Pre-Orders
Tomorrow's latest releases