Ghostbusters makes its long-awaited return, rebooted with a cast of hilarious new characters. Thirty years after the beloved original franchise took the world by storm, director Paul Feig brings his fresh take to the supernatural comedy, joined by some of the funniest actors working today – Melissa McCarthy, Kristen Wiig, Kate McKinnon, Leslie Jones, and Chris Hemsworth. This summer, they’re here to save the world!

It's unfortunate when it becomes difficult to discuss a movie without also addressing the controversy surrounding it. Most recently, Nate Parker's 'The Birth of a Nation' has resurfaced some disconcerting news about its director. But months before that, Paul Feig's 'Ghostbusters' came under fire and was almost instantly detested by fans of the original 1984 comedy classic. Even before anyone saw a single frame of it, the internet uproar targeted the concept of an all-female cast replacing the beloved characters originally played by Bill Murray, Dan Aykroyd, Harold Ramis, and Ernie Hudson. While some voices rightly shared concern over remaking a treasured 80s favorite — which this is — others expressed some rather alarming outrage of seeing women don the iconic jumpsuits and proton packs. It would seem the controversy could be viewed as somewhat emblematic our current political situation. But instead of diving into that rabbit hole, I find it more interesting the filmmakers used those dissenting voices as part of the film's humor, further bringing up questions of the filmmakers possibly fueling the debate with accusations of misogyny — which many are.

In either case — and frankly, more importantly for this review — the point is that Feig and co-writer Katie Dippold ('The Heat') cleverly addressed and ingeniously dismissed those concerns with jokes, most of which are at the expense of the female cast. When a book about the paranormal threatens her tenure at Columbia University, Dr. Erin Gilbert (Kristen Wiig) is forced to confront her co-author and former friend Dr. Abigail Yates (Melissa McCarthy). But after the two begrudgingly work together and record evidence for the existence of ghosts, their video goes viral, instantly making them and fellow engineer Dr. Jillian Holtzmann (Kate McKinnon) celebrities. Thus begins a series of astutely-aware wisecracks from silly online comments targeting our heroes' gender ("Ain't no bitches gonna hunt no ghost.") and assumed incompetence (Bill Murray delivers a hilarious cameo as famed paranormal debunker Dr. Martin Heiss). However, we soon find out the ladies are not only skilled and highly intelligent, but they are also hilarious with one witty line after another, generating a lively, energetic camaraderie that then animates the rest of the film with their infectious humor. 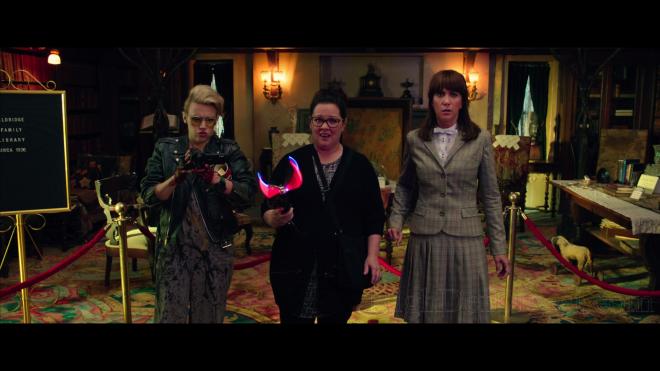 Granted, Wiig and McCarthy immediately settle into familiar ground with quirks and personality traits reminiscent of past performances. Wiig plays the jittery, fearful uptight geek with doe eyes that beg for the approval of others, but a willing pratfall clown who's repeatedly slimed during her spectral encounters. Meanwhile, McCarthy is the overly self-assured and tenacious intellectual who's continuously surprised when others don't see that as a virtue. As they demonstrated in Feig's 'Bridesmaids,' the two ladies make a fantastic comedy duo, playing to each other's insecurities with pithy remarks not meant to demean but boost each other's confidence as the plot progresses. And yet, the real standout is McKinnon as the delightfully odd and eccentric egghead Holtzmann, a role wholly original and unique that it's now impossible to imagine anyone else doing it justice. Leslie Jones as the team's fourth member and NYC history buff Patty Tolan sadly doesn't bring anything new to the table, mostly relying on her usual tactics of screaming, which sadly drags some of the humorous pacing to an SNL sketch halt.

And that only reminds of the other controversy attached to this production: the promotional campaign for 'Ghostbusters: Answer the Call,' as it is officially titled, left fans expecting the absolute worse. Thankfully, the film is better and smarter than trailers led us to believe. Feig and Dippold demonstrate the best course for remaking a beloved holy grail — by reimaging the entire plot with contemporary influences while staying true to the central core theme, rather than simply rehashing what's already been done. A case in point would have to be the surprise performance of Chris Hemsworth as the team's attractive but inept and dimwitted receptionist Kevin. His portrayal is not only a clever reversal of gender roles, but a funny gag that pays dividends throughout thanks to the Australian actor exposing and flexing his comedic chops. Admittedly, the story's villain, played by comedy writer Neil Casey, leaves a disappointing sour note to the proceedings, but the filmmakers and other cast members more than make up for this two-dimensional stereotype.

And just to make clear, Paul Feig's 'Ghostbusters' doesn't come anywhere close to Ivan Reitman's original classic. But it also doesn't ruin anyone's childhood, as so many fetishizing nostalgists wish to complain. Ultimately, the remake is on par with the 1989 sequel, which is not an entirely bad thing, as both films can be enjoyed as funny, easy-going popcorn pieces.

Sony Pictures Home Entertainment brings 'Ghostbusters: Answer the Call' to Blu-ray with a code for an UltraViolet Digital Copy. The Region A locked, BD50 disc is housed inside the standard blue, eco-elite keepcase with a glossy slipcover. Both cuts of the film are available on the same disc, and the unrated, 134-minute extended version comes with several new scenes and different jokes from those seen in theaters. At startup, the disc commences with a series of skippable trailers before switching to an interactive menu screen with the usual options along the bottom while music plays in the background.

The conductors of metaphysical examination break through the barrier into the Blu dimension with a fabulous looking 1080p/AVC MPEG-4 encode. Boasting several admirable moments throughout, especially when our heroes confront those pesky ghosts, the video is razor sharp with clean, well-defined lines in every scene. Individual bricks of buildings can be counted, and minor damage from age along the walls is plainly visible. The lettering of signs, bottles and books are resolute while the tiny exposed wires of Holtzmann's proton packs are quite distinct. Viewers can also make out negligible blemishes and pores in the lifelike facial complexions, as well as the threading and stitching of the team's jumpsuit uniforms.

Presented in a 2.40:1 aspect ratio, the video displays a well-balanced contrast with brilliant, crisp whites, making the movie really pop. Black levels are inky rich and true, which serve the visuals perfectly during the final showdown taking place at night. Shadows are deep and penetrating without sacrificing minor details, providing the image with a beautifully cinematic appeal and a three-dimensional quality, especially during the film's final half hour. On top of that, Robert Yeoman's photography comes with a sumptuous array of colors, which terrifically add to the many creative CG effects. From the proton beams and the ghosts to the buildings and the city streets, primaries are always animated while secondary hues radiate with energy, providing the disembodied spooks with luminous, weirdly surreal glow.

The only area of complaint is the noticeable blooming in the highlights, creating several instances of clipping and mild posterization around the brightest areas. Contrast tends to run a bit on the hot side, but interestingly, this doesn't happen when ghosts make an appearance. There is also evidence of mild aliasing, which is most evident during city aerial shots, even though it's not bad enough to completely ruin the film's enjoyment. However, the artifacts are there, keeping the video from receiving a better score. It's also worth mentioning that the presentation is not CIH friendly. Many of the special effects intentionally jump out the 2.40:1 frame and into the letterbox mattes, creating a pseudo 3D effect that pays off better on the UHD presentation. Added to that, a final rescue mission with Wiig and McCarthy through the ghost portal suddenly switches from 2.40:1 to a 1.85:1 aspect ratio in all three versions.

The ladies of the paranormal also come equipped with an excellent, near reference quality DTS-HD Master Audio soundtrack.

From the opening moments, the lossless mix immediately engages viewers with a wide and expansive soundstage, as Theodore Shapiro's music spreads across the screen and into the sides. In fact, the score appears to do a majority of the work, employing nearly every speaker to fully immerse the viewer in the moment. Joining in the fun are a variety of sound effects and ambient noises that run amok to create a highly satisfying soundfield. The reptilian demon at the rock concert zooms all over the place and its roars reverberate all around. The final showdown in and around the Mercado Hotel also comes with a few amusing bits of screaming ghosts and debris flying in every which direction.

Imaging feels broad with a great deal of warmth and fidelity, as background activity moves flawlessly between the speakers with distinct clarity and separation in the high and mid ranges. With much of the attention placed on the back and forth banter of the characters, vocals are given top priority and come through cleanly and never lost in the heat of chaos. The low-end adds a palpable, rumbling weight to the action and music with a couple subtle moments hitting just below the midbass area. However, it never really hits as hard or as demanding as the visuals would imply (bass chart).

The only thing holding this lossless mix short of perfection are several instances of clipping in the upper ranges, which happens during the presentation's loudest moments. It can be heard when ghosts screech their ear-piercing screams and a couple times when proton beams are fired. There are tiny hints of distortion in these parts as well, but overall, the sequences simply come off noticeably bright. Aside from that, the high-def track is a fun listen.

While it seems difficult to discuss Paul Feig's 'Ghostbusters' without also addressing the controversy surrounding it, the film should ultimately be appreciated on its own merits. And the end result is a hilarious remake that does the 1984 original justice while also feeling like an entertaining standalone. Much of this is thanks to Feig and co-writer Katie Dippold's smart take on Ivan Reitman's comedy classic and the hilarious performances of the entire cast. The Blu-ray arrives with an excellent, near-reference audio and video presentation that should please fans and dissenters alike. With a wealth of supplements to boot, the overall package is recommended for those willing to give the entertaining remake a chance.