An ex-sharpshooter for the Kingdom of Korea (Choi Min-sik, 'Oldboy') is hunting the country's last tiger. But Japanese forces and vicious local poachers also seek "The Four-Legged Mountain Lord," and will stop at nothing to claim their prey.

Like people, a film can have eyes that are too big for its own stomach. Naturally, in order for a film to be a success, it needs to have a great story with well-written characters, but in order to resonate with an audience, it needs to have a tangible theme, a mission that drives it forward. Sometimes this message can be an overt political statement or it can just be an idea about life and the surrounding narrative supports that notion. That said, sometimes a film can have too many themes and ideas for its own good. Such is the case of Park Hoon-Jung's 2015 thriller 'The Tiger' starring Choi Min-Sik as an aging hunter tasked with hunting and killing the last tiger by an obsessed Japanese commander.

in 1915, Chun Man-Duk (Choi Min-Sik) is a skilled but struggling hunter eking out a meager living for his wife and child in the Jirisan region of Korea. Food is scarce and he is forced to give up his own meals to keep his son fed. But on one particular morning, Chun Man-Duk knows he's going to find something, something big and special that will change the fortunes of his destiny. What he didn't expect to find was the largest tiger on the mountain known to all as "The Mountain Lord." By only wounding the beast, Chun Man-Duk missed his opportunity at fame and fortune.

Years later, Chun Man-Duk has withered into an aimless drunk who scours the land for medicinal herbs to keep his son fed. As his wife died during an attack by The Mountain Lord, Chun Man-Duk has been unable to pick up his rifle. Even if he could will himself to seek revenge upon the beast, the occupying Japanese forces prohibit hunters from taking up their true professions - unless so ordered by the local commandant Officer Ryu (Jung Suk Won). At first, he refuses, but everything changes for Chun Man-Duk when his young son joins in on the hunt. Now tasked with finding and killing the great beast, Chun Man-Duk will have to muster all of his skills as a hunter and the last ounce of courage he has left if he hopes to kill the last tiger in Jirisan. 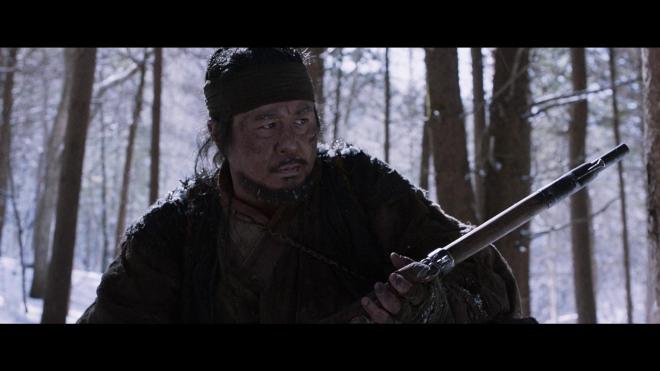 'The Tiger' should be an intense, epic action drama. Think something along the lines of 'The Grey' set in 1920s Korea. This is the story about a man fighting against his own nature while trying to find a place in the world. His fight is personified in a gigantic deadly tiger that has killed dozens of people including his own wife. 'The Tiger' should be this sort of lean and mean, simply told allegory. Unfortunately, the film falls apart as it frequently stops the thrust of the main film to chase around frayed story threads that don't really have a barring on the main film. While some side information about the Japanese hiring local hunters is interesting, it bears little importance to Chun Man-Duk's downfall and spiritual resurrection. The side story of Chun Man-Duk and his strained relationship with his son is very good material because it cements the notion that the former hunter's family deserves better. However, when that story just gets going, it jumps down a rabbit hole of a side story about trying to find the 16-year-old boy a wife. While the story of the Japanese wanting to kill the tigers works as a metaphor for controlling the people of Korea by destroying their soul, this through line is undone by all of the excess baggage - especially when the film clocks in at nearly two and a half hours.

Set aside the numerous and unnecessary plot threads, 'The Tiger' still wears the meat of a great film on its weary bones. As he's demonstrated in films like 'Old Boy' and more recently in 'The Admiral,' Choi Min-Sik is a fierce performer with incredible range. Without saying a word, we understand his character's inner turmoils and tensions about his profession, his station in life, and getting back into the fray one last time to kill the beast he failed to take down years ago. Had the film trimmed off a solid twenty to thirty minutes of side stuff, the film could have lived up to Choi Min Sik's impressive performance. As it stands, the film is watchable - enjoyable for a lot of it, but the noticeable extra weight surrounding the main story keeps the final from being something great. It's frustrating because I want to love 'The Tiger,' in many ways it's the kind of film I absolutely love, but it just doesn't come together to form a satisfying whole.

'The Tiger' arrives on Blu-ray courtesy of Well Go USA. Pressed onto a Region A BD25 disc, the disc comes packed in a standard snapper Blu-ray case. The disc opens with trailers for other Well Go USA release before arriving at a static image main menu with traditional navigation options.

While the story elements within 'The Tiger' may struggle, this 2.39:1 1080p transfer is a visual masterpiece. From frame one, the image showcases an incredible range of detail, depth, and color saturation. The image maintains a very film-like presentation. I couldn't find any information about shooting format so I'm leaning on the side that this was digitally shot, but without any of the telltale "video" visual cues. Black levels are rich and inky while shadows - especially in heavily forested scenes - showcase an incredible range of three-dimensional depth. Colors tend to air on the muted cooler "winter" colors, but during full sunlight scenes there is plenty of primary radiance. Flesh tones also look healthy and natural. The only downside I can say about this transfer is that the high quality imagery betrays the obviously CGI tiger shots - but that's more of a production issue and not a problem of the transfer.

Just as impressive as the image is the Koran DTS-HD MA 5.1 audio mix. Dialogue is clean and clear to hear with English subtitles keeping up without reading too simplistically. Sound effects and background atmospherics work to bring the scenes a strong sense of range and dimension. Imaging is absolutely stellar as there is plenty of channel movement along the sides and to the rears that make you feel like you're in a wide open space or out in the middle of a forest. It gets a little extra creepy when you hear the guttural rumblings of a tiger echo around the channels. More than once I caught myself looking over my shoulder. Levels are pitch perfect, once you've got your volume at a comfortable level you shouldn't have any need to keep your thumb on the button.

'The Tiger' is an okay film. The frustrating part about actor Choi Min-Sik's latest appearance is that the film could easily have been a great with some tighter editing. With numerous side stories weighing things down, the solid main story frequently falls out of focus. Well Go USA brings 'The Tiger' to Blu-ray in excellent form as the disc exhibits an exceptional first-rate A/V presentation. Sadly there are no extra features to speak of. If you're a fan of Korean cinema or just dig what Choi Min-Sik does best, 'The Tiger' is watchable, but not altogether memorable. The film and this Blu-ray release are still worth a look.

Sale Price 19.99
List Price 26.74
Buy Now
3rd Party 19.99
In Stock.
See what people are saying about this story or others
See Comments in Forum
Previous Next
Pre-Orders
Tomorrow's latest releases