The "chills come thick and fast" (Los Angeles Times) in this riveting, jolt-a-minute thriller about an innocent-looking doll inhabited by the soul of a serial killer who refused to die. From the director of Fright Night, Child's Play comes complete with "excellent special effects" (Leonard Maltin) and a slew of special features that make this Blu-ray your "friend to the end!"

In this "clever, playful thriller" (The New York Times), only six-year-old Andy realizes that Chucky is responsible for a spate of gruesome murders, including that of his unsuspecting babysitter. But the real terror takes hold when the deranged doll becomes determined to transfer his evil spirit to a living human being... Andy! 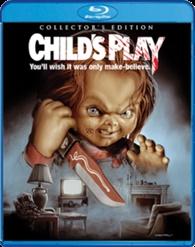 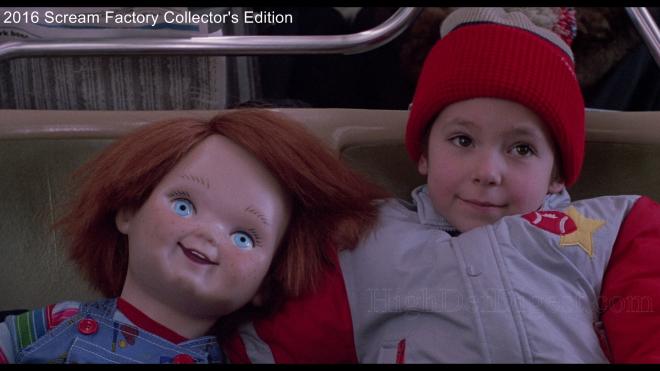 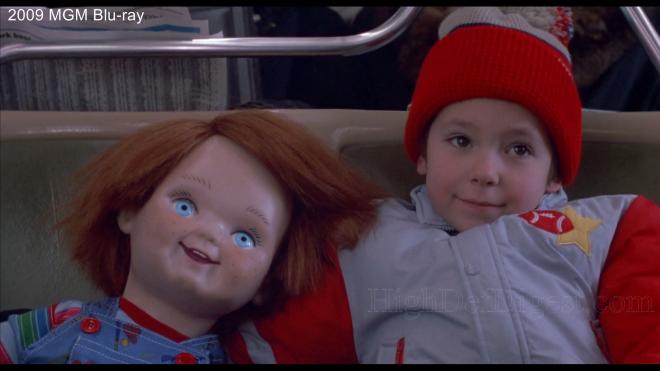 This is not to ignore the spot-on performances from the rest of the cast. I am simply pointing out Dourif's as a central and crucial piece to the movie's enjoyment. Chris Sarandon has worked in some very memorable roles in the past ('Fright Night', 'The Princess Bride', 'The Nightmare Before Christmas') and for most horror fans, his portrayal here as the skeptical detective happens to be one of them. Considering that a good chunk of her acting is based on reactions to an autonomous doll, Catherine Hicks definitely pulls her weight and wins over the audience. But the one person who stands out is the very young Alex Vincent, showing some excellent range for a child his age, particularly the scenes at the children's hospital. In the end, though, Dourif remains the primary reason for fans revisiting the film and encouraging the series to continue.

Other than the 'Bride of Chucky', the original installment of the franchise lingers in the memory banks of horror aficionados because of its surprisingly good and stylish direction. Not only does Tom Holland put the dark shadows to fine use and actually generates an eerie atmosphere, but he's also skilled at keeping the camera from revealing the many tricks-of-the-trade. Most interesting is the way in which the movie tapped into the strange cultural phenomena of children's toy marketing of the 1980s. While the plot's creator Don Mancini has admitted to the Cabbage Patch Kids craze as a direct influence, I still like to think the Good Guy doll possesses a striking resemblance to My Buddy or even a demented version of Teddy Ruxpin. In either case, the idea of toys which try to appear more lifelike is quite creepy and disturbing, and the filmmakers take advantage of this and provide audiences with a tale that plays into our childish nightmares.

Making it all a reality is, of course, the amazing F/X work from Kevin Yagher, creator of The Crypt Keeper and make-up artist for Freddy Krueger. In this day and age of CGI fakeness, it's hard to believe this film was pushing the boundaries of special effects and animatronics. But back then, audiences were blown away by how realistically Chucky moved and looked, to watch his horrifying facial expressions slowly morph from innocent doll to a raving psychopath. Personally, I find it utterly hilarious to watch the Good Guy doll start off with a basic parted haircut that evolves into a receding hairline by the end. The groundbreaking special effects to this day still hold up as a major part of the film's entertainment value. If not for the remarkable work done by Yagher's team trying to be as realistic as possible, 'Child's Play' could have easily been nothing more than a faded memory of terribly made horror flicks.

Shout! Factory brings 'Child's Play' to Blu-ray as a two-disc Collector's Edition package under the distributor's Scream Factory line. The two Region A locked, BD50 discs are housed inside a normal blue case on opposing panels with brand new reversible cover art and a cardboard slipcover. The second disc contains the same supplements from the 2009 MGM release along with a wealth of new bonus features. At startup, the disc goes to a generic menu selection on the left side with music and full-motion clips. 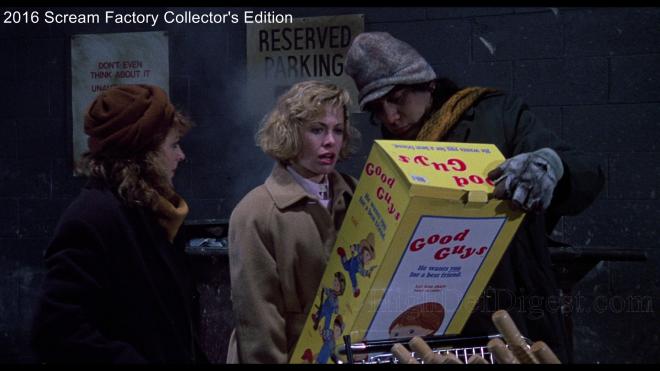 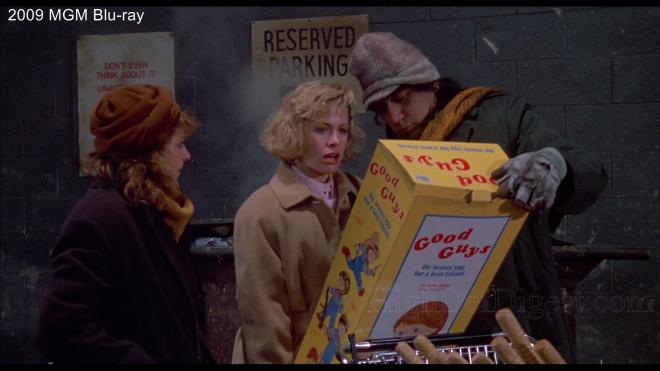 Chucky finds a friend 'til the end with an excellent 1080p/AVC MPEG-4 encode, which was created from a 2K resolution scan of the interpositve. Offering a massive improvement over the 2009 MGM release, the video shows lots of details in the clothing and in the streets of Chicago. The stitching and fabric in the Good Guy's outfit is plainly visible, and the fine lines in the stone bricks of the Barclay's apartment building are well defined. The 1.85:1 image is brighter compared to its predecessor but balanced and comfortably bright. Black levels, unfortunately, could be a tad stronger, as shadows tend to look a bit flat and murky in some spots. However, objects in the darkest portions of the frame remain visibility and a few nighttime exteriors reveal a good deal of depth. Colors benefit the most from the remaster with primaries looking particularly vibrant and richly saturated, making for a surprisingly animated presentation.

Understandably, there are several moments of softness and the resolution noticeably dips from scene to scene, much of which is related to the optical photography. But overall, the source appears to be in great condition and a thin layer of grain provides the presentation with a nice film-like quality. 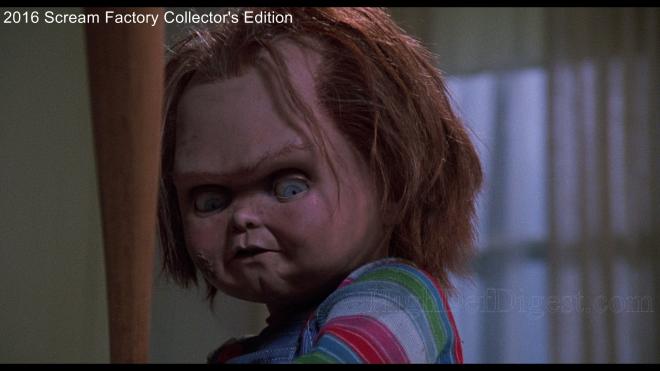 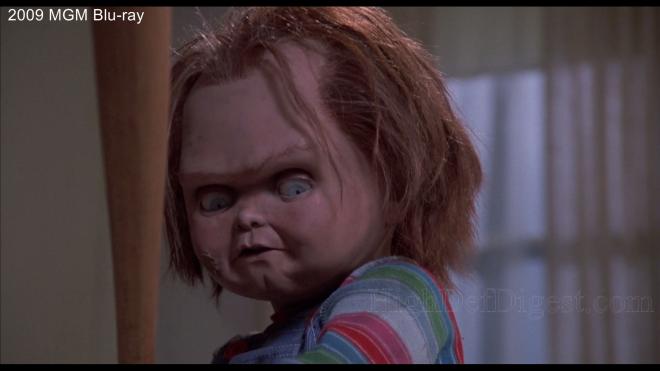 The favorite cult thriller takes another stab at Blu-ray with two great listening options. And while I tend to prefer the original stereo design over the newfangled surround sound, I'm happy to report being pleasantly surprised by the DTS-HD MA 5.1 soundtrack. The stereo alternative is just as good, but the two are fairly similar except for the shocking amount of rear activity in the latter, offering many instances of atmospheric immersion like the sounds of thunder or the ricochet of bullets. Even Chucky has his moment where he scurries along behind the listener, extending the soundfield and generating a welcomed instance of creepiness.

For the most part, the 5.1 track is managed in the front soundstage, exhibiting good presence and separation. There is plenty of movement and commotion, keeping the audience engaged. Dynamics are not very expansive, nor do they reach the upper levels, but they are cleanly delivered and well defined. Low-frequency effects are also put to good use, adding heavy palpability to several action sequences and every gunshot fired. Only complaint are vocals being overwhelmed in a couple areas, but conversations remain clear and precise on the whole. 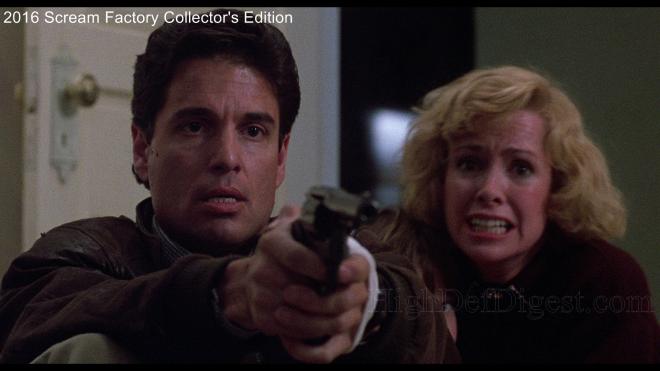 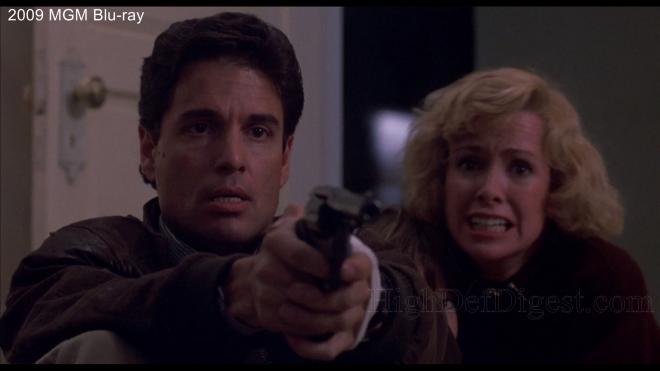 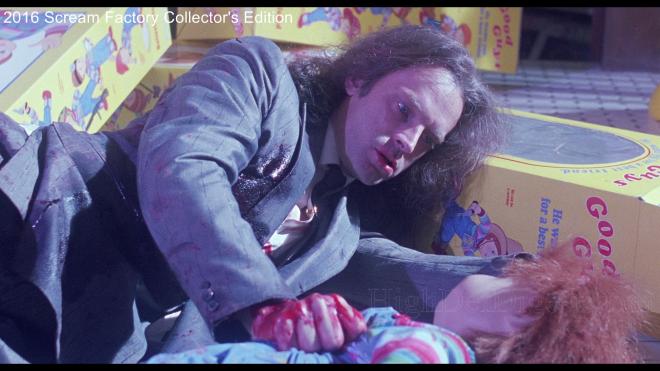 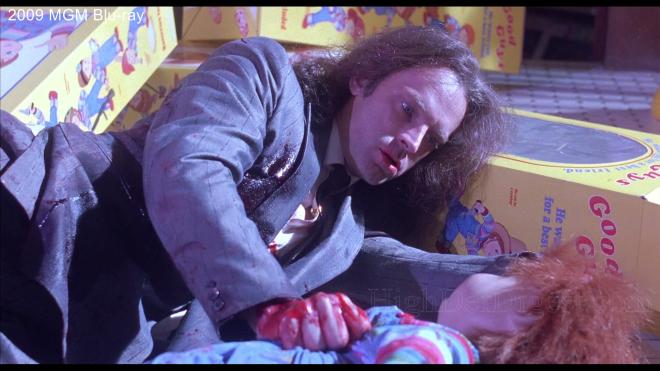 Nearly thirty years later, 'Child's Play' remains a fun little late-night flick on a Saturday night. The original installment to the popular franchise, which also introduced Chucky to the world of horror cinema, takes another at Blu-ray with improved video thanks to a 2K scan of the interpositive and a great audio presentation. The same supplements of the previous 2009 release are ported over, and they're joined by a brand-new assortment of special features. Fans will be more than happy with this two-disc collector's edition from Scream Factory, making it a recommended treat for the Halloween season.