At a prestigious South African school, Melea and her boyfriend imagine a hip-hop version of Romeo and Juliet, but Melea's dreams are dashed when she's unable to pay tuition and is forced to leave. Determined to fulfill her destiny, she does the unthinkable – persuades the community to support her artistic and unique vision. When adrenaline-filled rehearsals cause dance crew rivals and egos to get in the way, everything falls apart. Once again, Melea dares to dream and risks it all to put on a performance you'll never forget. From the director of Honey and Honey 2, Honey 3 is full of dance, romantic love triangles and heart-pumping music you won't want to miss.

Skill films feel like a dying genre. Movies that showcase a person's physical abilities on a playing field or on the stage with a story wrapped around that ability feel like they're going the way of the dinosaur. While flicks like the 'Pitch Perfect' franchise still pull in some box office bucks, movies about dancing or unique sports just aren't getting made any more. If you're at all familiar with movies like 'Step Up' or 'Honey' then you're probably already well aware of the fact that there really isn't much to distinguish them from one another. Change the faces, change the athletic ability, and reuse the same stale story and you've got a "new" movie for audiences to ingest. Sadly, 'Honey 3: Dare To Dance' follows the same rote formula. While an impressive display of natural talent, the story is so bland there isn't much point in watching it.

Melea Martin (Cassie Ventura) has a dream. As a student at Cape Town's most prestigious art school, Melea has a dream of bringing Hip Hop to Shakespeare. 'Romeo and Juliet' is the choice play she hopes to bring a modern and edgy interpretation to the stage by combining it with her modern Hip Hop dance techniques. While the faculty, her friends, and her boyfriend Erik (Kenny Wormald) are intrigued at the prospect of updating the Bard's great work of tragic romance, the financial department isn't too keen. As it turns out, Melea is up to her neck in debt and her scholarship isn't enough to cover expenses. Out on her own, Melea must find a way to pull everything together to bring to the stage the greatest presentation of 'Romeo and Juliet' anyone has ever seen.

While the Cape Town location is unique and the desire to transform a work of Shakespeare into  Hip Hop dance is a new spin, the story behind 'Honey 3' just isn't anything new. If you've seen 'Flashdance,' 'Breakin'' or even 'Breakin' 2: Electric Boogaloo' for that matter, you've seen 'Honey 3' many times over. Athletic ability movies of this type are virtually a dime a dozen. It's unfortunate too because at its core, 'Honey 3' could have been something worthwhile and unique. I was actually kind of interested in seeing this movie just because it feels like it's been a long time since an ability movie like this came out. Sadly, writer Catherine Cyran and director Bille Woodruff just don't do anything new with the material. 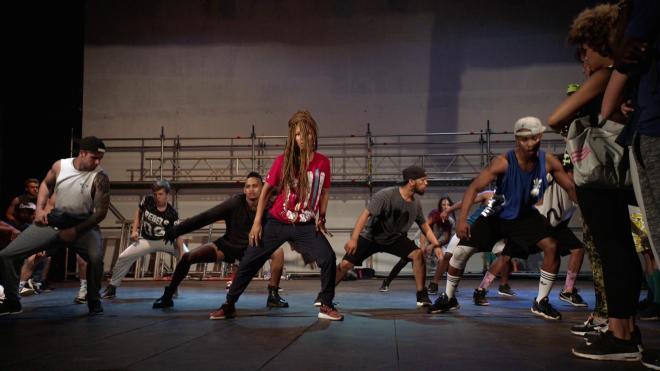 Now, that isn't to say 'Honey 3' is a complete washout. Like watching a film about race car drivers and their high-speed duels on the track, 'Honey 3' is all about staging one impressive dance sequence after another. The cast is clearly bringing their A-Game here as Cassie Ventura and Kenny Wormwald along with the rest of the cast are clearly very talented dancers. Had 'Honey 3' been a sort of short-form musical, possibly even just a music video, it would have been a great showcase of their natural talents. While Kenny Wormald already got to strut his stuff in the 'Footloose' remake, he doesn't really bring anything to the material other than being able to move in sync with the music. Unfortunately the same goes for Cassie Ventura. She's practically playing the same sort of person she did in 'Step Up 2: The Streets.' Coupled with the familiar storyline, 'Honey 3' is the unfortunate sort of movie that is content with just playing things safe. It doesn't try anything new, so if the dancing is all you're after, this movie delivers those scenes in spades.

Where franchises like 'Honey' could go to make things better is to upend it's drama genre conventions. Why not make these movies action films? Sure 'Gymkata' is a goofy take on the survival action game, but over all it worked as a gymnastics movie! It showcased some impressive action while letting it's lead star Kurt Thomas got to do some deadly gymnastics routines. If 'Honey 3: Dare To Dance' had gone that rout - that would have been something cool to see. Some skilled guys and gals knocking out bad guys clad in 80s ninja garb in sync to modern music, that at least would be a fresh approach to old material. Maybe 'Honey 4: Deadly Moves' could deliver on that idea? Should I copyright that idea now? Maybe I'll let the powers that be have that one for free and they could just owe me one. At the end of the day 'Honey 3: Dare to Dance' is worth watching, or rather certain scenes are worth watching, the stuff in the middle and surrounding edges you can skip.

'Honey 3: Dare to Dance' arrives on Blu-ray in a two-disc set courtesy of Universal Home Video. Pressed onto a BD50 disc, the disc is housed in a standard two-disc Blu-ray case with identical slip cover. Also included is an Ultraviolet Digital HD voucher. The disc opens with trailers for other Universal releases before arriving at a static image main menu with traditional navigation options.

While being a direct-to-video release, 'Honey 3: Dare to Dance' offers up a bright and beautiful 1.78:1 1080p transfer. Shot digitally, this transfer boasts some truly impressive detail levels. Clothing, facial features, scenery, and the film's production design are all on display for audiences to pick apart. Colors are bright and vibrant offering plenty of natural primary pop and presence. Black levels are equally impressive offering up some great shadow separation giving the image a notable three-dimensional quality to it. Video noise is never an issue as the image has a very natural look to it. I was honestly very impressed with this transfer as even the most expensive big-budget release fail to look this good on disc.

In addition to its image quality, 'Honey 3: Dare to Dance' comes with a pretty fantastic English DTS-HD MA 5.1 audio mix. The music is the real star of this track as there is plenty of LFE hitting the speakers with the great bass beats. Sure, dialogue is clean and clear and easy to hear without any interruptions or being overpowered by the music. The tunes are really cool because they provide a nice immersive quality to the movie. Imaging is also a joy because there is constant channel movement - especially during the dance sequences. This really is a track you're going to want to keep loud - that is if you don't have annoying neighbors who would complain!

Audio Commentary: Director Billie Woodruff goes solo for this commentary and provides an interesting look at the making of the movie. I may not have enjoyed the film, but you can tell that a lot of effort and love went into bringing it to screens and Billie offers up a lot of details.

Extended Dance Sequences: (HD 14:22) Oddly, these longer dance sequences are presented in a rather lifeless DTS-HD MA 2.0 audio mix. Granted we're supposed to focus on the fancy leg moves, but still, it's a little odd.

Deleted Scenes: (HD 11:42) There really isn't too much new or amazing here, it's mostly scene extensions.

Behind the Dance: The Making of 'Honey 3': (HD 6:03) This is a very short, standard, but cool behind the scenes bonus that focuses on the locations.

Battle Dakota Club: (HD 1:58) Even though this is short, it's a pretty cool look at how to shoot a complicated dance sequence inside a busy club.

'Honey 3: Dare To Dance' isn't really anything special. It's a dime a dozen movie. If you've seen any other dance or athlete movie, you've already seen 'Honey 3: Dare to Dance.' The dance numbers are about the only thing really worth seeing. Universal Home Video brings 'Honey 3: Dare to Dance' to Blu-ray with an impressive A/V presentation that is near-reference quality. Extra features are short, but still informative and worth a look. While the technical merits of the disc are praiseworthy, I just can't bring myself to recommend the movie. If you're curious, it's a rental. A blind buy is a tough sell.

Sale Price 8.94
Buy Now
3rd Party 14.99
In Stock.
See what people are saying about this story or others
See Comments in Forum
Previous Next
Pre-Orders
Tomorrow's latest releases