Ever since Hopper (Johnny Simmons) was a child, he has dreamed of becoming a major-league pitcher. Relentlessly pushed by his abusive father (Academy Award Nominee Ethan Hawke), he’s on the verge of becoming one of the game’s most promising players when he unexpectedly breaks down on the mound. Now Hopper’s only hope lies with an unorthodox sports therapist (Academy Award Nominee Paul Giamatti) who urges him to let go of the past so he can find success on the field.

Raw natural talent can be a weighty burden. Often, it's easy to stand as outsiders and judge an athlete for their abilities and the accolades and financial improvements that ability can reward them as "easy" achievements. At the same time, we tend to forget what those men and women have put on the line or given up to get where they've gotten - or in many cases - what they had to endure. Just because they're millionaires or their faces are on Wheaties boxes doesn't mean they're not dealing with their own personal issues. This is the central idea behind Writer and Director Noah Buschel's 'The Phenom' starring Johnny Simmons, Paul Giamatti, and Ethan Hawke.

Hopper Gibson (Johnny Simmons) is a man who has it all served up to him on a silver platter. Since he can regularly sling 100mph fastballs, his arm is like an ATM machine linked to a bottomless bank account. He's bought his mother Susan (Alison Elliot) a gigantic new home with a pool and numerous other amenities she doesn't need or want, but will be getting just the same. Endorsements line up at Hopper's feet just to be a part of the magic he can bring to the pitching mound. With all of this talent at his fingertips, what is keeping Hopper on the Atlanta Braves' farm team and not at the big show? As it turns out, there's more to Hopper than meets the eye.

As Hopper struggles to find the confidence within himself and consequently find his fastball, the once bright professional prospect is forced to meet with the unorthodox sports therapist Dr. Mobley (Paul Giamatti). For Mobley, Hopper's issues aren't really a big mystery. It's easy for him to know why Hopper can't find his pitch or why he can't sleep for days on end, but the challenge is going to be getting Hopper to realize these issues himself. With an intelligent and beautiful girlfriend like Dorothy (Sophie Kennedy Clark), he doesn't feel smart enough to even be dating to feeling like he owes his mother for taking care of him, Hopper already has a lot going on. His biggest fear, his biggest issue he must face rests with his abusive father Hopper Sr. (Ethan Hawke). 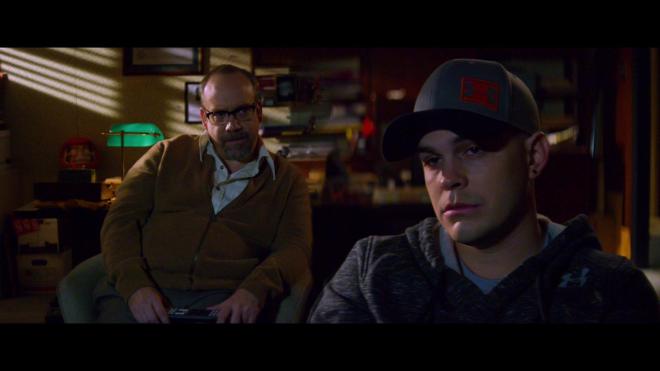 Once 'The Phenom' gets going and finds its dramatic stride, an intriguing and poignant human drama, unfortunately, becomes bogged down by predictable cliché. This isn't to say exactly that "if you've seen one, you've seen them all," but it doesn't take much effort to see where this story is going twenty minutes down the road. It's easy to spot where and when Johnny Simmons' Hopper is going to have to reconnect with certain characters. Juxtaposed against some flashback material, these bittersweet reunions can start to feel a bit redundant. Just as we meet Hopper during his first session with Dr. Mobley, the audience is tossed back in time a couple of years when the struggling pitcher was just a high school prospect with a lot of weight being tossed onto his shoulders. Through these flashbacks, the audience learns that Hopper's issues with his father are more than just mental, on more than one occasion it was physical and left a lasting mark - even if no one else could see the scar. While these scenes certainly are powerful and well-intentioned, after awhile it becomes easier and easier to retitle this film 'Good Will Durham.'

Where 'The Phenom' hits a grand slam home run is with the impressively talented cast who are clearly giving it their all. It's one thing to have a guy like Paul Giamatti playing a likable sympathetic character with some real heart, but the film also features a fierce turn from Ethan Hawke. At first, Hawke's Hopper Sr. can seem like the stereotypical abusive father whose pushed his son into sports so his own dream for success doesn't die, but limiting him to that characterization would be a disservice. Hawke absolutely owns the role and creates a human who is clearly flawed and unlikable, but not a complete monster that you can't feel a little sympathy for. On top of Hawke and Giamatti delivering some impressive material, Johnny Simmons comes in and holds his own. He plays a grown man with a balled up child-like fear in him and Simmons manages to deliver a heart-wrenching performance about a kid trying to please everyone but also find where he belongs.

The issue facing 'The Phenom' ultimately comes down to pacing and redundancy. The material is there, there is weighty and thematic substance running throughout the film, but there needed to be some release. It's hard to watch a character suffer for ninety minutes before you start to wonder what they're even living for. Rarely do we get to see Simmons' struggling Hopper actually be happy. This isn't to say that the character should be a giddy smiling idiot considering the material this film deals with, but just the same, it would have helped the film stick the emotional landing if Hopper had a reason to keep going beyond just finding his pitch. As the audience, we need that carrot dangled because, in a way we're Hopper, we're seeing and experiencing what he's going through so we need to know why he's doing it. If it's to win back his girlfriend, we need more of those moments. If it's to make peace with his father, that needs to be spelled out a little clearer than the few appearances the character offers. If it's just so he can pitch at the big show and earn millions of dollars, well, then that's a pretty shallow motivation.

'The Phenom' may not be a perfect sports drama, but it tries its best to be something genuine. Through some incredibly well-scripted and directed scenes executed by some impressive actors, 'The Phenom' is certainly a very watchable film. More than once I felt myself get caught up emotionally, but at the same time, I felt like the film was keeping me at an arm's distance. I wanted to love 'The Phenom,' I really did, it has a lot of good stuff going for it, but it left me wanting more than what I was given to hold on to.

'The Phenom' arrives courtesy of RLJEntertainment and is pressed onto a Region A BD25 disc. The Blu-ray is housed in a standard snapper Blu-ray case with identical slip cover. The disc opens with trailers for other RLJEntertainment releases before arriving at a static image main menu with traditional navigation options.

With a 2.35:1 1080p transfer, this digitally sourced image features some impressive range but soft black levels in a few key scenes hinder the final results. Detail levels are strong throughout and feature plenty of fine facial features and appreciable production design work. All you have to do is look at Dr. Mobley's office to get a sense of the work that went into designing the film. Some of the baseball scenes can appear a bit on the softer side and a bit more "video" than others, but all around it's still a solid looking film. Where there is a slight issue is with black levels. While most of the film features nice inky blacks with plenty of shadow separation to give it that desired three-dimensional quality, there are a few scenes where blacks come in notably softer and the image loses that sense of depth. All around this is a very good looking image.

'The Phenom' comes with a subtle but effective English DTS-HD MA 5.1 audio mix. As a dialogue-driven film, you should have no trouble hearing anything that is being said. Save for one instance, there are many long stretches of dialogue and the film's other elements like atmospherics and scoring don't intrude. There is a scene about midway through the film where a rock track comes in and drowns out what's happening on screen. It doesn't completely take out the dialogue but it gets pretty close. What's being said isn't entirely necessary information, but the scene lasts a couple minutes and it can be a bit frustrating. Imaging is also subtle, but there is enough going on to give a nice surround effect. Aside from that one particular instance, this audio mix is solid stuff and suits the nature of the film.

Interview With The Cast of 'The Phenom': (HD 9:28) Your pretty typical EPK interview material here, nothing really too informative beyond the basics.

'The Phenom' features some amazing performances from great actors who are playing some very interesting roles. The film itself seems to have a difficult time finding its reason for being. As we watch characters struggle with relatable emotions and situations, the film never really seems to find its sense of purpose. It's still worth watching for the cast alone, but some may feel left out by the time the end credits role. RLJEntertainment brings this film to Blu-ray with a solid A/V presentation. Sadly, extras are a bit lacking. 'The Phenom' may not be the sports drama everyone deserves, but I'm sure there are a few people out there who'll find it a worthwhile experience. Worth a look.

Sale Price 10.23
List Price 29.97
Buy Now
3rd Party 2.15
In Stock.
See what people are saying about this story or others
See Comments in Forum
Previous Next
Pre-Orders
Tomorrow's latest releases