A group of diverse individuals are suddenly taken from their homes and flown via helicopter to a futuristic bomb shelter in the desert, nearly two miles below the surface of the Earth. There they learn that a nuclear holocaust is taking place and that they've been "chosen" by computer to survive in the shelter in order to continue the human race. The shelter is designed to allow the people to exist underground comfortably for years, but they are faced with a threat nobody could have predicted: a colony of thousands of bloodthirsty vampire bats finds a way into the shelter and launches a series of vicious attacks where they claim the humans one by one...

'Chosen Survivors' opens with a comically dramatic scene of twelve strangers rushed from military helicopters into an installation with an elevator that then takes them below ground. The whole scene, which also serves as the film's opening credits, is shot in super slow motion with the camera loitering on each character's terrified, confused face, forcing audiences to share in the mystery and confusion for several minutes. The point director Sutton Roley and cinematographer Gabriel Torres want to get across is immediately understood, leaving little room for interpretation, but the journey to the underground shelter has got to be the longest elevator ride in movie history. Viewers are stuck in the tight confines of a shiny, metallic box, and we can feel the trapped, claustrophobic mood the characters undergo, which is to the movie's favor. But that mood overstays its welcome — the obligatory slowmo effect continues long after the elevator has stopped — and becomes a frustrating distraction, grudgingly delaying the point.

Rather than generating an air of apprehension, the amount of time spent puzzling over the commotion and supposed urgency only succeeds in producing yawns and expectations of a sluggishly-moving story. Creative as the filmmakers think they are with this tactic — even when the group finally arrives into a large, futuristic room, they persist in slowmo reactions of astonishment and falling over each other — the sequence sadly comes off amateurish and unsure of the story to create suspense on its own. From the font style of each cast member's name and how they were superimposed over the image to the camera movement and the narrative's lethargic pace, the production as a whole feels better suited for television. When the women find a cage full of dead birds or the bloody corpse of the hysterical Kristin Lerner (Cristina Moreno), the camera listlessly and unemotionally pulls back to take in the full scope of the (not so) gory aftermath like a soap opera, the stunned moment just before commercial break. 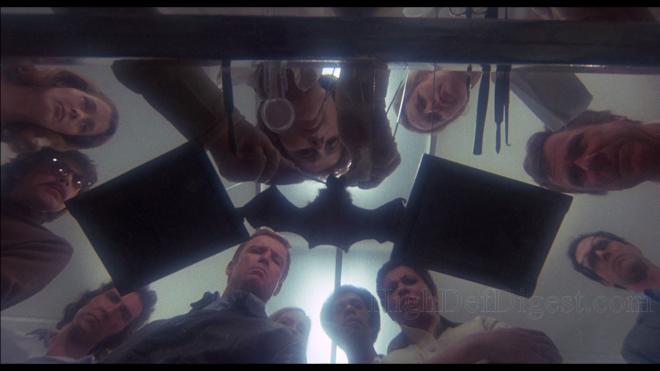 Perhaps, this is none too surprising given Roley's extensive experience behind the camera, the majority of which is overwhelmingly from television. And it clearly shows. Conversations between the various characters are almost always shot with a static camera, rarely showing any movement except for the few action sequences. And even then, Roley relies more on a slight canted tilt to create unease or imply a character's anxiety to any given situation. The twelve strangers are held against their will under the guise of surviving a worldwide nuclear holocaust, so tensions between them are sure to intensify with time and as cabin fever sets in. Most of the stress and restlessness comes from corporate magnate Raymond Couzins (Jackie Cooper), who feels his privileged lifestyle impugned by his new living situation. The rest of the cast is ultimately used to fill up the space of the bunker like props, taking turns confronting Couzins in some form or another, but these conflicts barely ever reach the heights of melodrama in Roley's hands.

Overall, 'Chosen Survivors' is not an all-out terrible movie, though that largely depends on one's tolerance for shoddy effects, laughably nonsensical dialogue and histrionics, and altogether bad filmmaking. But as far as second-rate B-level scifi horror goes, this unintentionally funny disaster flick can't survive its own absurdly half-baked premise. Torres photographed the entire movie with diffusion filters, providing the plot a strange dreamlike quality that's possibly meant to be ironic, but it just ends working against the story's horror elements or whenever characters are strained beyond their boiling points. And it's not like it would honestly matter much anyhow since the filmmakers thought it clever to introduce vampire bats into the mix, as though they were vicious, ravenous, bloodthirsty monstrosities that kill in packs. The cock and bull story is eventually undermined when Dr. Peter Macomber (Bradford Dillman) reveals a surprise twist that delegitimizes the plot's entire point, yet the filmmakers feel warranted in espousing some pseudo-morality theme because apparently, there's a lesson to be learned in fighting the uprising of vampire bats.

Kino Classics brings 'Chosen Survivors' to Blu-ray on a Region A locked, BD25 disc inside the standard blue keepcase. At startup, viewers are taken directly to a static main menu with music.

The survivors seek refuge in the high-tech comforts of Blu-ray with a strong and often pleasing 1080p/AVC MPEG-4 encode. The source has aged pretty well, all things considered, showing a good deal of definition in the clothing and the futuristic architecture of the underground shelter. However, the 1.85:1 presentation comes with its share of soft, poorly resolved scenes, none of which are related to the intentionally stylized photography, which was shot with the use of diffusion filters to give the movie an ironic dreamy appeal. There are also a couple instances of vertical lines, small splatters of dirt and very mild gate weave. Still, with a fine, thin layer of natural grain, the video has a welcomed film-like quality with excellent contrast and crisp, bright whites. Black levels are equally deep and true though poorly-lit sequences comes with murky, slightly faded shadows. Colors benefit most from the jump to HD, filling the frame with cleanly rendered primaries, but the palette favors warm, rich secondary hues.

The future of the human race rests on a good and generally satisfying DTS-HD MA stereo soundtrack. The overall lossless mix and score reveal excellent clarity and definition in the midrange, despite much of it feeling narrow in the center. There are also a couple instances of mild distortion during the loudest moments, the occasional popping and hissing, and it sometimes comes off a tad bright. Nevertheless, background activity remains distinct and clear, providing the high-rez track with a welcomed sense of presence. The biggest surprise for a movie of this vintage is a hearty and palpable low-end, providing the music and the few bits of action with appreciable weight. There are times when the ADR work is made too obvious, which can be rather distracting, but all in all, dialogue is well-prioritized and intelligible.

'Chosen Survivors' is a silly, forgotten B-horror sci-fi flick with the absurd premise of twelve strangers surviving nuclear holocaust in a military underground installation. However, the fight for the future of humanity is tested by vicious, ravenous, bloodthirsty vampire bats! The silliness is brought to Blu-ray with an average-looking video and a slightly better audio presentation. Packed with an amusing audio commentary track, the overall package is ultimately for fans only.

Sale Price 14.99
List Price 29.95
Buy Now
3rd Party 12
In Stock.
See what people are saying about this story or others
See Comments in Forum
Previous Next
Pre-Orders
Tomorrow's latest releases