Overview - Oscar-winning director Roman Polanksi (The Pianist) teams up with author-screenwriter Robert Harris (Enigma) for this twisty political thriller. Ewan McGregor plays an unnamed ghostwriter who signs on to pen the memoirs of former British prime minister Adam Lang (Pierce Brosnan). The money is good, but there's a catch: the ghost's predecessor perished under mysterious circumstances (his body washed up on the shore in an apparent suicide). Being the adventurous sort, the ghost puts that information aside and travels to Lang's austere compound on Martha's Vineyard, where he meets Lang's efficient personal secretary, Amelia (Kim Cattrall, good but for an inconsistent accent), and acerbic wife, Ruth (An Education's Olivia Williams). Just as he's wading through Lang's dull text, the PM's ex-cabinet minister accuses him of handing over suspected terrorists to the CIA, fully aware that torture would be on the agenda. The next thing the ghost knows, he's working for a possible war criminal, and the deeper he digs, the more convinced he becomes that Lang is lying about his past. After exchanging a few words with a sharp-eyed old man (Eli Wallach) and a tight-lipped professor (Tom Wilkinson), he realizes his life may also be at risk. Then, while Lang hits the road to proclaim his innocence, the ghost gets to know Ruth better--much better. If the conclusion feels a little glib, Polanksi tightens the screws with skill, McGregor enjoys his best role in years, and Williams proves she's fully prepared to carry a movie of her own. --Kathleen C. Fennessy
OVERALL
Highly Recommended 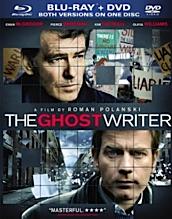 Roman Polanski was in the news a whole lot this past year, but not for the right reason. The famed director, who has given the world genuine classics like 'Chinatown' and 'Repulsion,' was nabbed in Switzerland in 2009, on behest of United States authorities. This is all stemming from charges of him raping a 13-year-old girl in 1977. Now, I'm not going to weigh in on his criminal charges (the message boards have plenty of reasons to hate me already, thank you very much), but I will say that throughout this hullabaloo, one of his very best movies was quietly released and just as quietly overlooked. That movie is 'The Ghost Writer.'

The movie is based on a popular suspense novel by Robert Harris (who co-wrote the screenplay with Polanski) and has a decidedly page-turn-y feel. It's chief mystery concerns a shamed former Prime Minister named Adam Lang (Pierce Brosnan) who is working on his autobiography. Lang's former ghostwriter mysteriously died. Ewan McGregor is the unnamed hero, a kind of second-stringer who is moderately successful, but could really use the job as Lang's new ghostwriter. He gets it. The ghostwriter then journeys to the island home of one of Lang's publishers (somewhere like Martha's Vineyard), where Lang is staying before a number of public speaking engagements in the United States. Upon his arrival on the east coast, he is greeted by Amelia Bly (Kim Cattrall), Lang's assistant, and Ruth Lang (Olivia Williams), the former Prime Minister's brittle wife. Everyone is on edge because of recent news reports that claim Lang, while Prime Minister, okeyed torture, with some wanting to bring about charges of war crimes.

Meanwhile, our plucky ghostwriter must deal with a quick turnaround on the largely unreadable book (the publishing wag, played by Jim Belushi, wants it back in a month). And then there's the mystery, which grows deeper and more labyrinthine, of what happened to the first ghostwriter… Do Lang's suspected CIA connections play a role? Are there secrets in the book that he's helping write? And how dangerous is getting into an affair with Lang's wife?

'The Ghost Writer' really is a joy. It's a smart, twisty little thriller that would have done Hitchcock proud. The narrative style is unhurried, moving surely and deliberately from one location to the next. This isn't a bad thing, but rather it lets us soak up all the atmospheric dread of a New England shoreline in the winter. (Alexandre Desplat's gorgeous, haunting score, helps this along too.) There are some absolutely jaw-dropping suspense set pieces, photographed with vigor by Pawel Edelman, and a general air that you are watching a skillful, stylish throwback: A smart movie for adults.

The performances are peerless as well. One of the great joys of 'The Ghost Writer' is its wry sense of humor. The movie is really, really funny. And Ewan McGregor is the anchor for this weird sense of humor, marking the first time he's shown any personality in a movie since before the 'Star Wars' prequels. (Maybe acting in front of a green screen and Lucas' plaid shirts does that to you?) Cattrall is really funny too. And Pierce Brosnan adds just the right amount of indignation and propriety in his portrayal of a Prime Minister under fire. It's the second best Tony Blair I've seen yet, after Michael Sheen, of course. Plus there's Olivia Williams, at times chilly, at times sexy, always mysterious; and a wonderful host of guest-or-cameo players, from Timothy Hutton as Lang's brusque lawyer, Eli Wallach as one of the Lang's stateside neighbors, and Tom Wilkinson as a shadowy past acquaintance.

The bottom line is that, after wallowing in "serious" material like 'The Pianist' and 'Oliver Twist,' Polanski is back in the thriller genre and having a great time. I honestly think that 'The Ghost Writer' is just as good as any of his "apartment trilogy" of movies that defined his career and today still mark his directorial highpoint. (Those movies are 'Repulsion,' 'The Tenant' and 'Rosemary's Baby.') While 'The Ghost Writer' lacks the bite that those movies had ('Ghost Writer' is a decidedly PG-13 affair), it still bristles with that raw imagination and unique combination of artistry and craftsmanship that will have you at the edge of your seat until the movie's final, unforgettable, moments.

The 50GB disc is Region "A" locked. It does auto-play, after which you're "treated" to a series of Summit trailer for things like 'Letters to Juliet' and 'Remember Me.' (Note to Summit: you're better at selling werewolf/vampire/human love stories than just straight love stories.) Annoying, this is a BD-50 Blu-ray/DVD "flipper" disc. On one side is a Blu-ray, on the other side is a DVD. This is the first time I had seen a disc like this in a while and when I popped it into the machine, I wondered if there would be any problems because of its extra-thickness (there weren't). Still, you've got to worry about the durability and longevity of a disc like this – and would it really have been that much more expensive to make a separate DVD disc and stick it in the case?

The 1080p AVC MPEG-4 AVC encoded transfer (2.35:1 aspect ratio) is just stunning. I kept looking at the image waiting for something to falter. "Maybe this next shadow won't be so dark and inky," I'd say to myself. Except, nope, nothing of the sort.

The image quality of 'The Ghost Writer' is just perfect. Skin tones look great, black levels are deep and nearly bottomless, the wintery vistas of the Northeast are perfectly captured (enough that you'll want to close your window), and despite an abundance of grain, there's a decidedly rich, cinematic look to the transfer. You feel like you're watching something substantial and tactile.

This is the kind of transfer that is subtle but perfect. Don't let the fact that there aren't any big special effects fool you; this is easily one of the best transfers I have seen this year. There's a moment when Ewan McGregor is riding through an abandoned seaside town in the middle of the night, and every shadow, every spot of light, and the look on his face – they're all pitch perfect. That's when I knew the power of this transfer. And you will too.

There are no buggy technical issues, either. Just wanted to get that out of the way, too.

The DTS-HD Master Audio 5.1 mix is also quite excellent. But there was one thing that I noticed on my theatrical go-around that I thought would be "fixed" on home video, but I'm sad to report that this is not the case.

There are a few moments in 'The Ghost Writer' when a character quite clearly utters the word "fuck." But each time this happens, they have replaced the "fuck" with something like "bloody" (it helps when all your characters are English). And this isn't in scenes where the character's mouth is obscured (or the exclamation comes off camera), no, there is one scene where Pierce Brosnan is looking right at the camera and clearly yells out a hearty "FUCK" but it's replaced with something else. This was obviously done to avoid an R rating, which I think is weird because this is such an adult movie, not in terms of overt sex or violence, but just in general tone and sense-of-humor. Nobody under 17 would want anything to do with this movie, glacially paced, thoughtful, quirky etc.

So I figured that the home video version would address this, fix it, and replace the damn "fucks." This isn't unprecedented. They could have released the movie "unrated," or, just slipped it in. I sincerely doubt the MPAA is watching every home video release to see if their rating sticks or if changes have been made between the theatrical and home video versions (especially when the changes would have been so microscopic). Famously, Paramount released the unrated "European" cut of Nic Roeg's masterpiece 'Don't Look Now,' but still maintained it's R-rating on the box.

But no. The horrible dubbed-in words are all present and accounted for. It really reeks of amateurism and spinelessness and is the one thing that really stuck in my craw about the movie. Worried that I was being my movie obsessive self and noticing things that nobody else would care about, I asked my girlfriend about it after we watched the movie. She caught it too. It was that obvious.

Anyway, besides this faux pas that could have been fixed, the track is quite lovely. There's good use of the surround field, Desplat's score sounds even more wonderful than it did in the theater, sound effects are clear but never overwhelming, and dialogue is always clear and crisp and well-prioritized (important for such a dialogue-heavy film). Atmospherically, things come into play occasionally, the norm for a suspense thriller (the crashing of ominous waves, a wintery breeze, etc).

The track is aces, except for those f-duds.

There is also a Spanish Dolby Digital 5.1 track and subtitles in English SDH and Spanish.

The extras on this disc were produced by the great Laurent Bouzereau and are the exact same on the standard DVD. You will enjoy them heartily, no matter the format. You'll also wish there were more of them!

If you couldn't tell already, I really loved Roman Polanksi's superb adult thriller 'The Ghost Writer.' It's unfortunate that everyone got caught up in the politics of Roman Polanski and overlooked this gem, because they don't really make them like this anymore. It's easily one of the director's best films and ranks alongside his "apartment trilogy" in that regard. Featuring wily performances by Ewan McGregor, Pierce Brosnan, and Olivia Williams, it's funny, human, and edge-of-your-seat thrilling! This disc features peerless audio and video and a couple of strong extra features (but only a couple!) This is the very definition of highly recommended – go buy it and then recommend it to friends! Get the word out! 'The Ghost Writer' is that good.

Sale Price 14.39
List Price 19.99
Buy Now
3rd Party 9.01
In Stock.
See what people are saying about this story or others
See Comments in Forum
Previous Next
Pre-Orders
Tomorrow's latest releases