Disgraced and retired mixed martial artist Wes "The Jailor" Baylor (Scott Adkins) couldn't refuse the million dollar purse offered to fight in Myanmar. When he arrives to fight, he learns he's been tricked into becoming the target of a human hunt. Carrying only water and a ruby-filled money belt for the last person standing, Wes must outsmart the heavily armed group who's paid to kill him. As Wes fights for his life in the treacherous jungle terrain, the hunters become the hunted. Hard Target 2 is a must see film for action and martial arts fans featuring Adkins in incredible fight scenes.

Some days you have got to appreciate a half-way decent direct to video sequel to a mid-1990s action flick. In concept, these sorts of films are the very definition of an unnecessary sequel - especially if they fail to bring back any of the stars of the original film. Nine times out of ten, this spells certain doom for the new film. However, in the case of 'Hard Target 2' starring Scott Adkins as the new prey for a bunch of rich hunters, there are exceptions to the rule. While hardly a great film, it delivers on the premise set in the first film and proves to be a better than average way to burn almost two hours.

Wes "The Jailor" Baylor (Scott Adkins) is at the top of the MMA ring. He's won countless bouts with his fast fists and high flying kicks. But when he accidentally kills his best friend and most recent opponent in the ring, Wes' meteoric rise to fame and fortune comes crashing down. While living in a self-imposed exile, Wes scratches together a living in the Thai underground fight scene. When the mysterious Aldrich (Robert Knepper) approaches him after a fight with the chance to earn a smooth half million dollars in rubies, Wes sees it as an opportunity to right a wrong and get his life back on track. What Wes thought was going to be a simple match turns into the fight for his life. Dropped deep into the Burmese jungle, Wes must evade a group of hunters over 100 miles to the Thai border if he hopes to keep the rubies and his life. Aldrich, along with the deadly Sofia (Rhona Mitra), Madden (Temuera Morrison) and the bullfighter Esparto (Adam Saunders) will use every piece of modern technology and an arsenal of advanced weaponry to make sure Wes never gets close to the border.

In all honesty, I thoroughly expected to hate 'Hard Target 2.' It's very name and the fact that there is a decided lack of Van Damme practically guaranteed that it would be a terrible movie. I wasn't expecting the filmmakers to actually make an earnest effort at concocting a good movie. Director Roel Reiné working from a script by Matt Harvey, Dominic Morgan, and George Huang manages to bring together a film that isn't just watchable - it's actually pretty damn entertaining too. It's not altogether a great movie, but it achieves what it sets out to do and showcases some impressive action sequences. 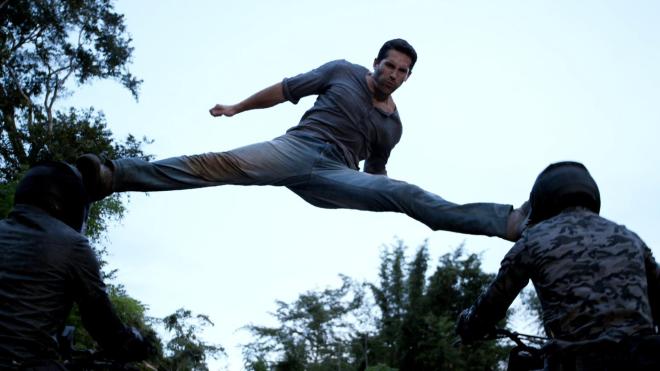 Scott Adkins proves yet again he's the go-to guy when it comes to budget action flicks. I'm still a bit mystified at how the man hasn't gotten higher up the action movie food chain than the direct to video market, but what he brings to the screen is usually pretty good. Here, he's in perfect form and delivers on the high flying slow motion kick, punch, shoot quota. Robert Knepper is clearly having a gas as Aldrich as he always finds some way to chew the scenery and steal the moment. Rhona Mitra is a bit of an oddity here. She's proven she can manage action really well, but her leather-clad dominatrix stylings that would seem better suited for a 'Resident Evil' movie are hilariously out of place in the middle of the jungle. Does she want to die from dehydration? There are other little plot ups and downs one could nitpick, but really it would be silly to gripe about them much when you consider the kind of film this is.

At its core, 'Hard Target 2' is more like a cousin to the original film. It's a sequel in plot only and has no direct connection to Van Damme's character or even Lance Henriksen's for that matter. Had this movie just called itself 'Hard Target: Rumble in the Jungle' or some other random subtitle, things might have worked a bit better. As a big fan of the original film, I was half ready for Van Damme or some other character from the original to pop up for a quick guest spot, but that didn't happen. Which is a shame really since Scott Adkins and Van Damme worked pretty well together for 'Universal Soldier: Day of Reckoning.' It would have been a kick (pun intended) to see them in this flick together. Thankfully there is a nice John Woo homage with some slow motion flying doves to look out for! At the end of the day, 'Hard Target 2' is diverting turn-off-the-brain entertainment. Nothing more, nothing less.

'Hard Target 2' arrives on Blu-ray courtesy of Universal Home Video in a 2-disc Blu-ray and DVD set. The film is pressed onto a BD50 disc and housed in a standard 2-disc Blu-ray case with identical slip cover. The disc opens with trailers for other upcoming Universal releases before arriving at a static image main menu with traditional navigation options. Also included in this set is an Ultraviolet Digital HD voucher slip.

Shot digitally, 'Hard Target 2' gets a lot of mileage out of its 1.78:1 1080p transfer. Most of the image is pretty great looking with sharp detail levels, bright and beautiful colors with plenty of primary presence, and some deep inky black levels. Where the image can suffer a bit is from consistency. Whenever a different camera was used for drone footage or a cable camera rig, the image can soften a bit and lose the clarity that the production grade cameras offer. Thankfully those scenes are relatively brief. Some CGI elements don't really blend well as they can be a bit softer, but otherwise, this is a stable looking image. There isn't much of a problem with motion blur or any kind of compression anomalies or video noise to report.

'Hard Target 2' comes packed with a strong English DTS-HD MA 5.1 audio mix. Since this is such an action heavy film, the surrounds get a nice auditory workout. Gun shots, explosions, yells, grunts, knife stabs - all come through with terrific clarity. This isn't exactly a dialogue-driven film, really you're meant to enjoy the kicks and punches, but thankfully the mix keeps dialogue to the front/center channels so the rest of the surround channels can focus on sound effects and music. Sound effects do a great job at providing a sense of atmosphere and dimension to the track - especially when the action moves to the jungle and the sense of immersion picks up. All around a great audio track for a small little action movie like this.

Audio Commentary: This is a packed commentary track featuring Scott Adkins, Director/DP Roel Reiné, Robert Knepper, Composer Trevor Morris, and camera operator Rolf Dekens. It's a fine audio commentary, Roel is the only one in the recording studio, Adkins, and the others are on his speaker phone so it's kinda fun in that respect.

Deleted Scenes: (HD 9:47) Some of this material is actually pretty good. Some genuinely decent character development stuff that could have been left in and was probably only taken out to keep the runtime down.

Deleted Shots Montage: (HD 1:59) This is mostly some simple cut shots of the scenery, nothing too amazing since a lot of it is in the main film already.

A Fighting Chance: Behind the Scenes of 'Hard Target 2': (HD 5:13) This is a pretty standard behind the scenes, EPK bonus feature with cast and crew interviews.

'Hard Target 2' Through The Lens: (HD 2:43) This is a quick look at the shooting of the film with Director and DP Roel Reiné.

Into The Jungle: On Location of 'Hard Target 2': (HD 2:25) This is another brief but very cool behind the scenes look at shooting in Thailand and the local jungle locations.

Thrill of the Hunt: (HD 3:13) This is a quick cast/crew interview extra feature with your typical but informative EPK extra feature. It looks like some of the cast were in character for these interviews so it's a little funny.

It's perfectly natural to read a title like 'Hard Target 2' and expect a pretty bad direct to video action movie. It's been 23 years since the first film hit theaters and the lack of Van Damme would also be indicators for certain doom. Surprisingly, the film is actually watchable and entertaining! Maybe it had to do with lowered expectations but overall 'Hard Target 2' delivers the fun and excitement for a low budget straight to video movie. Certainly better than the average in that department. Universal has done a bang up job bringing this movie to Blu-ray as it sports a solid A/V presentation as well as a host of extra features. If you're a fan of Scott Adkins or were curious to see a sequel to 'Hard Target,' you can consider 'Hard Target 2' worth a look. Obviously, it's not for everyone, but if you want to have something fun to watch, this is a good brainless way to spend an evening.

Sale Price 4
List Price 14.98
Buy Now
3rd Party 4
In stock. Usually ships within 2 to 3 days.
See what people are saying about this story or others
See Comments in Forum
Previous Next
Pre-Orders
Tomorrow's latest releases