Sheriff Kilpatrick makes sure his town lives by the rule of the law. "We must not allow guns to do our thinking for us," he decrees. But even a man as determined as Kilpatrick has his limits. When marauding outlaws kill his wife and his son, he invokes a new rule: the rule of the gun.

Richard Harris (A Man Called Horse, Unforgiven) portrays Kilpatrick, a deadly tracker seeking revenge. Kilpatrick is single-minded, unsparing, bullet-hard. Although his badge gives him no jurisdiction in Mexico, he still carries his pursuit across the border. Rod Taylor (Inglourious Basterds) plays Brand, a killer among killers, the murderous gang's leader. The bad-guy role is a departure for Taylor, and he makes the most of it with gusto. His slaughter of the English language is exceeded only by the human slaughter he leaves in his wake.

The Deadly Trackers bears the explosive imprint of two action-movie specialists: director Barry Shear (Wild in the Streets, Across 110th Street) and screenwriter Lukas Heller (The Dirty Dozen, The Flight of the Phoenix). In their hands it becomes a heart-pounding adventure of justice at any cost. Where the law ends, The Deadly Trackers begins.

It's tough to stay in a positive frame of mind while you watch a movie and you are constantly second guessing the filmmakers' creative decisions. Why did they open the movie this way? Why did they have the lead character take that action? Why is the music so out of place in this scene, are they trying to be ironic? When you catch yourself asking these questions when you should be enjoying a movie, that can really only mean that the film is falling apart and your suspension of disbelief is constantly being broken. Alas, this is the problem that constantly keeps Barry Shear's 1973 revenge western 'The Deadly Trackers' starring Richard Harris, Rod Taylor, and Al Lettieri from being the great film it easily could have been.

It isn't every day you encounter a sheriff of a bustling Texas town who doesn't wear a gun. But, if you dropped by Santa Rosa, you would run into Sheriff Sean Kilpatrick (Richard Harris), an Irish pacifist who doesn't believe in killing - or wearing a gun on his belt. As he explains to his young son, it's an easy way out of a complication. Because the stories of a gunless sheriff have spread throughout the state, Frank Brand (Rod Taylor) and his gang decide the bank at Santa Rosa is the perfect place to rob a quick buck. At first, Kilpatrick and his deputies have Brand's gang taken dead to rights, they were ready for them. But when Frank makes it into the school house and takes Kilpatrick's son hostage, the Sheriff has to let the bandits go with the loot. On their way out of town, Frank kills Kilpatrick's wife and son leaving the pacifist sheriff broken and hell-bent on revenge.

After tracking Brand and the rest of the gang deep into Mexico, Kilpatrick must deal with the local law a man called Gutierrez (Al Lettieri). Gutierrez sympathizes with Kilpatrick's situation, but he's a firm believer in law and order. Brand is wanted in Mexico and will be brought to justice, alive. Since Kilpatrick wants Brand and his gang dead for what they did, the two lawmen will have to outmaneuver one another in order to reach Brand first. 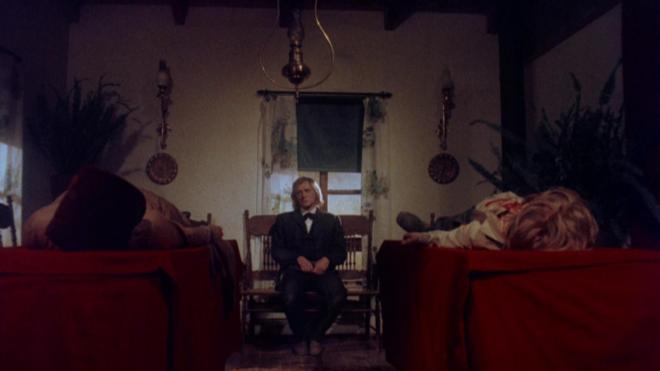 It doesn't take long for 'The Deadly Trackers' to get going before you start to feel the tinkering. The film opens with a very strange narration over still images of the town setting the stage for the conflict to come. Then while the bizarre still images continue, we watch entire scenes of backstory and character development haphazardly stumbles together before Brand and his gang finally rides in and starts shooting up the place. While that burst of excitement is very welcome, the film's inconsistencies start running the story aground. Once Sheriff Kilpatrick decides to break the law and head into Mexico on his own, the film awkwardly jumps back and forth between Brand and his band of cutthroats and the deranged vengeful sheriff. As the film progresses like this, you start to wonder what the conditions were while filming. So much of what happens feels rushed or made up on the spot as if director Barry Shear and his screenwriter Lukas Heller had to cobble the story together as they went along.

While I can usually forgive a film's little presentations rumble and tumbles, as 'The Deadly Trackers' plods along, it becomes harder and harder to be too forgiving. There is a great movie in here somewhere, but it gets lost under the weight of some bad editing and overly simplistic - and in some cases unnecessary - characterization. Characters who shouldn't have a backstory get too much screen time to explain who they are, or why they have a piece of railroad rail for a hand while important characters like Richard Harris' Kilpatrick, Rod Taylor's Brand or Al Lettieri's Gutierrez are unfortunately underwritten. We should know why Kilpatrick was a pacifist so we feel his resorting to violence as an understandable but unfortunate downfall of an honorable man. We should know why Brand is the way he is but we don't get anything of substance. We should know why Gutierrez stands by the law even if it means letting a known murderer go free. We should know all of that, but the film doesn't give us that. Instead, it routinely cuts away in the middle of conversations leaving us hanging and hankering for some great material.

This isn't to say that 'The Deadly Trackers' is a complete loss either. If you like some well-executed action sequences, this film delivers. Richard Harris is great as Kilpatrick and he brings a genuine emotional weight to the role. Likewise, Al Lettieri is equally impressive as Gutierrez. The two actors play similar men with the same goal but fighting for different outcomes. 'The Deadly Trackers' would have been wise to let these two great actors share more screen time because that's where the film is at its strongest. Rod Taylor is equally impressive as the sadistic Brand - especially because I've always seen him play more stately and refined characters as he does in 'The Birds' and 'The Time Machine.' It's fun to see him play such an unlikable character for a change. Ultimately, 'The Deadly Trackers' is a far from perfect film, but it does manage to deliver some good old west action and adventure with some fine performances. Had the film been a little more refined during the pre-production process, I'm sure a lot of the oddities that hold it back would have been ironed out.

'The Deadly Trackers' arrives on Blu-ray courtesy of the Warner Archive Collection. Pressed onto a Region Free BD50 disc, the disc is housed in a traditional Blu-ray case. The disc opens directly to a static image main menu featuring traditional navigation options.

With a 1.78:1 1080p transfer, 'The Deadly Trackers' is a tough one to grade. Part of the issues facing the transfer are backed in. Because of its rushed production, a number of scenes were either under lit or over lit - and it's painfully obvious as the grain field can fluctuate from scene to scene with some pretty glaring white blooms. Colors are over all pretty good, they have their pop and appreciable range, but again due to some of the lighting issues, accuracy can fluctuate. The bright red goopy fake blood is particularly impressive. Flesh tones look natural throughout. Black levels never quite approach inky black, but there aren't any crush issues to speak of but depth can be limited depending on the scene. There are also several scenes that look as if the shot was originally a wide or middle shot that was optically zoomed in to be a close up resulting in a number of scenes that look overly soft and out of focus. As I said, it's hard to know what is the fault of the transfer or were just baked into the film itself. At the end of the day, 'The Deadly Trackers' looks pretty good and very possible as good as it possibly could ever look with this Blu-ray presentation.

'The Deadly Trackers' comes with a stable, if somewhat unimpressive DTS-HD MA 2.0 audio track. Dialogue, for the most part, is clear and audible throughout. The tough part is if the scene in question is quiet and somber, particularly the scenes between Richard Harris and Al Lettieri as between them, there is a lot of meaningful whispering. During these moments you may feel the need to adjust your volume to get the full range of what is being said. Sound effects work well for the bigger action sequences and help give the scene a sense of space and dimension, but they can only go so far. A number of scenes sound as if they were completely dubbed over in post as each footfall, a voice, or gunshot is just a hair out of sync. The score by Fred Steiner also can be a bit intrusive at times as it can drown out other elements, thankfully no dialogue is seriously lost, but again, you may need to keep an eye on your levels. At the end of the day, this track gets the job done.

'The Deadly Trackers' is a case of "could have been great." It sounds like there was once a great movie in the works but due to some cast and crew shuffling and other issues, that movie was lost and this craggy beast is what emerged. That isn't to say 'The Deadly Trackers' is unwatchable, it's actually pretty entertaining and Richard Harris is fantastic - so it's worth watching, but you may not be entirely satisfied. Warner Archive Collection brings the film to Blu-ray with a serviceable A/V presentation, it doesn't look or sound amazing but is a clear upgrade over the DVD release. Give this one a rent to make sure you're a fan before purchasing.

Sale Price 17.29
Buy Now
3rd Party 17.29
In Stock.
See what people are saying about this story or others
See Comments in Forum
Previous Next
Pre-Orders
Tomorrow's latest releases