Keegan-Michael Key and Jordan Peele, a.k.a. the hugely popular comedy duo Key & Peele, star as Clarence and Rell, two cousins who live in the city but are far from streetwise. When Rell's beloved kitten, Keanu, is catnapped, the hopelessly straight-laced pair must impersonate ruthless killers in order to infiltrate a street gang and retrieve the purloined feline. But the incredibly adorable kitten becomes so coveted that the fight over his custody creates a gang war, forcing our two unwitting heroes to take the law into their own hands.

In 'Keanu,' two heavily-armed men enter an undisclosed church that's used as a drug-processing facility and kill everyone on sight without being harmed in the least. The entire action sequence ambitiously aspires for the fragrantly dramatic, something deliberately reminiscent of a John Woo movie with the acrobatic shootouts and the slow-motion exploits that make the whole thing seem visually graceful. On the one hand, the sequence comically sets up the plot as a little kitten runs from the pandemonium — also in slow-motion — as bullets, money and white powder fly through the air. And on the other hand, the elegantly choreographed gunfight is also meant to sell the audience on the tabby's adorableness and captivating sweetness, which it absolutely does, instilling a bit of fear for the kitty's safety in this viewer. Apparently, the cat is so cute it brings the mayhem to a standstill and for a moment, warms the hearts of the callous, cold-blooded killers known as the "Allentown Boys." The original owner and druglord even bargains it for his life before police show up, causing another shootout and for the kitty to runaway.

Soon after, the cat finds sanctuary with recently-dumped sad sap Rell (Jordan Peele), who in a couple weeks grows a bit too close for comfort with his new pet, which he's named Keanu, while training it to scratch the picture of his ex. "Get that bitch!" he commands as he leaves the house with his best friend Clarence (Keegan-Michael Key) to watch the latest Liam Neeson actioner "Substitute Teacher," one of several pop-culture gags cleverly strewn throughout this surprisingly funny buddy comedy. After the movie, the two amusingly compare who grew up in the harder neighborhood, New York City or Detroit, but the twist is on which fell victim to the bigger bully. The answer to this pair of suburbanites' query is obviously neither, especially when they argue over listening to N.W.A. over George Michael, ending with Rell nervously lowering the volume on "Fuck tha Police" as a cruiser rolls up beside them. It's this banter that goes on for several minutes between Key and Peele, friends and collaborators since their time on MadTV, that make for much of the hilarious delight behind the movie's silly premise. Their chemistry is genuinely lively, feeding each other's energy with a clownish gusto that effortlessly breeds laughter. 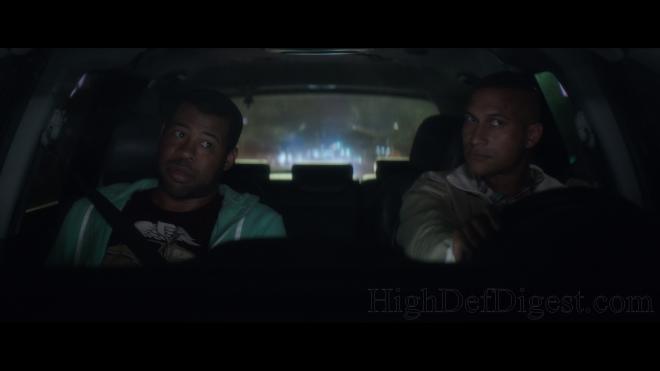 Such exchanges between the two comedians also reveal the cleverness behind the smartly designed script, which Peele wrote with another fellow collaborator Alex Rubens. As though just graduating a course on screenwriting, each of those moments making up the first act are carefully placed plot devices that come up again later. They're little tidbits of exposition that should give rise to more laughter as the story progresses and these bumbling dolts somehow manage to survive a night with dangerous criminals and ruthless drug dealers. The only experience Rell and Clarence have with thugs and the hood is what they've seen in movies, but in order to save Keanu, which was kidnapped by gang leader Cheddar (Method Man), who also fell for the kitty's charming cuteness, they play the stereotypical parts. And it's all the funnier because they convincingly play their parts as the Allentown Boys when provoked by personal issues: Rell's love for the cat, which was amusingly named after Mr. Reeves and voiced by the actor during a hilarious drug-induced dream sequence, and Clarence feeling protective for his wife (Nia Long).

'Keanu' carries an air of zany absurdity that's right in tune with the two stars' sketch comedy hit 'Key & Peele,' which is probably not surprising since many of the same folks who worked on that Comedy Central program provided their services for this production. This even includes the film's director Peter Atencio, who directed the two comedians during the show's three-year run. Atencio takes advantage of their already established repertoire and well-timed camaraderie, knowing when either one delivers even the subtlest of jokes and allowing them to react to their situation, be it comedic or emotionally driven. A hysterical highlight is when Key argues for George Michael's thugness to three bewildered gang members (Jason Mitchell, Darrell Britt-Gibson and Jamar Malachi Neighbors). Meanwhile, Peele clumsily teaches Hi-C (Tiffany Haddish) on how to broker a drug deal with a geeked out of her skull Anna Faris. Sadly, the movie is not without its share of duds — a confrontation with Luis Guzmán's Mexican cartel boss brings the pacing to a slow crawl — but by film's end, the buddy comedy proves its worth with thuggish swagger.

Warner Home Video brings 'Keanu' to Blu-ray on a Region Free, BD50 disc with a code for an UltraViolet Digital Copy. The disc and flyer are housed inside a blue, eco-cutout case. After a short promo and trailers, viewers are taken to a static menu screen with generic options on the bottom.

The fight for the world's cutest kitten goes full gangsta with a cracking and banging 1080p/AVC MPEG-4 encode, presented in a 2.40:1 aspect ratio. Shot entirely on the Arri Alexa digital camera system, the freshly-minted transfer arrives with several demo-worthy moments during daylight sequences, which is to be expected. It's a highly detailed presentation, exposing every nook and cranny inside the Blips' strip joint hideaway, from the paint chipping and tiny pockmarks on the walls to the minor flaws along the bar and the lettering on the labels of bottles. Exteriors shots are most impressive, showing razor sharp lines in individual leaves and the tree bark, while the stitching and design pattern in the two friends' suburban clothes. Facial complexions appear healthy with revealing, lifelike textures in the faces of the entire cast. Primaries are richly-saturated and animated, especially the green in the surrounding foliage and the blue in the clear skies, while secondary hues are glowing and colorful, complementing the comedy with a spirited atmosphere.

On the whole, the transfer makes for a great high-def presentation with much to enjoy and some scenes even rise to the level of demo-worthy. But the video also comes with the usual sterile, digital look that's largely unappealing when the cinematography is somewhat run-of-the-mill and routinely straightforward. Also typical of digital photography, the picture lacks consistency from scene to scene. Contrast is mostly spot-on and comfortable, but a few nighttime sequences and low-lit interiors tend to look a bit dull and highlights occasionally bloom. Brightness levels, for the most part, are also well-balanced with generally accurate blacks throughout and strong, visible details in the darkest portions of the frame, but shadows sometimes appear murky and washed-out, creating a somewhat flat, two-dimensional image. And finally, a few moments are softer and noticeably blurrier than others, but overall, it's a great picture quality.

The crazy rescue mission into the hood is strapped with an excellent DTS-HD Master Audio soundtrack that brings the thug life home. A few subtle atmospherics are scattered throughout, like the voices of drunk, partying patrons inside the strip club or the noise of city traffic in the distance. But weirdly, they're not very consistent or don't effectively envelop the listener. On the other hand, a couple action sequences employ the surrounds with bullets ricocheting off walls and showering the room with light debris. Not surprisingly, the hip-hop music and song selections make better use of the entire system, bleeding into the background and immersing the viewers with a more satisfying soundfield. All the while, the design enjoys a boisterously rowdy and punchy bass, providing the track with a great deal of weight and depth.

Much of the legwork and activity is actually contained in the soundstage, generating an engagingly broad and expansive environment. Imaging feels spacious with background noises occupying all three front channels and flawlessly panning across the screen. The mid-range is remarkably extensive and dynamic, delivering clean, room-penetrating clarity with discrete detailing during even the loudest segments. Amid the silly chaos, vocals remain intelligible and precise in center, making for a terrific lossless mix.

From the stars and creators of the hits sketch comedy series, 'Keanu' is a surprisingly funny buddy comedy starring Keegan-Michael Key and Jordan Peele. A story of mistaken identity mixed with satirical jabs of urban street life, the tale takes cues from action movies like 'Taken' and others while giving a pair of suburbanites a life-changing experience for the sake of possibly the world's cutest kitten. The Blu-ray arrives with an excellent audio and video presentation, but the supplements are sadly lacking. Still, the overall package is recommended for fans of the comedians and a strong rental for the curious.

Sale Price 2.4
List Price 10.98
Buy Now
3rd Party 2.4
In Stock.
See what people are saying about this story or others
See Comments in Forum
Previous Next
Pre-Orders
Tomorrow's latest releases