The story follows a one-time bullied geek, Bob (Dwayne Johnson), who grew up to be a lethal CIA agent, coming home for his high school reunion. Claiming to be on a top-secret case, Bob enlists the help of former “big man on campus,” Calvin (Kevin Hart), now an accountant who misses his glory days. But before the staid numbers-cruncher realizes what he’s getting into, it’s too late to get out, as his increasingly unpredictable new friend drags him through a world of shoot-outs, double-crosses and espionage that could get them both killed in more ways than Calvin can count.

Hiding beneath all the piercing gunfire, the deep hollowed thuds of punches, the fiercely urgent car chases and the rapid-fire, spur-of-the-moment jokes, 'Central Intelligence' arrives with several surprises, starting with the fact that I enjoyed a Kevin Hart movie. In the last four years since his career suddenly ballooned into A-list status, none of Hart's comedies have impressed or been remotely memorable because they mostly involve the exact same shtick. A short, overly-confident loudmouth who screams wisecracks for self-defense and suddenly turns into a shrieking, bumbling scaredy-cat when a situation becomes threatening. With Will Ferrell seeming like a lumbering giant next to Hart, 'Get Hard' came close in allowing audiences to see the actor hiding underneath the clown. And here, opposite a surprisingly hilarious Dwayne Johnson, the comedian demonstrates he can actually act, though he still sadly relies on screaming hysteria fits for producing laughter on various occasions. For once, he plays the calm, sensible straight man Calvin Joyner without seeming artificial, which then justifies his frenzied panic screams when things become overwhelmingly dangerous. Which they do often.

Mr. Hart graciously passes the clownish buffoonery torch to Johnson, who, like Ferrell, towers over his costar, which serves as the source of various jokes throughout. During one rescue scene inside an office, Johnson, like some mythological gladiator hero, pushes a panicking Hart in a canvas mail cart like a stroller. Part of the joke is the intimidatingly huge star of the 'Fast & Furious' franchise wearing a gaudy yellow T-shirt and cargo shorts during the mayhem while completely ignoring his friend's pleas to stop. But the real payoff comes moments later when, disguised as a marriage counselor in a sweater vest, the retired professional wrestler cradles the noticeably smaller Hart like a baby. Well planned and timed gags such as this keep the movie from losing momentum, like little bread crumbs subtly dropped at various spots and recalled later for a bigger and funnier punch line. A favorite highlight is an unexpected cameo playing the role of Darla McGuckian, a high school crush mentioned only a few times but produces one of the best laughs during the denouement. Other such nuggets are strewn throughout to keep audiences on their toes. 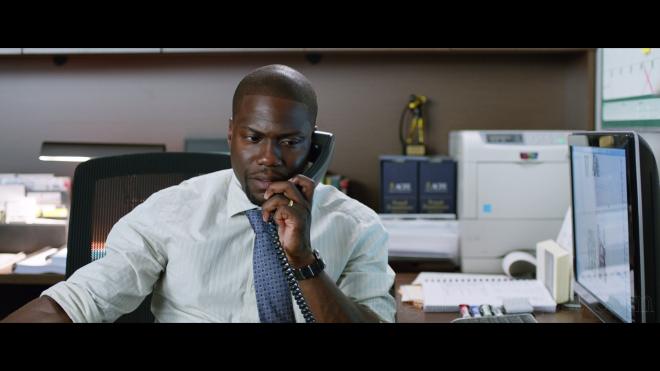 Best of all, and arguably the primary reason for even watching this absurd comedy, is Johnson as Robbie Wheirdicht, aka Bob Stone. The character is introduced in the opening moments alone in the boy's shower dancing to En Vogue, Johnson's face digitally placed on an overweight body. But the laughs quickly turn into humiliation when another teen and his friends carry the naked Robbie into a senior assembly, permanently scarring him. Twenty years later, he's miraculously transformed into a muscular giant who earnestly loves unicorns and sports a fanny pack. Proudly revealing his doofus side, Johnson embraces this delightful lug with sincere enthusiasm that never seems satirical or over-the-top. Meanwhile, Hart shows he can be just as funny as a married accountant who was once the most popular kid in high school but feels his life plateaued and whooshing downhill. The two are brought together by a school reunion coinciding with Stone's CIA investigation to stop a terrorist from selling satellite codes. While chased by 'The Office' star Amy Ryan, it's Johnson's seeming the incompetent dweeb that generates much of the humor, and Hart receives the excitement his midlife crisis begged for.

But in spite of all this, 'Central Intelligence' is not without some questionable blunders in its reevaluation of life after high school. 'Dodgeball' and 'We're the Millers' director Rawson Marshall Thurber does great in maintaining an energetic pace and taking advantage of the animated chemistry between the two stars, allowing them to simply play off one another. But there is also something a bit too routine and familiar, which is not surprising since this is standard odd-couple buddy-cop formula. The hilarious, off-the-cuff banter can't hide the movie's predictability — Johnson will prove his innocence, Hart will discover a new career and the villain is known the moment he appears on screen. However, Ike Barinholtz and David Stassen's script make up for this by injecting the plot with one final surprise. Although brave to profess his love of unicorns and 'Sixteen Candles' while remaining cool under pressure, Johnson's Robbie is still the traumatized and bullied fat kid of high school struggling to be the confident person inside as he appears on the outside. It's this "I hate bullies" theme and Johnson's performance to overcome his fears that ultimately makes this comedy so endearingly charming.

Warner Home Video brings 'Central Ingelligence' to Blu-ray on a Region Free, BD50 disc with a code for an UltraViolet Digital Copy. The disc and flyer are housed inside a blue, eco-cutout case. After a short promo and trailer, viewers are taken to a static screen with options along the bottom. At the main menu, viewers can choose between the 107-minute theatrical version or the 116-minute unrated cut, which features adult language and a few, minor additional scenes.

Shot on the Arri Alexa XT digital cameras, facial complexions are most impressive and lifelike, as close-ups of Kevin Hart reveal the tiniest, negligible blemishes while Dwayne Johnson is finally starting to show winkles when he's not smiling. Viewers can plainly make out individual hairs in Hart's five o'clock shadow and see the threading in Johnson's silly Goodwill shirts and the subtle creases in his fanny pack from age. Lettering on signs along buildings and on bottles are legible while the texture in clothing and walls look realistic.

Presented in a 2.40:1 aspect ratio, the squeaky-clean transfer also arrives with spot-on, pitch-perfect contrast, keeping the picture bright and lively with superb visibility of background info. Black levels are true and accurate, as well, with deep, penetrating shadows that never obscure the finest details, providing the image with appreciable depth from beginning to end. Topping it all off are lush, richly-saturated colors washing over the video, making for a lively, animated presentation that fits perfectly with the movie's silly humor.

The buddy-cop blockbuster comes out of hiding with a more impressive, near-reference DTS-HD Master Audio soundtrack that makes great use of the entire soundscape. The rears are continuously employed throughout the movie's runtime. During action sequences, cars zoom from the sides and into the screen, or bullets flawlessly whizz from one speaker to the next. Quieter moments continue delivering an immersive soundfield with the subtle noises of traffic in the distance or the crowded energy of people chatting and typing inside an office. It makes for an amusing watch while adding a layered, spirited feel to the visuals.

Holding the lossless mix from a perfect score is a somewhat ordinary, if not middling, low-end that doesn't really standout in any impressive way or provide much weight to the action or certain song selections. That's not to say, the design doesn't come with bass because it does and a few moments dig just below the mid-bass. Only, what little we hear isn't the sort of palpable wallop or with the decibels one would expect from an action movie (bass chart).

On the other hand, imaging feels spacious and expansive with appreciable clarity and detailing while delivering excellent vocals in the center. But sadly, the lossless mix comes with a few caveats worth noting. There are several instances of clipping in the upper ranges, making many of the action sequences ear-piercingly bright, which is somewhat distracting.

Hiding beneath the gunfire, the punches, the car chases and the rapid-fire jokes, 'Central Intelligence' arrives with several surprises, most notably Dwayne Johnson's performance as an insecure but oddly confident secret agent. Costarring Kevin Hart playing the straight man to Johnson's nerdy clown, the movie is the standard buddy-cop flick with some intelligence. The Blu-ray arrives with a stunning, reference-quality video and an excellent lossless audio presentation. Accompanied by a nice collection of supplements, the overall package is worth checking for fans and the curious.

Sale Price 6.6
List Price 9.97
Buy Now
3rd Party 29.99
In Stock.
See what people are saying about this story or others
See Comments in Forum
Previous Next
Pre-Orders
Tomorrow's latest releases