Night Train to Munich, from writers Frank Launder and Sidney Gilliat and director Carol Reed, is a twisting, turning, cloak-and-dagger delight. Paced like an out-of-control locomotive, this gripping, occasionally comic confection takes viewers on a World War II–era journey from Prague to England to the Swiss Alps, as Nazis pursue a Czech scientist and his daughter (Margaret Lockwood), who are being aided by a debonair British undercover agent, played by Rex Harrison. This captivating adventure—which also featuresCasablanca’s Paul Henreid—mixes comedy, romance, and thrills with enough skill and cleverness to give the Master of Suspense himself pause.

Wartime films are practically a genre unto themselves. During the early years of World War II, England had an interesting corner on the market. After the Dunkirk evacuation, they were the final line of defense against Hitler's eastern expansion. In order to keep morale up on the home front, all efforts were focused on providing the people of England with entertainment that would spur their sense of patriotism. Even smaller little thrillers like Carol Reed's 1940 film 'Night Train to Munich' starring Rex Harrison, Paul Henreid, and Margaret Lockwood provided audiences with some action adventure thrills and chills while working to bolster English patriotism.

On the eve of Germany's invasion of Poland, the world waits with bated breath. Czechoslovakia is in Germany's crosshairs and for brilliant scientist Axel Bomasch (James Harcourt), the recent German military movements are especially troubling. As an inventor of a sturdy and lightweight armor plating, Bomasch and his daughter Anna (Margaret Lockwood) are of particular importance to Germany's plans for world domination. Because of this, England's European spy network goes to great lengths to ensure that Bomasch and his daughter escape the clutches of the Germans. What English intelligence didn't expect was Germany playing their trump card in the form of Karl Marsen (Paul Henreid).

Marsen embeds himself with Bomasch as a double agent to learn England's defense capabilities and kidnap the scientist and his daughter. With a narrow window to retrieve Bomasch and his daughter before the Germans are able to extradite them deeper into German territory, secret agent Dickie Randall (Rex Harrison) is activated and sent in to pose as a German military officer. Now deep behind enemy lines, Radall must figure out a way to get close to Bomasch and Anna and get them both out of Germany through Switzerland and away from the cunning Marsen. 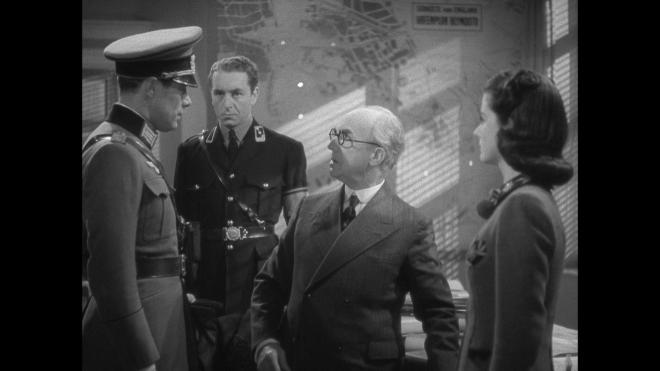 From a screenplay by Sidney Gilliant and Frank Launder, 'Night Train to Munich' plays very similarly to their previous effort for Alfred Hitchcock, 1938's 'The Lady Vanishes.' A kidnapping, a train, a daring escape, Margaret Lockwood - all are familiar elements but for 'Night Train to Munich,' they're given a very unique flavor to reflect the current climate of world affairs. When war was about to break out and engulf the country, quality entertainment was in short supply. On one hand resources and talent were being redistributed towards war preparations, but on the other hand, it was important for the people to be reminded exactly why they were about to go to war. Thus movies like 'Night Train to Munich,' Fritz Lang's 1941 film 'Man Hunt,' and Laurence Olivier's 1944 adaptation of 'Henry V' were made. Some were more earnest, some were more fanciful, but the intentions were always the same - entertain and reinforce people's patriotism towards the cause.

There's a lot about 'Night Train to Munich' that could be written off as a tad bit goofy. At the top of the list would probably have to be Rex Harrison's exceedingly silly German accent. His accent is so shrill, so cartoonish, that it's impossible to believe that any supposed German military officer would be fooled by it. On top of that, there is the level of heightened buffoonery and ineptitude that the Germans could even be fooled by someone masquerading as a high-ranking military officer who postures to have the ear of Hitler himself. But when you consider everything, that's also the point of the entire endeavor. As often as the United States were producing wartime comedies with the Three Stooges confounding the Japanese or Germans with their antics, Rex Harrison was doing the same thing in 'Night Train to Munich.' It's a device that is intended to give the audience the idea of their intellectual superiority over the enemy. "If one man can outsmart the enemy, together we can defeat the enemy," being the operational mindset.

While it's important to keep the political context of the film in mind, you also have to take a step back and appreciate the fact that Carol Reed along with his screenwriters Sidney Gilliant and Frank Launder manage to craft a simple but effective thriller that keeps you on the edge of your seat. From the opening concentration camp escape to the kidnapping of Bomasch and his daughter Anna to the climactic chase on a ski lift gondola in the Swiss Alps, the film always finds a way to keep the level of suspense rising without becoming so cartoonish as to be unbelievable. There's a very good reason why this film is often compared to Hitchcock's best efforts. It may not quite rise to the same level of '39 Steps' or 'The Lady Vanishes,' but 'Night Train to Munich' holds its own in that crowded company.

Speaking of that ski lift gondola, 'Night Train to Munich' holds a special place in my heart. Because my grandfather passed away when I was around eight or nine years old, I don't have many clear memories of him. I have a few trace memories of specific events and that's it. One of those trace memories turns out to be the climax of this film. I remember sitting next to my grandfather and watching an older movie that had nazis and a big action scene on a gondola and my grandfather being endlessly entertained by it. For years I tried to figure out what movie had a guy jumping from one gondola cart to the other while dodging gunfire from the Nazis but couldn't remember the details. For a long time I thought it was 'Where Eagles Dare,' but that never felt quite right. One random day I checked the DVD of 'Night Train to Munich' out from the library and almost immediately memories of the film came washing over me. Little bits and pieces of the film started coming back and by the time the climax arrived, I knew I had finally found the film that had dogged my brain for years. I still can't remember the specifics of how my grandfather was watching the film - he didn't own a VCR - or why it was on TV since it was probably a holiday, but now I know what it is and I can put it on any time I want. 'Night Train to Munich' may not be the best wartime thriller of the era, but it is damn good entertainment and if you've never given this one a look, I strongly suggest you carve some time out of your watchlist schedule to make room for it. I can't guarantee you'll come away with such strong feelings towards it as I did when I was a little kid, but I'm sure the film will leave you satisfied and entertained.

'Night Train to Munich' arrives on Blu-ray courtesy of The Criterion Collection. Pressed onto a Region A locked BD50 disc, the disc is housed in a standard clear Blu-ray case and comes with a booklet featuring an essay by film critic Philip Kemp. The disc opens directly to a static image main menu featuring traditional navigation options.

'Night Train to Munich' makes a pleasing leap to Blu-ray with a very good looking 1.33:1 1080p transfer. My memories of the previous Criterion DVD were always pretty good, but the image tended to look a bit soft with some scratches and speckling. This newly restored transfer appears to have corrected some of these issues. Fine film grain is apparent and stable throughout leading to an impressive uptick in clarity and detail levels. Some of the miniature models used to establish locations look incredible now. Black levels, greyscale, and contrast levels are stable, some scenes look a little better than most, but over all, everything looks great. There are some hot contrast moments, but thankfully those are only for a couple short seconds. Just from the detail levels and the improved quality of the source print, 'Night Train to Munich' is a welcome sight on Blu-ray.

With an uncompressed LPCM Mono track, 'Night Train to Munich' sounds pretty fantastic for a film of this vintage. At over 70 years old, the audio is free of any serious hiss and any breaks, dropouts, or pops are completely absent. Dialogue comes through with fantastic clarity although with the caveat that the quality of this presentation is indicative of the recording and processing equipment of the era. At times, voices can sound rather shrill without any lower tone nuance. Scoring and sound effects come through just fine. Imaging can feel a bit directionless at times, but then again this wasn't recorded or mixed with stereo in mind. Levels are just fine as the film manages lower registers and quiet moments and then sudden spikes in sound and action without any need to adjust the volume. All around this is a pretty fantastic audio track.

Bruce Babington and Peter Evans Conversation: (HD 29:22) This is a fascinating and informative little bonus feature that breaks down the genesis of the film, details about writers Sidney Gilliant and Frank Launder, as well as the numerous title changes due to the political climate of the era.

It's always a good day when an old favorite arrives on Blu-ray and it's even better when it looks and sounds fantastic. 'Night Train to Munich' holds a lot of sentimental value - so much so that I readily admit that it may color my appreciation of the film a bit, but even still, it's a great piece of wartime entertainment. The Criterion Collection bumps this great title up from DVD to Blu-ray with a solid A/V presentation. Sadly extra features are a little slim, but the conversation between film scholars Bruce Babington and Peter Evans is a worthwhile watch. I'm calling 'Night Train to Munich' recommended. I'm already looking forward to watching this great movie all over again.

Sale Price 20.77
List Price 39.95
Buy Now
3rd Party 20.77
In Stock.
See what people are saying about this story or others
See Comments in Forum
Previous Next
Pre-Orders
Tomorrow's latest releases