An aging, reclusive Southern belle, plagued by a horrifying family secret, descends into madness after the arrival of a lost relative.

Ever since Warner released 'What Ever Happened to Baby Jane?' on Blu-ray a few years ago, fans of over-the-hill-Golden-Age-diva-thrillers have been clamoring for its sister film, 'Hush...Hush, Sweet Charlotte,' to get the same high-def treatment. Well, at last, Twilight Time (with a little help from 20th Century-Fox) has obliged, and while this Robert Aldrich exercise in grand guignol occasionally wades into campy waters, it remains a stylish, highly effective, and deliriously over-the-top chiller. Of course, most Bette Davis devotees prefer the ringlets, rats, and dead birds of 'Baby Jane,' but I find the rolling heads, hacked off hands, and decaying Southern "charm" of 'Sweet Charlotte' more appealing.

Make no mistake, I love watching a grotesque Davis warble 'I've Written a Letter to Daddy' in 'Baby Jane' and beat up on poor, paraplegic Joan Crawford (man, that rotten ol' Bette can kick!), but 'Hush...Hush, Sweet Charlotte' possesses a more finely textured plot (with terrific twists and turns), ritzier production values, and a stellar cast of Hollywood legends hamming it up to the hilt. Davis, Olivia de Havilland, Joseph Cotten, Agnes Moorehead, and Mary Astor (in her final film role) chew up the dialogue as if it were choice beef jerky, savoring every malicious put-down and thinly veiled insult. Yet beneath all the shameless histrionics lies the sad — dare I say touching? — story of delusional spinster Charlotte Hollis (Davis), who pitifully pines for her murdered lover while greedy, vindictive parasites prey upon her. Oh, she gets her revenge in the end, all right, but her ironic reward is most likely a well-padded cell in the local asylum.

After the success of 'Baby Jane' in 1962, director Aldrich sought a follow-up project to re-team dueling divas Davis and Crawford, and approached 'Baby Jane' author Henry Farrell to concoct another sadistic brew. Both stars jumped at the opportunity despite their mutual disregard, but Crawford quickly realized she couldn't compete with or temper Davis' megalomania. As location shooting commenced in Louisiana, the rivalry spiraled out of control — Bette excised large chunks of Joan's dialogue, denigrated Crawford's acting in front of the crew, and excluded the star from after-hours social gatherings. As a result, an exhausted and debilitated Crawford succumbed to pneumonia, retreated to a hospital, and shut down production for weeks. She finally returned, but after numerous "relapses," Aldrich became fed up with Joan's manipulations and, much to Bette's glee, began seeking a replacement. He approached Loretta Young, Barbara Stanwyck, and Vivien Leigh (who, according to author Shaun Considine, declined the part by saying, "I can just about stand looking at Joan Crawford's face at six o'clock in the morning, but not Bette Davis."), then finally convinced Davis' old pal Olivia de Havilland to take the role. When told she'd been sacked, Crawford supposedly cried for nine hours in her hospital bed, then told a reporter: "I'm glad for Olivia; she needs a good picture."

With Crawford gone, 'Charlotte' proceeded on schedule. Like 'Baby Jane,' a lengthy opening sequence, set in 1927, lays the groundwork for the horror and mayhem to come. (And only an egomaniac like the 56-year-old Davis would consider playing the young Charlotte herself. Thankfully, she's well concealed by shadows, and though a double is used in some scenes, the raspy voice is unmistakably Bette's.) Domineering patriarch Big Sam Hollis (Victor Buono) orders John Mayhew (Bruce Dern) to end his affair with Charlotte and return to his wife, Jewel. John reluctantly complies, dumping the distraught Charlotte in the secluded Hollis summer house during a wild plantation party. Her last words to him resonate: "I could kiiiiill you!" Minutes later, a cleaver-wielding maniac brutally butchers John, and when Charlotte returns to the soirée in a blood-stained white dress, everyone assumes she did the deed.

Flash forward to 1964. Charlotte, who escaped prosecution for the crime (thanks to her father's political connections), lives a reclusive life in the decaying family mansion with only her devoted housekeeper, Velma Cruthers (Moorehead), as a companion. She clings to John's memory (some even suspect she carries around his severed hand in an antique music box), and, at times, wanders her home calling his name. The townsfolk believe Charlotte is "crazy as a loon," and she often acts the part to spite them, especially when the state of Louisiana plans to evict her from Hollis House to make room for a new highway. Panic-stricken over losing her land, Charlotte musters some Scarlett O'Hara resolve and summons her worldly cousin, Miriam Deering (de Havilland), back to the homestead to help her fight the state bureaucracy. Dr. Drew Bayliss (Cotten), an old family friend and Miriam's former flame, lends his support as well.

Of course, with friends like these... No sooner does Miriam settle in than Charlotte takes a turn for the worse. She becomes unbalanced and deranged, and her repressed paranoia springs to the surface. Velma suspects Miriam (and Drew) might not have Charlotte's best interests at heart, but can't come up with any incriminating evidence. Meanwhile, a kindly British investigator (Cecil Kellaway) arrives in town and befriends the fragile Charlotte. He also interviews the fading Jewel Mayhew (Astor) in his attempt to solve the decades-old mystery of who killed John and why his life insurance policy remains unclaimed.

Although some story elements may suggest otherwise, 'Hush...Hush, Sweet Charlotte' is light years away from the schlocky William Castle shockers of the same period. A good bit of spirited hacking does transpire in the film's prologue (punctuated by laughable special "effects"), but 'Strait-Jacket' this most certainly ain't. Director Aldrich takes a more Hitchcockian approach, smoothly balancing suspense, soap opera, and poignancy, while injecting plenty of black comedy into the proceedings. The creepy atmosphere of the dilapidated Hollis mansion makes Charlotte's drug-induced hallucinations plausible, and the lively dialogue, intricate plotting, and magnetic performances keep our eyes glued to the screen.

Leading the charge is Davis, of course. (Would she have it any other way?) Though on the surface, Bette seems to play Charlotte as a raging harpy, a closer look yields a multitude of subtle shadings in her portrayal. Sure, it's fun to watch Davis shove two-ton cement flower pots off her balcony, strut through her living room with a loaded rifle, and scurry down a staircase on all fours yelping like a wounded animal, but beneath all the show-offy theatrics, she engenders genuine sympathy for Charlotte, and her quiet, pensive moments beautifully resonate.

De Havilland is excellent, too, in a tough, duplicitous role. Cousin Miriam harbors more secrets than Pandora's Box, but Olivia keeps the lid on tight throughout the film's first half. Like a middle-aged Melanie Wilkes, she laces all her dialogue with a sickly sweet sincerity (at times, when she says "Charlotte," it sounds exactly like "Scarlett"), but when Miriam at last brandishes her claws, the syrup turns to venom, and Olivia — who seldom played a bitch throughout her long career — seems to relish every nasty line. Yet de Havilland rarely overplays, and her restraint nicely complements Davis' more brazen portrayal.

Although 'Charlotte' boasts a gallery of oddballs, the most bizarre in the bunch (and everybody's favorite character) is the lovably slovenly, sharp-tongued Velma. To carry the 'Gone With the Wind' analogy a bit further, she's a cross between Mammy and Prissy, fiercely loyal to Charlotte, but disgusted by Miriam's pretension, and not afraid to say so. In a rollicking, riveting performance, Moorehead pulls out all the stops and shamelessly steals every scene in which she appears. Her muttering, mimicking, and mouthing off would earn her a well-deserved Best Supporting Actress Academy Award nomination, one of seven (!) the film would receive. (The others were for Best Black-and-White Cinematography, Best Black-and-White Art Direction/Set Decoration, Best Song, Best Original Score, Best Film Editing, and Best Black-and-White Costume Design.)

Not bad for a campy little chiller. 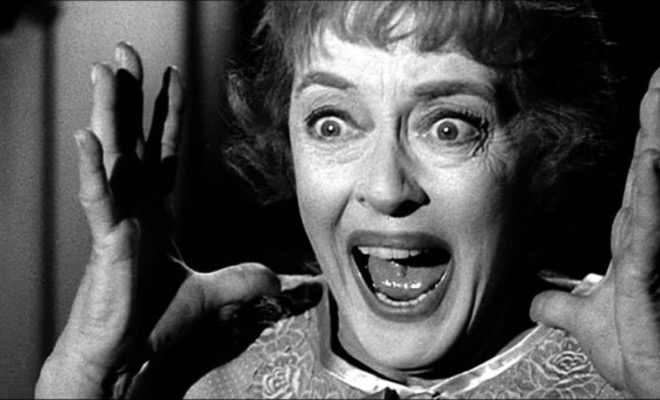 'Hush...Hush, Sweet Charlotte' arrives on Blu-ray in a limited to 3,000 edition packaged in a standard case. An eight-page booklet that features an essay by film historian Julie Kirgo, a few black-and-white scene shots, and a color reproduction of the movie's poster art is tucked inside the front cover. Video codec is 1080p/AVC MPEG-4 and audio is DTS-HD Master Audio 2.0 stereo. Once the disc is inserted into the player, the static menu without music immediately pops up; no previews or promos precede it.

'Hush...Hush, Sweet Charlotte' looks great on DVD, but it looks even better on Blu-ray. Exceptional clarity and contrast enhance details and depth, while light grain heightens the eerie mood and lends the image a warm film-like feel. Rich shadow delineation and marvelous gray scale variance draw welcome attention to Joseph F. Biroc's Oscar-nominated cinematography, which brilliantly juxtaposes lush, inky blacks and vibrant, well-defined whites. Although close-ups of the aging legends are far from flattering, the amazing level of detail highlights every facial line, crevice, and sag, and helps draw us into Charlotte's unbalanced world. Best of all, no nicks, marks, or scratches afflict the print, and any digital tinkering escapes notice. This classy presentation makes us look past the film's gruesome narrative and focus more intently on its superior production values and palpable artistry, elements often overlooked when examining this spooky thriller. Is an upgrade worth it? You bet!

Just like on the previous DVD releases of 'Hush...Hush, Sweet Charlotte,', both stereo and mono tracks are included, but they've been upgraded to crystal clear DTS-HD Master Audio. Both tracks benefit from excellent fidelity and a pleasing depth of tone, and both are free of any age-related imperfections, such as hiss, pops, and crackles. Atmosphere is such a key element in thrillers, and though the stereo track lacks any noticeable separation, it renders subtle details like ominously tinkling wind chimes, creaking doors, and the gentle rustling of a newspaper exceptionally well. Sonic accents such as bombastic thunder claps, shattering glass, and barking dogs are crisp and distinct, and ambient effects like chirping birds and crickets enhance the mood without overwhelming it. A wide dynamic scale handles all the highs and lows without a hint of distortion, all the choice dialogue is clear and easy to understand, and Frank DeVol's Oscar-nominated music, which underscores a multitude of conflicting emotions, fills the room with ease. You can't go wrong with either option, but the stereo track provides a slightly fuller aural experience that helps this chiller achieve maximum impact.

All the extras from the two previous DVD releases of 'Hush...Hush, Sweet Charlotte' have been combined and ported over to this Blu-ray edition, and a new audio commentary is also included. All tolled, it's a treasure trove of material that's well worth exploring.

More than a half century after its initial release, 'Charlotte' remains awfully sweet. An engrossing story (with a sustaining emotional thread), terrific performances from a powerhouse cast, and elegant trimmings raise this ghoulish thriller high above others in the faded diva genre. Bette Davis, Olivia De Havilland, Joseph Cotten, and Agnes Moorehead check their good Southern manners at the door and tear up the faded finery and each other over the course of two delicious hours. Twilight Time's Blu-ray presentation features top-notch video and audio and a wealth of absorbing supplements, all of which help 'Hush...Hush, Sweet Charlotte' earn an enthusiastic recommendation. Eat your heart out, Baby Jane.