Three female employees of a sexist, egotistical, lying, hypocritical bigot find a way to turn the tables on him.

"So I have a few faults; who doesn't? Is that any real reason to kill me?"

When you've grown up watching a particular movie, it's interesting to see how well - or how poorly - it ages. Perhaps the visual effects, fashions, editing style and story structure can date a picture. Even the film's political leanings can date a film in ways that can be detrimental to the enjoyment of multiple viewings. Then there are the classics. These are the films that have been poignant and hilarious from the day they were released and have stayed that way for decades. 1980's Colin Higgins film '9 to 5' starring Jane Fonda, Lily Tomlin, and Dolly Parton deftly satires the rampant sexism that can dominate the workplace.

Judy Bernly (Jane Fonda) is recently divorced housewife who must enter the workforce as a secretary at Consolidated Industries' to get by. On her first day, she is trained by the veteran Violet Newstead (Lily Timlin). Violet has been at the company a long time. A real long time. In fact, Violet trained their boss Frank Hart Jr. (Dabney Coleman). At first, Mr. Hart doesn't seem like such a bad guy, but then he starts talking. The more he talks the more reveals himself to be condescending misogynist who in actuality doesn't know a thing about his job and delegates all of his responsibilities to his "ladies." When he's not pretending to know what he's doing, Hart is trying to cozy up to his assistant Doralee Rhodes (Dolly Parton) - whether she wants him to or not.

After Judy catches hell from Hart for an honest mistake, Violet gets passed over for a promotion for a manager position by another inexperienced man, and Doralee learns about Hart spreading salacious rumors about her, the trio is united against a common enemy: Hart. That night, they have a rip-roaring great time getting drunk, smoking some primo Maui Wowee, and sharing all of the fantasies they have about emasculating, and in some cases, murdering Hart. In the haze of booze and marijuana from the night before, Violet comes the closest to taking the fantasy too far. When she accidentally adds rat poison to Hart's coffee instead of sweetener, she's convinced she killed him when he actually fell out of his broken chair and hit his head. When Hart learns about what happened and threatens to fire Judy, Violet, and Doralee and have them arrested, the three women must kidnap their boss long enough to uncover his dirty corporate double dealings. 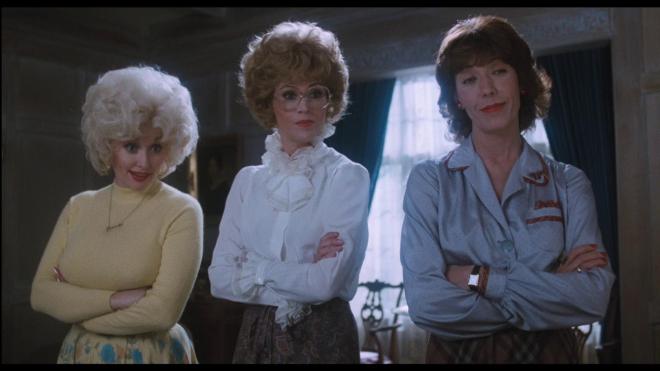 '9 to 5' is one of the many movies that I grew up with. It wasn't a movie that I thought of as political or something that takes a stance or had a firm message about the state of things; I just thought it was hilarious. It wasn't until I got older, got out into the world a little more that I actually started to get the satirical elements. Like any good satire, '9 to 5' works as a little mirror to society and points out some of the hypocrisies of day-to-day life. Normally one would hope that this little mirror would fade after awhile and serve more as a time capsule of sorts, but for better or worse, '9 to 5' is just as relevant today as it was in 1980. While things have gotten better and there are more women in prominent places in business and politics, there is still a long way to go towards full equality.

The good news for '9 to 5' is that it is still a hilarious comedy that holds up beautifully all these years later. While the ladies' fantasies about killing Hart may be a bit cartoonish and silly, those are the only real over the top moments found in the film. Some could argue Hart later being shackled to an automatic garage door opener and being forced to watch daytime soap operas from his bedroom as being over the top - but that's all part of the clever satire found throughout Patricia Resnick and Colin Higgins' screenplay. The comedy comes from relatable moments that everybody has had working at an office. Granted, the approach is from a distinctly feminine point of view, it is still relatable - and hilarious. That said, this movie wouldn't be anything without Jane Fonda, Lily Tomlin, and Dolly Parton. The chemistry these actresses share is fantastic, they feel like old friends and the hijinks they get themselves into wouldn't nearly have been funny if they didn't pull off that relationship.

'9 to 5' isn't one that I pull out of my collection very often. I save it for when the mood is right because '9 to 5' is the kind of comedy I don't want to ever get too tired of, but also one that I want to appreciate fully. I don't want distractions. I don't want to have it on in the background while I do other work. I want to sit back, put my feet up, and be entertained by three incredibly talented actresses - and one actor who made a hell of a career playing the festering office boss everybody loves to hate. If you've never given '9 to 5' a shot, it's long past time for you to give this comedic gem a spin.

'9 to 5' arrives on Blu-ray courtesy of Twilight Time. Pressed onto a Region Free BD50 disc, the disc is housed in a clear sturdy standard Blu-ray case. Included is a booklet containing stills from the film and an essay by Film Historian Julie Kirgo. The disc loads directly to a static image main menu

'9 to 5' arrives with what is best described as a representative 1.85:1 1080p transfer of its time. As with so many late 70s early 80s film with that persistent hazy softness, '9 to 5' is no exception. While on the softer edge of the spectrum with the telltale hot whites, the overall presentation is a notable improvement over previous home video releases. Film grain is visible and present without being too intrusive. Detail levels are sharp and appreciable allowing you to soak in all of the dusky orange 70s stylings of the Consolidated Industry's office. Facial features and hair styles are also on display. Colors have a bit of a shift to them in certain scenes, some of the office sequences can look a tad pale and soft while later moments of the film look fantastic. The "Dream Sequences" where the ladies fantasize about killing Hart each have their own stylings where colors are either dropped out to near black and white, softened to look like a classic western or popped to look like a Disney film - each with their own varying bits of saturation and grain intensity. Black levels are good, not amazing. There is a notable sense of depth to the image but blacks never quite reach that desired inky quality. the source print is in fantastic shape, only some slight speckling here and there, but otherwise, the print is clean.

'9 to 5' arrives with an English DTS-HD MA 1.0 mono as well as a DTS-HD MA 2.0 mix. In this case, I'm going to give the edge to the 2.0 track if only because there is a better sense of balance to the mix. It doesn't feel nearly as front-loaded as the mono track. That isn't to say the mono track is bad, it's actually very good. Both mixes have crystal clear dialogue with plenty of layering of the audio elements to give the mix a nice sense of atmosphere and dimension. Sound effects sound natural and busy keeping the office set pieces lively and effective while the score by Charles Fox and the signature Dolly Parton tunes round out the mix nicely. Both tracks handle the workload well enough and keep the poppy lively spirit of the film intact. In terms of experience, it's going to come down to personal preference. I enjoyed the stereo mix better, but the mono track sounds just as organic and impressive.

Audio Commentary: Film Historians Julie Kirgo and Nick Redman along with Screenwriter Patricia Resnick provide a solid commentary track that is actually a great companion piece to the vintage one supplied for the DVD.

Dolly Parton and Lily Tomlin Interviews: (SD 20:39) This is some extra interview material from the "Remembering Colin Higgins' extra feature. It's nice material and I'm glad they included.

Deleted Scenes: (HD 22:51) this is an impressive collection of deleted scenes and alternate takes. Some funny stuff in here that obviously had to get cut for time, but it's also cool to see how many times they had to perform a particular gag in order to get it right.

Gag Reel: (SD 11:37) While in rough shape, this bonus feature ported over from the previous DVD is actually pretty and don't feel as staged as this sort of bonus feature does today.

'9 to 5' is a comedy classic, plain and simple. It's hilarious, features amazing performances from its central cast and its satire is just as sharp as it was 36 years ago. '9 to 5' makes an excellent transition to Blu-ray thanks to Twilight Time. With a solid A/V presentation as well as a host of new and vintage bonus features, this disc offers up hours of fun and hilarity. Fans should absolutely consider a purchase, for newcomers, I dare you to take the plunge and give this great movie a try. Highly Recommended.