Eye of the Needle

A ruthless German spy, trying to get out of Britain with vital information about D-Day, must spend time with a young woman and her crippled husband.

World War II certainly provided fertile soil for generations of motion pictures. The number of films that took place during the heat of an infamous battle or even tangentially to the war is probably uncountable. From pure adrenalin-pumping action films to thoughtful pondering human dramas to out and out screwball comedies, just about every genre has taken a stab at telling a WWII story. The spy genre is certainly no exception as numerous films about a secret mission's success and the outcome of the war were made. While most of these films took the traditional route of focusing on the Allies as the heroes, very few took the alternate path with a Nazi as both the hero and villain. One of these few is the slick and chilling 1981 film 'Eye of the Needle.' Directed by Richard Marquand and based on the best-selling novel by Ken Follett, Donald Sutherland plays a cold and calculating Nazi spy who seduces a lonely housewife.

The Nazi's have taken France and hold all of Europe in their clutches. Hitler and his generals eye a complete victory as the English Channel is the only thing standing in their way of a complete invasion of Britain. With Allied forces entrenched and planning their own invasion to liberate Europe, the Nazis need their best spy to report troop movements and verify enemy positions. The Needle (Donald Sutherland) is the only man capable of pulling off such a sensitive task. With his position compromised and crack detective Godliman (Ian Bannen) hunting him down, The Needle will have to work quickly. When he discovers the truth of the Allied invasion plans of France, The Needle has only one chance to reach a U-Boat. Before he can reach his escape, he must outwit a lonely housewife named Lucy (Kate Nelligan) on a secluded island that has only one working radio.

I was first introduced to 'Eye of the Needle' on a transatlantic flight from London to Detroit when I was in high school. By that point in the trip, I'd long run out of reading material and was desperate for a good book. By chance I picked up a copy of Ken Follett's novel 'Eye of the Needle' knowing nothing about it; the cover artwork looked intriguing enough for me to read the synapsis. Since it only cost a few bucks, I figured it was worth the shot as there was nothing else that caught my eye at the little airport book store. It wasn't long after my plane reached cruising altitude that I became instantly hooked. In fact, I don't actually recall takeoff which is usually a very terrifying time for me personally. I was engrossed throughout the entire nine hour flight. I ignored the two films the flight provided. I missed a few drink services and I very nearly missed dinner. I simply couldn't put the book down. By the time I landed in Detroit, I was already two-thirds the way through with a scant few chapters left. By the time I finished the book, I was absolutely thrilled to learn there was a movie adaptation and I could easily rent it from my local video store! 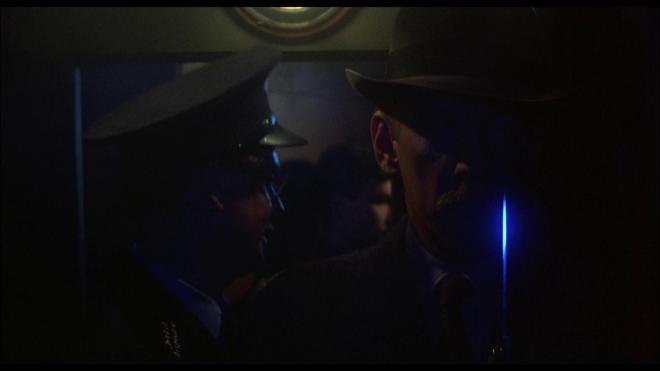 At first, I was a little put off by Richard Marguand's adaptation. Donald Sutherland was a perfect choice for The Needle as I had envisioned him to be a sort of everyman, someone who could easily blend into a crowd, but the pace of the film felt too quick. Important plot points and character introductions felt rushed through and certain aspects of the novel that I loved the most never felt like they fully came to light. However, by the time the final act started and The Needle meets the lonely Lucy and her small son and disabled husband, the film redeemed itself. As the years passed and I reexamined this little thriller a few more times, my appreciation of it grew. I was okay that Ian Bannen's Detective Godliman was somewhat short changed because the film absolutely nails what was most important - the relationship between Lucy and The Needle.

True to the book, you never quite know how The Needle actually feels towards Lucy. Is she truly the beauty that captured the heart of the beast? Or was she a means to an end and implementing her death an unnecessary luxury when his goal was to reach the submarine? It's a fun and twisted aspect of the book and the film that I've always enjoyed. As chilling and creepy as Sutherland is as The Needle, Kate Nelligan as Lucy is the real showstopper. She plays an innocent woman who essentially holds the outcome of the war in her hands. For fear of her own life and her child's she must play a dangerous game of seduction and hope that the man she's come to care for hasn't figured out she knows his true identity. I am still a bit let down that the cat and mouse game between The Needle and Detective Godliman wasn't more fully fleshed out in the film, but I understand why it was cut. In order to fully achieve that aspect of the story beyond the fleeting glimpses we're given would have required a significantly longer runtime than the 112 minute provided.

Because of certain plot points and one incredible jump-inducing scene, I don't often pull out 'Eye of the Needle.' It's one I like to save for when I'm in just the right mood. There are certain sequences and moments that I never want to get tired of feeling the building suspense and the shocking release that follows. 'Eye of the Needle' is a rock solid thriller that doubles as an intricate period drama. Director Richard Marquand and his screenwriter Stanley Mann do a fantastic job at capturing the essence of the book while the great actors bring the characters to life. If you've never seen the film, I do recommend you read the book, but it isn't altogether necessary. This adaptation of 'Eye of the Needle' is the perfect little thriller for a dark and stormy night.

'Eye of the Needle' arrives on Blu-ray courtesy of Twilight Time. Pressed onto a Region Free BD50 disc, the disc is housed in a sturdy clear Blu-ray case. Included is a booklet featuring stills from the film and en essay from Film Historian Julie Kirgo. The disc opens directly to a static image main menu with traditional navigation options.

I'm pleased to report that the 1.85:1 1080p transfer supplied for this release of 'Eye of the Needle' is the best the film has ever looked on home video. That said, many of the baked-in faults ranging from boosted contrast levels with blown out whites in some scenes - the worst appearing during the opening credits - and some softness issues remain, but they're far more balanced than the previous DVD release and are certainly leaps and bounds above my Laserdisc. I honestly wasn't expecting much from this transfer as the film has always looked a little soft and soupy as a characteristic of the timer period setting. Thankfully, film grain has been retained and allows from some very impressive detail levels throughout. Even when the film is at its worst, details still manage to shine through. Black levels are stable throughout offering up plenty of image depth. The print sourced for this transfer was in relatively good shape with only some very mild speckling.

The English DTS-HD MA 1.0 mono track supplied for this release of 'Eye of the Needle' is a solid piece of work. There is some nicely discernible layering to the audio elements that make many scenes feel full and lifelike. Dialogue is clean and clear throughout, although there are some notable sequences were voices were obviously looped in post-production as they never quite match the lips. Thankfully these moments aren't deal breakers by any means. The source mix is in great shape with only some very slight hiss barely audible. This isn't really even a gripe as that little bit of extra air gives many scenes a little extra ambiance. The bombastic Miklos Rozsa score sounds amazing as ever and really helps fill the scenes. All around this is a very good audio mix and serves the nature of this film perfectly.

Audio Commentary: Film Historians Julie Kirgo, Nick Redman with Music Historian Jon Burlingame provide a great little commentary track for this film. While their bits of information are anecdotal, they do provide a lot of relevant information about the film as well as a lot of moments dedicated to composer Miklos Rozsa.

If you love your World War II thrillers with some meat on their bones, some amazing performances, and a genuine sense of dread and suspense - 'Eye of the Needle' is a worthwhile watch. While it doesn't quite measure up to its source novel, what it does right it does extremely well. Twilight Time brings 'Eye of the Needle' to Blu-ray with a solid video transfer and audio mix, as well as a nice little commentary track and an excellent isolated score track. Fans of the film should be very happy with this release, newcomers I would encourage reading the book - however, if you gotta watch it now, you should be very entertained by 'Eye of the Needle.' Recommended.