Raiders!: The Story of the Greatest Fan Film Ever Made

The true, decades-spanning tale of the greatest fan film ever made. After Steven Spielberg's classic Raiders of the Lost Ark was released 35 years ago, three 11-year-old boys from Mississippi set out on what would become a 7-year-long labor of love and tribute to their favorite film: a faithful, shot-for-shot adaptation of the action adventure film. They finished every scene...except one; the film's explosive airplane set piece. Over two decades later, the trio reunited with the original cast members from their childhood in order to complete their masterpiece. Featuring interviews with John Rhys Davies, Eli Roth and more, Raiders! is the story of the project's culmination, chronicling the friends' dedication to their artistic vision--mixed in with some movie magic--to create the greatest fan film ever made.

In the summer of 1982, three middle-school boys joined forces to do a shot-for-shot remake of their favorite movie, Steven Spielberg's 'Raiders of the Lost Ark.' They all saw the movie separately the year prior, and the three boys weren't friends yet, but their love of the now dearly beloved action adventure classic is what ultimately brought them together, along with a passion to celebrate its impact on their lives. What they didn't anticipate was the amount time, work, and planning that goes into a big budget studio movie, turning what was initially meant as a summer project into an 7-year journey where each summer, holiday break and weekly allowance was dedicated to accomplishing this amatuer production. And like a real production, the kids shot scenes out of sequence over the course of those years, so they appear at different ages throughout the finished product, making it all the more humorous while attesting to their dedication. The end result, however, is a faithful adaptation of the Spielberg-Lucas collaboration that's as shockingly entertaining as the very film it celebrates and imitates.

Aside from its amatuer failings and laughably limited resources — much of it was shot in one of the kid's mother's basement, in their backyards and throughout their hometown of Ocean Springs, Mississippi — the one arguable drawback is that the kids didn't finish their version of their favorite movie of all time. Due to expense and the obvious dangers, they never shot one final sequence, the one with Jones in a fistfight while a Nazi plane rolls in circles. 'Raiders!: The Story of the Greatest Fan Film Ever Made' is the story not only about the making of that movie, but also about them reuniting after 25 years to finally make their dreams come true after a Kickstarter campaign raised the necessary funds for completing the missing scene. The folks behind the documentary, Jeremy Coon and Tim Skousen, are budding filmmakers themselves, so they treat their subject matter with a kind of admiration and a recognizable sense of understanding. This 106-minute look at a shoestring passion project is not meant for audiences to point and laugh at or be witness to the failure of these now grown men. 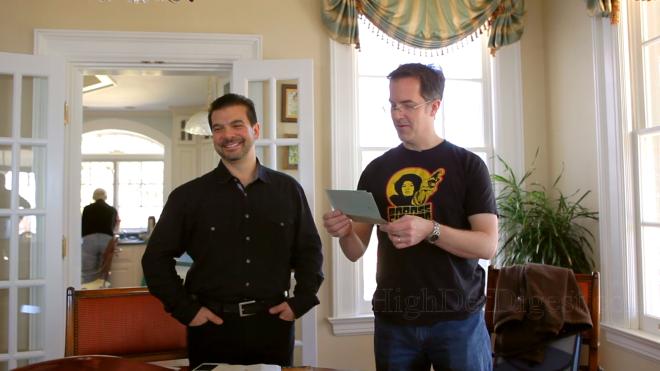 Rather, this is a making-of documentary that holds in awe the men's level of dedication and their unabashed adoration of cinema. It's an inspiring and surprisingly touching look at how movies affect our lives, capturing our imagination in such a way as to become a big part of our childhood while also serving as a source of escapism. Eric Zala is the movie's storyboard artist and director, igniting in him to pursue a career in the entertainment industry. And making this movie helped him through his parent's divorce, which sadly seems like a common theme for many of the boys involved. Serving as cinematographer, editor and special effects artist, Jayson Lamb is the most eccentric personality of the bunch, and the production allowed him to explore his imagination and quirky creativity — the only person with the right idea for turning the final airplane sequence a reality without the danger. Arguably, the most obsessed with the original 'Raiders' is Chris Strompolos, who played Indy in the adaptation. He's an enthusiastic and humbly upbeat guy with the most tragically moving backstory of all, which I won't spoil here. But he provides the emotional core of the documentary and serves as its recurring central theme.

As movie lovers, we express that love of cinema in a variety of ways, from the casual viewer with a small cluster of features deemed important favorites to the ardently devoted collector of memorabilia and an imposing collection of films on various home video formats. Some pursue impassioned careers in the industry while others are content with simply talking and writing cinema, like yours truly. And so, while we all fall somewhere within those ranges, the one thing uniting us is that love and when thinking on our childhoods, no matter how varied and different, certain movies have latched themselves to many of those memories. 'Raiders!' perfectly captures that love affair in a way that few documentaries have done before, by following a group of people who don't feel as though they missed out on their childhood. Instead, they filmed it. Their passion speaks to the film geeks and cinephiles in all of us, which is proven by the faithful adaptation being accidentally discovered decades later by Eli Roth and shown at Harry Knowles' Butt-Numb-a-Thon film festival where it was met with cheering applause by like-minded folks. It's a story as equally interesting and inspiring as the making of the greatest fan film ever made.

Drafthouse Films brings 'Raiders!: The Story of the Greatest Fan Film Ever Made' to Blu-ray as a two-disc combo pack with a code for a digital copy and a 16-page booklet with reprints of the original storyboard artwork. The Region Free, BD50 disc sits comfortably atop a DVD9 copy on the same panel, and both are housed in a clear keepcase with reversible cover art. At startup, viewers are taken straight to a menu screen with full-motion clips and music playing in the background.

The would-be filmmakers raid Blu-ray with a great-looking 1080p/AVC MPEG-4 encode although the documentary is largely made of stock footage of the period, behind-the-scenes footage from the production and badly aged VHS video of the movie. Other sources include clips of classic movies such as the original 'Raiders' and a collection of personal photos, but the film proper and the series of interviews look best and serve as reminders that viewers are in fact watching in HD. As would be expected, the footage presents a variety of compression artifacts and video anomalies, so properly gauging the overall quality is somewhat of a challenge.

All things considered, however, and with consideration to the majority of the material, I'm pleased to report the doc actually looks great with much to enjoy. Presented in its original 1.78:1 aspect ratio, the presentation displays a crisp and well-balanced contrast. Clean, bright whites fill the frame while the screen shows a variety of sharp details in the photography. Fine lines and objects are fairly distinct and nicely defined, depending on the quality of the film, but understandably, the older footage is softer with lots of visible damage, ranging from macroblocking and rainbow artifacting to aliasing and compression issues. The same goes for the colors seen throughout where sometimes they appear faded and worn while at other times, primaries are bold and accurately rendered. Strong black levels are the most consistent aspect of the documentary with good delineation in the darker portions. All in all, the presentation comes with much to enjoy and easily forgiven for the quality of older footage.

Accompanying the revelry and hardcore movie fanaticism is this surprisingly good and engaging DTS-HD Master Audio soundtrack. It won't likely have viewers cheering in their seats or will ever be nominated for demoing one's sound system, but it's enjoyable and complements the documentary well.

Although the track is unsurprisingly of the front-heavy variety, meant to focus audience attention on the interviews and the personal lives of the participants, a few effects sneak into the rear speakers with good directionality and panning. The most impressive moments are the behind-the scenes footage of the exploding airplane sequence being interrupted by thunder showers. The crackling roar of thunder resonates into the sides and overhead with the upmixing function of the receiver turned on while falling rain comes sprinkling all around. The musical score does the majority of the work, spreading across the screen with superb clarity and lightly bleeding into the surrounds to create a satisfying soundfield. Displaying excellent balance between the channels in the fronts, imaging feels expansive with detailed definition in the mid-range and well-prioritized vocals in the center. Low bass doesn't leave much of an impression, but it's hearty and impactful when used during certain scenes and for the music. Otherwise, this lossless mix is in great shape for a documentary about going big with childhood dreams.

'Raiders!: The Story of the Greatest Fan Film Ever Made' tells the story of a childhood dream of three passionate movie lovers that spanned over seven summers but still took 30 years to finally complete. The documentary by Tim Skousen and Jeremy Coon captures the love of cinema we all share in a way few films ever can and speaks to the hearts of film geeks and cinephiles everywhere. And it shouldn't be missed. The Blu-ray arrives with a great-looking video but some consideration should be given to the quality and condition of some of the more badly-aged footage. The audio presentation is equally strong with a couple impressive moments and a good selection of supplements, making the overall package is recommended for film lovers.

Sale Price 19.99
List Price 29.95
Buy Now
3rd Party 19.98
In Stock.
See what people are saying about this story or others
See Comments in Forum
Previous Next
Pre-Orders
Tomorrow's latest releases