Kevin Costner stars in this story of the right man in the wrong body. In a last-ditch effort to stop a diabolical plot, a dead CIA operative’s memories, secrets, and skills are implanted into an unpredictable and dangerous death-row inmate in the hopes that he will complete the operative’s mission.

'Criminal,' the latest action thriller from Ariel Vromen, Israeli-born director of 2012's excellent biopic 'The Iceman,' pulls the rug from under the audience in its opening moments with a monster MacGuffin in the vein of Alfred Hitchcock's seminal horror classic 'Psycho.' A frantic and desperate-looking Ryan Reynolds appears on screen covertly snagging a black bag with millions of dollars and a passport. But apparently, he's not as sly and cunning as he thought himself to be and is quickly surrounded by dogged agents who conveniently possess the technological know-how to hack GPS directions and be pretty much everywhere in London within a matter of seconds. (Siri will hand over your whereabouts for the right price!) Feeling like a tip of the hat to Hitchcock, Reynolds plays a less attractive and beguiling version of the Janet Leigh role, pulling us into the mystery of the money bag and the reasons behind a foot chase that suddenly erupts into a decently rousing shootout. The entire sequence suggests a spy thriller where Reynolds might play a major role, but as the Leigh trope, his death at the hands of anarchist-terrorist Xavier Heimdahl (Jordi Mollà) only sets up the real plot in which the 'Deadpool' star is erased from memory.

Wobbly intimations of Hitchcock's influence continue as the bag full of cash literally becomes a MacGuffin, a plot device triggering all the events that follow and prompting our hero to the film's true central theme. The script by Douglas Cook and David Weisberg, the same tag-team that wrote Michael Bay's 'The Rock,' features a series of laughably loony ideas, starting with the money meant as payoff to a hacker (Michael Pitt) who created a wormhole program that bypasses the world's nuclear defense codes. With Reynolds gone and the stakes this high, a sorely agitated and ranting Gary Oldman shows up as a CIA supervisor wildly raging to capture and pay the hacker for the program. Desperate to ground the story with some semblance of reality, the threat grows even more convoluted when the grizzled worrywart supervisor contracts Dr. Mahal Franks (a noticeably exhausted and bored Tommy Lee Jones) to perform an experimental procedure that would transfer Reynolds's memories to another person. Jones's quieter, more restrained performance is a counterbalance to Oldman's frenzied hollerings, and the both combined are a distraction from a cartoonish premise that would make a hilarious SNL skit. 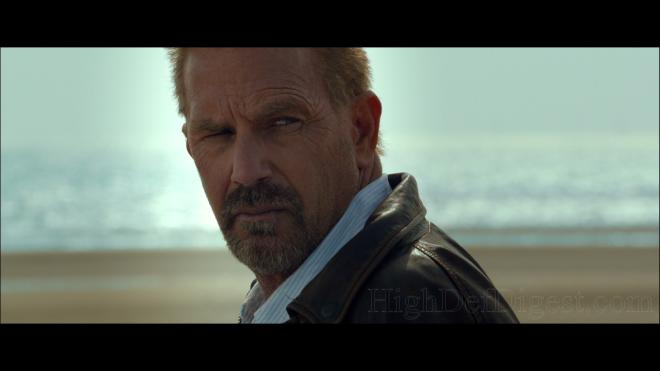 And as if the concept weren't enough for sketch-comedy material already, the filmmakers believe an even more disheveled, grumpy and significantly older Kevin Costner makes the perfect candidate for bearing Reynolds's secrets. Granted, the award-winning actor is arguably more experienced and fitting for this type of movie, but he's also 21 years Reynold's senior and not nearly as fit. In reality, this is the equivalent of seeing Hugh Jackman on Saturday Night Live as a super secret agent transformed into a bumbling, klutzy Bobby Moynihan — though I think Chris Farley would ideally make it hysterical. But Jones's unappreciated doctor swats away naysayers with some medical mumbo jumbo about underdeveloped frontal lobes and proclaims the most suitable candidate is Costner's emotionally callow, recklessly impulsive inmate Jericho Stewart, who apparently wears a locked collar chained to the ceiling of his windowless cell. All things considered, Costner does remarkably well in the role of a dangerous convict entrusted with locating the bag of cash, a hacker and saving the nation from nuclear annihilation.

Amazingly, as silly as the premise sounds, the filmmakers manage to pull if off with enjoyable effectiveness and should be applauded for at least making the cartoonish notion reasonably entertaining. As though taking further inspiration from Hitchcock's classic spy features, the story switches gears from an action spy thriller to an espionage drama when Jericho begins grappling with emotions and attributes he never knew he possessed. Watching Costner convincingly grow from remorselessly cruel and bullying, taking freely from restaurants while smiling or yelling expletives to a young woman at a pharmacy counter, is a large part of the production's success. And all thanks to an unwilling donor who was not only a government agent but a loving father and doting husband to Gal Gadot, another emotional element for nudging Jericho's journey from homicidal indifference to compassionate human. It's also essential for accomplishing a rather mawkish conclusion that's sadly undermined by a goofy, eye-rolling twist. When it comes down to it in a by-the-numbers, predictable production, it's at least a welcomed throwaway where the action is in the service of the story and not the other way around.

Summit Home Entertainment brings 'Criminal' to Blu-ray as a two-disc combo pack with a flyer for an UltraViolet Digital Copy. The Region A locked, BD50 disc sits comfortably opposite a DVD-9 inside a blue, eco-cutout case and a glossy slipcover. After several skippable trailers, viewers are taken to an animated menu screen with full-motion clips and music playing in the background.

'Criminal' makes a run for it on Blu-ray with a fantastic, near-reference 1080p/AVC MPEG-4 encode that remains true to the heavily stylized photography of Dana Gonzales, which terrifically complements the film's tone and theme. Mostly shot on the Arri Alexa XT camera with some action sequences shot on the Red Epic Dragon system, the digital photography comes with a deliberately subdued tone for a drearily somber and overcast atmosphere. But the freshly-minted transfer nonetheless enjoys a well-balanced contrast and brightness levels, showing intensely bright and crisp whites throughout, from the clothing of the cast to the clouds in the sky.

Blacks are slightly affected by the stylized approach, but overall, shadows allow for great visibility during the darkest moments while providing the image with appreciable depth. Colors are not the brightest, which again, is likely due to the cinematography, but the results are nonetheless excellent with accurate, full-bodied primaries and cleanly rendered secondary hues that provide warmth and natural flesh tones.

Presented in a 2.40:1 aspect ratio, the freshly-minted transfer is a clear winner in terms of definition and clarity, showing distinct, resolute fine lines for a good chunk of the runtime. Though some scenes look a bit softer than others, most of the presentation is highly detailed, exposing every wrinkle and blemish in the faces during close-ups. Facial complexions look great and lifelike, particularly Kevin Costner and Tommy Lee Jones, who look very aged and wrinkled compared the flawless Gal Gadot. Individual bricks on buildings and the tiniest stain and flaw on various buildings throughout London are crystal-clear. All in all, Jericho-Bill makes his grand escape to Blu-ray with an outstanding high-def presentation.

The sci-fi spy drama takes aim and hunts down his target with a thoroughly enjoyable DTS-HD Master Audio soundtrack. From the opening moments, the design generates a terrifically enveloping soundscape, furnishing the surrounds with a variety of noises and activities. The sounds of bustling London streets and traffic spread everywhere with discrete clarity, and an unexpected shootout bursts forth with resounding enthusiasm, as every bullet fired convincingly echoes all around. Other action sequences arrive with similar results as the tiny thumps and clatter of debris land in every corner the room, creating several amusingly satisfying moments of immersion. Quieter, more intimate conversations, unfortunately, rapidly redirect the attention to the center of the screen, which is not a bad thing considering the plot's dramatic elements. However, the sudden lack of activity in the rears is very apparent, making the shortage of even the subtlest atmospherics in the background just a tad distracting. On the other hand, a majority of the lossless mix is satisfying with excellent directionality.

The excitement and thrills continue in the fronts, delivering an amazingly spacious and incredibly expansive soundstage with noteworthy channel balance. Whether it's cars, helicopters or bullets, the action moves and pans from one side to the other with fluid precision and fidelity, creating a terrifically engaging wall of sound that's littered with a variety of convincing off-screen activity. Even during the loudest segments, the design remains distinct and dynamic with room-penetrating clarity, exhibiting outstanding detailing between the mids and highs without the slightest hint of distortion. The music of Brian Tyler and Keith Power benefits with striking separation in the orchestration while also extending into the rears for welcomed moments of envelopment. The low-end is powerful and robust, energizing the room with a palpable punch and weight in every bullet fired, the deafening explosions and the electro-infused score (bass chart). Dialogue is precise with excellent intonation in the various voices, making this an exceptional lossless mix for an otherwise average actioner.

'Criminal' is the latest action sci-fi thriller from director Ariel Vromen that relies heavily on a few MacGuffins and a premise that's frankly silly. But in spite of that, the production manages to pull it off with an engaging dramatic center that grounds the silliness from collapsing into itself and featuring well-rounded performances by a cast that engages viewers. The Blu-ray arrives with an excellent audio and video presentation and decent collection of supplements. The overall package is worth a look for action junkies wanting something to kill a couple hours on a Sunday afternoon.