Gun The Man Down

Wounded and left behind by his scheming partners (Robert Wilke, High Noon; Don Megowan, Blazing Saddles) during a bank robbery, Rem Anderson (James Arness, TV’s Gunsmoke) is captured and sent to prison. Following his year-long sentence, Rem is on the hunt for the men who made off with his share of the loot as well as his girlfriend Janice (Angie Dickinson, Rio Bravo).

Tracking down those who did him wrong in a methodical game of cat-and-mouse, Rem’s plan for revenge is one best served cold and slow in the western drama Gun the Man Down.

Nothing like a little bank robbery gone wrong to motivate some old fashioned western revenge. Some may argue revenge is a dish best served cold, while others make the equal argument that a fully loaded six-shooter offers up the best serving of death. As perhaps the most frequent theme of westerns since the very beginning of the cinematic genre, revenge is the driving motivator for James Arness in 1956's 'Gun The Man Down.' It's a simple movie without much character depth, but one man's drive for vengeance is more than enough to keep this little western moving and exciting.

It was a perfectly planned operation. Go in, get the newly arrived payroll from the bank vault, and then head for the hills and wait for everything to blow over. But when Rem Anderson (James Arness) is wounded by a bank guard, his partners Rankin (Robert J. Wilke) and Farley (Don Megowan) kill the guard and make off with the loot. With Rem wounded and bleeding, the pair took off for their own rallying point across the state lines letting the posse of lawmen to catch Rem as a diversion. But they don't just take off with the loot, they force Rem's girl Janice (Angie Dickinson) to go with them.

When the law finally catches up with Rem, even when his comrades betrayed him, the man stays silent earning him a one-year prison sentence. Once that year of hard labor is up, Rem sets out to take back what's his and bring death to the men who betrayed him. What he doesn't expect is the wise warnings from territory lawman Sheriff Morton (Emile Meyer). With hate in his heart, Rem must confront his enemies and decide what kind of man he wants to be. Does he get revenge and risk his own death at the hands of the local law? Or does he forgive and move on with his life even if that means letting the men who betrayed him keep breathing? 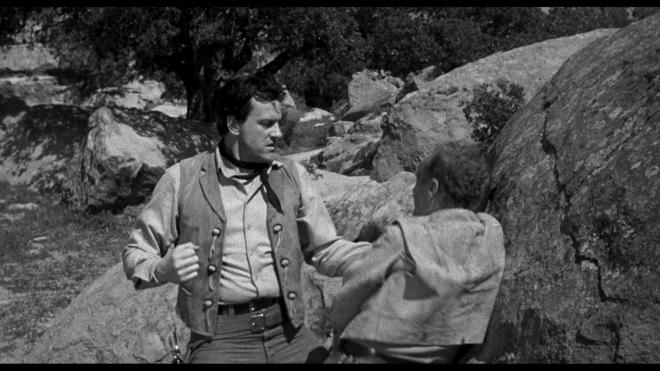 At a swift 76 minutes, 'Gun The Man Down' wastes little time getting down and dirty with its little story. We're quickly introduced to Rem, his thieving partners, and his girl Janice. We know right away that Rem is deep down an honest man who has decided to take the easy way to big riches so he can get a ranch of his own. We see right away that Janice is not okay with this plan but is powerless to keep Rem from doing what he thinks is right. It's a great setup and sets the stage for the rest of the film. While we don't get to see the heist go wrong, we don't really need to once Rem returns to the gang's hideout wounded. As the men leave him behind and he watches Janice ride off with Rankin and Farley, the audience is fully on board with this man's quest for revenge and fully understand why he would rather go to jail than to let the law catch up to them.

At its core, the cast is what really makes this little western tick. While everyone is playing to a basic story archetype, the simplistic story allows for the actors to have a little fun and show their range. James Arness delivers a solid performance as a man consumed with hate. There's not much more for him to do other than to grimace and look threatening. When it counts most, he manages to give the thin character some dimension with his inner turmoil over what to do about his partners. Wilke and Megowan are basic fearful bad guys. They know a bullet has their name on it and they play those roles well enough. Emile Meyer is great as Sheriff Morton and gives Arness his conscience. That said, the real stand out is Angie Dickinson. While the credits list her as "Introducing," this wasn't exactly her first cinematic rodeo - but it's easy to see how it put her on the map. She brings the same sassy spitfire energy that would be put to good use later on in films like Howard Hawke's 'Rio Bravo.'

'Gun The Man Down' certainly isn't the greatest western ever made, or even during the 1950s for that matter. Like so many other westerns of that era, it was merely filling a void in movie theater schedules helping them to sell more popcorn and entertain an audience. To that end, 'Gun The Man Down' succeeds. If you're going into the film strictly for entertainment purposes, you should leave the show happy. If you're expecting some grandiose genre-defining experience enleague with films like 'The Searchers' or 'High Noon,' you're simply setting yourself up for disappointment. 'Gun The Man Down' works best as a piece of distracting entertainment and not necessarily as a movie with a moral message.

'Gun The Man Down' arrives on Blu-ray courtesy of Olive Films. Pressed onto a Region A BD25 disc, the disc is housed in a standard Blu-ray case. The disc opens to a static image main menu with traditional navigation options.

With a 1080p 1.85:1 image transfer, 'Gun The Man Down' looks pretty good - not amazing mind you - but pretty darn good for a film of this vintage. Fine film grain is apparent throughout, but is stable and only ever appears noisy during optical transitions. The film's grey scale and black levels are also very good allowing for rich and inky blacks with good shadow separation providing the image a sense of depth and dimension. Where the image falters a little is some notable flicker, especially during darker scenes. It's not terrible enough to knock the score on its own, but there are a couple of these dark scenes where jitter is also apparent and the combined faults can be a bit distracting. Thankfully the print sourced for this transfer is in relatively decent shape without any serious or notable defects, some slight speckling and a scratch here and there. All around this is a very good looking image, especially for a deep catalogue title.

'Gun The Man Down' comes with a solid if unremarkable English DTS-HD 2.0 mono track. Dialogue is clean and clearly heard throughout. Sound effects and ambients provide a slight sense of space while the effective score by Henry Vars sets the mood well. That said, the film itself is a pretty routine and basic affair for a low budget western. Not very many big sets were used, few extras ever make an appearance, so the film is mostly small locations with a couple of actors or shot up in the hills with a couple of horses. The mix itself isn't too interesting, but that's not really a fault of this track as it accurately represents the film. The only issue is some very mild hiss that can come in during very quiet scenes, but otherwise, the track is free of any breaks, pops, dropouts or any other age-related anomaly.

If westerns are your bread and butter, 'Gun The Man Down' may not be a four-square feast, but it provides a nice little film to snack on. James Arness shows he's got the tough stuff to play a believable man consumed by revenge while Angie Dickinson delivers an energetic performance that is surely responsible for her later career successes. Olive Films brings 'Gun The Man Down' to Blu-ray with a respectful A/V presentation that does right by this little low budget western without any extra features. I enjoyed the movie enough to call this Blu-ray release worth a look.

Sale Price 16.82
List Price 29.95
Buy Now
3rd Party 14.95
In Stock.
See what people are saying about this story or others
See Comments in Forum
Previous Next
Pre-Orders
Tomorrow's latest releases