"Be sure the story is something you cannot resist," Richard Rodgers once advised Meredith Willson. After considering 100 projects for a successor to The Music Man, Willson found one that was irresistible. And unsinkable.

Debbie Reynolds plays the title role, inviting all to Belly Up to the Bar, Boys for the whoop-and-holler film of Willson's 1960 Broadway hit. Reynolds won a 1964 Best Actress Oscar nomination as the backwoods heroine who survives the Titanic and the snobbery of Denver society. Screen-debuting Harve Presnell reprises his stage role of Johnny, who has heartful-and-a-half of love for Molly. Johnny wasn't alone. Astronauts Gus Grissom and John Young so admired the movie they named their Gemini 3 spacecraft Molly Brown.

Facts and legit history have a funny way of toying with entertainment. Inaccuracies are almost always expected in a biopic - especially if it works thematically and helps move a story along. Even with that caveat, it can be difficult to take in a film that establishes itself as a true story and yet virtually all of the events depicted are fanciful creations. It's even more difficult when the film is a musical that stalls out any narrative thrust in favor of catchy and oftentimes irritating show tunes. This is the unfortunate case of 1964's 'The Unsinkable Molly Brown' featuring an Oscar-nominated turn from Debbie Reynolds. Good intentions and decent performances, unfortunately, aren't enough to keep this film afloat for long.

Molly (Debbie Reynolds) is a rough and tumble backwoods young lady with pie in the sky dreams of getting out of her small life and living big. It could be argued that her adventurous life was instilled in her at a young age. When she was but a newborn, she was rescued from the raging Colorado River by Irish pioneer Shamus (Ed Begley) and raised alongside his sons. As a unschooled, untamed, uncultured young woman, Molly wishes she had a husband - someone who could spirit her away from the simple life she's lived. But where is a woman like Molly going to find a man who can usher her into society? That man turns out to be mine owner "Leadville" Johnny Brown (Harve Presnell). As the couple quickly falls in love, Molly finds the man of her dreams with wealth and power in abundance. Now all Molly has to do is establish herself in high society where most people would look at her as "new money" and shun an upstart like her. As she travels to Europe to find herself, leaving her husband behind, Molly quickly realizes her love for Johnny is too strong and must return home on the biggest ocean ship ever built, the RMS Titanic.

When you have a successful broadway musical that is bringing in the bucks hand over fist, it's a sure bet that a movie adaptation isn't too far behind. While this pattern usually reaps big box office rewards, it doesn't always equate a satisfying cinematic experience. Sadly, 'The Unsinkable Molly Brown' falls into this particular bear trap. What works as a fun and rollicking stage show turns into a buffoon of a cartoon film. Even filming in the lush and beautiful Colorado Valley fails to make this musical feel genuine. The comedic elements fall flat, the songs are unmemorable, and the stilted history keeps the film at an arms distance. 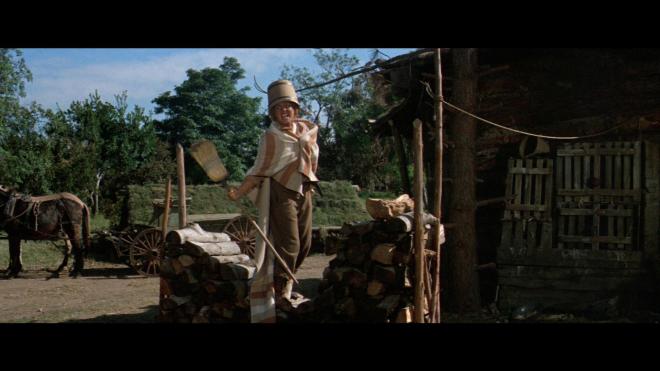 It doesn't help matters that the film and the stage show that it's based on decided to change the name of the main character. Molly Brown is actually Margaret Brown in real life. Her life was a tough one and hardly the rollicking romantic romp depicted in the film. While Debbie Reynolds gives her "Molly" everything she's got, but a film can only be carried so far on the energy of its lead actress. All credit must be given to Reynolds co-star Harve Presnell for soldiering on with the character he established during the original Broadway run. Presnell is an energetic and commanding presence as the infamous "Leadville" Johnny Brown, but even his swagger and charisma waivers as the film reaches its second half.

Perhaps that's the biggest sticking issue with this fictionalized story is that it feels like two different films. The first half of the movie plays things light and goofy with a manic energy to its songs and characters. Once the second half gets rolling and Molly finds herself in Europe, the film loses a lot of energy. Even if you know the fateful turn Molly's return journey across the Atlantic Ocean took, 'The Unsinkable Molly Brown' fails to give the tragic sinking of the RMS Titanic the necessary drama and earnestness it deserves and is actually a bit heartless when you consider it is the event that spurs Molly into social acceptance. As if to suggest that 1,400 people had to die so she could enjoy the perks of a lavish lifestyle? I know this notion isn't intentional, but without the care and compassion the event requires, it feels disingenuous and callow.

To be fair, musicals in general, aren't my first source of entertainment. I tend to have a tough time with a film that features so much singing about insignificant topics. While I loved musicals like 'The Sound of Music,' 'The Music Man,' and 'Hello, Dolly!' I tend to find most musicals unwatchable, especially if there is a song virtually ever five minutes. While 'The Unsinkable Molly Brown' feels like it has too many tunes, the songs also feel flat and pointless. I can understand the excitement of the Wells Fargo wagon coming around or solving a problem like Mariah, but 'Molly Brown' left me without a single memorable tune - or at least one worth remembering. Even the front end "wishing song" fails to land its point as Debbie Reynolds skitters about motor-mouthing gibberish in between verses. I know that 'The Unsinkable Molly Brown' has its fans, I just can't count myself among them, even with great turns from Reynolds and Presnell.

With a fresh scan and some impressive color correction and restoration work, 'The Unsinkable Molly Brown' brings home a delicious 2.40:1 1080p transfer. To put it simply, this film is gorgeous on Blu-ray. Details are razor sharp allowing you to see and appreciate the impressive production design and costuming. In point of fact, one may argue that the quality of the image is almost too good as the clarity betrays some of the backdrops used for scenery and is especially noticeable when an adjoining scene was shot on location. From the sunny Colorado mountains to dusty Denver to the cooler toned scenes in Europe, this image displays an impressive range of color that allows for plenty of primary pop while allowing for natural flesh tones to come through. Black levels are inky and shadow separation provides the image with plenty of depth and dimension to enjoy - especially during the location scenes. The print is in fantastic shape without any age-related wear and tear to report. Aside from some occasional softness that feels more like focus issues than anything - this is a near flawless image and fans should be exceedingly happy to see the film in this condition.

With a crisp, clean, and resonant DTS-HD MA 5.1 audio track, 'The Unsinkable Molly Brown' is pitch perfect. The film's tunes and orchestral work dominate much of the track and work to fill in the surround elements making you feel like you're being wrapped up by waves of music. Dialogue and song lyrics come through with the expected crystal clarity. Much like the image quality, the restoration of this audio track makes it easier to notice small baked in inconsistencies like when the dialogue shifts from native recordings to dubbed in previously recorded lyrics. This isn't really a gripe, in fact, it put a smile on my face to hear these slight tonal shifts. As much of the film is comprised of music, sound effects are secondary so they're rarely used for building a sense of dimension and only have subtle notions of imaging. Again, this isn't really a negative because this is a musical after all, you should be paying closer attention to the songs. Free of any hiss, pops, or dropouts, this is a perfect mix.

While not being a huge fan of Musicals as a genre, I do have some favorites. Sadly, I can't count 'The Unsinkable Molly Brown' among them. For such an interesting historical figure, the musical and ultimately the film fail to do her justice. Debbie Reynolds gives it her all and Harve Presnell is a great watch, but the film itself just didn't do it for me. Warner Bros. through their Archive Collection bring 'The Unsinkable Molly Brown' to Blu-ray with an absolutely terrific A/V presentation. Fans will love seeing and hearing this film in such a great condition. Sadly extras are extremely slim. I may not have liked the film, but I know people who do love it and they're the ones who should absolutely put this on their purchase list. For the fans.

Sale Price 17.99
Buy Now
3rd Party 13
In Stock.
See what people are saying about this story or others
See Comments in Forum
Previous Next
Pre-Orders
Tomorrow's latest releases