A Shakespearean actor takes poetic revenge on the critics who denied him the Best Actor of the Year award.

That old Klingon proverb about cool temperatures being the ideal conditions to serve a dish of revenge is sound advice, but that may not always be the best way to serve said dish. Cold can be tasty, sure, but a little presentation and flavor can go a long way towards making it a satisfying, full-flavored experience. As Director Douglas Hickox proves with his 1973 film 'Theatre of Blood,' revenge is at its most delicious served with a dash of Shakespeare, a healthy portion of Vincent price, and a nice sprinkling of Diana Rigg.

The theatre is the first and only true love of veteran actor Edward Lionheart (Vincent Price). Even his daughter Edwina (Diana Rigg) has taken second seat to Edward's need to stand center stage. Year after year, Edward has committed his life and soul to reciting Shakespeare's great works to audiences. All he's ever wanted is a little bit of recognition from London's inner-circle of critics, the due recognition they seem intent on denying him while making Edward their critical punching bag. After confronting the group of heartless critics when they deny him the award he rightly deserves, Edward jumps from the window into the Thames. The critics assume Edward died in his dramatic leap, but little did they know death would be stalking them instead!

After surviving his attempted suicide, Edward befriends a band of drug-addled insane street people and uses them to enact his Shakespearian revenge. One by one, Edward picks off the critics that denied his life's work its meaning in grizzly and grotesque methods inspired by his theatre company's Shakespeare schedule. As the police are seemingly powerless to stop his schemes, Edward is saving his greatest performance of King Lear as a bloody grand finale to his diabolical plan. 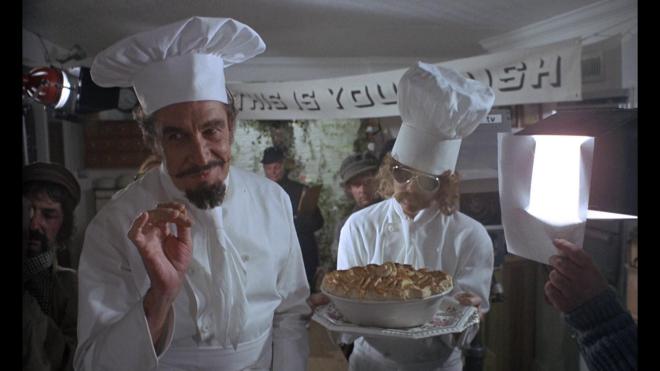 Chances are pretty good if you're reading this review, you're a Vincent Price fan. Even if you've never seen this film before, you're curious about it simply because it has Price as a headliner. It's understandable, the man was a genius in just about every project he took on. What's always impressed me about Price was his wry sense of camp with that slick grin of his. Even in some of his worst movies, he wouldn't let a poor script stop him from turning on the charm. Every movie he was in benefitted from his presence and the same absolutely must be said about 'Theatre of Blood.' While the plot is clever enough and it's well written, I don't think the results would have been the same if anyone other than Price took on the role of Edward Lionheart. It's a role designed for Price's sense of horror prowess and comedic timing.

Keeping the film moving at a great clip is the fantastic script by Anthony Greville-Bell under the direction of Douglas Hickox. At first, the film almost has this bizarre sense of randomness to it where Price's Edward would show up to dispatch some high society character in a particularly grizzly way and then disappear leaving that person's circle of friends to figure out what happened. It's almost like walking into the middle of someone else's joke and hearing only the punchline. It's still fun and creepy as Edward pops up, but there's this sense of "what the heck is going on here?" at play. Then the film chooses the perfect moment to get us caught up. When Diana Rigg's Edwina enters the frame, we get a quick crash course in catch up. While this scene does cast Edward's maniacal Shakespearian murderer in a sympathetic light, it also puts the fear of God into the rest of the cast - as well as the audience. Now we know everything Vincent Price's Edward is capable of as a master of disguise, and we start to wonder whether or not Rigg's Edwina is actually helping her deranged father or if she's trying to stop him.

'Theatre of Blood' is the most entertaining sort of horror picture, the one where you're actually rooting for the madman. As the audience, you don't want his victims to live and the film becomes a game of trying to figure out how Edward is going to kill off the next snob on his list. In an odd sort of way, this approach is partly why the slasher movies of the 1980s worked so well. We didn't really care about the camp counselors or hapless Crystal Lake residents, we knew going in they were there to die, we just want to see how Jason does it. 'Theatre of Blood' carries a lot of the traditional slasher trappings with an air of respectability. The film takes the material seriously enough to build suspense and dread and give Edward a reason to kill, but it's also keeping the violence fun and entertaining. As one murder tops the next, it's like watching the action set pieces of a Bond film unfold, one after another they become more grotesque and sensational. And through all of it, Price gives his traditionally menacing yet cavalier performance. 'Theatre of Blood' is a wildly entertaining horror flick that should keep genre fans on the edge of their seats while cheering every time Price gives his trademark wink and smile.

'Theatre of the Blood' arrives on Blu-ray courtesy of Twilight Time. Pressed on a Region Free BD50 disc, the disc is housed in a clear eco-friendly case, this was an apparent oversight on the production line, and not all copies will have eco-cases. Replacement cases can be purchased at the Twilight Time website. Also included is a booklet containing stills from the film as well as an interesting essay by Historian Julie Kirgo. The disc opens directly to a static image main menu with traditional navigation options.

Color me impressed with this 1.66:1 1080p transfer of 'Theatre of Blood.' I only have vague memories of the first DVD release and remember thinking the colors were rather drab, reds were a bit more maroon-toned, with a persistent haziness to the image. Thankfully it would appear that this transfer was given a far more recent scan as the results look wonderful. Film grain has been retained without any signs of DNR or smoothing and the image boasts some impressive detail levels throughout. Facial features, clothing, as well as Price's intricate costumes are on display. Some softness is retained, but that would appear baked in and not really a fault of the transfer. Colors appear accurate with plenty of primary presence when relevant - especially red! Flesh tones look healthy. Black levels are shadowy and inky giving the image a welcome three-dimensional quality to it. The only real issue worth reporting is the odd bits of print damage. Thankfully, it's nothing too serious, some odd bits of speckling, a small scratch here and there, and a couple of stained frames that zip past before you even notice them. Aside from the bits of slight damage, this is a pretty fantastic looking transfer.

'Theatre of Blood' arrives with a passing English DTS-HD 1.0 mono track. Dialogue is clean and clearly heard throughout most of the film. Certain moments have a bit of a heavy dubbed quality to it that can sound unnatural sometimes. Some scenes sound pitched a little too high making the voices sound a bit rough. Scoring by Michael J. Lewis comes through fine but has a tendency to overpower some moments, but thankfully it doesn't trip over the dialogue. There is some slight age-related wear and tear present. Every now and again a pop will crop up and there is some persistent hiss present. Nothing terribly intrusive, but present just the same. It's not a terrible audio track but it could perhaps benefit from a little more cleanup. Levels are just fine so once you've found a comfortable listening level, you shouldn't have to adjust volume any.

Audio Commentary: Film Historians David Del Valle and Nick Redman provide an interesting and informative anecdotal commentary track. Since none of the principal creative crew or performers are present, the commentary comes from a more historical approach but there is plenty or relevant information provided about the production and Vincent Prince in particular.

'Theatre of Blood' is a delicious sort of horror film that blends the perfect amounts of suspense and humor with a Shakespearian touch. Add in one of Vincent Price's best performances, and you have a great fright flick for any chilly fall evening this Halloween season. Twilight Time has done a great job bringing this film to Blu-ray with a beautiful image transfer, a solid audio track. Extras may be on the slim side, but the isolated score track is a great listen and film score fans should be very happy to hear it. This is a delightfully wicked movie that should entertain genre fans and this Blu-ray does the film justice. Recommended.