What could be worse for two cavalry officers than to battle with native tribes? To battle each other for the same woman.

Whenever a filmmaker hits a hot streak and has several successful films under his belt, I tend to try to find the cracks in their armor. Since I don't believe in a flawless filmmaker, I want to humanize that individual by seeing where their skills are lacking. Some filmmakers are great at staging action, some are great at dialogue but can't get their characters to do anything, others have a hard time giving their films any genuine sense of emotion. Some can't do any of those and are just bad at making movies. Other filmmakers wear their flaws on their sleeves, rise above them, and still manage to churn out some damn impressive films. One such filmmaker was the legendary Sam Peckinpah. A man whose own personal excesses trickled down into the screenplays and the films he directed, but when he was in his prime, he was a master storyteller. For director Arnold Laven, Peckinpah brings his genre-busting writing abilities to the classic cavalry western 'The Glory Guys.'

The western frontier is a wild and untamed territory - and the U.S. Calvary is going to bring law and order to it. Whether through treaty or by the rifle, the Sioux tribes will be brought under control. Per orders, Captain Demas Harrod (Tom Tryon) is tasked with bringing in a new squad of troops. Men like the rough and tough Irishman Anthony Dugan (James Caan) are eager for the job - the only problem is they don't have any combat experience. They're green as a grassy meadow in springtime. Normally, Captain Harrod would have all the time needed to break these men, train them, and turn them into skilled fighting men. Unfortunately, General Frederic McCabe (Andrew Duggan) has visions of victorious battles and he wants these new men ready to ride immediately.

Adding to Harrod's woes is his love for the beautiful Lou Woddard (Senta Berger). Lou is everything Harrod has ever wanted in a woman, accept he's a cavalry soldier and his chances of survival are relatively slim in that line of work. On top of that, a scout by the name of Rogers (Harve Presnell) has eyes for Lou and designs for marriage and can actually provide for her as a husband. While both men work for the Army, only one of them actually has to go into combat. In order to train the new men, Rogers and Harrod will have to set aside their differences long enough to whip the men into fighting shape. As Rogers and Harrod are already working under the gun, they'll have to contend with the inflating ego of a general hell-bent on leading his troops into combat - whether they're ready to fight or not. 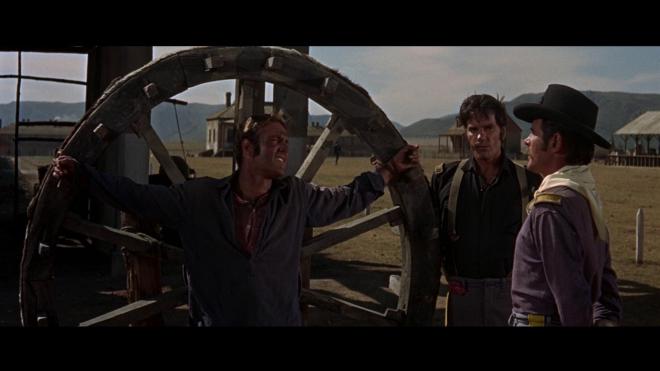 While 'The Wild Bunch' may be widely regarded as the movie that launched Peckinpah's star as a creative force to be reckoned with, I would argue that his screenwriting duties for 'The Glory Guys' helped put him on that path. As he would later demonstrate with 'The Wild Bunch,' Peckinpah takes all of the familiar character archetypes and genre tropes of the traditional cavalry western like 'She Wore A Yellow Ribbon' or 'Fort Apache' but gives it a playful little spin. While the film has an earnestness to it, it's nearly impossible to miss the charm and the sense of humor. Some sequences, especially the fistfight between Tim Tyron's Harrod and Harve Presnell's Rogers, borderline on parody. Harrod's and Rogers' wooing of Senta Berger's Lou is most certainly melodramatic and would be something regularly found on daytime television, it feels intricate and important enough to the plot that the meandering back and forth of which man Lou actually loves gives weight to the moment when the big battle comes and both men know they have an equal chance of meeting death. James Caan's drunken Irish Dugan may be a bit of a comical buffoon, but at the same time, we're given enough time with him to actually care about him as a person and hope that he and his fellow soldiers make it out alive.

Perhaps what impressed me most about this film is that it works as a thinly-veiled Vietnam War allegory as applied through a version of General Custer. Even though this film was written nearly ten years before it was finally made, the allegory is applicable. Green soldiers without any war experience, fighting prowess, let alone the ability to use the equipment handed to them are expected to engage in battles with a fierce, well-trained, and experienced army at the insistence of a madman. Their lives aren't important because back east, there are more men and more horses waiting to replace them. It's an impressive scene when Harrod meets his new recruits for the first time. He knows he's been given an impossible task, but he's going to do the best he can with the time given because it's the only way any of them are going to survive. It's equally impressive because as a commanding officer Harrod is brutally honest with the men that they've essentially joined the army to die and since they volunteered, there's nothing they can do to get out of it.

As a life-long fan of westerns, I love discovering a new one. While there are plenty of westerns out there I haven't seen yet, finding one that is genuinely good, well acted, with a fierce and exciting climatic battle is a real treat. So many play things to the baselines of an honest man cleaning up the crooked town that it starts to feel a bit redundant after awhile. Seeing a film like 'The Glory Guys' is actually a welcome breath of fresh air. Arnold Laven may be the credited director for 'The Glory Guys,' but it has that signature flavor of richly-developed and likable characters entering a hyper-violent world they're not prepared to exist in. If you're a fan of Sam Peckinpah, 'The Glory Guys' absolutely should be on your watch list.

'The Glory Guys' arrives on Blu-ray courtesy of Twilight Time. Pressed onto a Region Free BD50 disc, the disc is housed in a standard clear Blu-ray case with a booklet containing an essay by historian Julie Kirgo. The disc opens directly to a stick image main men with traditional navigation options.

'The Glory Guys' arrives on Blu-ray with a beautiful 2.35:1 1080p transfer. It's not quite perfect, there are some age-related issues holding it back, but the film looks very good. Fine film grain is present throughout leading to some sumptuous detail levels. The costuming is the big star in that regard as the uniforms as well as the dresses for the women in town all arrive with great clarity. Close ups tend to look the best. Some middle shots can appear a tad soft and out of focus in a few places leading me to wonder if this transfer was sourced from an archival print of some sort. Thankfully these clarity inconsistencies are relatively few and far between. Most of the time the image is free of any damage or speckling, but when an optical zoom is about to kick in, the image gets notably grainier and some small scratches can creep in. Colors are warm and vibrant throughout favoring the dusty yellows and browns of the Durango scenery with plenty of natural primary pop. Blues especially stand out nicely. Black levels are inky and rich for the most part allowing for plenty of depth to the image. All around this is a very good transfer for a catalogue release.

'The Glory Guys' arrives with a strong and resonate English DTS-HD MA 1.0 mono track. So much of the film is of a comical and dramatic conversational nature that you often forget to keep an ear out for the rich sound effects layering, but if you listen they're there. From the sounds of riders off in the distance to the hustle and bustle of town, there is a wonderful sense of atmosphere present throughout the film. The classic western-style score by Riz Ortolani bumps things up a few notches when and where necessary without overpowering the rest of the mix. When the big battle gets going the track really comes to life as there is a cavalcade of gunfire and horses and men screaming in pain. The mix handles this big battle sequence beautifully providing a very natural and immersive quality to the track even though it's only coming through one channel.

Audio Commentary: Film historians Paul Seydor, Garner Simmons, and Nick Redman provide a fascinating and informative commentary track here. There had long been a great deal of speculation that Peckinpah had directed this himself but wasn't ever given credit and they go to great lengths at dispelling that rumor that this was absolutely a Laven film with a decided Peckinpah flavor.

Passion & Poetry: Senta & Sam: (HD 26:31) The German actress talks about her long-term working relationship with Sam Peckinpah and goes into detail about her career and how they met.

The James Wong Howe Story: (SD 8:23) This is a fascinating brief little look at the esteemed cinematographer.

Promoting 'The Glory Guys': (HD 3:34) This is a fun little look at the promotional materials assembled for the marketing of the film

'The Glory Guys' is a traditional cavalry western with that unique genre-busting Peckinpah flair. As one of his early works to be directed after he became a hot commodity, 'The Glory Guys' is Director Arnold Laven's film, but Peckinpah gets a lot of the credit for the rich characters and intense action. It's a wonderful western that never fails to entertain. 'The Glory Guys' makes a welcome leap to Blu-ray courtesy of Twilight Time with a fantastic video transfer, a rousing audio mix, and some informative extra features. 'The Glory Guys' comes recommended.