When Sadie Thompson winds up stranded on an island while her boat is being quarantined, she manages to stir up the blood of every marine on the base.

"She's Back!" That was the slogan the publicity department at Columbia Pictures came up with in 1952 to herald the return of actress Rita Hayworth after a four-year film hiatus. Amid much fanfare, Hayworth left Hollywood in 1949 to wed Prince Aly Khan, son of the Aga Khan, the wealthy spiritual leader of the Muslim faith. The marriage, however, only lasted a couple of years, and when Hayworth took her place before the cameras once again, she exuded a more mature, worldly persona. Still glamorous? Oh yeah. But the Hayworth of the 1950s was damaged goods, and the scars were evident. Now 35, she'd had her share of hard knocks, endured numerous betrayals by husbands, lovers, and industry professionals, and was at last ready to assert herself as a tough dame ready to be reckoned with.

Which made her perfect for the role of Sadie Thompson, one of W. Somerset Maugham's most famous and notorious heroines. In Maugham's short story, 'Miss Thompson' (later retitled 'Rain'), Sadie is a good-time, promiscuous woman who arouses the ire of Reverend Davidson, a militant, Bible-thumping zealot who at first rebukes her, then becomes obsessed with reforming and converting her when both are stranded on a South Sea island during monsoon season. The ceaseless rain, oppressive humidity, claustrophobic lodgings, and fiery clashes between Sadie and Davidson ramp up tension to the breaking point, leading to a dramatic - and ultimately tragic - confrontation.

'Rain' had been filmed twice before (Gloria Swanson starred in a silent version in the late 1920s, and Joan Crawford tackled the part in an early talkie a few years later), but Hayworth's turn would be the most lavish, featuring Technicolor, location shooting on the Hawaiian island of Kauai, and 3D photography. It also would be the story's most sanitized screen treatment, as the strong arm of censorship softened the film's most explosive elements. And yet there's still something raw and real about 'Miss Sadie Thompson' that helps it overcome the contrivances that conspire to bring it down.

That "something" is Hayworth, who attacks her meatiest role to date with a ferocity audiences hadn't previously seen from her. Loose, confident, and deftly balancing the character's tough, tender, and vulnerable sides, Hayworth fully embraces Sadie and flaunts an earthy naturalness that enhances her allure. (Her impressive performance prompted Maugham to name her his favorite screen Sadie.) Whether trading barbs with the Marines, performing a scorching dance to 'The Heat Is On' (and, boy, is it ever!), or locking horns with Davidson (played with appropriate pompous piety by Jose Ferrer), Rita is always real…and always mesmerizing to watch.

Sadly, though, the adaptation isn't as riveting and adult as Hayworth's portrayal. Although Davidson does, shockingly, call Sadie a prostitute at one point (in another key instance, the word is notably and obviously bleeped out), the writers dial back her image, painting her as a good-natured, misunderstood party girl harboring a shady past that keeps her on the run. (Crawford's Sadie was far more trashy with regard to makeup and costume.) When her New Caledonia-bound boat is quarantined for a week at a South Sea Marine outpost, Sadie becomes the object of affection for a platoon of sex-starved servicemen, led by Sgt. Phil O'Hara (Aldo Ray), a strapping, hairy-chested specimen with a raspy voice who tries to keep his salivating buddies at bay. But Sadie doesn't need his help. As one character wryly proclaims, "The situation has landed and has the Marines well in hand."

Not everyone, however, succumbs to Sadie's "charms." Davidson, a holier-than-thou missionary of unspecified faith, and his wife - also passengers on the stranded ship - abhor her rough edges and lack of morals, and denounce her lewd behavior. Sadie openly defies them, but just as her romance with Phil begins to blossom, Davidson uncovers her checkered past and threatens to deport her to America, where she will certainly face retribution for her vague "crimes." (Just when did working as a singer in a "clip joint" and not rebuffing the attentions of men become illegal?) The revelations lead to a 'Streetcar Named Desire' repudiation by Phil (who somehow believed his hard-drinking, erotic-dancing dream girl was as pure as the driven snow), which prompts a devastated Sadie to seek salvation…with disturbing results.

The writers appeased the censors by watering down the story and peppering it with a few musical numbers ('The Blue Pacific Blues' was nominated for an Oscar for Best Song), but then director Curtis Bernhardt ironically taunted them by filming a blistering hot Hayworth dance. Drenched in sweat and resembling an animal in heat, Rita fires on all cylinders, bumping and grinding and oozing sex appeal while an army of Marines howl, hoot, and shamelessly vie for her favors. Bernhardt also infuses the film with enough significant reaction shots to telegraph the tale's salacious angles loud and clear. As a result, 'Miss Sadie Thompson' was banned in several states, which affected its box office take and inspired Columbia studio chief Harry Cohn to lose interest in Hayworth and focus his attention on a new - and younger - sex symbol, Kim Novak.

Which is a shame, because 'Miss Sadie Thompson' features one of Hayworth's most full-bodied (no pun intended) portrayals, and should have helped her transition into more mature and substantive roles. Despite occasional pacing issues and conflicts of tone (the musical sequences, though fascinating, seem out of place and stall the film's momentum), the movie has many fine dramatic moments and its timeless themes still ring true today. Many women have played Sadie, but Hayworth finds a way to make this complex, conflicted heroine her own, and this well-produced motion picture celebrates both women's spirit, toughness, and independence. 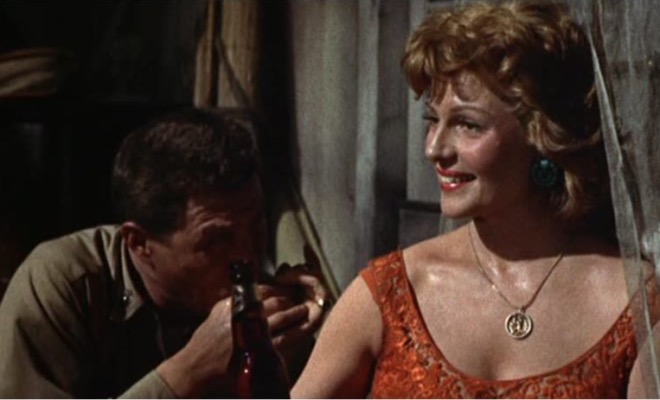 'Miss Sadie Thompson' arrives on Blu-ray in both 3D and 2D versions, and is packaged in a standard case. An eight-page booklet featuring an essay by film historian Julie Kirgo, color and sepia-tinted photos, and a reproduction of the movie's poster art is tucked inside the front cover. Video codec is 1080p/MVC MPEG-4 (3D) and 1080p/AVC MPEG-4 (2D), and audio is DTS-HD Master Audio 1.0. Once the disc is inserted into the player, the static menu with music immediately pops up; no previews or promos precede it.

Some classic 3D transfers, such as 'Kiss Me Kate,' dazzle the senses with eye-popping color and clarity, while others look grainy and faded. Unfortunately, 'Miss Sadie Thompson' falls in the second category. Though isolated moments of this 1080p/MVC MPEG-4 transfer brim with stunning hues and crisp details, most of the time a thick layer of grain and washed out color dull the picture's dimensional impact. As a result, the Kauai locations lose a fair degree of their luster, and Hayworth's palpable allure is frustratingly muted. The latter especially is a shame, as the prospect of seeing a sweaty Hayworth shimmy, shake, and gyrate in 3D was quite exciting. She's still a thrilling presence, and seeing any Golden Age 3D film in its original format is always a treat, but the hoped-for wow factor is sadly lacking.

No 3D gimmicks are employed here. The straightforward, subtle presentation confines most of the visual effects to the foreground, expanding the movie's visual real estate and enhancing depth levels. Lines, for the most part, are well defined, and the omnipresent rain is especially well rendered in 3D. Unlike other pictures of the period, the 3D photography isn't the film's focal point and never intrudes upon the narrative. Instead, it heightens the drama's immediacy and intensity, and brings the characters more fully to life. Unfortunately, atmospheric elements like smoke and mist often cloud the image and lend it a gauzy, filtered look that's not at all attractive.

The source material has been nicely restored and is free of any annoying nicks or scratches, but the color has noticeably faded, with some scenes exteriors adopting a yellowish tint that diminishes the lushness of the verdant Kauai landscapes. Hayworth's red skirt in her entrance scene exudes a pleasing boldness, but most of the other hues lack vibrancy. Flesh tones err toward the orange side, while sharp close-ups highlight the perspiration that glistens on almost everyone's faces. Background details can be a bit fuzzy due to all the grain, but shadow delineation is good and decent black levels supply welcome weight to the image.

The same deficiencies afflict the 2D version, but the issues aren't severe enough to hamper one's enjoyment of the film. Though the transfer for 'Miss Sadie Thompson' may not meet expectations, it's still a solid effort, especially when one considers the movie's advanced age. The fact that we're able to see this 63-year-old production in 3D at all is a gift, and I'm grateful Twilight Time has given us the opportunity.

The DTS-HD Master Audio 1.0 track supplies clear, well-modulated sound that fills the room with ease. Thankfully, no age-related hiss, pops, or crackles intrude, and excellent fidelity and tonal depth bring the film's songs to life. A wide dynamic scale keeps distortion at bay and gives all the highs and lows free rein, and all the dialogue is easy to comprehend. The main atmospheric is, of course, the rain, and it's well woven into the track's fabric, punctuating the action without overwhelming it, while the raucous soldiers add aural vitality to several scenes. Though this track isn't overly active, it performs well and keeps us engaged, which is about all we can ask of it.

A couple of supplements enhance this 3D release.

Sadie Thompson is a role Rita Hayworth was born to play and she gives it her all in this captivating 3D production. Though it's a thrill to see one of Hollywood's most beautiful actresses strut her stuff in 3D - especially in the blisteringly sexy 'The Heat Is On' number -  'Miss Sadie Thompson' stands on its own as a solid, sincere adaptation of W. Somerset Maugham's provocative short story about a fallen woman's struggle for acceptance and redemption. Twilight Time presents the film in the best possible light, but even a meticulous restoration can't erase all the ravages of time. Still, it's a treat to see this movie in its original format, which brings Hayworth's finely etched portrayal to brilliant life. If you're a Hayworth fan, be sure to grab this limited edition disc before it's gone. Recommended.