In 1880s Kansas, sharpshooter turned rancher, Clay Travis, goes from happily married father of two to a man on a mission after the tragic death of his son and the disappearance of his daughter. Determined to bring his daughter home, and to protect what little family he has left, Clay leaves his quiet ranch and heads to Wichita and on to Dodge City with help of unlikely companion Billy, leaving a trail of gun smoke and dead bodies in their wake.

Westerns seem to be the perfect breeding ground for revenge films. One man has a grunge against another, bad stuff happens for an hour or so, and then the film is capped off with a dramatic gunfight with our hero riding off into the sunset. It's a pretty rote routine and one that has permeated throughout the genre since the very beginning. While the setup and outcome are usually the same, it's the plot particulars and characters that can help a western strike gold or bite the dust. Timothy Woodward Jr's 'Traded' starring Michael Paré, Kris Kristofferson, Trace Adkins, and Tom Sizemore tries using 'Taken' as an inventive foundation, but the final film never really comes together.

Clay Travis (Michael Paré) is a gunslinger who has hung up his belt. His days of killing, besting men on the quick draw and murdering men for money are over. With a successful ranch, a beautiful wife named Amelia (Constance Brenneman), a lovely young daughter named Lily (Brittany Elizabeth Williams) and a small son (Hunter Fischer), his life couldn't be better - or more importantly, peaceful. But when his son suddenly dies after a snake bite, Clay's picture-perfect life begins to tear apart. As Amelia is unable to deal with her grief, Lily decides it's time to strike out on her own and get a job with the Harvey Girls so she can see the country, earn a living, and perhaps find a husband.

When Clay and Amelia set out to intercept their daughter, Clay's worst nightmare becomes a reality. Lily never made it to the Harvey Girls, she was kidnapped and taken by a man named Marlowe (Joshua LeBar). Clay is forced to wear his gun belt one last time in order to rescue Lily. But as he uncovers more about Marlowe and the man he worked for called Stover (Trace Adkins), Clay's journey to find his daughter has just begun. Only an old flame named Nell (Natalia Cigliuti) and a barkeep called Billy (Kris Kristofferson) can offer any help to Clay and his quest to find his daughter and bring death to the men that took her. 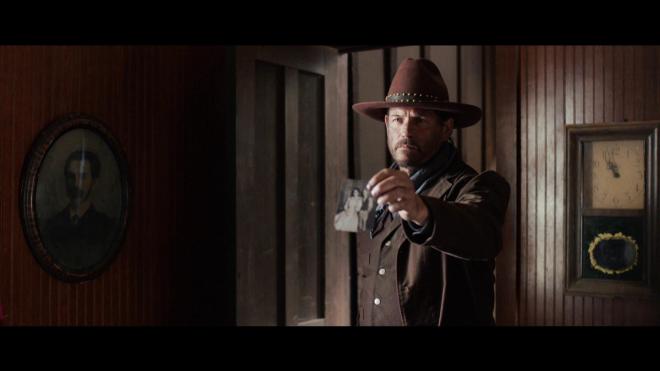 As far as low budget, direct to video westerns go, 'Traded' starts out well and good. It takes its time to set up Clay and his family, learn a little about his deadly backstory, and then set the stakes when Lily runs away. This isn't to say that these moments are best written or all that original, but for all intents and purposes, they work. A little cheese ball at times, but I could go with it. Where the film starts to go off the rails is when the main story begins. Everything quickly becomes cookie-cutter cliché. Characters pop up, come and go, or get outright shot because that's what they're there for. Not because they really do anything to further the plot along or work to change the course of the hero's journey. The surly bartender, the hooker with a heart of gold, an abusive father - all are familiar elements from other better westerns that just aren't put to good use here.

This is perhaps the fist time I've taken issue with a film's cover artwork and how it effects story expectations, but with 'Traded' I feel that it's worth bringing up. The film's sleeve has Trace Adkins front and center and top-billed seemingly making him the main character. He's not. He's barely more than a cameo. The same goes for Kris Kristofferson as the veteran actor has little more than five minutes of very randomly placed screen time for an hour and forty minute movie. Those expecting either musician to make much of an appearance will be sorely disappointed. This isn't to say that Michael Paré doesn't deserve his accolades because he does, it's just that expectations aren't likely to be met when people settle down with this dusty western.

On top of running through one cliche after the other, I have to mention the editing. This may sound like an odd tangent but it's the best way I know how to discuss it. Mystery Science Theater 3000 took a few jabs at the films of Ed Wood, and one of their funniest running jokes for all of those films was how Ed Wood wouldn't edit out redundant material. If the person was driving to someplace important, he'd show the needless journey as well as show them park the car, get out of the car, and walk into the building, down a hallway, through a door and then finally introduce the next character. Their ongoing riff for these moments was a sarcastic "Film it all Ed!" Several times throughout 'Traded' I caught myself saying those very same words. For all of the walking, riding, getting on of horses, getting off of horses, walking up stairs, walking down stairs, opening doors, closing doors, this film could easily have been fifteen minutes shorter and perhaps been a leaner and meaner little thriller as a result.

While Michael Paré delivers yet another great performance, sadly he's not enough to carry the dead weight surrounding the film. It's a shame too because so often Paré has been stuck in thankless walk-on and instantly get shot roles that it actually felt like he was playing a true leading character again. He's a believable gunslinger turned peaceful father, he's a character to root for but is caught in a bland film. Had this film gone through some rewrites and some tighter editing, the final product could possibly have been something worth recommending. As it rests, I had a tough time enjoying this one. It starts out well enough, but it didn't sustain tension or energy well enough to keep me invested in what's happening.

'Traded' arrives on Blu-ray courtesy of Cinedigm. Pressed onto a Region A BD25 disc, the disc is housed in a standard Blu-ray case with identical slip cover. The disc opens with trailers for other Cinedigm releases before arriving at an animated main menu with traditional navigation options.

'Traded' arrives with a pretty decent digitally shot 2.40:1 1080p transfer. Details are pretty stable throughout and showcase the film's impressive costuming, makeup, and production design work. The movie never looks cheap. Establishing shots are pretty great as they have that beautiful yellow desert old west flavor. Colors are well balanced while favoring sunny yellows and gold tones, there is still plenty of primary pop and healthy looking flesh tones. Black levels are pretty decent, although there are few scenes that have much in the way of shadows or deep blacks to showcase them. Depth is present throughout. There is some occasional softness from time to time and some scenes can have that "video" vibe to them, but it's not a terrible issue. All around this is a very good looking movie that translates well to Blu-ray.

'Traded' comes with a strong if slightly underwhelming English DTS-HD MA 5.1 audio track. Dialogue is crystal clear throughout and is never difficult to hear or at odds with the sound effects, ambients, or the score by Samuel Smythe. Sound effects and atmospherics are decent but can feel a bit restrained at times, they never really feel like they're making full use of all the channel space and can sound a bit front loaded at times. The score does help even things out, but even then the mix still feels very front/stereo. When the action kicks in the audio gets an appropriate boost without needing to fiddle with your levels. Free of any other anomalies, this is a decent audio mix that gets the job done.

Five Minutes to Dodge: The Making of 'Traded': (HD 8:02) Some pretty typical EPK material, but director Timothy Woodward Jr. does offer up some pretty decent material about casting, scripting, and working on set.

Deleted Scenes With Optional Commentary: (HD 5:32) There is some actually really good missing sequences here - some of the extraneous stuff that could have been cut would have made plenty of space for these moments. These are the kind of character sequences that should have been left in.

I wanted to like 'Traded,' I really did. It's awesome to see Michael Paré playing a gunslinger, and anytime you can get Kris Kristofferson on a horse is a good day, but sadly they're not enough to make up for some script and editing shortfalls. It's a watchable movie, but nothing I'd adamantly recommend to folks looking for some classic old west action. Cinedigm brings 'Traded' to Blu-ray with a strong A/V presentation, extras are slim, but they're worthwhile viewing if you enjoyed the movie. At the end of the day, 'Traded' makes a pretty good rental. A blind buy is a tough sell.

Sale Price 6.95
Buy Now
3rd Party 1.01
In Stock.
See what people are saying about this story or others
See Comments in Forum
Previous Next
Pre-Orders
Tomorrow's latest releases