Newly Re-mastered in HD! Kate Nelligan (Eye of the Needle), John Malkovich (In the Line of Fire) and Linda Hunt (The Year of Living Dangerously) star in this true story of a mother s love for her children and a son s revenge. In 1948, as the civil war ravages Greece, a communist attachment terrorizes a small mountain village by abducting the children and sending them to communist camps inside the Iron Curtain. Eleni (Nelligan) defies the communists and arranges for the escape of her three daughters and her son Nicola. For this act she s imprisoned, tortured and executed in cold blood. Several years later, Nicholas Gage (Malkovich), Eleni s son and a New York Times reporter, returns to his homeland to discover the facts surrounding his mother s death, and to hunt down the man who murdered her. Featuring top-notch direction by the great Peter Yates (Robbery, Bullitt) and stunning on-location cinematography by Billy Williams (Gandhi).

Watching a film about horrific war-time atrocities is never an easy experience. It's difficult to look at these events with a critical, earnest, and yet artistic eye and not question authenticity or motive. You want to trust that the filmmakers and writers aren't simply exploiting an event for monetary gain and are in fact, doing their best to recreate events and bring them to light for a mass audience. Peter Yates' 1985 film 'Eleni' traverses the real events surrounding the 1948 civil war that erupted in Greece and how thirty years later, one man is trying to uncover the truth of events that lead to the murder of his mother. The juxtaposition of time periods and the film's focus on real life characters elevates what could have been an otherwise depressing slog through pain and suffering and keeps the film feeling alive and hopeful.

Nicholas Gage (John Malkovich) is a successful reporter for the New York Times. As 1979 is coming up, it marks 30 years since the end of the civil war in Greece. This milestone isn't just a number on the calendar, it marks when the commanders and soldiers who lead the communist uprising who also committed any number of atrocities can come home because the statute of limitations will run out for such crimes under Greek law. When Nicholas was a child, he and his siblings had to flee Greece to America to escape the horrors while their mother Eleni (Kate Nelligan) was forced to stay behind as a prisoner of a sadistic general known as Katis (Oliver Cotton). After accepting a job as bureau chief in Greece under the guise of reporting the events surrounding the soldiers' return, Nicholas embarks on an emotionally painful journey to uncover the truth of what happened to his mother. As he finds pieces of the puzzle, Nick learns that Katis is alive and well and that the old man is willing to grant an interview.

Based on the book by real-life reporter Nicholas Gage, 'Eleni' works on several levels. On one hand, the film is a document of wartime atrocities where families are displaced and children are forced into service as soldiers for a cause they don't believe in. On the other hand, the film is a gripping investigative procedural. Because the film takes place during two time periods, it's essentially told through the eyes of a mother and her grown son. As John Malkovich's Nicholas uncovers one piece of the story, the film segues to tell things through the eyes of Kate Nelligan's Eleni. At first, it may seem to be a meandering way to tell a story, but what this breaking in timeline continuity does is set the groundwork for a thrilling and intense final scene. It's in the final moments where everything comes together and your patience through some pretty horrendous, gut-wrenching scenes pays off. When Nicholas sits down in front of an elderly Katis knowing full well who the man is and what he's done, you're on the edge of your seat because you know Nicholas is capable and willing to do anything he puts his mind to. 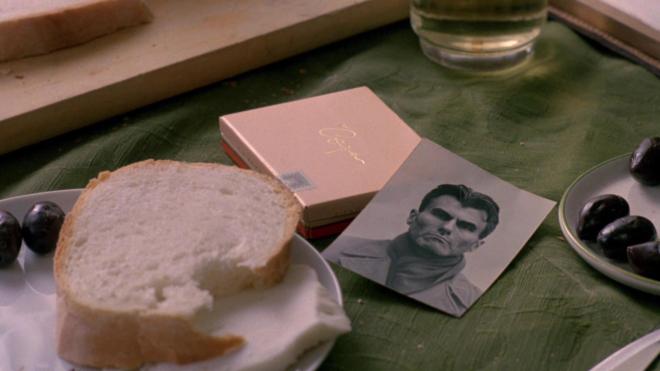 Working from a screenplay by Steve Tesich, Peter Yates is in excellent form with 'Eleni' as he manages to craft a thoughtful and personal, character-driven film against the backdrop of a terrible tragedy. There is a sense of reality and urgency in each little vignette that is revealed through Nicholas' investigations. While we see this man try and learn more about his mother's murder at the risk of losing his family, we see how in the face of horror a woman fought to save her children by risking her own life. It's powerful material that never dips too heavily into cheesy soap opera melodrama. Nor does the film focus too intensely on the conditions Eleni spent her last days. The film certainly does not shy away from what happened, but it doesn't settle on images or events so gratuitously so that it cheapens the effect. It shows just enough to convey the horror and treats the material, the characters, and their real life counterparts with an amount of genuine respect.

I never knew much about the civil war in Greece. It wasn't a topic that made my social studies books in grade school except in passing as a moment of a communist uprising. On top of being an excellent example of filmmaking and character exposition and story structure, 'Eleni' proved to be a very engrossing and educational film. I left my viewing of this film wanting to learn more about what happened. In particular the circumstances of how people who committed crimes against civilians could somehow escape persecution simply because a certain number of years passed. Thankfully there is a lot of valid information online so that the curious can learn more about these events. I wouldn't say that 'Eleni' is an entertaining film, that doesn't feel like an appropriate way to describe it. It is an intense and effective film that plays to the conventions expected from a procedural thriller and a war-time drama without simply being a piece of frivolous entertainment. It's a film that is tough to watch without feeling exhausted by it and yet provides an equal sense of hope and humanity. All I can say to close this review is that I strongly suggest people give the film a look and experience it for themselves.

'Eleni' arrives on Blu-ray courtesy of Kino Lorber through their Studio Classics line. Pressed onto a Region A BD25 disc, the disc is housed in a standard Blu-ray case and opens directly to a static image main menu with traditional navigation options.

Aside from some very slight speckling here and there, the 1.79:1 1080p transfer for 'Eleni' is virtually flawless. The description on the back artwork indicates that this transfer was newly remastered and the efforts show on screen. Grain looks natural and unobtrusive and provides a rich amount of detail. This is especially apparent when the film shifts to 1948 and the Greece locations come into focus. Colors have plenty of primary pop with healthy flesh tones. The image boasts some impressively inky black levels without any crush issues and provides a pleasing amount of depth to the image. All around this is a very impressive transfer for a back catalogue release, and fans of the film should be very happy to see it.

With a strong and audible English DTS-HD MA 2.0 track, 'Eleni' sounds fantastic. As a largely dialogue driven film, voices are clearly heard throughout without any interference from sound effects or the beautiful score by Bruce Smeaton. Sound effects and background atmospherics provide a nice sense of space and dimension as the film shifts from the crowded and chaotic newspaper bullpen to the wide open Greek vistas. My only slight complaint is that even as a stereo mix, imaging feels rather restrained like the sound is being pushed through the front/center so heavily that it doesn't quite get enough room to breath during busy scenes. It's only a minor quibble for an otherwise excellent track.

'Eleni' turned out to be a wonderful film. I've only seen a handful of Peter Yates films, 'Breaking Away' being my favorite, but watching 'Eleni' shows the director had a deft touch when dealing with complex emotional characters without pushing the material into cheap melodrama. Kino Lorber brings 'Eleni' to Blu-ray with an exceptional image transfer and an excellent audio track to match. Fans of 'Eleni' shouldn't hesitate a moment before making a purchase. Those new to the film or who have never even heard of it should put it on their watch lists. Recommended.