The third installment of the blockbuster Divergent series franchise, ALLEGIANT takes Tris (Shailene Woodley) and Four (Theo James) into a new world, far more dangerous than ever before.

After the earth-shattering revelations of Insurgent, Tris must escape with Four and go beyond the wall enclosing Chicago. For the first time ever, they will leave the only city and family they have ever known in order to find a peaceful solution for their embroiled city. Once outside, old discoveries are quickly rendered meaningless with the revelation of shocking new truths. Tris and Four must quickly decide who they can trust as a ruthless battle ignites beyond the walls of Chicago which threatens all of humanity. In order to survive, Tris will be forced to make impossible choices about courage, allegiance, sacrifice and love.

Much like the previous two entries, 'The Divergent Series: Allegiant' arrives with even more nonsensical, head-scratching confusion that only succeeds in bloating the franchise's original premise. The production feigns complexity where simplicity is more than adequate in moving the plot. Granted, the story by four writers who took inspiration from the final book in the series by Veronica Roth make the attempt in explaining the initial problem of the first movie: how is being good at everything, known as a "Divergent," a threat to the five-faction society? At one point, Jeff Bridges pops up to literally shrug off that question ("I don't know who told you being different was a bad thing.") as if to almost literally address dissenters of the franchise. But his elaborate explanation only poses more questions, creating a philosophical and scientific conundrum that ultimately makes the entire franchise a complete absurdity and a waste of time. If Bridges's character is a voice for Roth and the filmmakers, then Shailene Woodley's confused Tris serves as a stand-in for the puzzled audience when hearing all this: "But that doesn't make any sense."

Perhaps, a major problem with this two-part finale is that filmmakers have done as other franchises based on YA novel trilogies, breaking the final book in the series into two ridiculously long — and consequently, exhaustive — movies. This may expand on the grimly fabricated dystopia, but it does little for making an enjoyable piece of throwaway entertainment. And in spite of having the extra time, the movie still feels oddly rushed and hurried. In the opening moments, we're quickly rushed through the aftermath of the previous entry's revolution and the assassination of Kate Winslet's Jeanine with little time to take it all in. Evelyn (a rather stiff and cold Naomi Watts), mother of Four (Theo James) and leader of the resistance, has now taken on the role of bureaucratic dictator when holding mock trials for the remaining opposition forces and issuing death sentences. Tris's brother Caleb (Ansel Elgort) is next on the list to die. Naturally, these is going to create some friction amongst those who are not as cold-blooded, such as Tris and her small band of warriors, as well as those choosing to follow Octavia Spencer's more pacifist approach. 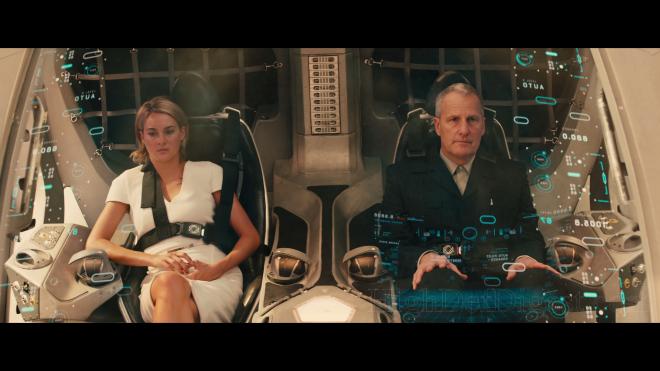 So, now we have the dawn of a revolution threatening to destroy all of Chicago, which we're lead to believe is the central focus because it's barely been explored, but it's soon consigned to factionless subplot turf when Tris and company scale over the wall into red uncharted territory. She's followed by Zoë Kravitz, Miles Teller and Maggie Q like puppies begging for a few scraps of screentime. But the only actor really given anything meaty worth chewing on is Teller's Peter, who again is eye-rollingly playing Judas to Tris's blatantly Christ-like persona. (She is the chosen miracle after all.) While exploring the Mars-like terrain, being chased by Evelyn's new Dauntless henchmen and scurrying to find shelter from a rain that looks like blood, the kids are discovered by the armed soldiers of the Bureau of Genetic Welfare, a spookily clandestine group lead by Bridges's David. Although his role explains a few absurd details posited by the two previous installments — except, he really doesn't — much of this storyline feels like a rehash of the first. Tris trusts the seemingly cordial and chummy David until convenient trivialities give her pause and raise our suspicions, discovering the promised utopia is a sham for a more sinister scheme.

But to be perfectly honest, the intended conspiracy plot grounding 'The Divergent Series: Allegiant' is a convoluted series of pseudoscience and faux moral controversies that ultimate make the entire franchise outrageously ludicrous. Director Robert Schwentke returns to helm this sci-fi post-apocalyptic vision for younger audiences with some moderately feeble success, fixing some of the problems of the film's predecessors by injecting it with better and more engaging action sequences. Much of this is really thanks to the beautifully glossy photography of Florian Ballhaus, eye-catching production design by Alec Hammond and costume designer Marlene Stewart creating a realistic world that's as visually interesting as it is fantastically imaginative. But in spite of their frankly wasted efforts, the film is a joyless and soulless escapade, as if making up much of the BS nonsense while chugging along to a finish that literally feels as though it just stopped halfway into it. And from the looks of box-office returns and Lionsgate's decision to cut the final production's budget by half, even allegiant audiences are growing tired of the series.

Summit and Lionsgate Home Entertainment bring 'The Divergent Series: Allegiant' to Blu-ray as a two-disc combo pack with a flyer for an UltraViolet Digital Copy. The Region A locked, BD50 disc is joined by a DVD-9 copy of the movie and housed inside a blue, eco-cutout case with a lenticular slipcover. After several skippable trailers, viewers are taken to a menu screen with full-motion clips and music.

The third installment in 'The Divergent Series' ziplines across a desolate landscape on Blu-ray with a gorgeous, reference quality 1080p/AVC MPEG-4 encode that's faithful to the stylized photography of Florian Ballhaus. Shot with a combination of Arri Alexa 65 and XT cameras — the former of which is a new system that captures images equivalent to 5-perf 65mm film — the picture quality is quite stunning and highly revealing. Most impressive is that it doesn't look or feel like the result of a digital motion camera, which, I'm sure, is as much to the credit of Ballhaus' talent as it is the camera system.

The overall palette favors the warmer, amber hues to create a hot, sun-drenched feel, which adds texture and personality to the picture. This also skews the rest of the colors somewhat, but it still manages to be attractive. Greens lean more towards the yellow spectrum, but they remain accurate for the most part and lively in the little vegetation seen around the city. Reds appear much deeper and more sanguine, making the Mars-like environment and waters of the fringe as though rivers of blood. Interestingly, blues remain unaltered, making the sky seem vibrant and animated while uniforms and Jeff Bridges's suits are darkly moody. Secondary colors are not affected much by the filmmakers' intentions, delivering some much needed life and making flesh tones appear appropriate to the climate. Contrast and brightness are very well-balanced and spot-on, delivering a comfortably bright presentation with superb visibility in the far distance while rich, full-bodied blacks provide the image with dimensionality and a cinematic appeal.

Presented in a 2.40:1 aspect ratio, the freshly-minted transfer is, unsurprisingly, razor-sharp and highly-detailed throughout, exposing the amount of time and effort that went into creating this dreary, barren wasteland. Every scratch, imperfection and pockmark on the collapsed buildings, concrete rubble and the metallic ships of the Bureau of Genetic Welfare are plainly visible, giving the movie and this manufactured dystopia a bit of personality and some sense of history. Individual pebbles, each grain of sand and the most minute debris that flies everywhere from explosions are distinct while the lettering on the hologram screens is discernible. The fabric and threading in the costumes are sharp and well-defined while facial complexions come with lifelike textures that display every wrinkle and negligible blemish in the faces of actors. The fine lines in hair and whatever surrounding foliage are razor-sharp, making for a very impressive and eye-catching high-def presentation.

The sci-fi sequel also goes AWOL with an excellent Dolby Atmos soundtrack, which defaults to a Dolby TrueHD 7.1 track for those not equipped for the new codec, making great use of the format but doesn't really reach the height of others. And by heights, I mean it quite literally.

For much of the movie's runtime, the overhead speakers are not given much of a workout, which is not to imply they are not used or don't impress a little from time to time. Admittedly, a handful of scenes come with subtle ambient noises that occupy the space above the listening area, but they are far and few in between. The best moments are, of course, during some of the action sequences, and this is especially true of the sequences with the Bureau's flying aircrafts, teasing viewers with various sounds that fluidly and convincingly pan from the front of the room to the back and overhead. But again, such impressive activity ranges from light and minimal to occasionally enveloping. A variety of discrete, well-placed effects take better advantage of the sides and rears, engulfing the listener with a few bits of exciting action. In spite of this little nitpicking — granted, much of it coming from personal taste and expectations — the design still offers a great deal of enjoyment for fans of the series.

However, the presentation leaves a much better impression in the front soundstage where imaging feels broad and spacious with lots of excellent panning effects. Many of those same action sequences utilize the front height channels to create a splendidly engaging half-dome wall of sound, engrossing viewers from beginning to end. Dynamic range and acoustics are sharply detailed and discrete, allowing for the tiniest clump of debris from explosions and the minute fragments of a wreckage to be distinctly heard flying across the screen. As with the previous movies, the low-end is plentiful and weighty, providing action sequences with a couple amusing wall-rattling thrills (bass chart). Dialogue is precise and well-prioritized above the ruckus and mayhem. Although the Atmos track doesn't quite live up to its predecessors, the lossless mix is nonetheless exciting and wildly entertaining.

'Allegiant,' the third installment in the 'Divergent' franchise, arrives with just as much perplexing absurdity as its previous two entries, in spite of the filmmakers making the attempt to answer some of the problematic aspects of the plot's original premise. Director Robert Schwentke returns to helm this sci-fi post-apocalyptic vision with some moderately feeble success, injecting it with better and more engaging action sequences, but the end result is still a sluggish trek through nonsensical pseudoscience that abruptly stops halfway through. The Blu-ray arrives with an excellent and highly enjoyable audio and video presentation that on some small level makes up for a frankly terrible movie. Supplements are surprisingly lacking but the few available are thankfully interesting looks at the production, making the overall package a decent rental for the curious but worth the purchase for the most allegiant fans.