Writer/director Jeff Nichols proves again that he is one of the most compelling storytellers of our time with the sci-fi thriller “Midnight Special.” A provocative, genre-defying film as supernatural as it is intimately human, “Midnight Special” follows a father, Roy (Michael Shannon), who goes on the run to protect his young son, Alton (Jaeden Lieberher), a boy with mysterious powers that even Roy himself cannot comprehend.

What starts as a race from religious extremists and local law enforcement quickly escalates to a nationwide manhunt involving the highest levels of the Federal Government. Risking everything, Roy is committed to helping Alton reach his ultimate purpose, whatever that might be and whatever it costs, in a story that takes audiences on a perilous journey from Texas to the Florida coast, while exploring the bonds of love and trust, and the nature of faith.

When you have hundreds of films reaching theater screens every year and streaming services competing for your attention with top-quality original product, the content that reaches our eyes has been pretty damn impressive of late. That said, there seems to be an overriding sense of familiarity to a lot of it. Even through various genres, it can start to feel like you're seeing a different version of something that's already passed by and holds few new surprises. Then a film comes along like Jeff Nichols' 'Midnight Special.' Perhaps best described as an ode to Steven Spielberg and John Carpenter films of the 1980s, this film is a science fiction jigsaw puzzle that puts itself together at a slow and deliberate pace. Where this film goes may not be entirely original, its impressive cast and smart story keep this film feeling new and exciting for the entire journey.

An Amber Alert has just gone out all over the country looking for a small boy named Alton (Jaeden Lieberher). A man named Roy (Michael Shannon) has taken him from a small Texas ranch lead by a religious cult leader Calvin Meyer (Sam Shepard). It turns out that this cult has been under investigation by the FBI, the NSA, as well as ATF for numerous reasons, but the primary one of concern is that Calvin Meyer has been disseminating government secrets in his sermons. These are the secrets no one should be able to access, and yet, they're found in this man's antigovernment religious ramblings. At the heart of it is young Alton. This small boy is no ordinary child and the man that has taken him is no ordinary stranger. While the local press and cable news have been lead to believe the child has been kidnapped, it's actually a rescue.

Roy along with his best friend from childhood Lucas (Joel Edgerton) have the child and are driving by night to an unknown destination. They don't exactly know where they're going, but Alton does, and that is all that matters. Alton is not a normal child. Through a blinding bright light, he can give those around him a vision, a vision of something so beautiful and wonderful, people are willing to blindly worship him as a deity. Because of this, the cult has come to worship him. Because he's also able to intercept top secret sensitive information, the government needs agents lead by NSA Agent Sevier (Adam Driver) needs Alton to answer some very important questions. Questions like how and why he can intercept this information or how a small child can down an expensive, highly sophisticated spy satellite.

With the help of Alton's mother Sarah (Kirsten Dunst), Roy and Lucas will make a mad run for their unknown random destination. Because government hunting them as well as a pair of men from the cult under orders from Calvin Meyer to retrieve the boy, Roy, Sarah, and Lucas will risk everything to protect the child and ensure Alton reaches his destination. What happens after that is anyone's guess as no one knows what to expect when Alton finds what he's after. 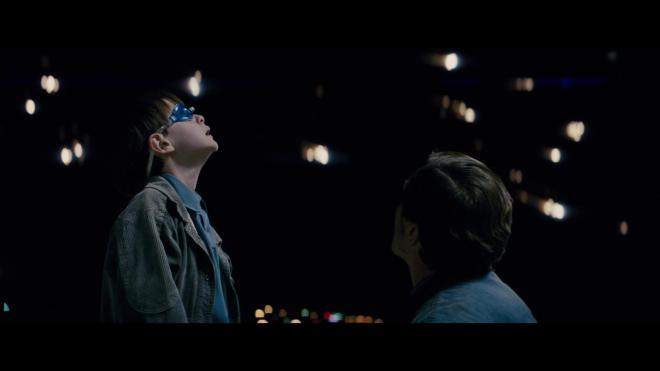 It's exciting to see a great new talent not end up becoming a flash in the pan. After 'Mud,' 'Take Shelter,' writer and director Jeff Nichols proves he's a talent with a lot to offer. As with 'Mud' and 'Take Shelter' before it, 'Midnight Special' toys with a number of heavy themes. Divinity, faith, government overreach, destiny, and most prominently the meaning of family are all explored in some way throughout this film. You have the cultists who believe Alton is their savior and they are willing to do anything to get him back if it means their souls are saved. This film touches on the role of government and its relationship with its citizens when they orchestrate a manhunt that bends any number of rights protected under the constitution to get answers to their questions. That said, nothing is as dynamic or as relatable as the relationships between Alton, his father Ray, his mother Sarah, and Lucas. It's difficult to speak to these themes and ideas at any length without spoiling a number of plot points, but with that in mind, I will say that it is refreshing to see a science fiction film that is this densely layered.

What works incredibly well for this film is its cast. Michael Shannon once again proves that he and Jeff Nichols are a dynamic creative force. Shannon delivers one of his most passionate yet restrained performances as Ray, a father faced with the potential of forever losing his son, even if that means doing the right thing. Joel Edgerton is wonderful as Lucas, who in any other world would have been equal to Ray's own flesh and blood. Kirsten Dunst does a fine job as Sarah, a mother who lost her son years ago and only has so much time to reconnect with him. Last but not least I come to Jaeden Lieberher as Alton. This kid is an impressive young actor who brings a lot of dramatic weight and dimension to a character that is far wiser than his years suggest.

As a film that borrows various elements from films like 'Starman,' 'Close Encounters of the Third Kind,' with some similarities to various episodes of 'The X-Files,' Midnight Special' is an incredibly good film. The only thing that holds 'Midnight Special' is an ending that is unfortunately restricted by a small production budget. To put it simply, there just wasn't enough coin in the coffers for Nichols to fully realize his vision. I'm being purposefully cryptic here because so much of this final moment hinges on this idea of alternate worlds intersecting and briefly coexisting. The budget just can't quite pull off the visual punch necessary here, but it tries, and for the most part it gets the job done. Some will quibble about these last few moments, but for me, it's the film's final shot that has more impactful potential than the big reveal. In short, 'Midnight Special,' although imperfect, is an impressive undertaking and stands as a great work of science fiction.

'Midnight Special' arrives on Blu-ray courtesy of Warner Brothers. Pressed onto a BD50 disc, the disc comes housed in an eco-friendly case. An Ultraviolet Digital Copy voucher is also included inside the case. The disc opens up to a trailer for 'Batman V. Superman: Dawn of Justice' before arriving at a static image main menu with traditional navigation options.

Shot on film, this 2.40:1 1080p transfer provided for 'Midnight Special' looks fantastic. For various plot reasons, a large portion of the film takes place at night or in extremely dim and dark indoor conditions. Thankfully, this transfer is able to handle these dark moments masterfully as the sense of detail and dimension is never lost. Black levels are rich and inky when appropriate and the film has a notable sense of three-dimensional depth to it. Film grain retains its presence throughout but is never noisy looking and provides the image with a well detailed cinematic look and feel. During the daylight sequences, the colors are bright and bold favoring summer earth tones. Blues play a big role throughout the film and that primary has a particular pop and presence to it. Only a brief instance or two of banding is the only negative I can speak to about this great looking transfer.

The English DTS-HD MA 5.1 track provided for 'Midnight Special' is an absolute beast of an audio track. So much of the film plays like a calm, quiet, and sustained thriller hinging on turns of phrases in the dialogue that it becomes easy to forget you're watching a science fiction film. But when those moments kick in, get ready for your subwoofer to make its presence known. The LFE on this track is fantastic! I felt like my whole apartment was shaking and it was glorious. I only adjusted my levels because of my neighbors, but if I had lived in a single residency building, I think I would have cranked the volume up higher just to get the full effect. Dialogue is crisp and clear, it can be on the soft side at times but the mix is well balanced and you shouldn't need to fiddle with levels - unless you want to for previously mentioned reasons. Sound effects, background atmospherics provide a notable sense of dimension to any given scene. The beautiful score by Dave Wingo also works to round out the track and as the film progresses becomes more and more pronounced keeping those lower registers active. All around this is a beautiful mix.

Origins: (HD 12:36) This is a collection of character segments about Roy, Lucas, Sarah, Alton, and Sevier featuring interviews from the cast and crew. Better than average for an EPK style feature, but it is very slim and there isn't much in the way of deep material to be found here.

The Unseen World: (HD 5:12) This is an incredibly interesting little extra feature that delves into Nichols' inspiration for this world. It's very brief and it could easily been a longer bonus feature. Don't watch until after you've seen the movie all the way through!

'Midnight Special' is a fantastic throwback science fiction drama that feels fresh and exciting. While undoubtedly a science fiction film, it's a densely layered story with a number of thematic elements in play. While the big final reveal may not quite live up to expectations that it builds towards, it doesn't take long to remember that isn't the point and that the relationships between the characters are all that matters. Warner Brothers brings 'Midnight Special' to Blu-ray with a terrific A/V presentation. Extra features are unfortunately incredibly sparse or a movie of this kind and fans of the film are likely to be disappointed by this lack of extras. 'Midnight Special' is recommended.

Sale Price 8.98
List Price 19.98
Buy Now
3rd Party 8.75
In Stock.
See what people are saying about this story or others
See Comments in Forum
Previous Next
Pre-Orders
Tomorrow's latest releases