A seemingly rehabilitated Norman Bates is drawn to a late night radio show where the host encourages him to share his views on the topic of matricide - the murder of a mother by her own child. Reliving his childhood, Norman recounts his trials as a young boy living with his widowed schizophrenic mother. These haunting memories are more than just disturbing visions of the past; they threaten to rekindle his killing urge in this spine-tingling thriller.

Count me among the throng of 'Psycho' fanatics who wish greedy industry executives had left Alfred Hitchcock's classic alone. Although schizophrenic serial killer Norman Bates is an undeniably fascinating character, we didn't need to catch up with him 20-odd years after he slaughtered Marion Crane in the shower, and we certainly didn't need to see Marion's heroic sister Lila meet an even grislier fate in the infamous fruit cellar of the creepy Bates home. (That image continues to haunt me and all but ruins the original film for me whenever I watch it.) Some might classify the first 'Psycho' sequel as a fun, twisty curio, but the second one drags the film's good name into the muck, embracing slasher clichés and further cheapening the tale's "hero."

So by the time 'Psycho IV: The Beginning' hit the airwaves in 1990 (it didn't even merit a big-screen release in the U.S.), I had become so disgusted with the franchise I boycotted the film. (The fact that 'Psycho' even became a "franchise" still makes my blood boil.) The premise, however - looking back at the events of Norman's tortured youth that sowed the seeds of mental illness and inspired the traumatic and life-altering murder of his monstrous mother - intrigued me, but I resolutely kept my curiosity in check...until now. After reviewing the other three 'Psycho' Blu-ray discs, I couldn't bare to relinquish my rights to the fourth installment, so after 26 years, I finally gave in and watched 'Psycho IV.'

And I'm glad I did. Not because it's a particularly great movie (it isn't), but because it provides some much-needed closure for the series and brings us back to the core relationship that fuels the original. Like the other sequels, 'Psycho IV' has its moments. The character of Norman, still played with earnest reverence by the lanky Anthony Perkins, is so morbidly captivating, he keeps us involved in the film, even when the plot goes off the deep end. Despite his horrific deeds, we care about the guy and root for him to vanquish his dogged demons. We also root for the young Norman, even though we know his fate is predetermined. Yet watching him evolve - and finally seeing his mother in the flesh - adds an extra element of intrigue and some much-needed freshness to a tale that had certainly run its course. It's just too bad the story doesn't quite meet the high standards to which it should have aspired.

And that's a shame, because Joseph Stefano, the man who penned the original 'Psycho' screenplay (and also decried the two sequels), wrote the 'Psycho IV' script. Sadly, it doesn't live up to his previous effort (by a long shot), but it does treat the characters with respect and remain true to them. On the plus side, Stefano fashions a clever dual scenario - one in the present, one in the past - and the two halves seamlessly overlap and intertwine. Elements of both, however, falter at inopportune moments, and the resulting cheesiness diminishes the impact and shock value of what should be a consistently provocative yarn.

When we meet Norman this time around, he's living in an upscale suburban community and listening to a radio call-in show that explores sensational issues. The topic that night is - what else? - matricide, and while host Fran Ambrose (C C H Pounder) interviews a confessed mother killer in the studio, an agitated Norman uses the pseudonym Ed and phones in. "Ed" says he, too, has killed his mother and is preparing to kill again, an admission that instantly piques Fran's interest and disturbs her. Fran keeps Ed on the line, hoping to diffuse the situation and uncover the reason behind his latest violent urge, but she gets more than she bargains for when Ed opens up and begins recounting his troubled childhood and the devastating effect his unbalanced mother had upon him.

The flashbacks, which comprise the bulk of the film, are the most interesting aspect of 'Psycho IV,' and that's largely due to Henry Thomas' spot-on portrayal of the insecure, repressed, and ceaselessly manipulated young Norman. Though his build and demeanor eerily resemble Perkins, his gamut of reactions really nail the character. As we witness Norman navigate the minefield of his mother's mercurial moods and bizarre demands, all while trying to deal with his burgeoning sexuality and diminishing sense of self, Thomas' face betrays the confusion, torture, anger, and resentment that churn inside him. Olivia Hussey as the conflicted, mentally unbalanced Norma Bates also nicely realizes a woman we've only previously known as a corpse. She's sweet and loving one moment and a demanding, denigrating bitch the next, and the ever dutiful Norman caters to her every whim, even when she orders him to crawl into bed with her when he's practically naked and comfort her during a storm.

Such scenes only skirt the surface of Norman's sick relationship with his mother and we need more of them to truly understand his deranged mind and unhealthy attachment to her. If only 'Psycho IV' had exercised some restraint and more fully developed the underlying emotions and manipulations that fuel the flashbacks, and then allowed those flashbacks to methodically crescendo to Norman's climactic act of matricide, instead of continually jumping forward to depict Norman's interactions with women after his mother's death. Such a tack would result in a far different and less violent film, but it also would make 'Psycho IV' more nuanced, complex, and psychologically compelling. Sadly, though, 'Psycho' films require a body count, so Stefano peppers the plot with a few obligatory side murders that diffuse the focus and cheapen the movie. I easily could have done without them (how many times do we need to see a ditzy, horny woman killed?), but at least the attacks aren't as exploitative as those in 'Psycho III,' even if the scares are more tepid.

Ultimately, 'Psycho IV: The Beginning' does its job, as it both depicts the genesis of one of Hollywood's great horror tales and also neatly wraps it up, providing a satisfying ending that should please most fans. It bookends the other films fairly well and, for the most part, respects Hitchcock's original vision. It's entertaining and appropriately creepy, but it's certainly nothing special. I'm glad I finally saw it, but I'd still be so much happier if 'Psycho IV' and the other 'Psycho' sequels would simply vanish into the ether. And so, probably, would Hitchcock. 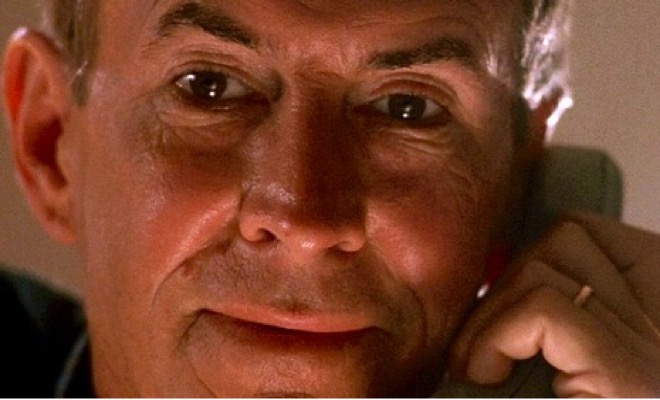 'Psycho IV: The Beginning' arrives on Blu-ray packaged in a standard case. Video codec is 1080p/AVC MPEG 4 and audio is DTS-HD Master Audio 2.0. Once the disc is inserted into the player, the static menu with music immediately pops up; no previews or promos precede it.

Though 'Psycho IV: The Beginning' was released as a made-for-cable movie in the U.S., it did play theatrically overseas, and it's that widescreen edition that's included on this Blu-ray release. The 1080p/AVC MPEG-4 transfer boasts a high degree of detail, superior contrast, excellent clarity, and a bold color palette, all of which maximize the impact of this grisly tale. Faint grain maintains a film-like feel (although levels do fluctuate at times) and only a couple of errant nicks dot the pristine source material. Blacks are rich and inky, primaries appropriately pop, and flesh tones appear natural and true. Close-ups abound, and all exude a terrific sharpness that draws us into the twisted minds of the characters. Like most 'Psycho' films, much of the narrative transpires at night, but solid shadow delineation keeps the image well defined, with only minimal instances of crush creeping into the picture. No noise, banding, or other digital annoyances are present, and any enhancements escape notice. Visually, this final 'Psycho' installment ranks right up there with its predecessors, and Scream Factory has done a stellar job with its Blu-ray rendering.

'Psycho IV: The Beginning' is the only 'Psycho' sequel to fully embrace Bernard Herrmann's original score, and this DTS-HD Master Audio 2.0 track celebrates it to the max. Excellent fidelity and tonal depth allow the classic music to fill the room with ease, despite the lack of multi-channel augmentation, and a wide dynamic scale handles all the screechy strings and weighty bass accents with ease. Subtleties, such as creaky wood floors and the sound of the knife piercing various objects, are crisp and distinct, and all the dialogue is clear and easy to comprehend. No distortion is present, and no age-related defects crop up either. Considering its humble roots, this track is quite lively and more than complements the suspenseful material.

A couple of new supplements enhance the appeal of this Blu-ray release.

'Psycho' never needed one sequel, let alone three, but at least 'Psycho IV: The Beginning' addresses the issues that most intrigue diehard fans of the franchise - namely, Norman's bizarre relationship with his mother and the events that lead him to commit the crime that splintered his personality. Though it occasionally embraces cheap and gratuitous horror movie clichés and features a way-over-the-top finale, the last chapter of the 'Psycho' saga has more relevance than its sister sequels and features earnest performances from Anthony Perkins, Olivia Hussey, Henry Thomas, and C C H Pounder. Solid video and audio transfers, as well as a nice supplemental package, enhance Scream Factory's Blu-ray presentation, which will certainly thrill 'Psycho' completists. Yet for the casual fan - and morbidly curious - this grisly tale of twisted relationships and brutal murders is merely worth a look.

Sale Price 12.99
List Price 14.99
Buy Now
3rd Party 16.2
In Stock.
See what people are saying about this story or others
See Comments in Forum
Previous Next
Pre-Orders
Tomorrow's latest releases