In 18th century France, Lt. Andre Duvalier (three-time Academy Award-winner Jack Nicholson, The Departed, As Good As It Gets, A Few Good Men, The Shining), an officer in Napoleon’s army, has been separated from his regiment. Wandering near the coast, he spies a young woman (Sandra Knight, Frankenstein’s Daughter, Blood Bath) and calls out to her. When she fails to acknowledge, he follows her into the dark surf and strangely loses consciousness.

He awakens in a house tended by an old woman, Katrina (Dorothy Neumann, Sorry, Wrong Number, The Ten Commandments), who claims not to know the mysterious lady. On his way once again, Andre comes upon the castle of Baron Victor Frederick Von Leppe (Boris Karloff, Frankenstein, The Mummy, How the Grinch Stole Christmas).

There he learns that the girl is in fact the spirit of the Baron’s late wife, being used as a pawn by the witchy Katrina who is bent on driving the elderly Baron to suicide.

Also starring Dick Miller (A Bucket of Blood) as Stefan, married in real-life to Knight (who portrays the ghost of Ilsa, the Baroness Von Leppe), who was visibly pregnant with their daughter during filming.

Much like the soundstage and the set design on which this movie was shot, 'The Terror' is really nothing more than a thematic grab bag taken from popular horror features of the early 1960s. Even a good chunk of the camerawork was done by a few in the production team and pieced together later in the editing room. Although Roger Corman takes full credit as director, several sequences were shot separately by the likes of Francis Ford Coppola, Jack Hill, and Jack Nicholson, each of whom didn't earn a title card next to Corman's but kept their respective credits as producer, writer and actor. This is partly the reason it's still remembered, because it's so surprising the film turned out as a relatively coherent whole.

Story goes that cinematic legend Boris Karloff still had a few days left on his contract with American International Pictures, so Corman took advantage by making 'The Terror' in less than a week. Corman had also just finished shooting 'The Haunted Palace' with Vincent Price and Lon Chaney Jr., so the timing was very convenient, hiring Leo Gordon and Jack Hill to write a script based around the available set. The results were a story that seems ripped right out of the imagination of Edgar Allan Poe, down to the restless soul of a deceased wife (Sandra Knight), a wealthy grieving husband (Karloff), a strapping youth of honor (Jack Nicholson) who solves the mystery, and even the turn-of-the-century setting.

Coincidentally, Corman was already making a name for himself adapting Poe's work into matinee-priced movies, most of which starred horror idol Vincent Price. 'The Terror' is standard B-quality horror, and one which the "king of low-budget features" was very familiar with. The film is ripe with a creepy atmosphere and a Halloween aesthetic that's amusingly charming, thanks to the work of Daniel Haller and cinematographer John Nicholaus. The movie funnily comes across like a hackneyed checklist of the supposed macabre and sinister. We have eerie stone castles covered in cobwebs, voices and apparitions coming from a nearby cemetery and a gypsy witch (Dorothy Neumann) living alone in the woods. Sure, it's still kind of cool to watch, but humorously trite nonetheless. 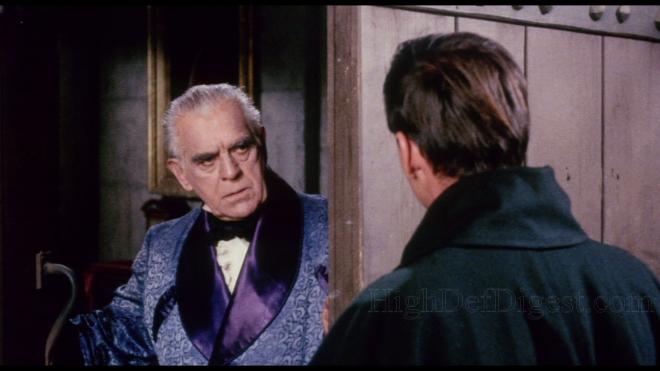 The other notable aspect of 'The Terror,' aside from the presence of Karloff and Corman's hurried cheapness, is the film being one of Nicholson's earliest acting roles as a leading man. Still six years shy of his big-break performance in 'Easy Rider,' the three-time Oscar-winning icon was at this time a struggling B-movie actor and made it big thanks to Corman's eye for talent. Who'd a thought working with Corman would lead to future Hollywood stardom? Actually, scratch that. A quick Google search will easily answer that query when names like James Cameron, Akira Kurosawa, Martin Scorsese, Francis Ford Coppola, Ingmar Bergman, Robert De Niro, Peter Fonda, Ron Howard, Jonathan Demme, Dennis Hopper, Federico Fellini, and Nicolas Roeg suddenly pop up alongside his.

But anyhow, back on topic. In spite of the mawkish dialogue and a plot impersonating Poe's fiction, Nicholson pulls off a generally good performance, outdoing even the great but melodramatic Karloff in several scenes. Dick Miller ('Gremlins') also adds a bit of weight as the Baron's butler, Stefan, and provides convenient exposition at critical moments. In the end, Roger Corman's 'The Terror' is a fun mix of colorful B-grade horror made on the spur of the moment, but not much else. It doesn't offer any spine-tingling chills or thrills, but it has moments of cool Halloween visuals. It's the sort of material aired late at night when no one was watching, like 'Elvira's Movie Macabre.' Oh, wait. She already did that during the show's first season revival.

The Film Detective brings 'The Terror' to Blu-ray on a Region A locked, BD25 disc housed inside the standard blue case. At startup, viewers are taken to a static menu screen with music.

The Corman-Coppola-Nicholson-Hill collaboration sadly haunts Blu-ray with a strong yet subpar 1080p/AVC MPEG-4 encode. However, this high-transfer is an improvement over the 2011 release, which according to producers at The Film Detective was made from the best available 35mm elements. It's not a massive, night and day difference, but it nonetheless offers an appreciable improvement, showing better fine details around the baron's creepy castle and the spooky cemetery. Facial complexions reveal pores and wrinkles during several sequences, and costumes come with visible texture in the fabric. Unfortunately, a majority of the presentation is quite soft and blurry with many scenes of poor resolution and small instances of white specks. The source has not aged well, but the video is quite nice with a thick, consistent grain structure that's natural, giving it an attractive film-like quality.

Contrast and brightness are also better balanced, displaying clean, crisp whites that occasionally make the video pop. Black levels are generally deep and accurate, but in many scenes, they come off much too strong, almost to the point of crush, and shadows tend to obscure the finer aspects. Colors benefit the most with a nice array of vivid blues, greens and reds while soft pastel hues are rendered boldly, adding to the film's eerie atmosphere.

Like the video , the film's audio is also a small improvement over its predecessor, arriving with a DTS-HD MA mono soundtrack. However, the mix shows its age with several instances of noise and very light pops in the background while the loudest segments are much too bright and expose distortion. Discrete effects are clear and intelligible, generating a nice sense of space and keeping things engaging, but then again, the mid-range isn't particularly dynamic, coming off noticeably flat and uniform for the most part. Although not very extensive, details thankfully remain clean while the score enjoys plenty of appreciable definition. Best of all, the low-end is quite impressive and responsive without seeming artificial or forced, providing the lossless mix with presence and weight. Topping things off, vocals are very well-prioritized and distinct in the center, making for a nice track.

Roger Corman's 'The Terror' is best remembered for being filmed on recycled sets, using recycled plot elements, and featuring an early performance by a very young Jack Nicholson. The B-horror feature delivers the sort of matinee campiness we'd expect from a hurried, low-budget production, and it remains amusing precisely because of that fact. The Blu-ray from The Film Detective is a welcomed improvement from the overly-digitized mess of 2011, offering an improved audio and video presentation. Although arriving as a barebones release, the overall package will ultimately attract the devoted, hardcore collectors of the genre and the director.

Sale Price 31.98
Buy Now
3rd Party 31.98
In Stock.
See what people are saying about this story or others
See Comments in Forum
Previous Next
Pre-Orders
Tomorrow's latest releases