Hello, My Name Is Doris

After a lifetime of being overlooked and ignored, Doris (Sally Field) finds her world turned upside down by a handsome new coworker (Max Greenfield) and a self-help guru that inspires her to take a chance on love. Hello, My Name Is Doris is a witty and compassionate late-life coming-of-age story that will make you cheer and want to say, "I'm Possible!"

The late-life adolescence film is practically a genre unto itself these days. Find an aging male or female actress, preferably someone who won an oscar decades ago, put them in a film where they have to associate with someone who is generations younger than them, and watch what happens. Sometimes these movies are comedies as with Robert De Niro's round in 'The Intern.' Others fall more in line of dramatic thrillers as with Judi Dench's creepy portrayal of Barbara in 2009's 'Notes on a Scandal.' One film is a comedy, the other a thriller, but the formula is the same relatively speaking. Michael Showalter's 2015 drama/comedy 'Hello, My Name is Doris' doesn't stray far from the formula but an impressive performance from Sally Field keeps the film from sinking into becoming a predictable cliche.

Doris (Sally Field) has lived a very sheltered life with the predictable routine of going to work, coming home each day, and caring for her dementia-riddled mother. She lived like this for the better part of 40 years while her brother Todd (Stephen Root) was able to start a business, have a family, and live his own life. Doris isn't without her own set of friends, she has Roz (Tyne Daly) who keeps Doris active by going to self-help seminars for the free food. Now that her mother has passed away, she's suddenly free to live her own life. During a chance encounter in an elevator on her way to work, Doris meets the new guy at the office, the handsome and much younger John (Max Greenfield). Because of their precarious position in the elevator, John happens to be the first person to really take notice of Doris.

Because of this chance encounter, Doris develops a school-girl crush on this young man. With the help of Roz's daughter, Doris starts cyber stalking him. Learning about his favorite movies, what music he likes, and starts to reshape her life to hopefully become more attractive to John. As Doris starts to integrate herself into John's life, her family and friends start to worry about her. What started out as an innocent infatuation becomes serious when Doris purposefully ruins John's relationship with his girlfriend Brooklyn (Beth Behrs). As Doris takes stock of her life and realizes how she's always wanted to live, it may be too late to pick up the pieces of her shattered life, make peace with John, and live the life of adventure and excitement she's always wanted to have. 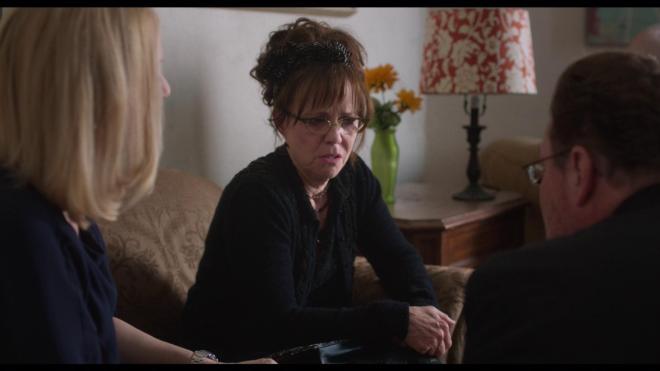 Loading up this Blu-ray release of 'Hello, My Name Is Dorris,' I was greeted with trailers for 'Grandma' starring Lily Tomlin as well as a trailer for 'The Meddler' starring Susan Sarandon. I mention these trailers because to some degree, they're virtually the same story as was featured in 'Hello, My Name Is Doris' and star extremely talented aging actresses rediscovering their youth and vitality through the younger people in their lives. While there are subtle plot differences, the stories are essentially the same. It's difficult not to become a little jaded when faced with a movie like 'Hello, My Name Is Doris.' Is this type of film the only material open to extremely talented actresses over 60 these days? While 'Hello, My Name Is Doris' and 'Grandma' are wonderful films (I haven't seen 'The Meddler' yet), it's an unfortunate pattern to notice when these are women who should be featured in more weighty and important roles than these.

With that little bit of soapboxing out of the way, I will now go on to say that 'Hello, My Name Is Doris' is a sweet-natured and wonderful dramatic comedy. As with most films featuring the actress, Sally Field steals the show in every scene she's in. Her Doris is earnest, sweet, and most importantly relatable because who out there can honestly say they've never had a crush sweep up every emotion and motivate you to do some pretty questionable things? Love, even if it's the perception of love and not the real thing, is a powerful feeling and clouds better judgment. It can also inspire you to take charge of your life and make some real changes for the better. That's the incredibly awkward and humorous journey Sally Field's Doris goes on with this film. Sure, she may be in her 60s, but even if you're 16 it's easy to empathize with her character.

Director and co-writer Michael Showalter and co-writer Laura Terruso do a fantastic job of keeping Doris relatable and making John played by Max Greenfield an easily likable and also slightly awkward character. Sure, there is an age difference but if there had been a different aligning of fates, it's very easy to see how the two could have possibly met and fallen for each other. Where 'Hello, My Name Is Doris' gets things right with this material is that it fully explores the ideas surrounding friendship without romance. It's an easily relatable story in that context. When friends are that close it's natural for there to be a curiosity about romantic possibilities. Whether or not that romance can flourish is another question altogether and 'Hello, My Name Is Doris' wisely sidesteps any definitive statement on that issue. It's too complicated to be reduced to platitudes and this film is richer for not pretending it has all the answers.

As wonderful as 'Hello, My Name Is Doris' is, it isn't without its faults. As Doris and John's characters are fully fleshed out, Todd played by Stephen Root, his wife Cynthia played by Wendi McLendon-Covey, and her psychiatrist played by Elizabeth Reaser feel tacked on to the proceedings. They come and go at strange times throughout the film and really don't play too important of roles considering the presence of Tyne Daly's character of Roz was already established as an anchor point for Doris. Roz is the one with the most to lose from Doris' character changes and that strain on their friendship could have been explored more effectively.

At the end of the day, 'Hello, My Name Is Doris' is a perfectly wonderful and entertaining film. Even though she never needed to, Sally Field proves yet again she's a formidable talent and a cinematic resource that shouldn't be squandered by bit parts in bad super hero movies. The story may be a bit familiar and predictable, but that doesn't mean it's a film that should be avoided. It has a tender and honest heart that feels lacking in a number of modern films released these days.

Presented with a 1.85:1 1080p transfer, this digitally sourced transfer is pretty fantastic. Details are sharp and clear allowing the viewer to soak in all of Doris' little character quirks from the way she dresses to the hoarder lifestyle she lives in her mother's home are on display. While digitally sourced, the image has a nice, subtle film-like quality to it that doesn't look too "video soft" or artificial looking. Colors are bright and bold, especially primaries yellows, reds, and blues. During the concert sequence, colors skew bright neons and purples and the image remains stable without losing details or depth. Black levels are rich and inky allowing for a nice sense of three-dimensional depth to the image. Contrast is under control without any blooming. The image is also free of any sort of compression artifacts. All around a very good looking film.

'Hello, My Name Is Doris' arrives with a pleasing and present English DTS-HD MA 5.1 audio track. This is a dialogue-driven film and voices keep to the front/center channels allowing sound effects, atmospherics, and the nice score by Brian H. Kim to work out the surround channels. Because this is more comedy/drama, there isn't a whole lot of surround activity aside from the concert sequence and a few party scenes. Imaging is present, but again it is very subtle, but it works for this sort of film. Free of any artifacts, levels are even without any need for volume adjustment. A very good audio mix for a relatively quiet and contemplative dramatic comedy.

Audio Commentary: Director and Co-writer Michael Showalter flies solo for this track. Even on his own, he does a solid job of explaining the genesis of the film, casting, working with the actors, and shooting L.A. for New York in order to keep the budget down.

Deleted/Extended Scenes: (HD 25:05) Aside from an alternate opening sequence, there really isn't anything earth-shatteringly amazing here. The scenes are well acted or have a little extra line of resonant material, but aren't really necessary and it's easy to see why they were cut.

While I hope to see Sally Field get some more dynamic roles in the near future, her turn here in 'Hello, My Name Is Doris' is splendid and helps make for a humorous and heartwarming dramatic comedy. Sony Pictures Home Entertainment brings the film to Blu-ray in fine order with a fantastic A/V presentation. Extras are a little slim but the audio commentary is worth the listen. At the end of the day 'Hello, My Name Is Doris' is a perfectly nice little movie that should entertain most people out there. Recommended.