rom Garry Marshall, the director of Pretty Woman and Valentine’s Day, comes MOTHER’S DAY, an all-star comedy that celebrates parenthood and family.  The star-studded ensemble film follows three separate-but-connected families and explores the many types of relationships among children and their mothers.  It’s a comedy that will make you laugh, cry and cheer! Also starring Shay Mitchell (“Pretty Little Liars”), Timothy Olyphant (“Justified,” Live Free or Die Hard), Britt Robertson (Tomorrowland, The Longest Ride) and Hector Elizondo (Pretty Woman, The Princess Diaries), MOTHER’S DAY tells a fun and relatable story that can be enjoyed by all generations, making it the perfect family night movie!

As someone who watches and reviews mass quantities of films, it can be incredibly difficult to not become a bit of film cynic. I have a genuine love and appreciation for all genres, and I'm usually willing to give just about any film a shot. Even dopey romantic comedies featuring "it" stars of the day and a sap-filled story loaded with cliches. Sometimes those movies can actually be rather entertaining and redeeming. Sadly, television and film icon Garry Marshall's final directorial effort 'Mother's Day' is about as vapid and irritatingly trite as it can get while featuring a talented cast of actors with paper-thin characters and predictable story arcs.

Usually, at this point, I would be recounting the story of 'Mother's Day' with a brief rundown of the plot to tease the stakes and build interest to the reader. Unfortunately, like Marshall's other ensemble vignette films 'Valentine's Day' and 'New Year's Eve,' pulling together a concise spoiler-free description of events is virtually impossible. All I can do is run down each story and list the actors involved as the threads of this film rarely connect well enough to create the warm and fuzzy cinematic sweater it desperately tries to knit together.

Jess (Kate Hudson) and her sister Gabi (Sarah Chalke) have a tense relationship with their rightwing Texan parents Earl (Robert Pine) and Flo (Margo Martindale). Jess is married to Russell (Aasif Mandvi), an Indian man Flo and Earl have no idea even exists, and Gabi is married to her lesbian partner Max (Cameron Esposito). Everything is going to come to a head when mom and dad decide to drive their Winnebago up to see the kids for a surprise Mother's Day visit! With that drama unfolding, Jess's friend Sandy (Jennifer Aniston) is having a crisis of her own. Sandy's amicable relationship with her ex-husband Henry (Timothy Olyphant) is turned upside down when Henry elopes with the much younger and super sexy Tina (Shay Mitchell) forcing them to reevaluate the custody of their two sons. Meanwhile, Miranda (Julia Roberts) has segued her popularity as a writer into hawking cheap jewelry on paid programming while her father-like manager Lance (Hector Elizondo) helps her deal with various day-to-day and personal crises, including the sudden appearance of Kristin (Britt Robertson), the daughter Miranda gave up for adoption when she was sixteen. Britt has her own issues because she can't commit to marrying her boyfriend, the struggling amateur comedian Zack (Jack Whitehall) who also happens to be the father of her daughter. On the other side of town, Brad (Jason Sudeikis) is mourning the death of his wife Dana (Jennifer Garner) as he struggles to raise his two daughters on his own. With the Mother's Day holiday on the horizon, everyone will be confronted with their own personal drama and have to find a way to set everything aside so they can all come together and live happily ever after. 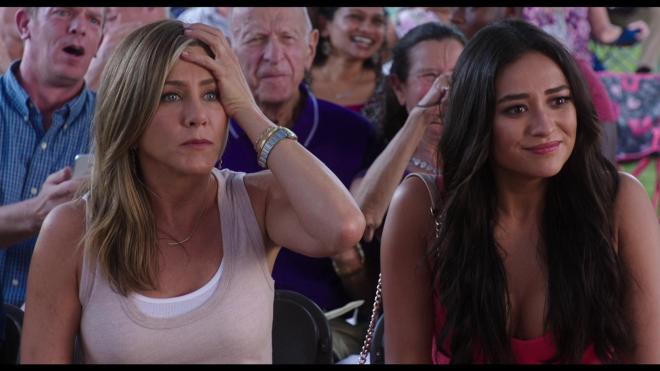 Pick any vignette story, any of the characters and their own personal unique little story, and you would certainly have enough material for a feature film unto itself. Like the other entries in Director Garry Marshall's unofficial "Holiday Trilogy," 'Mother's Day' is stuffed to the gills with entirely too much story and too many characters for anything to resonate on a personal level. Serious and earnest material like a father who can't move on because his wife died, or a mother who has to distract herself with a career to not feel the pain of giving up her daughter for adoption is completely shortchanged in this cookie cutter film. On top of shortchanging character and story, 'Mother's Day' is about as fake as it can get. While I understand the story choices are in place to tug at heartstrings, make you giggle a little, and make you swoon for an unlikely love story, everything in this film feels so trite and manufactured that it looks like the mechanical bird from David Lynch's 'Blue Velvet.' The film has a complete lack of genuine reality to it that it feels like something prefabricated on an assembly line.

It's tough to look at 'Mother's Day' without viewing it through the lens of Garry Marshall's final film. He died just two weeks before this film's home video release, and his death brings with it a bit of a sorrowful ambiance to it. So many famous faces, friends, and family members of Marshall's stock company of players make bittersweet appearances. Cameo appearances like Jennifer Garner or Larry Miller, for example, are more than a distraction from the story because their actual appearance isn't necessary to the film but instead feel like they're just doing the man favor. Almost as if everyone knew Marshall was about to pass away and wanted to drop by to say "hi" which then makes you wonder why Richard Gere or Anne Hathaway didn't pop out of the bushes someplace to do a little mugging for the camera. Toss in more than a few 'Pretty Woman' references, and 'Mother's Day' is sadly a rather paltry outing for the iconic Director who left an otherwise indelible mark on television and film over the years. I went in to 'Mother's Day' without any expectations, I just wanted some simple entertainment. 'Mother's Day' is just too simple, especially when it tries to tackle some dramatically weighty material during an incredibly long feeling two hours. If you were a fan of Marshall's work, it's probably best to stick to his earlier, better films. I will admit to being entertained by bits and pieces, but those few moments don't add up to a satisfying whole by the time the credits roll.

'Mother's Day' is brought to Blu-ray thanks to Universal Home Video and is pressed onto a BD50 disc. The disc opens with trailers for other Universal releases before arriving at a static image main menu featuring traditional navigation options. The disc is housed in a standard Blu-ray case with an identical slipcover and comes with a Digital HD voucher.

On the positive side of things, 'Mother's Day' is a very pretty looking movie. With a 1.85:1 1080p transfer, This digitally sourced image looks amazing - to a fault. Everything is so beautiful that it just points out how manufactured the movie is. From facial features to costumes to the production design to the individual blades of grass all come through with impeccable clarity. Colors are bright, vibrant and absolutely beautiful allowing for a rich amount of primary pop to bathe the screen. I imagine this film in 4K with HDR would look fantastic. Flesh tones are accurate and healthy as are black levels which provide plenty of three-dimensional depth to the image. Free of any banding or other compression issues, 'Mother's Day' is a damn good looking flick, even if it's far from the best movie ever made.

For a conversationally driven film, 'Mother's Day' enjoys a terrific English DTS-HD MA 5.1 audio track. Voices and dialogue are clearly heard throughout. The mix enjoys a lot of great atmospheric work as a number of scenes take place either outside or in open space buildings and you can hear the depth and distance in the sound effects. Scoring is light and the frequent pop songs are strong and present but don't overpower the mix. Where things can feel a bit off is when two characters are having a private conversation outside, as is what happens between Jennifer Anniston's Sandy and Timothy Olyphant's Henry, the mix suddenly can feel a bit flat, as if all of those wonderful background atmospherics decided it time to take five and grab a cup of coffee. It's not an intrusive or altogether distracting anomaly, but it's noticeable. But that is my only quibble with what is otherwise a fine audio track.

Gag Reel: (HD 9:48) The usual cut up material that tends to look and sound a bit too forced to be real.

Deleted Scenes: (HD 4:59) Nothing too incredible here, considering how brief each scene is, it doesn't add much to the characters or stories.

It's tough to say goodbye to a talented filmmaker and storyteller. Often you want to see them go out with a bang and let their final work be a showcase of their best efforts. Sadly, 'Mother's Day' is a meandering collection of Garry Marshall's worst tendencies. It may be pleasing for some, but if you want any depth or authenticity to what you're seeing, 'Mother's Day' is probably going to leave you wishing you had just turned on 'Overboard' or 'Pretty Woman' for the 100th time. Universal brings 'Mothers Day' to Blu-ray in fine form with a first-rate A/V presentation and with a sadly anemic assortment of bonus features. If you feel like you must see 'Mother's Day,' make sure you rent it first before giving it away as a present on the titular holiday.

Sale Price 8.63
List Price 19.98
Buy Now
3rd Party 2.22
In Stock.
See what people are saying about this story or others
See Comments in Forum
Previous Next
Pre-Orders
Tomorrow's latest releases