The manga: Mai-chan's Daily Life is an ero guro tank?bon manga released in Japan consisting of 11 chapters and an omake, written and illustrated by Waita Uziga. It was published by Sanwa Shuppan on April 21, 2004, and serialized in Ayla Deluxe magazine.

Every once in awhile, one is confronted with a film that simply has no point to it. It happens more often than one would assume, but sometimes these films can at least provide some frivolous diverting entertainment. Then there are movies that seem to have no point to them at all other than to play to the base drives of people. Whether these films are sexual fantasies come to life or mere gore celebrations, they can still be somewhat entertaining when they're done well, after all, an entire genre of Italian horror films and thrillers are dedicated to them. Unfortunately, Sato Sade's adaptation of the Uziga Waita manga 'Mai-Chan's Daily Life' is completely and utterly pointless, disgusting, and boring. Thankfully it's short.

Young Miyako (Akane Miyako) needs a job, fast. As she browses online for available positions that would alleviate her cash-strapped position, she stumbles upon a request for a new live-in maid. It turns out this is no ordinary maid position. the Master (Maruyama Shogo) and his wife Kaede (Roman Soako) have particular designs for their maids. Miyako quickly learns that her fellow live-in maid has a peculiar ability to heal from any wound, and that is a talent Kaede and the Master are very intent on exploiting in any number of sexually degrading and painfully violent ways they can think of. As things progress, Miyako is drawn into participating by inflicting Mai-Chan pain with any sort of terrible device at her disposal, night after night.

I'm going to get right to the thrust of the issue at hand, 'Mai-Chan's Daily Life' is just not a good movie. No matter how you slice it, it's obnoxious, insulting, and more to the point - more than a bit disgusting. As someone who has seen their fair share of Italian Giallo films, I'm not someone with a weak stomach or thin skin, so I was prepared for some pretty gnarly imagery. The problem is this film is so poorly put together that there is no point to the violence. That isn't to say all Giallo films are the greatest examples of filmmaking either, however, most of them do have a point to them. Giallo films tend to expound on the idea that people are capable of committing any atrocity or harmful act on another person if they don't have the fear of consequence. 'Mai-Chan' does play with that idea, but there is no hesitation on Miyako's part. She jumps all in without any character development or degradation. 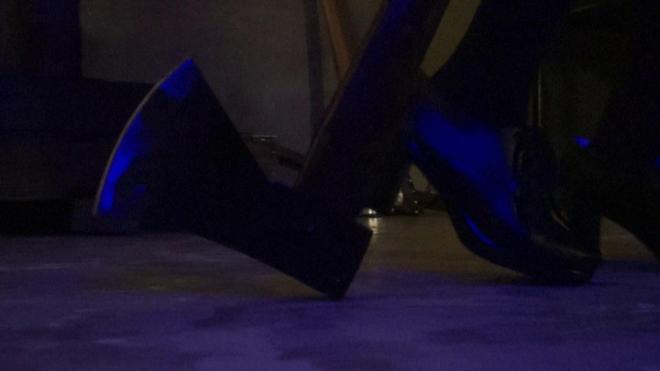 Admittedly, I'm not all too familiar with most of Sato Sade's work. From what I have seen, his films lead me to think of him as a low-rent Jess Franco. 'Mai-Chan' is no different. It's just a parade of torture, gore, nudity, and deification without any point. Gore hounds will likely be bored along with most other horror fans as the film quickly shows that it's completely pointless. Even calling this a horror film is a bit of a misnomer as there is nothing to be scared of. You don't care about these characters because there's no time spent trying building them up into anything beyond cartoons. In short, it's a boring film.

About the only thing that I can say in a positive way about this film is that it is mercifully short. At 63 minutes, it still feels long, but when those credits roll, it's a welcome relief. Perhaps more indicative about how haphazard the film is put together, that ending comes out of nowhere. There isn't any traditional build up in character, structure, or drama. The gore just starts, more things happen, and just when you think something resembling an actual plot is about to get rolling the film ends. I don't normally have such distaste for a particular style of film because I know each film has an audience. That said, I don't honestly know who this film would appeal to. It makes the 'Human Centipede' films appear brilliant and nuanced by comparison. I wouldn't necessarily tell anyone to never see a film, but 'Mai-Chan's Daily Life' is a bit of a game changer in that arena. Don't watch this movie if you're expecting anything resembling plot structure or characters. You won't find either here.

'Mai-Chan's Daily Life' arrives on Blu-ray courtesy of Redemption and Kino Lorber. Pressed onto a Region A BD25 disc, the disc opens directly to a static image main menu with traditional navigation options. The disc is housed in a standard Blu-ray case.

YouTube videos shot on first generation iPhones look better than any given scene presented in this 1.78:1 1080p transfer. While shot digitally, this image appears to have been filmed using extremely outdated commercial grade cameras. Honestly, this looks like the sort of video footage you would get from a mini-DV HD tape and then run through every filter and editing trick in iMovie. Every shot looks completely different from the last. Little to no effort was made to white balance the camera so light blooms can completely wipe out the image. Colors are all over the map either intentionally altered in post or just slapped on the screen without taking care to link the shots. Because of the cameras, motion blur is near constant making the film look soft and out of focus a lot of the time. Detail levels also come and go so even if you're just in it for the gore, all of the image processing and photography styles make it nearly impossible to enjoy the blood and guts. It's an ugly looking movie - intentional or otherwise.

Compounding the image woes is the rough and unfinished sounding Japanese LPCM 2.0 audio track. The dialogue throughout most of the film sounds as if it was recorded with whatever microphone was available and often without a boom mic. Characters in the background who are speaking are often inaudible. Thankfully there are English subtitles because otherwise this would be extremely difficult to understand what was being said. What little sound effects work was edited in are the usual canned gore sounds of squirts and squishes without any attempt to blend them into the scene or give them any sort of a natural quality to them. At the end of the day this is just as ugly and inconsistent as the image quality.

Waita's Daily Life: (HD 31:08) This is an odd sort of behind the scenes extra feature as there really is very little actual behind the scenes focus to it. We're just following the lead actress play around with the camera. Actually, this is better-looking footage than the main movie!  Otherwise, there really isn't anything to this odd 30 minutes of footage.

I understand there is a market for this sort of movie out there, but it's just not for me. I love horror movies, I can handle some pretty rough stuff, but this movie is just gross for grossness sake. There's no story development to make anything the audience sees worth the time. It tries to be shocking but it ends up being boring. Kino Lorber and Redemption brings this movie to Blu-ray with an odd, ineffective, and ugly A/V presentation and some exceedingly slim extra features. Since I can't feature who would want to see this movie, I'm left to say skip it entirely.