War veterans visit a lakeside cabin for a week of shooting, drinking, etc. but find the cabin being looked after by a young caretaker named David. When David's status as a war deserter is revealed, all hell breaks loose.

While films can provide a great amount of entertainment to the masses, they can also be a great tool to help people talk about cultural issues that are percolating at the moment. If there is a tough issue on the table with divisive points of view, a good movie can help articulate those points without hyperbole. Among many other issues the United States dealt with in the last thirty years, the fallout of the Vietnam war loomed large. Not only was it a prolonged conflict that cost the lives of thousands of soldiers and civilians, it caused generational divide lines. It's this rift that writer and director Burt Kennedy sought to explore with his thriller 'Wolf Lake.' Starring a show stopping Rod Steiger, this film is a smart mix of Sam Peckenpah's 'Straw Dogs' and David Morrell's original novel 'First Blood.'

It's 1980. Charlie (Rod Steiger), Wilbur (Jerry Hardin), George (Richard Herd), and Sweeny (Paul Mantee) are longtime war buddies. They fought together in the big one and every year they travel to the isolated Canadian hunting grounds surrounding Wolf Lake with their rifles to do a little drinking and hunt some game. This was just supposed to be another fun hunt for the guys, but it's not as they would have expected. When Charlie and his buddies show up, they learn that their usual guide is already on a hunt with another party and won't be back for a couple days. Instead there is the groundskeeper David (David Huffman) and his girlfriend Linda (Robin Mattson)  and they're there to take care of the hunting cabins and cook. This wouldn't normally be a problem, but David is a young American man. A young man of an age who should have been in Vietnam - so what's he doing up in Canada?

When Charlie finds out that David was in Vietnam but deserted, he can't hold back his rage. Charlie's own son died in combat, a hero's death. But here's David, alive and hiding out. Charlie can't let it go. As Wilbur tries his best to calm his friend, Charle sets about pitting is apathetic pals against David. When Charlie gets them rip-roaring drunk, he convinces the boys to go have a little "fun." After bursting into David and Linda's cabin, they hit David over the head knocking him out cold and Charlie pushes his pals into assaulting and raping Linda. When David comes to hours later, all out war begins. 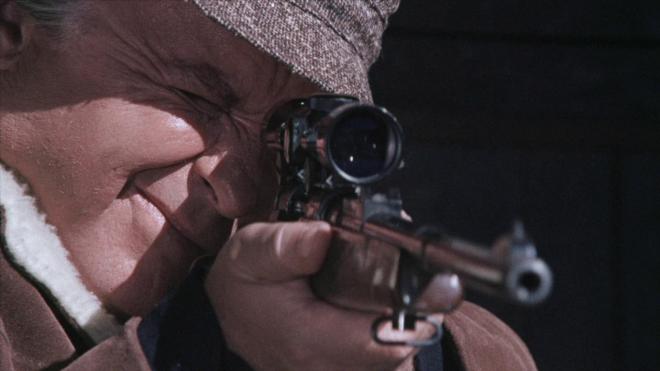 As a child of the 80s, I grew up in the aftermath of the Vietnam war. It loomed over the movies I consumed. If it wasn't a side plot of a movie, you could find the after effects of it in the cartoons of the era. Even the biggest action heroes of the day like Chuck Norris and Sylvester Stallone were refighting the war and winning it their way in explosive big budget action fantasies. The action movies and the thrillers of the late 70s and 80s felt like America's way of talking about the war. Films like John Frankenheimer's adaptation of 'Black Sunday' and John Flynn's 'Rolling Thunder' were pulpy conversation starters, but it was films like 'Wolf Lake' where the ball really got rolling. At its core, 'Wolf Lake' is a simple home invasion thriller, but the plot and character elements about Vietnam and the generation gap between veterans gives the film a sense of weight and status. It's certainly a pulpy, exploitation-style thriller, but it uses it makes smart use of its themes without shirking the responsibility of what the film is trying to say.

Burt Kennedy lets the drama and the the tension simmer. 'Wolf Lake' takes its time to unfold and establish its characters. At a swift 88 minutes, the film has a nice balance and flow to it so that nothing feels rushed or too much of a logic leap. From the first time we meet Steiger's Charlie we know he's a man in command. He's arrogant, confident, and belittling to people just for fun. His dislike for David Huffman's shaggy David is evident from the start. He didn't need to know David was a deserter to not like him, he already hated young men who looked just like David. Charlie's obsessive hatred could only grow from there. Finding out David deserted after his tour was just the thing to turn Charlie's hatred into pure rage. It's irrational for sure, but powerful feelings, especially those surrounding the loss of a loved one are often irrational. It's a believable slide into madness.

Taken as a whole, 'Wolf Lake' is a tense, dramatic, horrific, and exciting thriller. It's fairly predictable, it doesn't take much to guess where this film will ultimately go, but it's the journey that makes it worth it. Steiger is a fierce standout for this film, it's clear the man was going for the Oscar gold here. Picture his character from 'In the Heat of the Night' dialed up to 11. One could argue his portrayal of Charlie as over the top, but 'Wolf Lake' wouldn't be nearly as good or effective as it is if he had been in the least bit understated. That isn't to say that the rest of the cast, David Huffman, Robin Mattson, and in particular, Jerry Hardin as Wilbur aren't good in their roles, they absolutely are great, but this is Steiger's show. 'Wolf Lake' is a show well worth watching.

'Wolf Lake' arrives on Blu-ray courtesy of Kino Lorber and their Studio Classics label and is pressed onto a Region A BD-25 disc. The disc is housed in a standard Blu-ray case with alternate poster artwork on the reverse side. The disc opens directly to a static image main menu with traditional navigation options.

As the original theatrical release of 'Wolf Lake' wasn't very well received and resulted in multiple cuts of the film and a brief retitling of 'The Honor Guard,' the 1.78:1 1080p transfer supplied for this Blu-ray release wears 36 years of neglect on its sleeve. From the very first frame, one can tell that this film hasn't been well cared for over the years. The opening panning establishing shot is full of jitter that actually made me a bit nauseous forcing me to look away. Thankfully, once the opening titles have left and the camera stops panning the jitter settles down a bit, it's still present in some scenes. Film grain is intact and provides some good detail levels for the period clothing and fine facial features, the rest of the image doesn't enjoy the effects a traditional restoration effort would have provided. Colors are a little bleached out at times, almost dipping into vinegar in some places as blue skies look almost bright white, flesh tones can appear a nondescript pasty color, browns can appear almost red and deep forest greens look like a grey-olive shade. The print sourced for this transfer showcases some speckling throughout and some obvious staining. Black levels are okay and provide some depth, but they're not all too impressive. There are some genuinely very good moments with this transfer where colors appear natural, details are strong, and there is some nice black level balance, but this film could have used a dedicated restoration effort to balance everything out for a more pleasing and consistent appearance.

While the image quality for 'Wolf Lake' leaves something to be desired, the English DTS-HD MA 2.0 audio mix is a real winner. There is an impressive sense of quiet space around the elements that gives the film a sense of isolation. As the film progresses and the situation for the characters becomes more and more tense, this quiet isolation gives the film the sense that there is no escape for anyone. Dialogue comes through clean and clear without any issues of overlap or distortion, which is especially important when Steiger starts yelling as he's prone to do in his films. Scoring by Ken Thorne is subdued giving the track's lower tones active and engaged. Free of any hiss, pop, or  other age-related issues, this is a fine audio track for a good thriller.

Interview with Jerry Hardin and Richard Herd: (HD 10:17) This is actually a really wonderful interview with two old friends. They met on the film and became friends so they have a lot of great stories to share about the production, working with each other, the rest of the cast, and shooting in the Mexican mountains to stand in for the Canadian Rockies.

Interview with Producer Lance Hool: (HD 11:21) Producer Lance Hool provides an interesting look at the film and how it came together but because of timing, it wasn't received well and the studio was scared off from a wide release after two bad test screenings.

'Wolf Lake' is a heck of a great little pot boiler of a thriller that was largely forgotten about or dismissed when it was originally released. Rod Steiger delivers another commanding performance as a fierce and menacing man. As a pulpy thriller, the film's subtext elevates it from being a run of the mill piece of exploitation movie theater filler. Kino Lorber brings 'Wolf Lake' to Blu-ray with a troubled image transfer, a solid audio track, and a couple decent little extra features. I loved the film, but my conflicts with the image presentation keep me from calling this one a true recommended Blu-ray release. However, the film is very good so this disc is at the very least worth a look.

Sale Price 18.89
List Price 29.95
Buy Now
3rd Party 10.27
In Stock.
See what people are saying about this story or others
See Comments in Forum
Previous Next
Pre-Orders
Tomorrow's latest releases