The Adventures of Buckaroo Banzai Across the 8th Dimension: Collector's Edition

Brilliant brain surgeon Banzai (Weller) just made scientific history. Shifting his Oscillation Overthruster into warp speed, he's the first man ever to travel to the Eighth Dimension and come back sane! But when his sworn enemy, the demented Dr. Lizardo (Lithgow), devises a plot to steal the Overthruster and bring an evil army of aliens back to destroy Earth, Buckaroo goes cranium to cranium with the madman in an extra-dimensional battle that could result in total annihilation of the universe! Starring Peter Weller, John Lithgow, Ellen Barkin, Jeff Goldblum, Christopher Lloyd, Lewis Smith , The Adventures of Buckaroo Banzai Across The 8th Dimension  has developed a loyal cult following since its release in 1984.

'The Adventures of Buckaroo Banzai Across the 8th Dimension!,' commonly simplified to 'Buckaroo Banzai,' is an odd production that is very much of its time. From start to finish, the movie screams 80s, opening with a yellow text crawl giving unsuspecting viewers background information on the eponymous hero, played memorably by Peter Weller ('RoboCop'). Most hilarious is the clothing — turned collars, vibrant pastel colors, loose neckties accessorized with Members Only jackets — which is wonderfully hip and stylish for the period but conveniently only worn by our protagonist and his riffraff band of assistants/men-at-arms known as the Hong Kong Cavaliers. Of course, Jeff Goldblum's cowboy character named New Jersey stands out with his ten-gallon hat and cow-print chaps, but his fashion faux pas is forgiven because he's the new member. Then, there's the stylized hair, as in Ellen Barkin's Penny Priddy, puffed up by Aqua Net, like Clancy Brown's Rawhide, or simply sporting the permed mullet while rocking the saxophone on stage.

None of this is meant to disparage the beloved cult classic — it's a treasured favorite of this viewer — but rather to celebrate the cleverness behind its production and Earl Mac Rauch's script. While our versatile hero and his misfits of multidisciplinary experts embody the height of fashion, their rivals , a reptilian bug-like alien race from the mysterious Planet 10, are the polar opposite. Commanded by a wildly over-the-top John Lithgow in an unconventional performance as Dr. Emilio Lizardo, who is possessed by the alien Lord John Whorfin, the creatures called Lectroids dress like grandpa on his way to church — stuffy, plain-colored business suits that lack personality and style. In their human form, they hunt for a strange device called the "oscillation overthruster," their hair puffs in curly tangles, giving actors like Christopher Lloyd (a year before sporting another wacky hairdo) an outlandishly kooky charm. However, Lithgow's cartoonish but genocidal leader, determined to return to home and break his army free from their eighth dimension prison, is a raving lunatic with the hair, outfit and goofy walk to match, making him one of the movie's hilarious highlights. 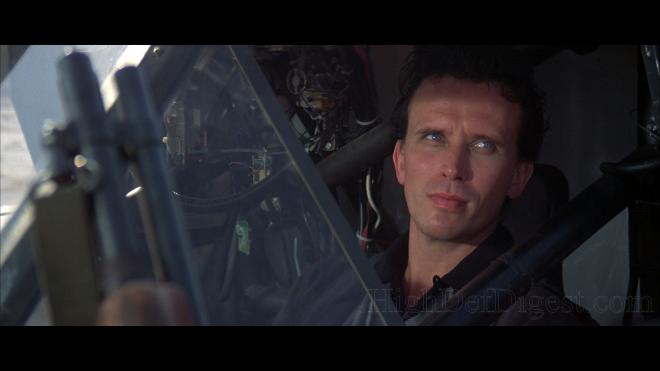 This oversimplified method of distinguishing the good guys from the bad — tough, good-looking gents versus the zany, kid-friendly villains with the requisite booing and hissing by the audience — is a product of its time. At the same time, the production, directed by 'Big Trouble in Little China' and 'Home for the Holidays' writer W. D. Richter, is also ahead of its time, going largely unappreciated during its original theatrical run. Similar to what Lucas was doing with his original 'Star Wars' trilogy and Spielberg with the 'Indiana Jones' films, Richter and Rauch were creating their own serial adventure that mixed science fiction, fantasy and comedy into a hodgepodge of absurdity that, according to one interview with Lithgow, would take an hour to explain. Taking inspiration from classic pulp magazines, like Doc Savage, and the days of Saturday afternoon film serials, like Flash Gordon and Buck Rogers, the gonzo film delights in a screwball atmosphere that never takes itself serious, but wholeheartedly embraces its Bohemian silliness.

Even back when it originally hit theaters in 1984, the quirky 'Adventures of Buckaroo Banzai' came out of left field, a sci-fi comedy with a complicated plot that was somewhat difficult to describe. No one really knew what to do with the idea of alien beings from a distant planet trapped inside a parallel dimension. Part of the movie's lasting admiration comes from how deeply embedded it was to the decade's zeitgeist.

Shout! Factory brings 'The Adventures of Buckaroo Banzai Across the 8th Dimension!' to Blu-ray as a two-disc Collector's Edition package under the distributor's Scream Factory line. The Region A locked, BD50 disc is housed inside the normal blue case with a DVD-5 on the opposing panel, brand new reversible cover art and a cardboard slipcover. The DVD only contains all the same special features from MGM's 2002 special edition release while the Blu-ray offers a brand-new set of bonus material.

At startup, the disc goes to a static screen with a menu selection along the bottom and the film's signature theme music playing in the background. Unfortunately, according to the Shout! Factory website, the exclusive, limited edition poster of the newly commissioned artwork has already sold out.

Even though he wasn't granted a brand new remaster of the original elements, the source used has aged extraordinarily well, making for a great-looking 1080p/AVC MPEG-4 encode that'll have Buckaroo's loyal followers cheering.

The video comes with a couple moments of poor resolution and scenes softer than others, but those moments are related to film transitions and edit dissolves, which can be easily forgiven. White specks, light flecks of dirt and very faint vertical lines occasionally rear their ugly head. But again, they are most often linked to those above scenes and all the more evident during special effects sequences and matte painted shots. Speaking of which, Buckaroo's transition into the HD dimension has also made those once-upon-a-time state-of-the-art visual effects pretty obvious and dated, which is a not a mark against our hero and don’t distract from the rest of the presentation. Only, that it's worth mentioning and actually add another level of nostalgic enjoyment. Overall, the transfer shows excellent definition and resolution with an attractive, thing layer of grain, giving it an appreciable film-like quality. Background information is distinct and plainly visible while clothing, buildings and foreground objects are detailed, and facial complexions appear healthy and revealing.

Presented in its original 2.35:1 aspect ratio, the video displays spot-on contrast with clean, crisp whites throughout, and black levels are accurate  with excellent shadow details. I detected one or two instances of murkiness in the darkest portions of the frame, but on the whole, the picture looks great with good depth. Colors benefit the most, showing a bright, rich palette with lots of vivid primaries, which complements the movie's silly humor. Secondary hues also shower the presentation with a welcomed, rejuvenated glow that make the dated outfits pop and giving the slimy alien reptiles a rust-brown look. In the end, this is the best the cult classic has ever looked on home video.

Per usual, Shout! Factory offers another cherished favorite with two DTS-HD MA options: the first being a surround sound upmix while the second is a stereo track, which is closer to the original design. For the most part, the former makes for a surprisingly good listen, extending various subtle ambient effects to the side speakers effectively. The quirky, offbeat music of Michael Boddicker also bleeds into the surrounds with ease, creating an amusingly engaging soundfield. The mid-range is clean with good clarity between the various frequencies, and vocals are very well-prioritized in the center. Only issue worth noting is that the overall track is at a noticeably lower volume than normal, making things seem oddly thinned out and stretched while also affecting the low bass, which is somewhat lackluster and not very audible.

The stronger of the two tracks is definitely the stereo lossless mix, which frankly, is always my preferred listening option when it comes to certain movies. Imaging is much fuller and feels more naturally spacious with lots of background activity occupying entire the soundscape. With a balanced channel separation and convincing movement across the screen, dynamic range is also more extensive with detailed clarity during the loudest action sequences. Delivering a great deal of warmth and fidelity throughout, the overall volume is right where it should be while maintaining excellent dialogue reproduction and tonality in each character's unique performance. Boddicker's whimsical and recognizable score spreads across with noteworthy distinction and separation in the orchestration, and a noticeably heftier, more responsive bass provides the entire design and music with better weight and presence.

'The Adventures of Buckaroo Banzai Across the 8th Dimension!' is an odd production that is very much of its time. Starring Peter Weller, John Lithgow, Jeff Goldblum, Ellen Barkin, and Christopher Lloyd, this quirky, offbeat 1984 film is a sci-fi comedy mishmash in the tradition of Saturday afternoon film serials. Though it bombed in theaters, over the decades it has garnered a loyal cult following that now celebrates its absurd sensibilities. The Blu-ray from Shout! Factory comes with an excellent audio and video presentation that easily bests any previous home video editions. Featuring a new set of special features along with the same assortment seen in the 2002 DVD, the overall package is recommended for any fan proud to display it in their cult collection.

Sale Price 78.79
Buy Now
3rd Party 74.81
In Stock.
See what people are saying about this story or others
See Comments in Forum
Previous Next
Pre-Orders
Tomorrow's latest releases