Adrenaline-pumping chases and deadly double crosses electrify this twist-filled thriller. After a botched heist, thieves and ex-lovers Jack and Karen (Mark-Paul Gosselaar and Claire Forlani) are targeted by Eddie (Bruce Willis), a murderous crime boss. To escape with their lives, Jack and Karen must steal a cargo of precious gems. But when the job goes down, allegiances are betrayed and lines are crossed as Jack, Karen, and Eddie face off in a fateful showdown.

Something's been happening in the film world, something terrible that I never thought I would see. One could chart this course of destruction back to the 2010 film 'Setup.' I am referring to the unfortunate downward spiral of Bruce Willis. What the heck happened? Sure, 80s/90s action giants like Van Damme and Steven Seagal fell into the pit of direct to video low budget scuzz, but that's because they didn't have any range. Stallone fell into that trap for a brief period, but at least had some genuine talent and a couple of big franchises to rebound with. Bruce Willis, on the other hand, is a mystery to me because the man could do comedy, he could do drama, he didn't have to go for the quick paycheck of a routine action movie cameo. Unfortunately, Bruce took the money and ran with 'Precious Cargo.' I could understand why Mark-Paul Gosselaar of 'Saved by the Bell' fame would do a movie like this, but Willis only drags his name down further into the muck with this trite, irritating, and uninspired action/heist/comedy.

Jack (Mark-Paul Gosselaar) is a thief and a con man at the top of his game. He doesn't need to go after regular folks for their cash, he goes after major international players who found their wealth through illegal means. Sort of a Robin Hood type guy, only he doesn't give anything back to the poor. But that's okay, he's a likable enough guy. He's trying to improve a budding relationship with a young vet named Jenna (Lydia Hull) and edge into happy retirement away from the action. To prove he's an animal lover, he borrows his sniper partner Logan's (Jenna B. Kelly) dog. Everything Jack has tried to build for himself goes up in smoke when his old girlfriend and fellow thief Karen (Claire Forlani) shows up out of the blue six months pregnant. The same amount of time since Jack last saw Karen.

It turns out Karen is in a spot of trouble with international bad guy Eddie (Bruce Willis). Karen somehow managed to get a hold of Eddie's entire hit list of lucrative jobs. Now Eddie is out for blood. Karen figures if they pull a fast job for some diamonds, they'll fence the stones, pay off Eddie, and still have enough bread left over to live like kings. The only problem is Eddie's number two badass hitman Simon (Daniel Bernhardt) is hot on Jack and Karen's trail. If Jack is going to make it out of this nightmare alive he's going to have to pull together a crack crew of fellow thieves, pay off Eddie, and finally once and for all, get the scheming and backstabbing Karen out of his life for good. 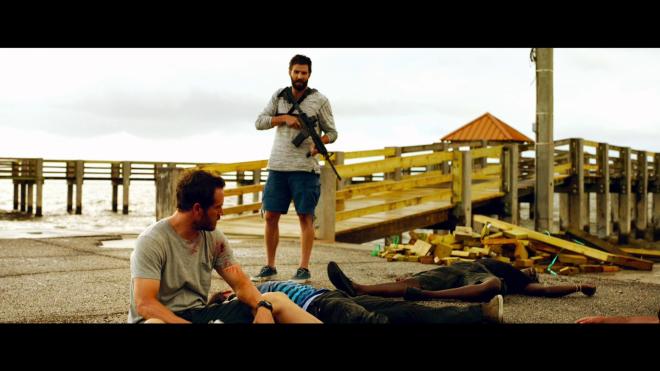 While that plot breakdown sounds pretty good on paper, woof this movie is a dog. When you're trying to build some sort of action/comedy/thriller your execution had better be pitch perfect. Sadly, this movie is woefully inept in virtually every way possible. From poor casting to a terrible script to mind numbingly stupid plot conveniences, 'Precious Cargo' is just a really, really bad movie. It's not even bad in the way that you can sit back and enjoy the badness, it's just numbingly dumb. From the first big action boat chase sequence to the irritatingly simplistic ending, the movie is just bad. I readily admit to being something of a connoisseur of schlock cinema, I proudly have an ever growing library of Cannon Films, but 'Precious Cargo' can't even raise itself to those low standards for entertainment.

About the only genuinely decent aspect of this movie is Mark-Paul Gosselaar who appears to actually be trying to make the best of things. In full "Zach Morris" mode, he's charming, has genuine comedic timing, and manages to pull off some decent action stunts. Second to him is "Taller Van Damm" Daniel Bernhardt. For once Bernhardt actually has some kind of character to play with dialogue and everything! Also, the man hasn't lost a step in the ass kicking department. Claire Forlani… I don't even know where to start with her because she's just not right for the part at all. Jenna B. Kelly is fun as Logan, but her dialogue - as well as the rest of the supporting cast's - is eye rolling bad making her a bit irritating whenever she's not shooting bad guys at 500 yards out. Finally, we come to the big guy himself, Bruce "I guess I can't say no" Willis. He may not be completely off the A List of actors yet, but after recent entries like 'Extraction,' 'Vice,' and 'Marauders,' Willis now finds himself in the ever growing white pages directory of famous actors willing to just phone it in. For how little he does and for how much time he just spends talking on a phone, they may as well just set up a camera next to Willis' backyard hot tub so they can film him relaxing in a pool of puréed $100 bills reading random dialogue off a teleprompter. It would be more entertaining to see that then watching him in these terrible cash-in roles. At least we have 'Die Hard: Year One' to look forward to, right?

I don't like to savage movies, especially low budget movies like 'Precious Cargo,' but this one broke my willpower. This movie was just bad from start to finish. It thinks it's clever when it's not. It think's that witty dialogue is made up of people repetitively dropping F-bombs multiple times into every sentence. At the end of the day, 'Precious Cargo' plays like a bad R-rated episode of 'Burn Notice' only it doesn't have the charm and charisma of Bruce Campbell to save it.

'Precious Cargo' arrives on Blu-ray thanks to Lionsgate. Pressed onto a Region A BD50 disc, this disc comes housed in an eco-friendly Blu-ray case with identical slip cover artwork as well as a voucher for a Digital HD copy of the film. The disc opens to trailers for other Lionsgate direct-to-video titles before arriving at the main menu featuring traditional navigation options.

For a direct to video, moderately-low budget production, 'Precious Cargo' actually has a pretty pleasing, well detailed 2.40:1 1080p transfer working for it. This movie makes great use of it's various Gulfport, Mississippi locations. The detail levels showcase a lot of the local scenery, facial features, and the modest production design work. Black levels are nicely inky with controlled contrast allowing for some measure of depth to come through. Colors are stable and natural allowing for plenty of primary pop - especially ocean blues. Aside from some slight banding in a couple places, the image is free of any compression artifacts. It may not be the most spectacular transfer ever, but considering its origins, 'Precious Cargo' looks pretty darn good on Blu-ray.

With an English DTS-HD MA 5.1 mix, 'Precious Cargo' skirts by with a serviceable audio mix. The biggest problem with the film is its tendency to try and have witty comedic dialogue during loud action sequences. These moments aren't balanced too well making the dialogue difficult to hear. Not that you really need to hear these moments, still, since the cast is making the effort to be funny and build characters, it'd been nice to hear what they're saying. Moments that focus on just dialogue or scenes that are just about the action fair better and don't have any issues. Sound effects and atmospherics work pretty well at filling scenes with a sense of space. All around this audio mix gets the job done.

The Making of 'Precious Cargo': (HD 14:37) This is your pretty typical EPK, cast and crew interview material. Brief, only a little informative.

Cast/Crew Interviews: (HD 43:54) Interviews with Mark-Paul Gosselaar, Claire Forlani, Jenna B. Kelly, Writer/Director Max Adams, Producer/Co-Writer Paul Seetacheitt, and Producer Scott Mann. Taken as a whole, there is some pretty good material here, they cover a lot of similar ground, what got them interesting in the project, shooting, etc. Sadly, no Bruce Willis interview, I would have loved to see his apathy answering these questions.

As a fan of junk food cinema, I was actually kind of looking forward to 'Precious Cargo.' The trailer actually looked pretty decent, and it had the allure of Bruce Willis phoning in yet another small bad guy role. Sadly, the final movie doesn't measure up to the trailer. It tries to be fun, but even the energy of Zach Morris can keep this movie afloat for long. Lionsgate delivers the movie onto Blu-ray in decent form with a strong image transfer, a serviceable audio track, and some decent interview material for extras. That said, I just can't recommend the movie. If you're at all curious, it's a rental.

Sale Price 9.5
List Price 14.99
Buy Now
3rd Party 2.93
In Stock.
See what people are saying about this story or others
See Comments in Forum
Previous Next
Pre-Orders
Tomorrow's latest releases