Unlock the mysteries of the year's most spellbinding film from the producers of Crash and Sideways! Oscar® nominees Paul Giamatti and Edward Norton lead an all-star cast in this "stunning" film (USA Today) that conjures an exhilarating blend of suspense, romance and mind-bending twists. The acclaimed illusionist Eisenheim (Norton) has not only captured the imaginations of all of Vienna, but also the interest of the ambitious Crown Prince Leopold (Rufus Sewell). But when Leopold's new fiancé (Jessica Biel) rekindles a childhood fascination with Eisenheim, the Prince's interest evolves into obsession...and suddenly the city's Chief Inspector (Giamatti) finds himself investigating a shocking crime. But even as the Inspector engages him in a dramatic challenge of wills, Eisenheim prepares for his most impressive illusion yet in this "mesmerizing" (Entertainment Weekly) and "beautifully acted" (Good Morning America) film that "teases you until the very end!" (The New York Times).

In filmmaking, as in magic, timing is critical. When a magician performs a sleight-of-hand trick, the illusion won't have quite the same impact if the dove doesn't fly out of his sleeve just as he gestures for the big reveal. A few seconds too late, and the audience's awe turns to skepticism and disdain. Likewise, all the hard work a filmmaker pours into his project can be easily thrown into jeopardy if the studio releases it at the wrong time into an unreceptive market. One of the biggest follies in this regard is to premiere a film in close proximity to another movie on the same subject. When that happens, the audience's attention is divided. Typically, either one film will greatly overwhelm the other, or both will underperform at the box office. Somehow, this happens time and again in the industry – two asteroid-disaster movies, two volcano movies, two movies about the O.K. Corral, two CGI animated movies about talking ants – all released head-to-head, and for what gain?

The fall of 2006 brought us the battle of the dueling magician movies: Christopher Nolan's star-powered 'The Prestige' with Hugh Jackman and Christian Bale, versus Neil Burger's small-scale independent production 'The Illusionist'. Both are period-piece mystery thrillers about famed stage magicians caught in webs of murderous intrigue. Nolan's film arrived with waves of buzz that largely transmuted into disappointment and anger from audiences who felt cheated by its deus-ex-machina plot twist in the final reel. Burger's film, meanwhile, faced lower expectations and generally left viewers satisfied. It enjoyed a healthy run in limited release. In terms of raw numbers, 'The Prestige' outgrossed 'The Illusionist' $53 million to $40 million; but relative to their original budgets, the smaller film was considered the greater success.

Edward Norton stars as Eisenheim the Illusionist, a renowned performer on tour through early 20th Century Europe. A stop in Vienna finds his long-lost childhood sweetheart (Jessica Biel, far too young to be Norton's contemporary) engaged to a politically-ambitious and hot-tempered prince (Rufus Sewell) who isn't much impressed by Eisenheim's act. Believing himself a master of deception, the magician initiates a dangerous affair with the girl right under the nose of the prince, who, ever paranoid and suspicious, has already ordered his Chief Inspector (Paul Giamatti) to keep tabs on the man. The Inspector happens to be an amateur magician fascinated by Eisenheim's show, and is left morally conflicted by his admiration for the illusionist and the orders given by his abusive employer. This all leads to murder, revenge, and perhaps a surprising revelation or two.

In the final analysis, 'The Illusionist' boils down to a rather simple mystery story with a central plot twist that is clever but not entirely unforeseeable. It lacks the philosophical depth of the more intellectually ambitious 'Prestige'. On the other hand, its plot machinations are always logical and consistent. Even those caught off guard will likely feel that its final reveal is less of a cheat. Personally, I found 'The Prestige' a very flawed film, but one that holds up extremely well to repeated viewings once some of the initial disappointment has worn off and its secrets can be explored in greater detail.

I've watched 'The Illusionist' twice now. Initially, I doubted that the film offered much that I hadn't discovered in the first viewing. In a sense, that's true. However, what works in the movie's favor are an appealingly stylized period atmosphere and strong performances from the cast. During this second screening, I found myself surprised at just how easily I got caught up in its drama all over again.

I enjoy both of the competing magician movies. Neither one entirely traps me in its spell, but each provides a solid night of entertainment worthy of revisiting from time to time.

20th Century Fox Home Entertainment released 'The Illusionist' on DVD back in early 2007, but failed to issue a corresponding Blu-ray at that time. Fans of the film may have sought out an Italian Blu-ray from Eagle Pictures. That disc was region-free and offered a nice high-def picture, but had only lossy Dolby Digital 5.1 sound. Its video supplements were also encoded in PAL standard definition format, which is not compatible with many American Blu-ray players. Still, all in all, it was a solid disc.

It's taken three years, but Fox has finally gotten around to issuing its own new edition of 'The Illusionist' as a Blu-ray + DVD 2-disc set. The Blu-ray starts playback immediately and has no main menu screen, just a pop-up menu that only offers audio options. (Ironically, this is the exact opposite of the Italian Blu-ray, which had only a DVD-style main menu and no interactive pop-up menus.) There are no extra features at all on the Blu-ray disc; all supplements are found only on the DVD in the case. 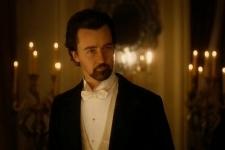 'The Illusionist' has very stylized cinematography designed to emulate silent films and period photographs. The color palette has been intentionally desaturated and is dominated by burnished hues and amber flesh tones. In addition, the flashback sections of the narrative go a few steps further by adding deliberate flicker and vignetting. With that in mind, the 1080p/AVC MPEG-4 transfer provides a very faithful viewing experience. The movie was never meant to have that "through a window" crystal clarity of material shot on HD video. It's meant to have an aged, old-timey appearance, which is captured well here.

Despite the diffuse photography, the high-def transfer has a very strong sense of textural detail. Close-ups are often quite revealing of skin pores and facial hair. If anything, they are perhaps too revealing of the many fake mustaches and beards worn by the cast.

Film grain is usually faint in appearance. In a few scenes, the actors have a sort of glossed-over look, but that appears to be more a combination of heavy makeup, soft lighting, and gauze filters over the camera lens than any fault of Digital Noise Reduction. The disc doesn't have the mushy or plastic look associated with heavy DNR.

The picture's black levels are very deep. Perhaps too deep. There are many dark scenes in the film featuring actors wearing dark clothing in dimly-lit settings. Many of them have indistinct shadow detail. Whether that's intentional or not, I'm not certain. I wouldn't say it's seriously distracting, but it did stand out to me.

The Blu-ray has been compressed onto a single-layer BD-25 disc. Generally, the digital compression quality is adequate. However, some blocky artifacting is evident around the 1 hr. 18 min. mark. The disc also has a recurring problem with color banding in contrast gradients, especially during the love scene in Chapter 9. I noted a similar issue in my review of the Italian Blu-ray, but said at the time that it was minor. This time, it stood out to me as much worse (even more so on the Italian disc than this one). I've changed projectors in the meantime, and my new unit may be emphasizing the issue. But I also checked both discs on a separate monitor and still saw some (though perhaps not as severe) banding there. So, it would appear that there's definitely something wrong with the disc in this regard. How much it stands out may vary depending on your specific viewing hardware.

As noted, I dragged the Italian disc out for comparison again. I found the banding worse there. I would also say that the new American Blu-ray is slightly sharper and just a bit better overall. The difference is very slight, though. I don't think the improvement is dramatic enough to require an upgrade just for video quality alone. Both discs are very good.

Whereas the Italian disc is slightly letterboxed to a 1.85:1 aspect ratio, the Fox disc is presented in an open matte 16:9 transfer – despite indications to the contrary on the packaging. The difference is negligible and doesn't affect the compositional intent of the photography. 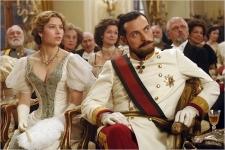 Where the new American Blu-ray certainly exceeds the older Italian disc is sound quality. The movie's soundtrack has been upgraded to lossless DTS-HD Master Audio 5.1 format. (The disc also has a redundant Dolby Digital 5.1 track.) The difference is most audible in the Philip Glass score, which here has more heft and body, and fills the room better. Dialogue is also less bright.

This is still not a particularly action-packed sound mix. Bass usage is moderate, and surround envelopment is limited at best. The few gunshots in the movie deliver a nice bracing kick, however. If not an auditory rollercoaster, 'The Illusionist' is nevertheless a very nice-sounding movie, and the lossless track offers a notable improvement in fidelity.

All bonus features are found on Disc 2, which is simply a pressing of the original DVD release from 2007.

The biggest mystery about 'The Illusionist' is what has taken Fox so long to release it on Blu-ray. The film is an engaging period thriller with compelling performances and atmosphere. The high-def disc looks and sounds pretty great overall, despite a few flaws. Unfortunately, other than the commentary, the other bonus features are worthless. Still, this is a worthy recommendation.

Sale Price 10
List Price 11.99
Buy Now
3rd Party 4.18
In Stock.
See what people are saying about this story or others
See Comments in Forum
Previous Next
Pre-Orders
Tomorrow's latest releases