In the south of Laos, an American doctor (Rossif Sutherland) becomes a fugitive after he intervenes in the sexual assault of a young woman. When the assailant's body is pulled from the Mekong River, things quickly spiral out of control.

It's a real bummer when you're watching what appears to be a pitch-perfect thriller and you're getting into it, you're along for the ride only for the flick to completely run out of steam. In those moments you can almost feel the filmmakers and talented people involved just run out of ideas and the film then just plods along towards an unsatisfactory conclusion. That is sadly the case with Writer and Director Jamie M Dagg's 2015 film 'River' starring a very impressive Rossif Sutherland.

John Lake (Rossif Sutherland) is a man who doesn't know how to give up. As a member of a Doctors Without Boarders team helping rural people in southern Laos receive proper medical care, he takes his job seriously. When a patient is near death or has flatlined, he refuses to give up on them even when there is no hope. After losing a patient, he's ordered to take some time off to destress and focus himself. Traveling to the north on a holiday, he finds a nice out of the way bar where he can drink, eat, and get his head straight. When he spots two Australian tourists giving too many drinks to a couple of young local girls, he speaks up. Later when he comes across one of the men after sexually assaulting one of the girls, he gets involved - and things go too far. After John beats the man to death, the girl wakes up and believes John was the one who attacked her. Now with the police after him for murder and rape, John is forced to go on the run. His only hope is to get to Thailand, but he has hundreds of miles and a river to cross before he can catch a flight out of Bangkok.

'River' had me hooked. The film starts out strong, we learn about our main character, his obsessive tendencies and his need to help people quick and dirty. We see him taking care of sick patients, struggling to make his interpreter understand the importance of his patient completing their treatment. Then we see him helping people wounded in a bus accident. When one of them flatlines, he refuses to stop resuscitation efforts even when he's been ordered to the next patient. After those very quick moments, we know who John Lake is and we understand why he acts the way he does later in the film when events go bad. He's a man of action who doesn't give up. It's because his character is so compelling that when the film peters out midway through the second act, it's hard to accept that the film essentially stops with about thirty minutes left to go. 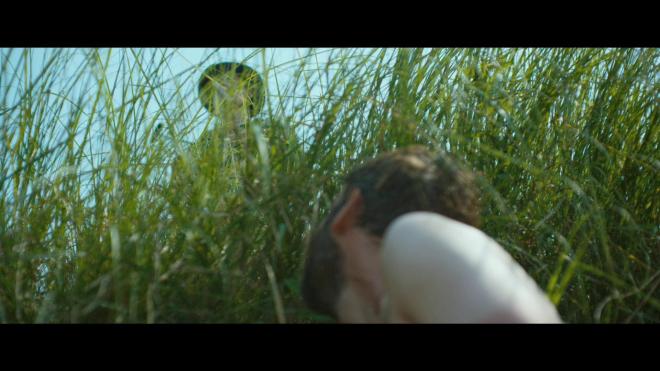 The shame of how 'River' comes to a screeching halt and then lumbers to an ending is that Rossif Sutherland is so damn good in this film. He's easily relatable, he has an impressive emotional range, and you're right there with him. When he goes to his boss at the clinic played by Sara Botsford or turns himself in at the American Embassy - you know it's because he's caught in an impossible situation and must think on his feet. All he wants is for someone to hear his side of things and believe him. But when people are powerless to help or outright believe he's guilty, you're completely on board with his need to keep running.

When John stops running, and the film enters a strange and out of place area of international politics and extradition processes, it feels like you accidentally flipped channels to a different movie. One minute you're watching a solid updated version of 'The Fugitive' and the next you're looking at a toned down 'Midnight Express.' One moment you're sitting on the edge of your seat wondering "Will he make it? Is he going to survive" and the next second you're asking "Where's his lawyer? Shouldn't he have a lawyer? When does the prolonged trial scene start?" It's a dynamic shift that never really comes together in a fitting way. It's like watching two really good halves of two different movies spliced together. In their own respects, they work but they don't work well together. I was loving the first half of this film, I truly thought I was going to see a great underground thriller with an amazing conclusion. Sadly that conclusion doesn't really come. Ultimately, 'River' is worth watching, but tempered expectations may be required. Also, Rossif Sutherland is great in it, and I do hope he emerges out of the family shadow and gets to take on some bigger roles in the future.

'River' arrives on Blu-ray courtesy of Well Go USA. Pressed onto a Region A BD25 disc, the disc opens with previews for other Well Go USA titles before arriving at an animated main menu with traditional navigation options. The disc is housed in a standard Blu-ray case.

'River' features a pleasingly well detailed and colorful 2.35:1 1080p transfer. Shot throughout Laos and Thailand, the film is beautiful to look at. This transfer provides of fine details to fill the image. Midranges and close ups look great, but it's the wide establishing shots with tons of scenery that steal the show. Colors favor a yellowish earth tone while allowing primaries to have plenty of presence and natural flesh tones. Black levels are fantastic and inky with plenty of shadow separation during the many night sequences so there is plenty of depth without any crush issues. There is some occasional banding in a few spots, but they're pretty insignificant when compared to the rest of the image. All around this is another impressive release from Well Go USA.

'River' arrives with a strong English with Lao and Thai DTS-HD MA 5.1 audio track. The film is largely dialogue driven on the front end, but once the film gets rolling the surround elements fill up nicely and the score by Troum and Grayson Matthews work well to fill the track. Even during the quieter moments, there are plenty of background sounds and ambient effects working to give the scene a sense of space and dimension. Imaging also works well as there is some great sound work to convey movement. Levels are set just fine, although it may be a bit difficult to hear some of the whispering and you may need to adjust volume a bit, but not too much. All around the track is clean and without issue.

'River' is 2/3 of a great movie with an underwhelming final act. The film had set an amazing pace, has a relatable character played wonderfully by Rossif Sutherland and was genuinely a tense and exciting thriller. It's still a watchable film, it's just not as satisfying as it could have been. Well Go USA brings 'River' to Blu-ray with a fantastic A/V presentation. Sadly extra features are virtually non-existent beyond a trailer. At the end of the day, 'River' makes a pretty good rental.

Sale Price 5.99
List Price 14.99
Buy Now
3rd Party 3.97
In Stock.
See what people are saying about this story or others
See Comments in Forum
Previous Next
Pre-Orders
Tomorrow's latest releases