A young woman in a small Kansas town survives a drag race accident, then agrees to take a job as a church organist in Salt Lake City. En route, she becomes haunted by a bizarre apparition that compels her toward an abandoned lakeside pavilion. Made by industrial filmmakers on a modest budget, the eerily effective B-movie classic Carnival of Souls was intended to have “the look of a Bergman and the feel of a Cocteau”—and, with its strikingly used locations and spooky organ score, it succeeds. Herk Harvey’s macabre masterpiece gained a cult following on late-night television and continues to inspire filmmakers today.

Like many budding horror enthusiasts, I came across Herk Harvey's 'Carnival of Souls' more or less by accident when perusing the aisles of my local video store during those tender formative years of preadolescence. It was the same summer I also discovered another low-budget, black-and-white B-movie classic with a rabid cult following: George A. Romero's 'The Night of the Living Dead.' Of course, I was much too young at the time to fully appreciate the pair of massively influential films, to understand and regard them as the innovatively ground-breaking pieces of cinema they truly are. Over the years since that initial viewing and as my tastes continued to develop, particularly when learning 'Twin Peaks' creator David Lynch regarded the film as a personal favorite, I slowly learned to see its value and contribution to the genre as a whole. Today, the 1962 cult horror classic also ranks high on my list of the best in the genre, treasured as a splendid example of independent filmmaking and of what can be accomplished with a very limited budget that challenges its makers to be more inventive and unusual.

Part of its curious oddness comes from the fact that, from a more objective point of view, the production is to some extent pretty amateur and unintentionally comical. It's the sort that would easily fall under the "so bad, it's good" category because it often shows the filmmakers were working with limited resources and funds. This is most evident in one of the early sequences after a friendly drag race ends with three young women plummeting to their watery deaths from a rickety bridge. As police and local residents fish for the vehicle and the girls, the dubbing and automated dialogue replacement (ADR) is badly done because the voices don't even come close to matching the lip movement of actors, which understandably will give rise to giggles in some viewers. And yet, Harvey manages to pull his film out of deep water, both figuratively and literally, the moment Candace Hilligoss as the shy and timid Mary walks out the river to the surprise of everyone, quickly quelling those chuckles from moments earlier. This is the production's major turning point, not only in terms of plot development but also for viewer expectations, making it clear Harvey is a capable filmmaker plunging his audience into an unfamiliar world where the rules of reality don't apply. 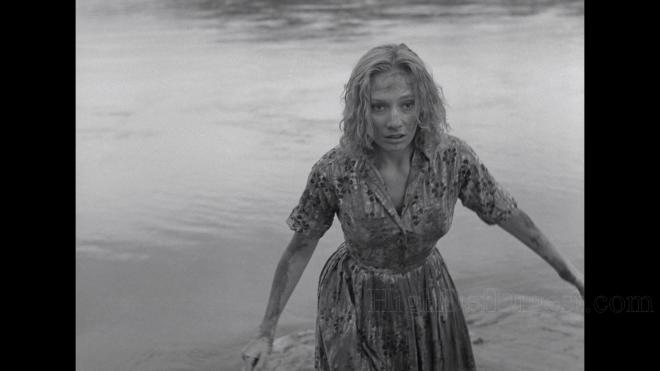 If there's any noteworthy flaw in the well-written script which Harvey co-wrote with John Clifford, it would have to be their failure in making the film's conclusion less obvious, effectively ruining the story's surprise twist ending. But thankfully, the shocking revelation is not the point of this stylized chiller. It's really about the journey building up towards that final twist that ultimately matters, which is where the film's ingenuity and success resides. From the instant Mary walks out the water in a confused daze, audiences are submerged into a strange dreamlike state where sound comes in and out at the oddest and most unexpected moments. Mary doesn't really notice it until she moves to Utah for a job as a church organist and she's shopping at the local mall. Suddenly, the world falls to complete silence and she's invisible to everyone. Complementing the unusual sound design is the amazing photography of Maurice Prather providing a nightmarish surreal quality. The sometimes startling appearance of the pale, ghostly stranger, played by Harvey himself, makes him a strikingly creepy presence and gives the abandoned, dilapidated Saltair Pavilion that beckons to Mary an ominously macabre personality. Of course, this all aided by the haunting pipe organ music of Gene Moore, providing a spine-chillingly gothic ambiance.

It's also worth mentioning, as well as respecting, the origins of 'Carnival of Souls' as part of its lasting admiration and praise, making the behind-the-scenes story of its creation equally interesting. Everyone involved, aside from the cast, worked for the Centron Corporation in Kansas. For those of us old enough to remember, Centron is known for producing short industrial and educational films, the sort we watched as children in elementary school teaching kids about a variety of social issues, from sexuality and proper hygiene to lessons in the sciences and humanities. Without having access to the type of resources and special effects wizardry commonly seen in a Hollywood production, Harvey and company had to devise clever camera tricks, like special lighting and a mirror to reflect the pale man's face on Mary's car window. Along with other spookily cool camera movements the filmmakers developed from their time at Centron, this kind of creativity also had them placing more emphasis on a darkly brooding atmosphere over jump scares, and it's all the better for it, leaving a lasting impression that has lived with me since childhood.

This Blu-ray edition of Herk Harvey's 'Carnival of Souls' comes courtesy of The Criterion Collection (spine #63) on a Region A locked, BD50 disc and housed in their standard clear keepcase. Accompanying the disc is a foldout, poster-size pamphlet with new artwork featuring the pale face man and an insightful essay entitled "Thinkin' like That, Don't It Give You Nightmares!" by author and film critic Kier-La Janisse. There are no trailers or promos before being greeted by the distributor's normal static menu screen and options.

According to the accompanying booklet, the high-def transfer of the cult horror classic was scanned in 4K resolution from the original 35mm camera negative, which appears to be in exceptional shape and condition. The results are an absolutely astounding, reference quality AVC MPEG-4 encode that is a drastic improvement over previous presentations, giving B-cinema enthusiasts the very best the film has ever looked and the opportunity to watch as if for the first time. Presented in its original 1.37:1 aspect ratio, the video displays a thin veil of ultra-fine grain throughout, providing the presentation with a lovely film-like quality. Brightness levels are superb and lush, rendering lavishly deep blacks that are inky rich and profound. The image displays remarkably dynamic gradations, which provide it with a convincing and perceptible depth of field. Contrast, too, is in magnificent condition and pitch-perfect with crisp, brilliant whites and sharply intense highlights that make the picture pop.

Immediately noticeable is the transfer's often stunning clarity and resolution, allowing fans to really enjoy Maurice Prather's beautiful photography to be the main focal point. Many of the creepily baroque architectural nuances of the rickety, neglected Saltair Amusement Park are clearly visible and oddly gorgeous to look at, adding to the narrative's nightmarishly surreal nature. Viewers can see each imperfection, crack, scratch and sign of age inside and outside the dilapidated building while the lettering on signs, books and bottles are crystal clear and legible. The fabric and elaborate design patterns on the couch, curtains and Mary's fashionable dresses are distinct. You can practically pluck some of the loose fibers and tiny fuzzies off her clothes in several scenes, and one can also clearly make out the stitching in the various suits and the unironed wrinkles of pants and shirts. While individual hairs of both the living and the dead extraordinarily well-defined, every pore, tiny bump and the light peach fuzz on Candace Hilligoss's face is made plainly visible.

One thing worth pointing out is the very visible vertical line showing up at around the 48-minute mark, but thankfully, this one minor defect is not enough to distract from the film's overall enjoyment.

Using the same 35mm camera negatives, Criterion engineers did a splendid job preserving the original monaural soundtrack. Despite being entirely contained in the center channel, the uncompressed PCM track comes with a terrific acoustical presence and fidelity, despite it feeling somewhat narrow and limited. The ADR work is also noticeably awkward and near comical, at times, but dialogue is excellent nonetheless with great clarity and intonation throughout.

Also worth noting is the design greatly lacking in terms of background activity, but much of that is a deliberate choice to reflect Mary's psyche and for creating a surreal, spooky atmosphere. However, the few bits of action shown, most of which take place inside the pavilion, come with clean, discrete effects, and the mid-range is fairly dynamic with appreciable extension. Of course, much of this is only evident due to Gene Moore's eerily haunting pipe organ music. Although there's no LFE to really speak of, the lossless mix still arrives with the adequate and appropriate bass.

In 'Carnival of Souls,' a young woman is haunted by spooky apparitions of a ghostly stranger after surviving a drag race accident and eerily beckoned by an abandoned lakeside pavilion. Made by industrial filmmakers on a very limited budget, the strikingly macabre film is an effective chiller with a nightmarishly surreal and darkly gothic atmosphere that continues to inspire and infect the imaginations of genre fans. The Blu-ray from The Criterion Collection arrives with a stunning audio and video presentation that easily surpasses all previous home editions. Along with a terrific assortment of new supplemental material to enjoy, the overall package comes highly recommended. A must-have in any cult collector's B-movie library!

Sale Price 27.99
List Price 39.95
Buy Now
3rd Party 19.63
In Stock.
See what people are saying about this story or others
See Comments in Forum
Previous Next
Pre-Orders
Tomorrow's latest releases