Peter Falk and Alan Arkin make for a hilarious dream team in this beloved American sidesplitter. Directed by Arthur Hiller from an ingenious script by Andrew Bergman, The In-Laws may at first seem like a generic meet-the-parents comedy, as Arkin’s mild-mannered dentist suspiciously eyes Falk’s volatile mystery man, whose son is engaged to his daughter. But soon, through a series of events too serpentine and surprising to spoil, the two men are brought together by a dangerous mission that takes them from suburban New Jersey to Honduras. Fueled by elaborate stunt work and the laconic, naturalistic charms of its two stars, The In-Laws deserves its status as a madcap classic—and has continued to draw ardent fans in the years since its release.

"Did we hit the little boy on 6th avenue?"

Sometimes a movie doesn't have to have the best story ever written in order for it to work. Sometimes, all you need are great characters played by fantastic actors with genuine chemistry. Arthur Hiller's 1979 action comedy 'The In-Laws' may have a clever script with a fun and wildly entertaining plot, but it's the presence of two amazing comedic actors Peter Falk and Alan Arkin that makes this film what it is. When you have talent like that, giving fearless unrestrained comedic performances, you don't need the best story, you just need to sit back and let these guys do what they do best.

It's just four short days before the wedding and Dr. Sheldon Kornpett DDS (Alan Arkin) and his wife Carol (Nancy Dussault) haven't met the father of the man marrying their daughter Barbara (Penn Peyser). They've met the mother Jean (Arlene Golonka) and the soon to be son-in-law Tommy (Michael Lembeck), and they seem to be okay people. However, the patriarch of the family Vince Ricardo (Peter Falk) has remained elusive, always having to travel to far off locations or take emergency meetings. Since his own family doesn't even know exactly everything Vince is up to, Sheldon's nerves are a little on edge. But, the man says he's coming to dinner and all concerns should be buried then and there.

The dinner proves to Sheldon that Vince is up to no good. The same way Sheldon can tell when his patients lie about brushing their teeth, he knows Vince is a liar. He doesn't know what exactly his future in-law has to hide, but it can't be anything good. But, he promised his daughter he'd make the effort, so when Vince turns up at his office asking him out to an insanely early lunch, he reluctantly goes along. Little did Sheldon expect to end up being shot at, in possession of stolen $500 bill printing plates, or mixed up in an international counterfeiting conspiracy with the erratic and seemingly insane Vince claiming to be part of the CIA. 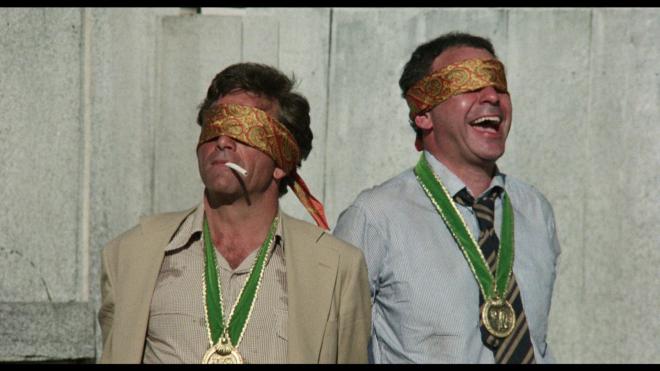 If the plot of 'The In-Laws' sounds at all familiar, it could well be because you're conjuring up some sad memories of the failed 2003 remake starring Michael Douglas and Albert Brooks. This is a case where a bad remake can do a lot of damage to the original film. There should never have been an attempt to remake 'The In-Laws.' Comedy lightning was already caught in a bottle once with Alan Arkin and Peter Falk, there was no need to try and catch it again. This isn't to say that the original 'The In-Laws' was the most award-worthy or original film to date, there are countless versions of this sort of story out there, but this film directed by Arthur Hiller and written by Andrew Bergman is quite possibly the funniest.

What makes 'The In-Laws' work so well is that there aren't really any obvious setups for jokes. There are gags, sure, but these goofball madcap moments don't feel forced or heavy-handed. They feel like a natural progression of a stressful scenario that builds to the point of hilarity. One moment you're more or less sitting on the edge of your seat as Sheldon is being chased by a bad guy with a gun down a fire escape, the next you're laughing as the pair run in circles around a cab like two children with Sheldon trying not to get shot. The whole film works this way, the comfortable and content Sheldon being tossed into one uncomfortable and stressful situation after another by Vince. When you're not outright laughing at what you're seeing, you're giving a solid delighted chuckle. The film is never boring nor does it overstay its welcome. When a gag is done, there isn't any padding to kill the joke, the film just moves on to the next compromising situation for Sheldon and Vince.

The long and the short of why 'The In-Laws' works so well is because of Peter Falk and Alan Arkin and how well the pair work off of each other. It's interesting if you really look at the film, the great actors who play their family, the colorful characters made up of hit men, an art obsessed South American dictator, a crazy cab driver, and Chinese pilots are entirely incidental. They're not really there to further the plot in any real way, they're there to find one more reason for Arkin and Falk to play off each other, and it's hilarious. There's a point in the middle of the movie where Arkin's Sheldon has essentially been kidnapped by Falk's Vince and is stuck on a flight to Honduras. Falk is playing things cool as a cucumber, as if this is an everyday occurrence for him, while Arkin looks like a man at the end of his rope, under so much stress that he's about to snap, and yet he's doing everything he can to be polite to the Chinese pilot that is pointing out a delicious recipe in an old Better Homes and Garden article. There are many more moments like that throughout the film. I desperately want to point them out and comment on how funny they are, but I know that will spoil the joke, you're just going to have to take my word that 'The In-Laws' is a hysterical comedy that takes its time to set itself up for some great laughs. You can tell these two actors loved working with each other and it's that chemistry that makes 'The In-Laws' a comedy classic.

'The In-Laws' arrives on Blu-ray courtesy of The Criterion Collection. Pressed onto a Region A BD50 disc, the disc comes housed in a standard clear Blu-ray case with a booklet containing photos as well as an essay by Stephen Winer. The disc opens directly to a static image main menu featuring traditional navigation options.

Inside the booklet, Criterion includes a note about the extensive restoration work that went into creating a 2K scan for this 1.85:1 1080p presentation. From dirt and debris removal to adjustments made to fix instances of flicker and jitter, this must have been an exhaustive effort because the final product is beautiful. Fine film grain is retained throughout and maintains a visible but stable presence. It's never noisy nor does it appear out of place and provides some wonderful detail levels. Close ups and middle shots tend to look the best with some wide shots looking a tad soft, but there are some pretty amazing establishing shots and the wide view during the climax of the film looks fantastic - again comedy spoilers so I can't be too specific to the point, but the little details made me laugh a lot. Colors maintain that 70s color pallet that is heavy on the dull browns and tans, but primaries have tons of pop and presence to them without adversely affecting flesh tones. Black levels and shadows are inky with plenty of separation providing the image a wonderful sense of depth. Considering the work went into this restoration, there are very few age-related issues and there aren't any compression artifacts like banding to speak of. All around this is a pretty stunning looking little movie.

'The In-Laws' comes packed with a pitch-perfect English LPCM mono track. 90% of the comedy of this film hinges on the dialogue and thankfully, everything is clean and easy to hear without any interference from the sound effects or the playful score by John Morris. Even as a standard mono track there is plenty of dimensionality on display, imaging is a bit muted, but you have a clear sense of where things are coming from in relation to any particular scene. Like the image, this audio track apparently underwent its own extensive restoration effort to remove instances of hiss, pops, cracks, and other age-related anomalies. The results speak for themselves as this is a beautiful mix that sounds natural and present at all times.

Audio Commentary: For this fantastic track that has been held over from the original DVD release, Director Arthur Hiller, screen writer Andrew Bergman, along with Peter Falk and Alan Arkin are all on deck. it's a fun commentary as together they cover a lot of ground from the script to shooting and making the comedic elements look and feel natural.

'In Support of 'The In-Laws': (HD 34:07) This feature contains brand new interviews with character actors James Hong, Nancy Dussault, Ed Begley Jr., and David Paymer talk about how they got involved in the film. It's great to hear how their approach to comedy by playing their parts deadly serious so no one was ever intentionally funny.

Alan Arkin Interview: (HD 24:07) This new interview with Arkin. It's interesting how Arkin opens this interview stating that he never thought he'd be good at comedy or accepted in a comedic role even though he was among the first crew of Second City and was great at improvisational improv comedy. He also goes into a lot of detail about his early career and playing more serious roles before being comfortable with comedy.

'When you need a good laugh, it's great that classics like the original version of 'The In-Laws' is available. It's a hilarious film with two amazing comedic actors Peter Falk and Alan Arkin doing what they do best. If you've never seen it, add it to your watchlist. If you're already a fan, the good news is that this Blu-ray release from Criterion knocks it out of the park. The film looks and sounds amazing and the extra features are plentiful, informative, and also give you a couple good laughs. At the end of the day, 'The In-Laws' is highly recommended.

Sale Price 21.56
List Price 39.95
Buy Now
3rd Party 12.08
In Stock.
See what people are saying about this story or others
See Comments in Forum
Previous Next
Pre-Orders
Tomorrow's latest releases