Robert Mitchum and Curt Jurgens star in this gripping World War II drama about an American destroyer and a German U-boat stalking each other at sea. As both men try to outthink and outmaneuver each other, the chase becomes a deadly chess game in which any mistake can bring instant defeat and death. Winner of the 1957 Academy Award for Best Special Effects, The Enemy Below marked the directorial debut of actor Dick Powell.

One of the things that I find particularly interesting about war films is that they don't absolutely have to be about specific historical battles in order for them to be worthwhile. Sure, movies like 'Tora! Tora! Tora!,' 'Patton,' or 'Battle of the Bulge' are perfectly great examples where the battle was recreated on screen. While these films provide historical context and entertainment value, sometimes it's the films that don't aim to recreate specific events that work just as well if not a little better. They're not bound by history or real-life counterparts for their characters. Dick Powell's thrilling 1957 film 'The Enemy Below' starring Robert Mitchum and Curt Jurgens is a prime example of how to make a fictionalized war film that captures all of the intensity of a real battle and still serve as a tribute to the men who fought in World War II.

On the surface of the South Atlantic, Captain Murrell (Robert Mitchum) searches for German U-boat submarines. As a former merchant marine, Murrell still carries the wounds of a previous U-boat attack that sank his last ship. Now with the battle hardened USS Haynes in his command, he has a crack crew and incredible firepower to handle any encounter. Even as an expert seaman who has had firsthand combat experience with U-boats and knows how they maneuver, the crew of the Haynes is still a little uneasy and worry their new commander may be unfit for duty. Everything changes when the Haynes detects a German U-Boat and they experience what their captain is capable of.

Deep under the sea, Kapitän von Stolberg (Curt Jurgens) is a battle-hardened veteran of naval warfare. He's sunk his share of vessels and has the complete trust of his crew. So when they detect an American destroyer following them, they're confident their captain has what it takes to defeat the enemy. As both Stolberg and Murrell deploy their usual tricks to outwit one another, they soon learn they're an even match. For every attempt Stolberg makes to shake the stalking USS Haynes, Murrell is able to counter it and keep on the U-boat's tale. Likewise, whenever Murrell thinks he's got the U-boat dead to rights, Stolberg has one more trick up his sleeve. As with any prolonged hunt with two experienced predators, the role of "cat" and "mouse" will change on a dime and the outcome of the battle will hinge on brains and cunning rather than brute force and firepower. 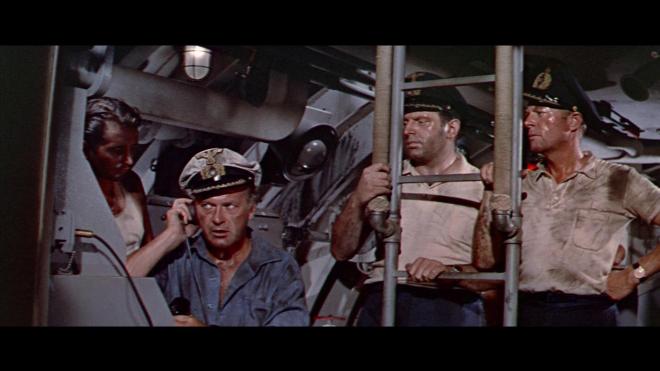 'The Enemy Below' works because it isn't simply a run-of-the-mill battle-heavy war film, it's also an expertly crafted thriller. Written by Wendell Mayes, this film starts out almost like a documentary of sorts and feels almost like a newsreel. The opening is essentially an introduction to both Mitchum's Murrell and Jurgens' Stolberg and their respective crew. We learn that Murrell is one-hundred percent invested in the cause and is ready to fight any German naval vessel to the death. In contrast, we learn that Stolberg is hardly towing the traditional Nazi line. If anything he has total contempt for Nazis. The reason he fights, the reason he commands his vessel the way he does is to ensure that his crew survives the war. You feel that both men have seen enough pain and death in their time and are responding to it differently. Murrell has something to prove and redeem himself after past events and Stolberg is in it to survive.

While we're also getting all of this time to understand our two leading characters, their different ideologies, and their respective crews, we're also getting an incredibly elaborate introduction to the ships they command. Through subtle little bits of exposition, we learn the fighting capabilities of the USS Haynes as well as her limitations. At the same time, we're also learning about the German U-boat, her sneak attack abilities as well as her weaknesses. Because of this, 'The Enemy Below' can feel a tad stale for the first half hour or so, it's all very procedural "this is how this works, that is how that works" material. But once the story gets going, once the Haynes detects that U-Boat, the hunt is on and all of that seemingly pointless material comes back and works its way into the story and Director Dick Powell never misses a beat keeping the film moving quickly and constantly building suspense.

Topping off the impressive story execution are two impressive performances from Robert Mitchum and Curt Jurgens. Mitchum was always a reliable leading man who was adept at action with a softer personable side to him. In 'The Enemy Below' he brings all of that ability to his Murrell, a man who believes he's right in his actions and abilities but knows the stakes and the consequences of the slightest error. On the flip side is Jurgen's Stolberg. It was great to see Jurgens as a commander of a U-boat or any other German military post who wasn't portrayed like a cartoonish nut job. He's a measured and reserved commander who does his duty, even though he doesn't like who he's fighting for. His war is personal, it's on that boat and in the water around him, it's not a war of nations. When you put the two men together you see a great respect for their characters. While they're certainly enemies, they grow to understand one another through their actions and it creates an interesting dynamic of respect and honor towards one another. It's because of this that I find 'The Enemy Below' to be my personal favorite submarine movie. Sure there are others out there with a little more action and fun to them, but this film's heart is in the right place and that goes a long way towards winning me over.

'The Enemy Below' arrives on Blu-ray courtesy of Kino Lorber and their Studio Classics label. Pressed onto a Region A BD25 disc, the disc comes housed in a standard Blu-ray case. The disc opens directly to a static image main menu featuring traditional navigation options.

'The Enemy Below' arrives on Blu-ray with a transfer that could best be described as "well, it's better than the DVD." Unfortunately, it would appear that not much restoration work went into this 2.35:1 1080p transfer. Fine film grain is visible allowing for some pleasing detail levels to come through. The grain looks even through most of the film, but during some of the special effects sequences where model ships were used the grain can become notably noisier. Colors also have an unfortunate tendency to fluctuate without ever really settling into a natural look. Blues like the ocean or the sky for example, can shift from nice deep colors to lighter pale blue-grey tones from scene to scene. The print sourced for this transfer has also seen better days as there are a number of scratches and speckling is always apparent. Black levels are pretty decent without boosted contrast levels so there is at the very least, an appreciable sense of three-dimensional depth to the image. All that said, most of the issues with this image have been apparent since the Laserdisc release. While this is most certainly a more recent master than the one used for Laserdiscs, this film is in serious need of some restoration work. While you can say it looks better than it has on any other home video format to date, you can't quite shake the feeling that it could be looking a whole lot better. It's serviceable, but nothing amazing.

Thankfully, 'The Enemy Below' comes with a strong English DTS-HD MA 2.0 audio mix. Dialogue comes through crisp and clear without any interference from sound effects or scoring. Sound effects sound natural, perhaps a little canned during the battle sequences, but when you're in the engine room of the U-boat or in the crew quarters there is a nice balance to the work that sounds life-like. As this was originally a mono release, the sense of imaging tends to be a bit front-loaded, but there is still an appreciable sense of direction and space. Levels are just fine as I never felt the need to adjust volume once the big action scenes got going or segued to something quieter and conversational. There is a little bit of hiss here and there, but nothing so severe as to put you off the moment. All around this is a pretty great audio track for this release.

'The Enemy Below' is a classic war film that happens to be a tense and pitch-perfect thriller. Mitchum and Jurgens are in their prime as tactically proficient adversaries. The film moves fast and never slows right up to the exciting conclusion. Kino Lorber brings the film to Blu-ray with a serviceable if underwhelming video transfer and a fantastic audio track. Extras are a collection of trailers. I'm a huge fan of the film and am glad to have this movie on Blu-ray, but fans wanting a fresh restoration may have a harder time justifying upgrading discs. To that end, I'm calling this one as worth a look. The film is absolutely worth the price of admission if you don't already own a copy for yourself, just keep your image expectations in check.

Sale Price 15.87
List Price 29.95
Buy Now
3rd Party 15.87
In Stock.
See what people are saying about this story or others
See Comments in Forum
Previous Next
Pre-Orders
Tomorrow's latest releases