"Directors never go down with their films, they get like 10 more tries!"

It's nice to sit back and watch something that just knows what it is, and does what it does well. Ever since the LEGO movies have started to come out, I questioned the necessity of every single superhero or cartoon character ever created getting the "LEGO treatment." While I continue to love building the toy sets, I never really saw the point of the various direct to video movies. When I sat down to 'LEGO Scooby-Do! Haunted Hollywood' I was expecting some shoddy animation, cheesy voice acting, and a trite story that would only entertain a very small child. It wasn't long into this new LEGO movie that I had to serve up some humble pie because 'LEGO Scooby-Doo! Haunted Hollywood' is actually a lot of fun. This little movie manages to pull together the best aspects of LEGO and Scooby-Doo to create a little flick that should be fun for the little ones and parents alike.

Famed cowardly detective K9 Scooby-Doo (Frank Welker), his perpetually starving buddy Shaggy (Matthew Lillard), the mystery hungry Velma (Kate Micucci), the vapid Daphne (Grey Griffin) and the dense Fred (also Frank Welker) have just solved yet another mystery. With the no good slimy sea creature unmasked, it's time to get Shaggy and Scooby some food to satisfy their constant hunger pangs. When they stop off at their favorite burger joint, Shaggy and Scooby unwittingly win a hamburger eating competition and earn the whole gang an all expense paid trip to Hollywood's famed Brickton Studios!

When they get there they find tinsel town could use a little brightening up. The once prestigious horror producer Chet Brickton (James Arnold Taylor) is about to lose his troubled studio to the smarmy real estate developer Atticus Fink (JB Blanc). You see, the studio has been haunted by the ghost of horror icon Boris Carnac, the Man of 999 Faces! Ever since Carnac's death, the studio has been losing money. Now Brickton's only chance to save his studio is to get one last movie made - but the crew has run off! With Fred in the director's chair and the rest of the gang filling in as actors and crew, they're going to have to finish the movie and solve the horrifying mystery - that is if Scooby and Shaggy can leave the craft services table alone! 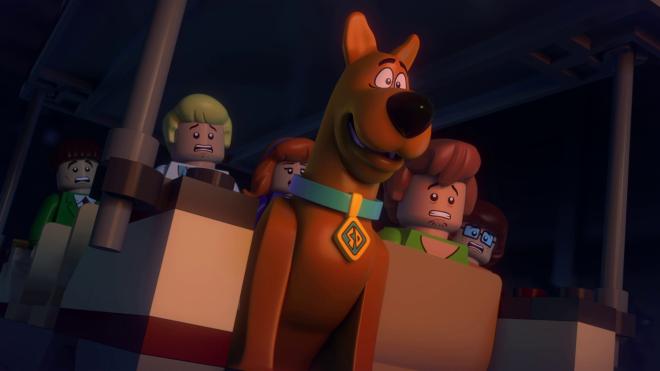 I was honestly expecting 'LEGO Scooby-Doo! Haunted Hollywood' to be quite a slog to get through, but thankfully I was wrong. This little outing turns out to be a pretty solid average episode of 'Scooby-Doo! Where Are You?' given the LEGO treatment. Of course, if you've ever seen any episode of the old Hanna-Barbera cartoon, then you know what to expect with the story here. It's easy to spot who the culprit is and the mystery isn't all that mysterious. That said, I found the LEGO touch added a bit of charm. When the big unmasking happens, Velma, of course, removes the character's entire head rather than the mask. When the characters walk or run, their feet sound like plastic. It's charming.

The story itself may not be enough to sustain a full 75 minutes, it can feel a bit stretched at times, but it should satisfy the little one's and keep adults in the room entertained. The voice cast headed by the always awesome Frank Welker and Matthew Lillard keep the energy alive. The animation may not be up to snuff compared to the incredible 'LEGO Movie,' but for a direct to video release, it isn't half bad and preserves all of the charms of the other LEGO video releases. It may not be the greatest little movie ever made, but it provides the right amount of clever distracting entertainment that I can see a number of families finding some value in having this one on their shelf.

'LEGO Scooby-Doo! Haunted Hollywood' arrives on Blu-ray from Warner Bros. Home Video in a two-disc, Blu-ray and DVD set. The Blu-ray is a Region Free BD25 disc. Both the Blu-ray and the DVD come housed in an eco-friendly Blu-ray case with identical slip cover, each disc getting their own cradle. Also included in this set is a LEGO Scooby-Doo figurine as well as an Ultraviolet Digital HD voucher slip.

Considering this is a direct to video release, the 1.78:1 presentation of 'LEGO Scooby-Doo! Haunted Hollywood' isn't half bad. The animation isn't as glamorous as your average theatrical release, but it holds its own. Colors are bright and cheery giving that classic Hanna-Barbera look and feel but with a computer animated LEGO touch. The image has a strong sense of depth to it giving the LEGO brick animation stylings a notable 3-D touch to it. The renderings aren't quite photo-realistic, you're not going to be convinced that your favorite toys have come alive, but the look and the feel are alive and well and provide its own sources of humor. Considering its intentions, it's hard to find any fault with the presentation of 'LEGO Scooby-Doo! Haunted Hollywood.'

Packed with an English DTS-HD MA 5.1 mix, 'LEGO Scooby-Doo! Haunted Hollywood' is a relatively flat, front loaded stereo presentation. The voice acting and dialogue are crystal clear as it should be, but there isn't much in the way of atmosphere and space for this little movie. Sound effects are pretty basic for the most part, and the score works well for the movie, but they don't really round out the surround channels. The sides are engaged only in small subtle ways, like the sound of the characters walking for instance, but there just isn't much surround activity to warrant a full 5.1 mix. A dedicated 2.0 track would have worked just fine and you wouldn't have missed a thing. That said, this audio mix works for what this movie is, but don't expect to be wowed by it.

Scooby-Doo and LEGO Too: (HD 8:49) Brick artist Nathan Sawaya shows you how to build the Mystery Machine, it's not from original parts as you can regularly see the instructions in front of him, but I'd wager this short extra was meant for the kiddos who have the set themselves.

Scooby-Doo's Sleuthing Secrets: (HD 6:38) Writer/Producer Jim Kreig answers some kid's questions. It's a cute little extra but nothing too informative.

Vintage 'Scooby-Doo! Show' Episode The Headless Horseman of Halloween: (SD 24:17) It's awesome watching the old episodes again, makes me feel like a kid before school started and I'd get my morning fix, especially this classic episode, even though I was never a big fan of Scooby-Dum

Vintage 'What's New Scooby' Episode Fright House of a Lighthouse: (SD 21:13) It's a fun episode in its own way, but I wasn't ever a fan of these newer episodes.

'LEGO Scooby-Doo! Haunted Hollywood' turned out to be a pretty fun outing. It may be a tad long for your average Scooby-Doo adventure, but the clever script and the LEGO animated stylings keep it fun for kids of all ages. Warner Brothers Home Video has done a solid job bringing this little movie to Blu-ray with a solid A/V presentation, a couple extra features, and a few individual episodes pulled from various incarnations of the show. If you're looking for some way to entertain the kiddos in your home without driving yourself nuts at the same time, 'LEGO Scooby-Doo! Haunted Hollywood' is recommended fun!

Sale Price 16.51
List Price 18.94
Buy Now
3rd Party 2.48
In Stock.
See what people are saying about this story or others
See Comments in Forum
Previous Next
Pre-Orders
Tomorrow's latest releases